As time passes so does the roster of playable characters increase in the Apex games, but no one is equal to one another, with Respawn making changes every month it’s becoming kind of an unusual thing to witness in Battle Royale games because one day a Legend could be S tier and the other a B tier, so keeping that in mind this tier list is about Season 9 Legends.

What makes this game special is that each one has different abilities hence some counter others, or some can escape really fast and some others have powerful ultimates, this tier list is going to be based on how efficient each Legend is, which ones are the best at eliminating their opponents and how good they are at supporting their team.

Below you will see each tier starting from S, each Legend, and why they are at their respective tier.

Also, keep in mind that this is our personal opinion based on our experience with the game and lastly, just because some Legends are in lower tiers that will not decide how good you will be in the game, this is clearly based on the amount you have spent to learn how to play each individual Legend by yourself.

Bloodhound used to be in a very lower tier rank in previous seasons around 4 and 5 because their tactical had a really short range and was practically useless, but when they added the extra range they instantly became S tier simply because in combination with their ultimate which was already a big advantage with fights, from long range to close range.

Gibraltar was and still remains to this day an unforgiving beast, he has the best defense in the game requiring a lot of firepower to bring him down and with his tactical and ultimate it will either force a team to keep their distance or push him hard and take the risk, there is no between with Gibraltar, it’s either all or nothing.

Revenant is one of those assault type Legends that are extremely helpful with their team and when Respawn removed his Death Totem radius he became an S tier in no time, with his silencing tactical and fast crouching movement not only can he sneak up on unsuspecting enemies but also has the utility to provide extra survivability to his team.

Bangalore is easily on the A tier spot and will stay here probably forever since she is the most balanced Legend out of everyone else, facing little to no changes to her kit at all she is a decent assault legend but also provides some utility for her team with her tactical, a classic all around solid legend.

Wraith used to be an S tier at the early years of the game’s release but as time went on players easily found out that she had the smallest hitbox and was extremely hard to hit, combine that with her tactical which was basically a “free get out of jail card”, made the devs nerf her and rebalance her multiple times, but she still remains in A tier because she can still pull some good plays and provide decent utility for her team.

Octane was a beast in season 8 and easily could be in S tier but now with the extra “balancing” the developers made for him he dropped one rank, although he has a jump pad that provides some kind of utility for his teammates there’s not much else he can do other than the fact that he moves fast and is one of those legends that’s really easy to miss.

Another fallen from the glory legend, Pathfinder used to be a killing machine in the early days of the game, with a really low cooldown on his tactical he was basically a robot Spiderman grappling around and escaping anytime he wanted, now with the nerfs he still has a pretty high spot in the tier list but not as he was before, and his ultimate provides good utility for his team.

Valk is the latest addition in this season and she has already hit the A tier rank not only because of her offensive capabilities but also her useful maneuverability and utility, she can fire down on her enemies with her devastating tactical and provide an ultimate that can benefit the whole squad, the only downside with this legend is her slow animation transition and her jet fuel but this is understandable since it has been created for balancing reasons.

Lifeline was an A tier in Season 8 simply because of the fact that she could keep on reviving one of her fallen teammates indefinitely while popping a shield in front of them making it impossible for the enemies to shoot through, thus they were either forced to push or shoot her first, but now with Season 9 that shield is no longer there and since she’s only providing utility for her team without any serious combat skills she made it into the B tier.

Mirage is very easy to understand but really hard to master, he’s in the B tier because other than bamboozling enemies and make them waste their bullets, the only utility he has is to revive and respawn his teammates while being invisible which sometimes doesn’t work that well since there’s still a sound coming out making it somewhat easy for the enemy to track.

Loba could be lower in this list but with the recent update she has become more viable and with her tactical buffed she could finally provide better firing support for her team, as for her ultimate even if it has been increased for 30 seconds it’s still very useful for her and her team to get two items of their choice while basically becoming an infinite ammo dispenser.

Horizon could easily stay at the top S tier rank but with the recent nerf in Season 9 it will be very difficult to place her somewhere other than B, her tactical has reduced movement now which will make her a flying target rather than a means of healing or escaping fast like she used to do, and this is the only utility she provides for her team as well.

Fuse started off as a weak Legend and would be in the C tier rank but the devs took notice and buffed him a little bit making him more viable now in Season 9, they reduced his cooldown and added one more stack in his Knuckle Cluster, Fuse unlike other Legends though has no utility to provide to his teammates he is full-on offense and that’s why he will remain in B tier for now.

Crypto is by far one of the hardest Legends to master and since you need to basically control two characters each time you play with him, you have to be extremely careful of any enemies coming behind you, so first you need to find a good spot to hide and then using your drone which will take a lot of time and might create a big distance between you and your team if there is no decent communication between you and them.

Although Rampart has been buffed a little bit she is a slow character like Crypto and even though she is a defensive Legend she has the most offensive capabilities, but for using her skills she has to calculate positions to make her Amped Covers and her Sheila count.

Wattson is one of those Legends that mostly provides utility and needs full coordination with her team thus making her really hard to play, her tactical can dissuade enemies from pushing sometimes but can easily be destroyed specifically if they shoot one of two connected pylons it will make it accessible for all enemies which is why it is recommended to always make triangles, as for her ultimate which is more useful she can negate any throwing ordnances such as grenades and abilities from Legends but the downside is that her team can get that disadvantage as well.

Lastly, we have Caustic which we were thinking about placing him in the E tier rank but we said he can still hold a gun and well, his tactical is a decent doorstop, other than that his gas has been nerfed so much that most enemies, especially those with fast movement do not even care about the damage they will take from it, and what’s more to consider is that if you are left with a small amount of health and they are good they will not even think about twice of pushing you, Caustic’s ultimate is again pretty much not that great, it works more as a repellant rather than dealing enough damage and the only way to achieve a knockdown is to leave the enemy with around 20-30 health.

Thankfully there aren’t any Legends that fall in the E or F tier rank yet and we hope that it will be staying like this.

Here’s the full image of the Tier List so you can take a quick look. 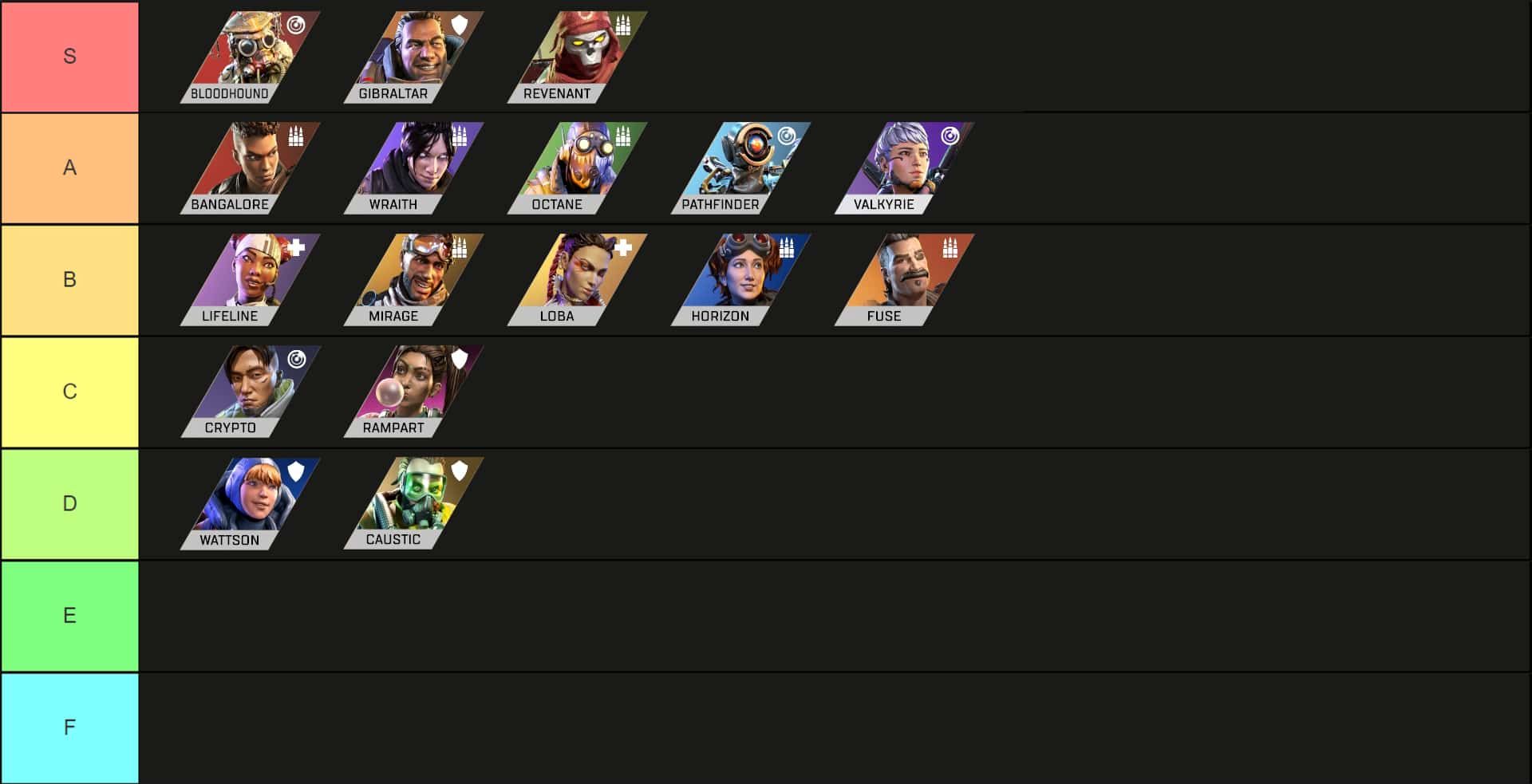