In the sea of great Fallout New Vegas mods, here's our humble list of the mods, that you should definitely take a look at!

Fallout: New Vegas is considered by many to be the best game in the series, and one of the best Western RPGs ever made. For a game that was developed in just 18 months, Obsidian Entertainment did an amazing job.  Over the years, the game has gathered a strong fan following, and with it naturally a large collection of mods. On a rough estimate, there are more than 20,000 mods for F: NV, varying from weapon mods, gameplay, and UI improvements to total conversions.

So, without further ado, here is the list of mods, that can greatly improve and enhance your gameplay experience. 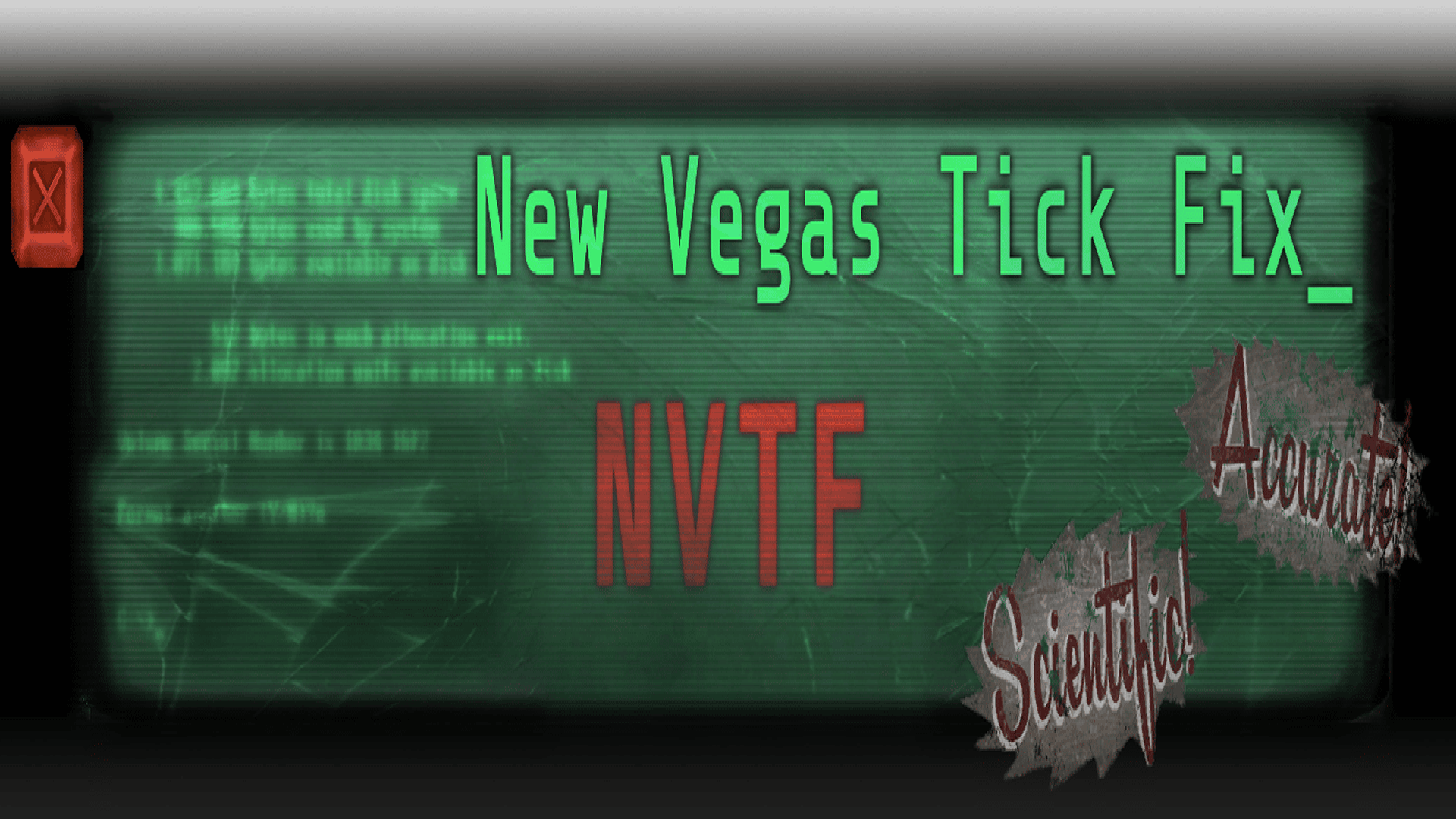 The latest fix allows the game to run on modern hardware, making performance better and fixing stutter. This fix also works on Windows 10, and on most modern hardware, so it’s a must-have if you plan to play the game, vanilla or otherwise. 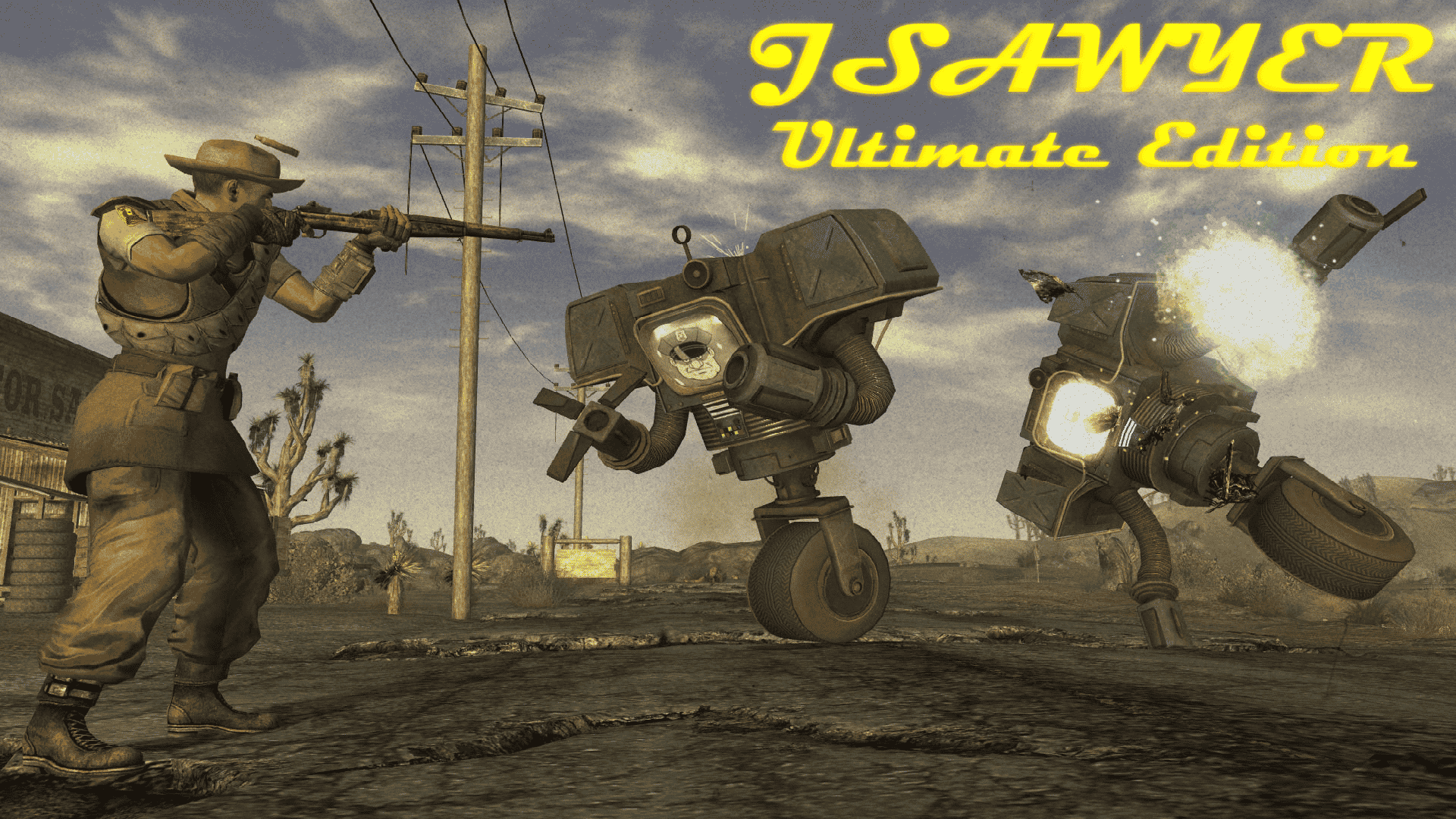 There aren’t many mods out there that are created by the original designer of the game. Since, Fallout: New Vegas was developed over the period of 18 months, the game on its release was sadly riddled with bugs. One of the essential mods for F: NW, is the Jsawyer’s Ultimate editions, which smooths over the rough edges, rebalances the game, and makes it a bit more challenging. The changes are most noticeable in the Hardcore mode, giving you an excellent reason to beat the game over again. 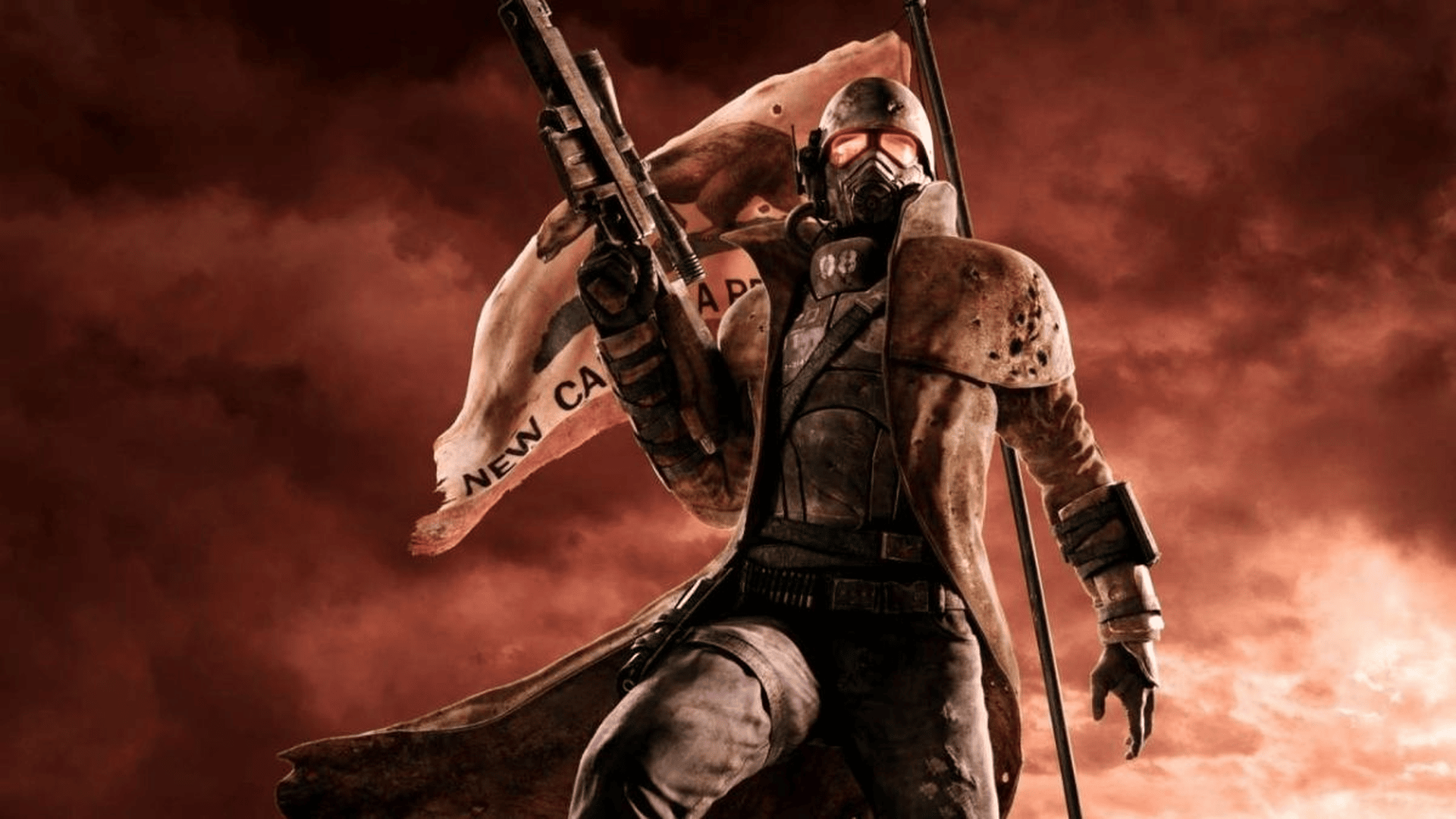 This is a fix that’ll let the game use more than 2GB of RAM. Simply put it into your New Vegas game folder and run it. It supports all known versions of Fallout: New Vegas (including both Steam and GOG). 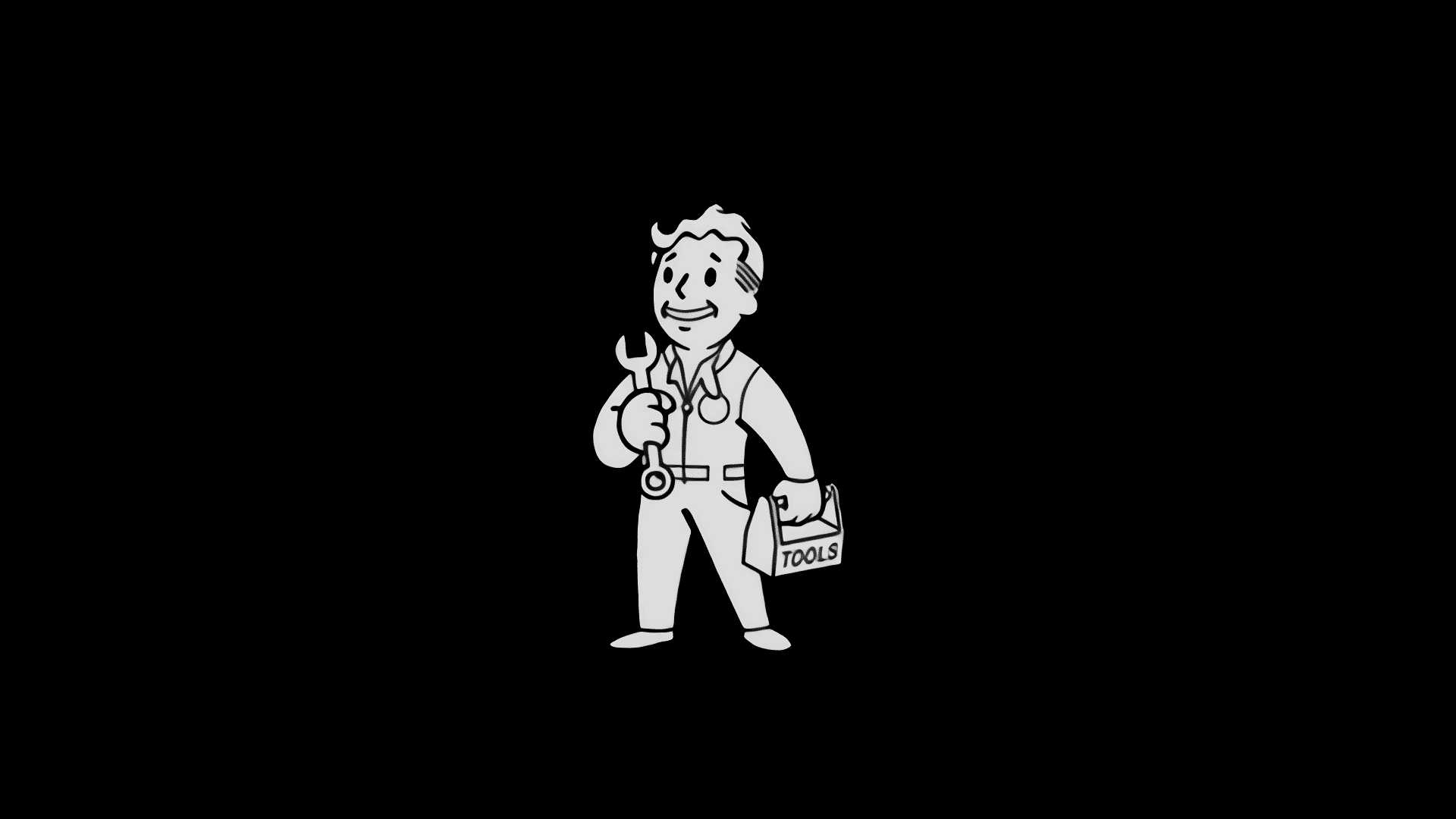 This patch is a collection of bug fixes that use updates and fixes from both Unofficial Patch NVSE and Unofficial Patch Plus and extends upon them. It is also regularly maintained.
If any mods suggest you should use any of the previously mentioned mods, you should just use this one instead. The bug fixes are too numerous to be listed here, but it fixes almost all of the bugs in the game and DLCs included. It can also be used with Yukichigai’s Unofficial Patch, which is a huge plus. A definite recommendation for anyone looking to have a smooth experience. 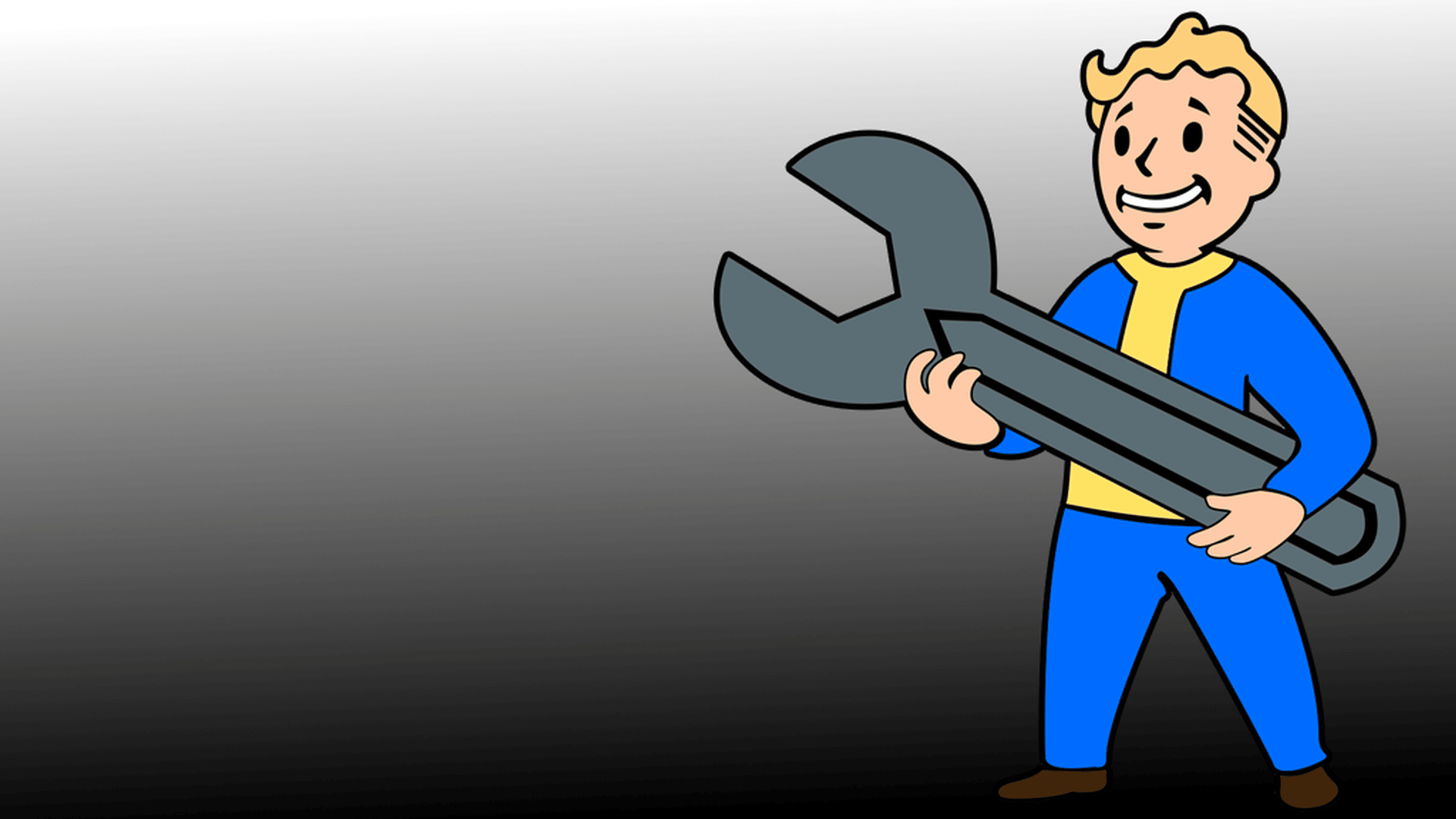 Or simply YUP is a patch that addresses almost all the bugs, exploits, and other glitches that were not fixed in the game’s final update. It fixes not just the main game, but the bugs and exploits in the DLCs as well. Since the list of bugs is too big to be listed here, all I can say is that this is one of the more essential patches that will greatly improve your game. Compatible with the patch mentioned above. 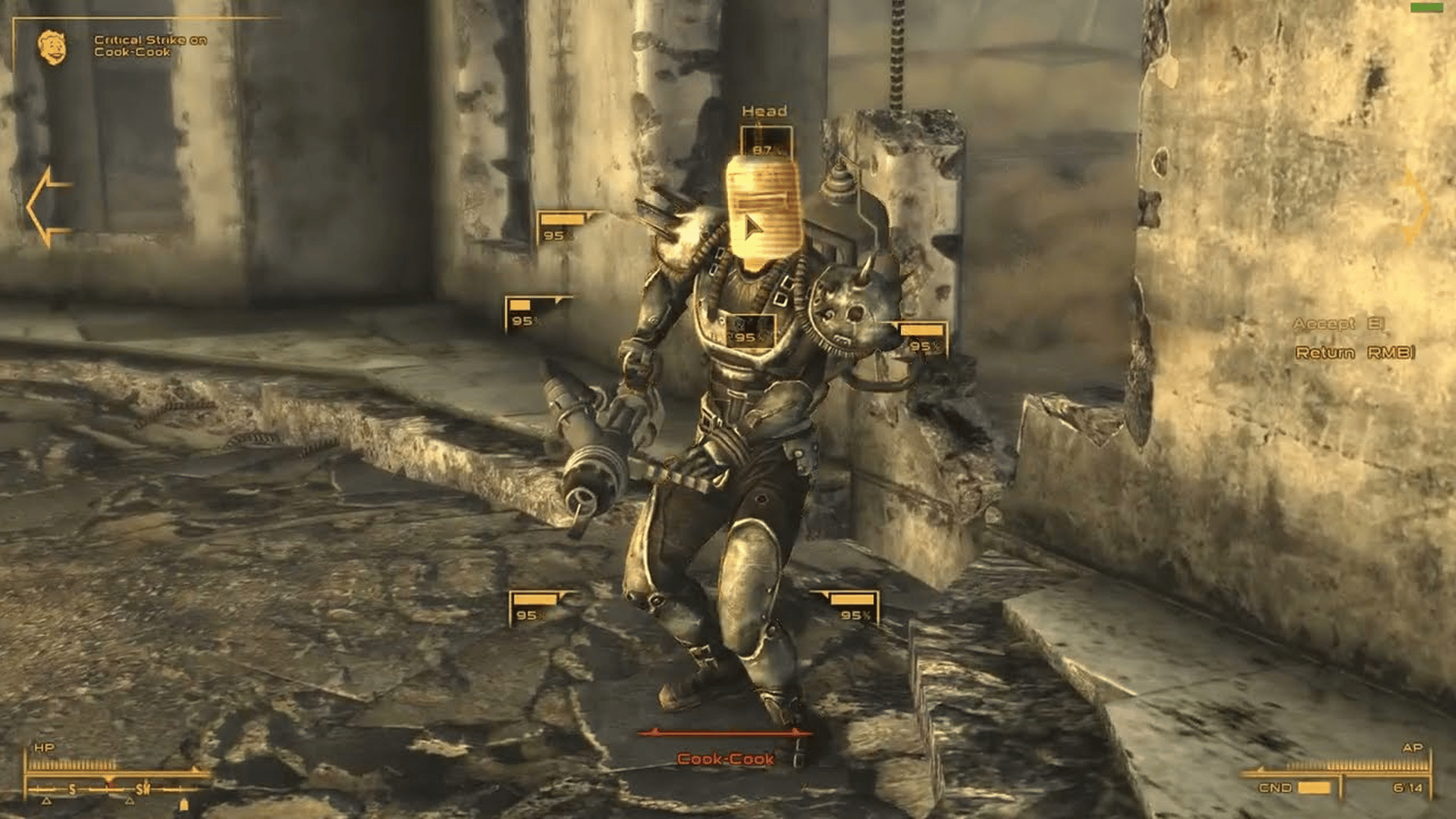 The combat in F: NW is practical, but not the best, and not to everyone’s liking. To make the combat more approachable, I would suggest FAST V.A.T.S. since it will greatly improve the combat experience. This mod allows for more fluid combat, and also faster kill cams, which may enhance your experience greatly. As far as gameplay mods go, this is one of the more useful ones. 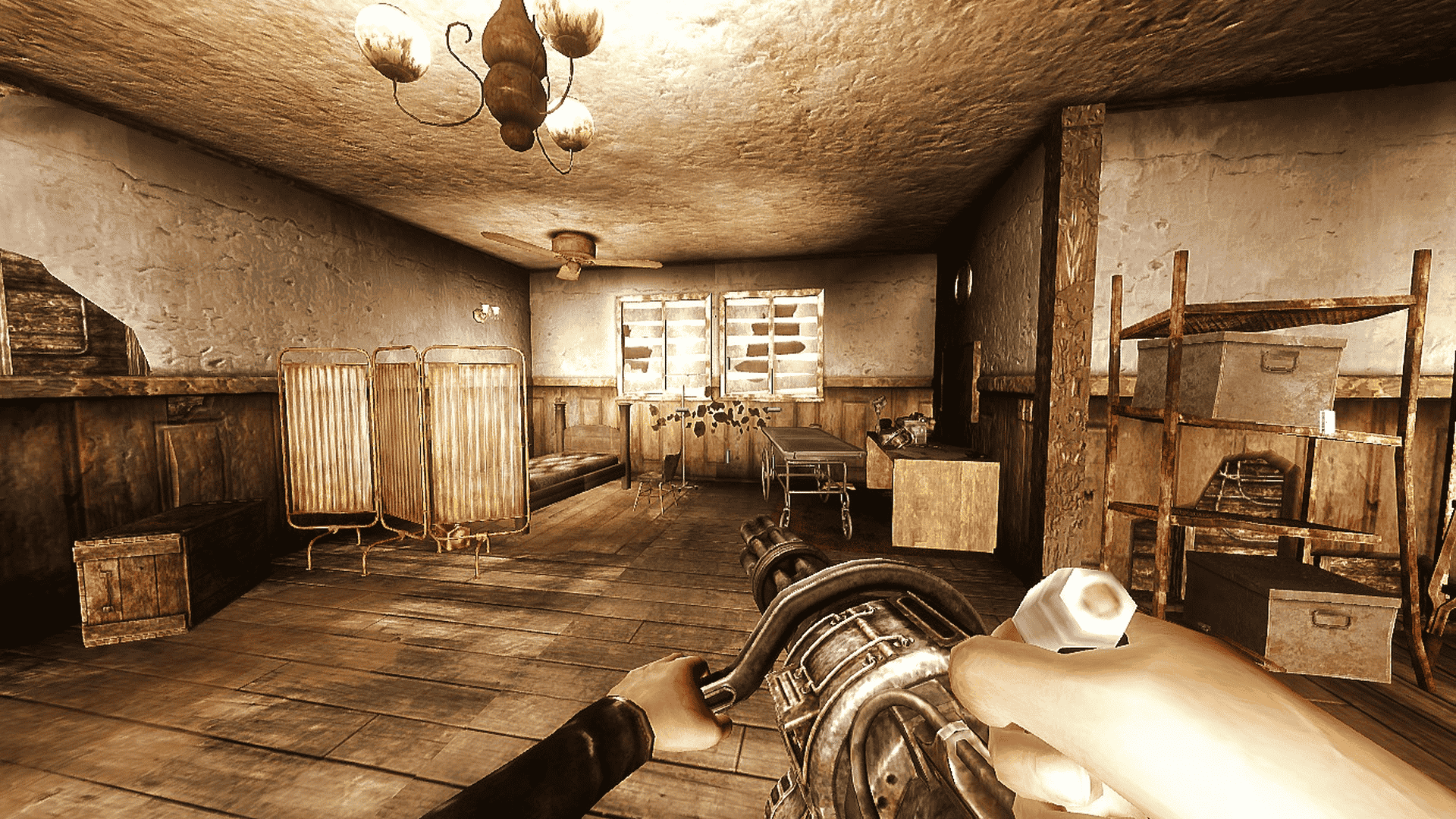 Since we’re on the topic of combat, here’s another mod that can be useful. Asurah Reanimation Pack is not an essential mod, but it gives a more fluid animation in everything from firing, aiming, and reloading. Not only does it overhaul every weapon in the game, but it’s also compatible with several other weapon mods. 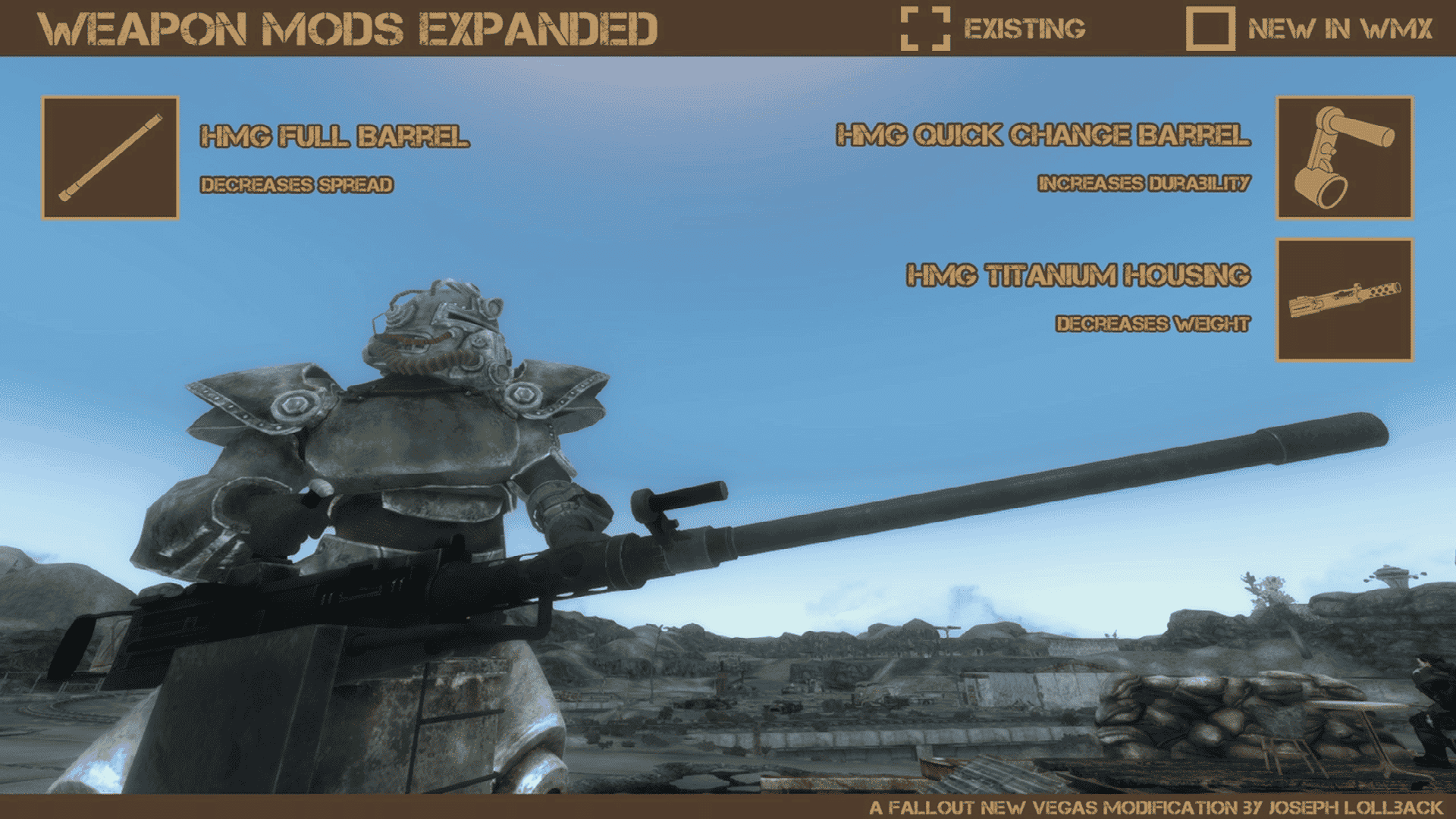 Fallout 3 had a mod Weapon Mods Kit, which was highly popular and also served as an inspiration for the implementation of weapon modding in New Vegas. The creator was so proud, that naturally he “expanded” the Obsidian’s weapon modding systems.
The mod greatly expands the base game modding systems and also adds several unique weapons.
Nearly all of the weapons are moddable, and it gives the game and combats even more depth. Definitely, something that you shouldn’t miss out on.

Weapons of the New Millenia 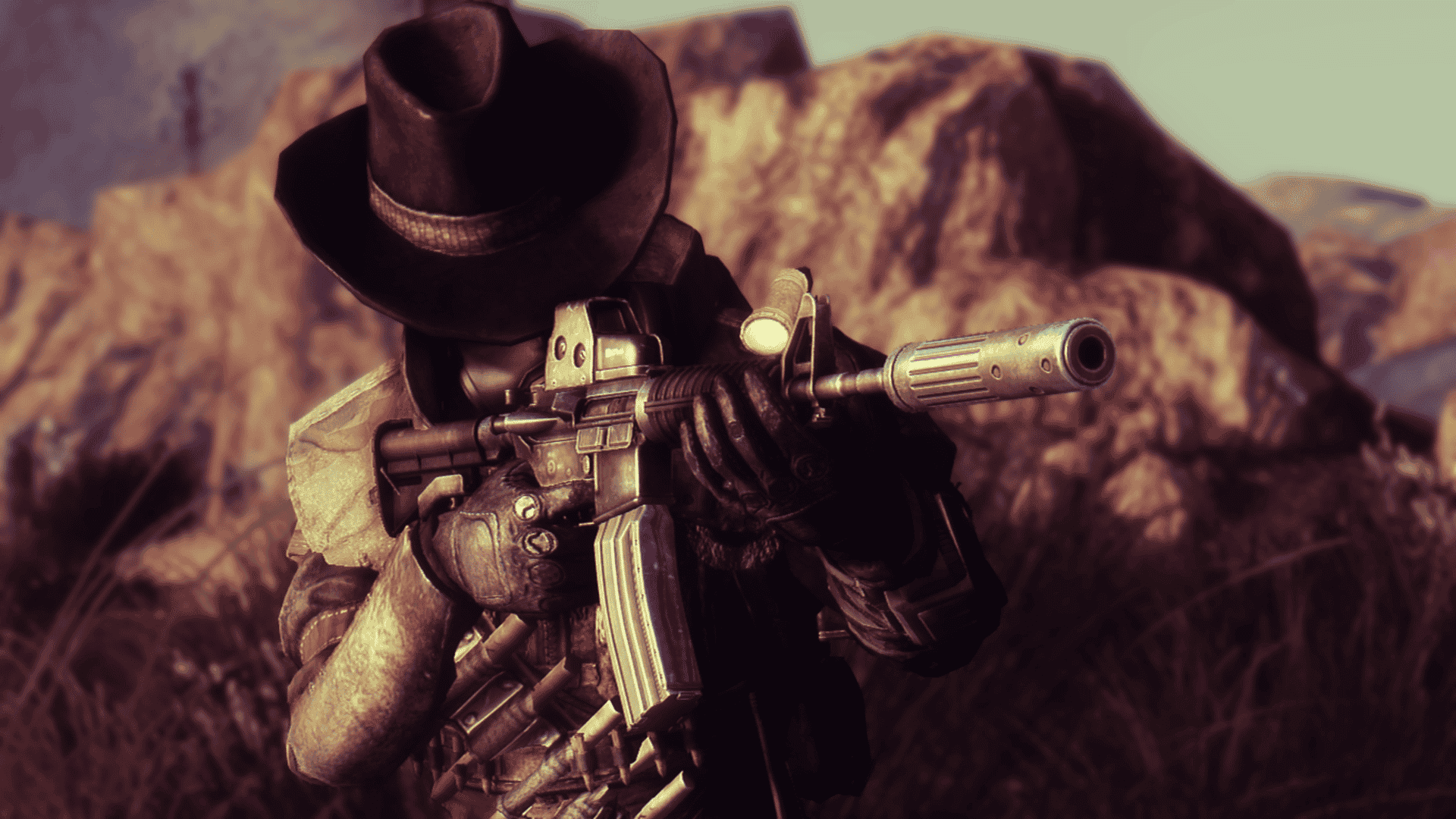 If you’re looking to expand the weapon collection on your next playthrough, this mod has you covered. With over 45 new weapons and a bunch of weapon mods, complete with sounds and level integration. In addition to all of this, there is also a new exciting quest, plus a fully voiced weapon vendor. 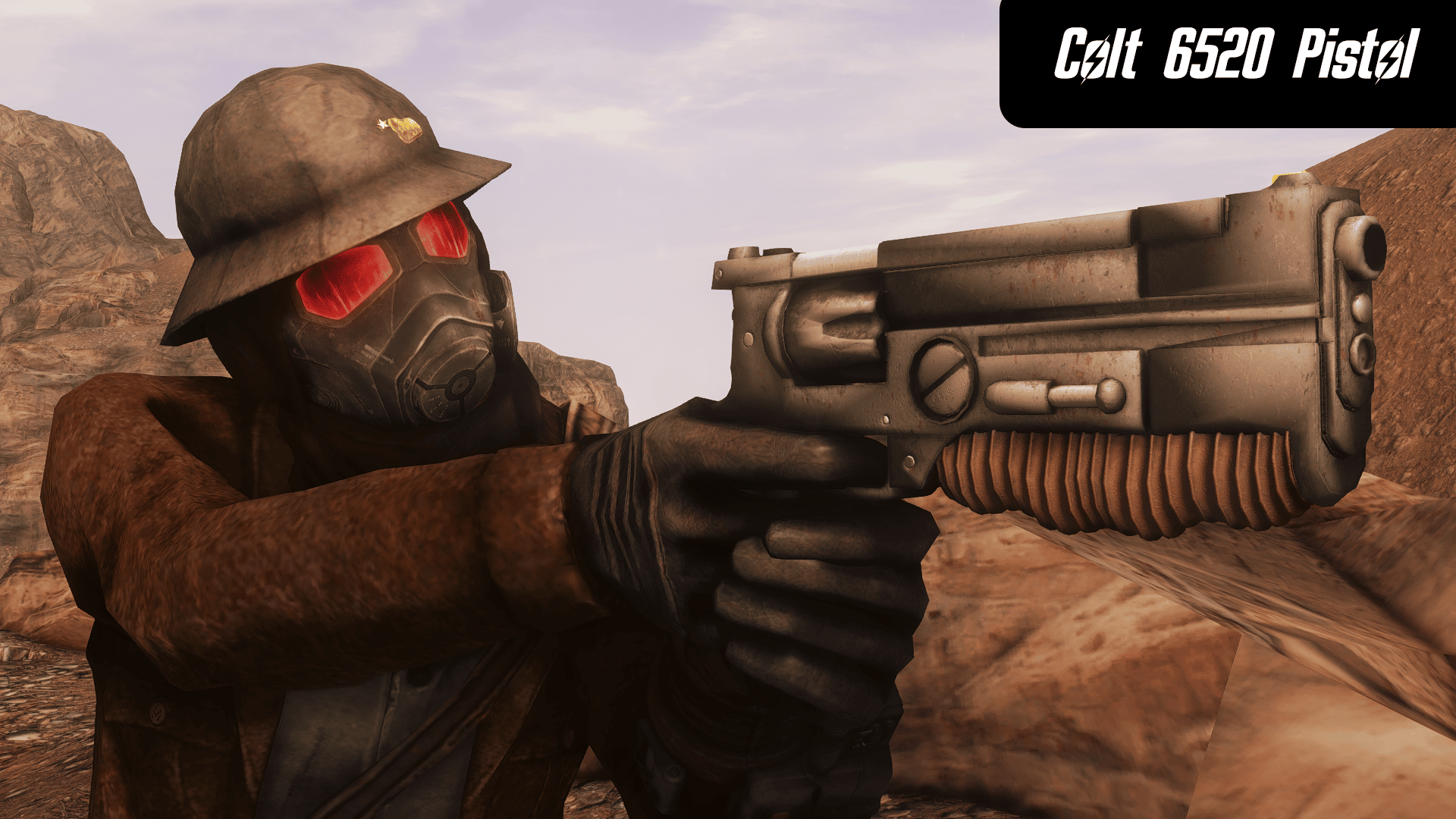 In case you don’t want modern weapons in your game, you can always try the classics. Classic Fallout Weapons, will bring the weapons from the original first two games, complete with sounds and ammo types. Crafting is also available, so with this mod, you can also craft new ammo as well as the old ones. This mod is also compatible with all DLCs. 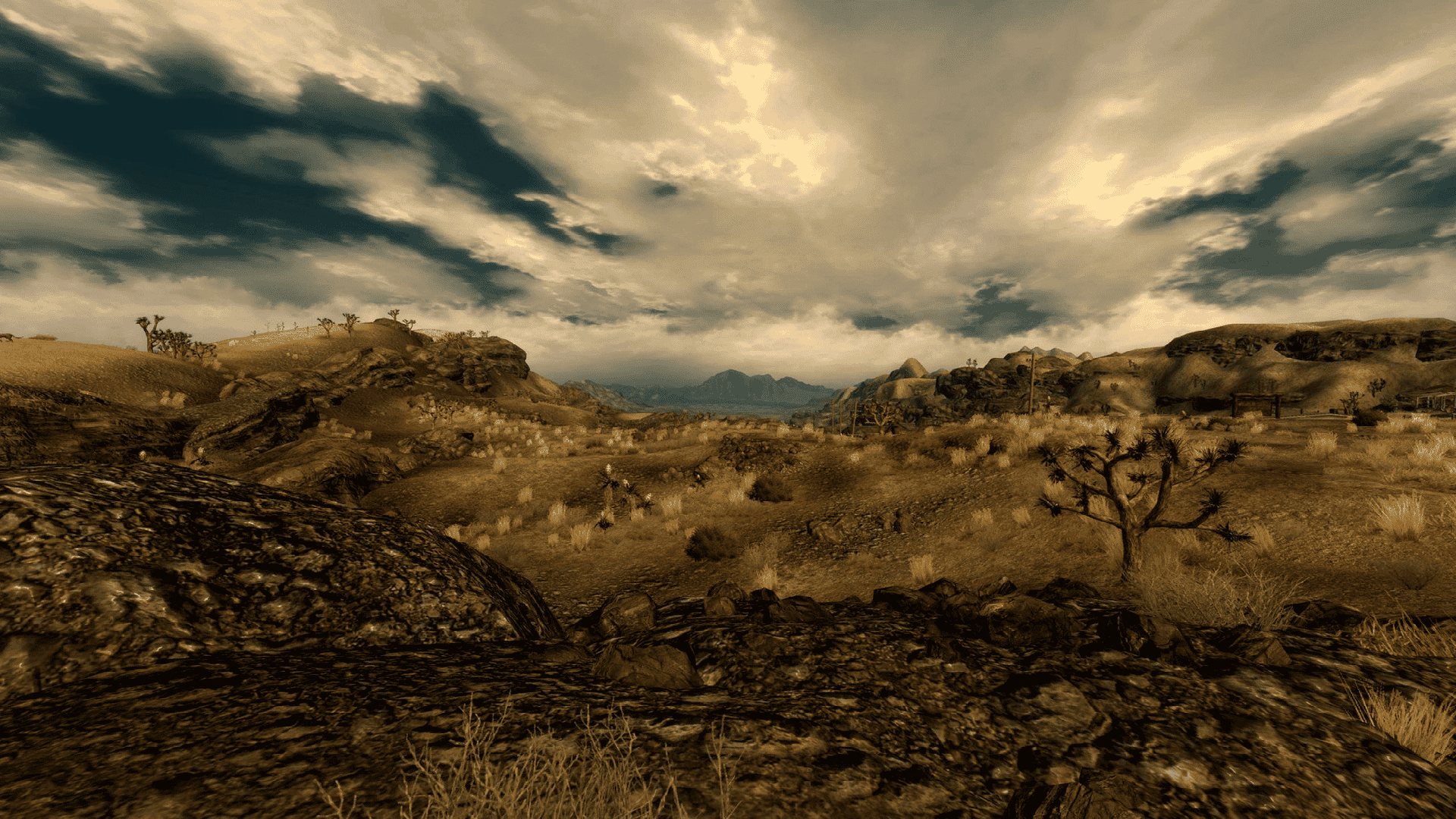 A simple mod, that enhances the game greatly. Nevada Skies gives a whole new look and in turn experience to your playthroughs. It also comes with a very wide range of customization options, for the best possible gameplay experience. 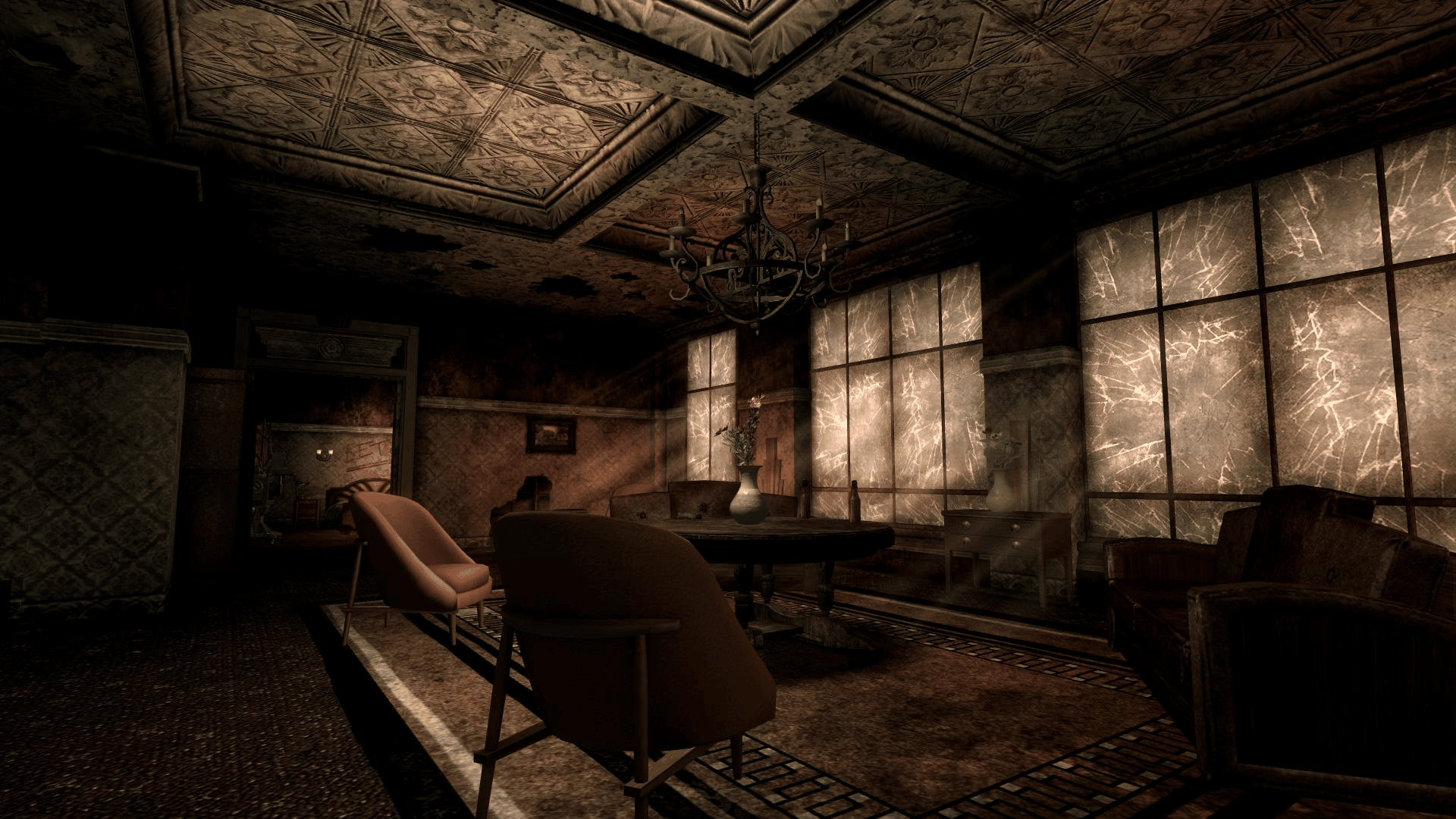 One of the more essential graphic mods for New Vegas, Interior Lighting Overhaul may at first glance not seem like much. However, good lighting is essential for creating a great atmosphere, and the mod manages to greatly improve the looks of the game and gives the game a new eerie look. Lighting was also improved and adjusted by adding lighting fixtures in places that were needed.
In short, you should definitely get this one. 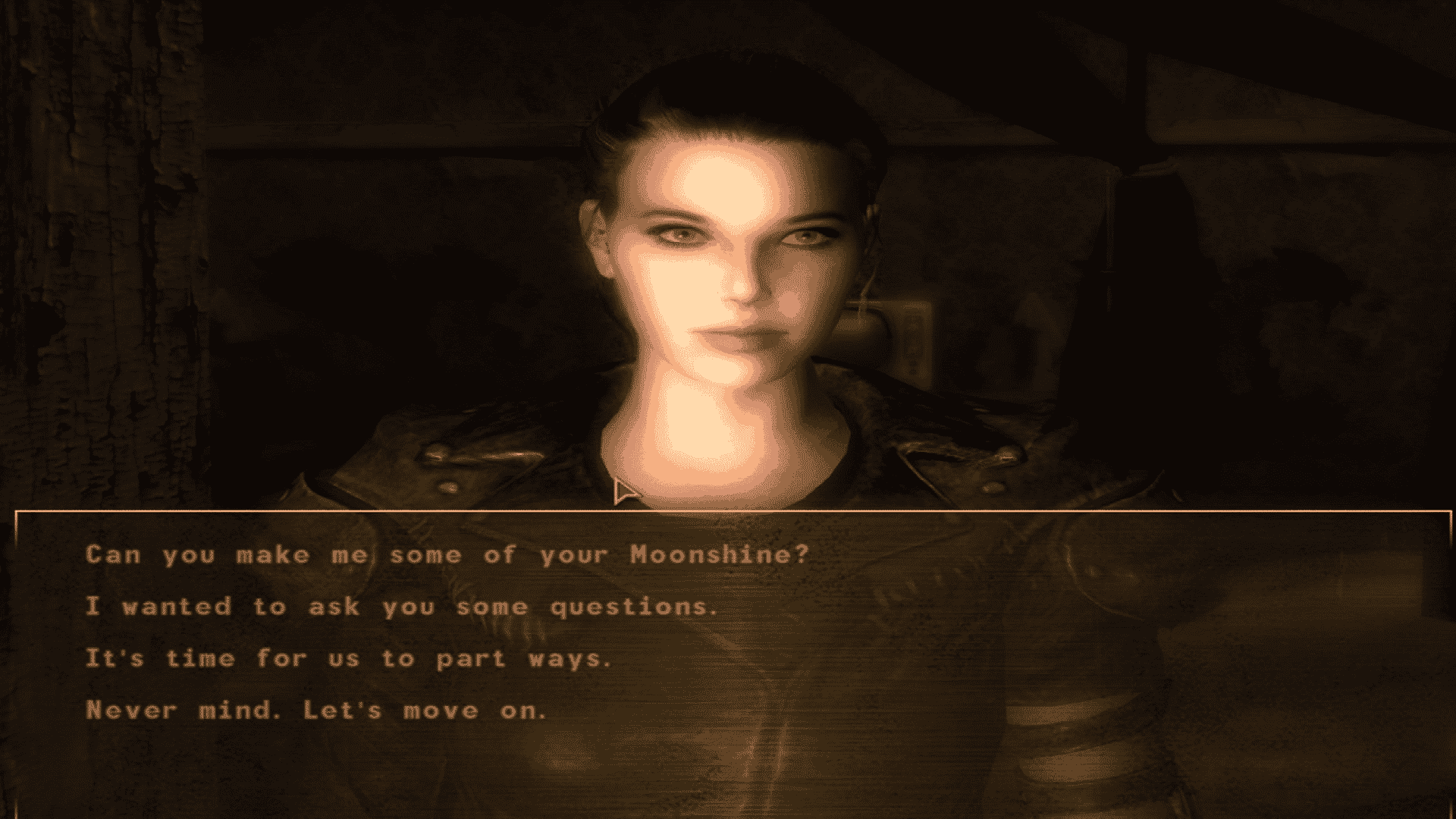 Made by the same person behind, other game mods such as Fallout 3 Project Beauty HD, this mod seeks to improve graphics (in both looks and design), as well as make it more lore friendly and add a healthy dose of realism.
The mod fixes graphical glitches (such as skin issues, hair, and face proportions), and adds a bit more lore, whose end goal is to make a more enjoyable and realistic experience. 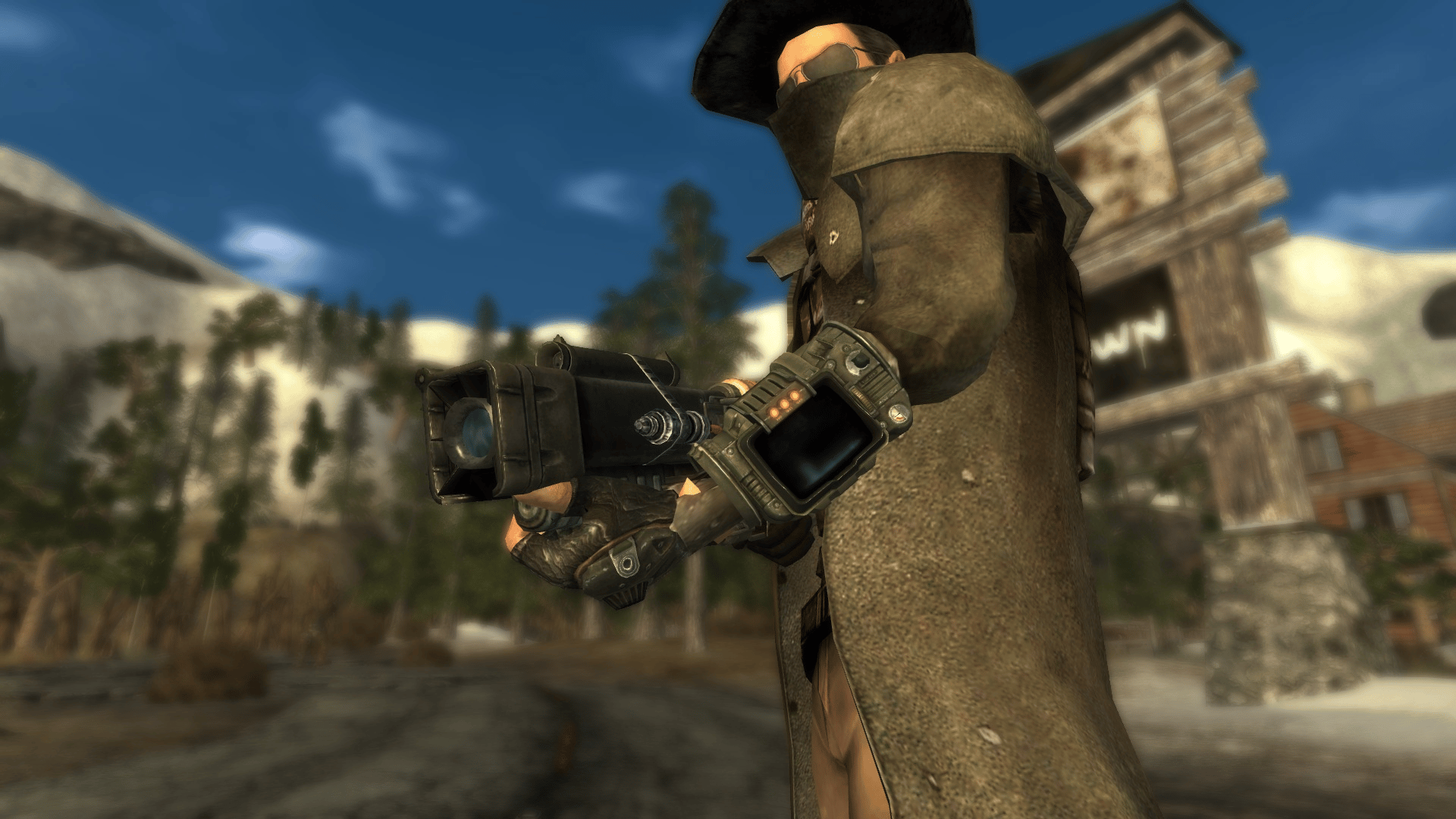 This mod is a result of a collaboration between several modders, that aims to make Fallout: New Vegas even more engaging, more challenging, and interesting.
What’s interesting is that it isn’t a total conversion, but more like a package of mods. In addition to this, you can also pick and choose which mod you want, as it’s not forcing you to go all in.
Some of the things that are present are the grenade hotkey, bullet time, more detailed health visuals, and so on.
A definite recommendation for a second playthrough. 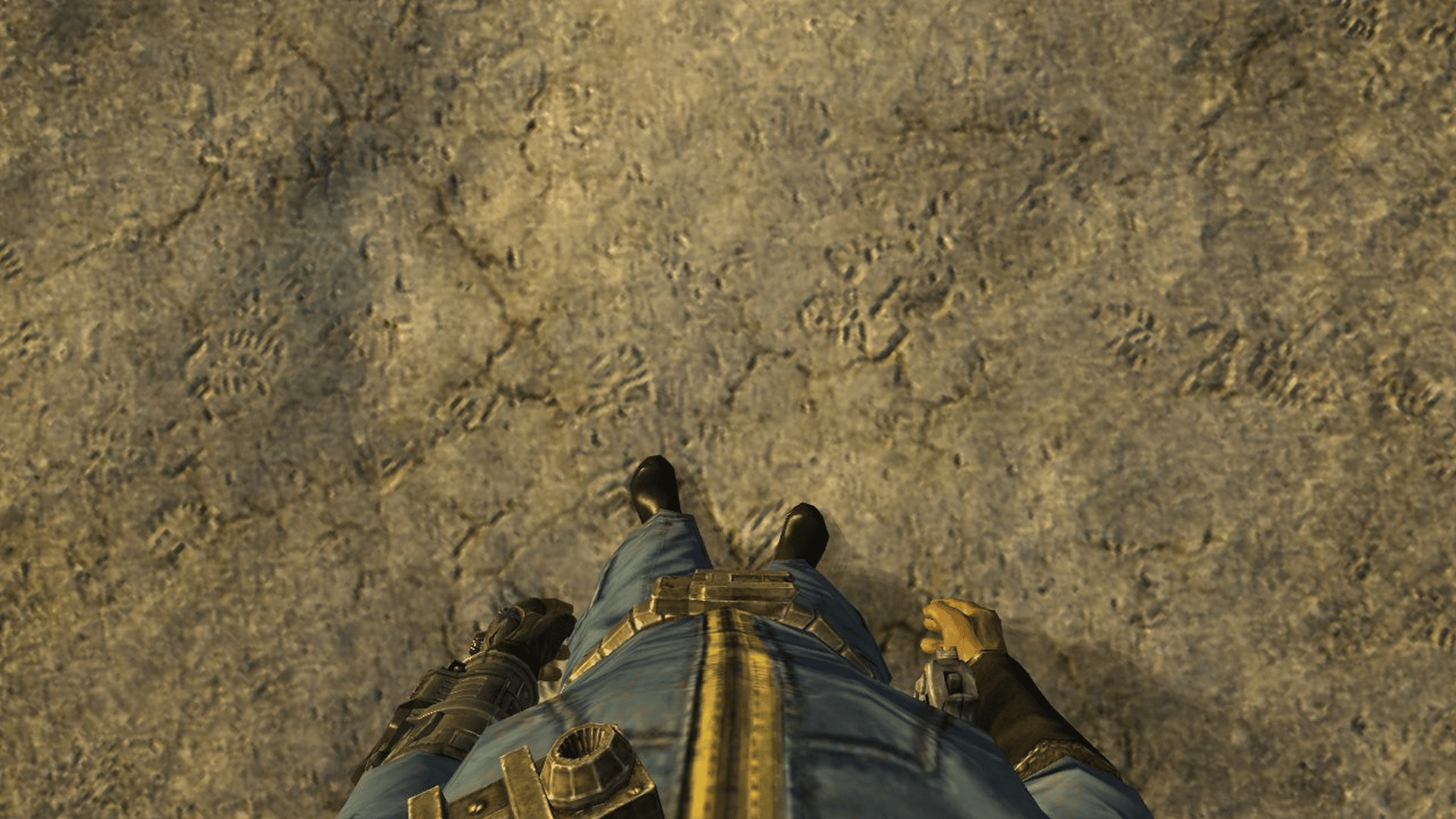 This is a simple NVSE addition, but it adds so much depth to the gameplay. It gives you a full-body first-person camera (you can view your entire body), and different player shadows.
If at any time you find yourself in situations where you’re knocked down, sitting, and so on, the camera will remain in first person view. It’s a small addition, but it gives more realism. 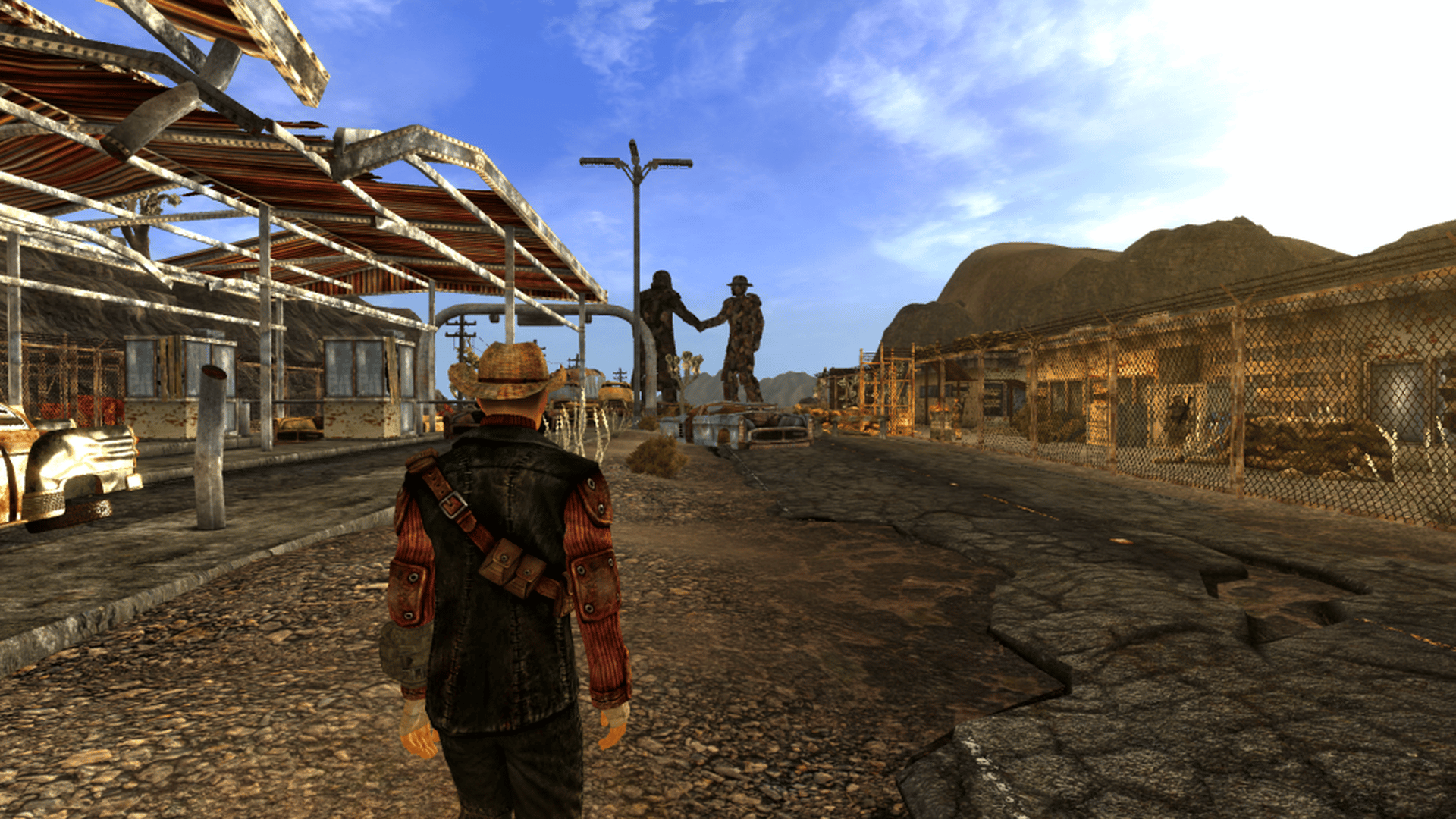 If you ever got tired of the same old beginning of the game, this mod gives you the option that besides creating your character, you can also choose a different backstory and starting location
With this mod, you can start at over 95 different places in the Wasteland. You can also have fully randomized and faction-specific starting points. It’s a great way to spice up your next playthrough. 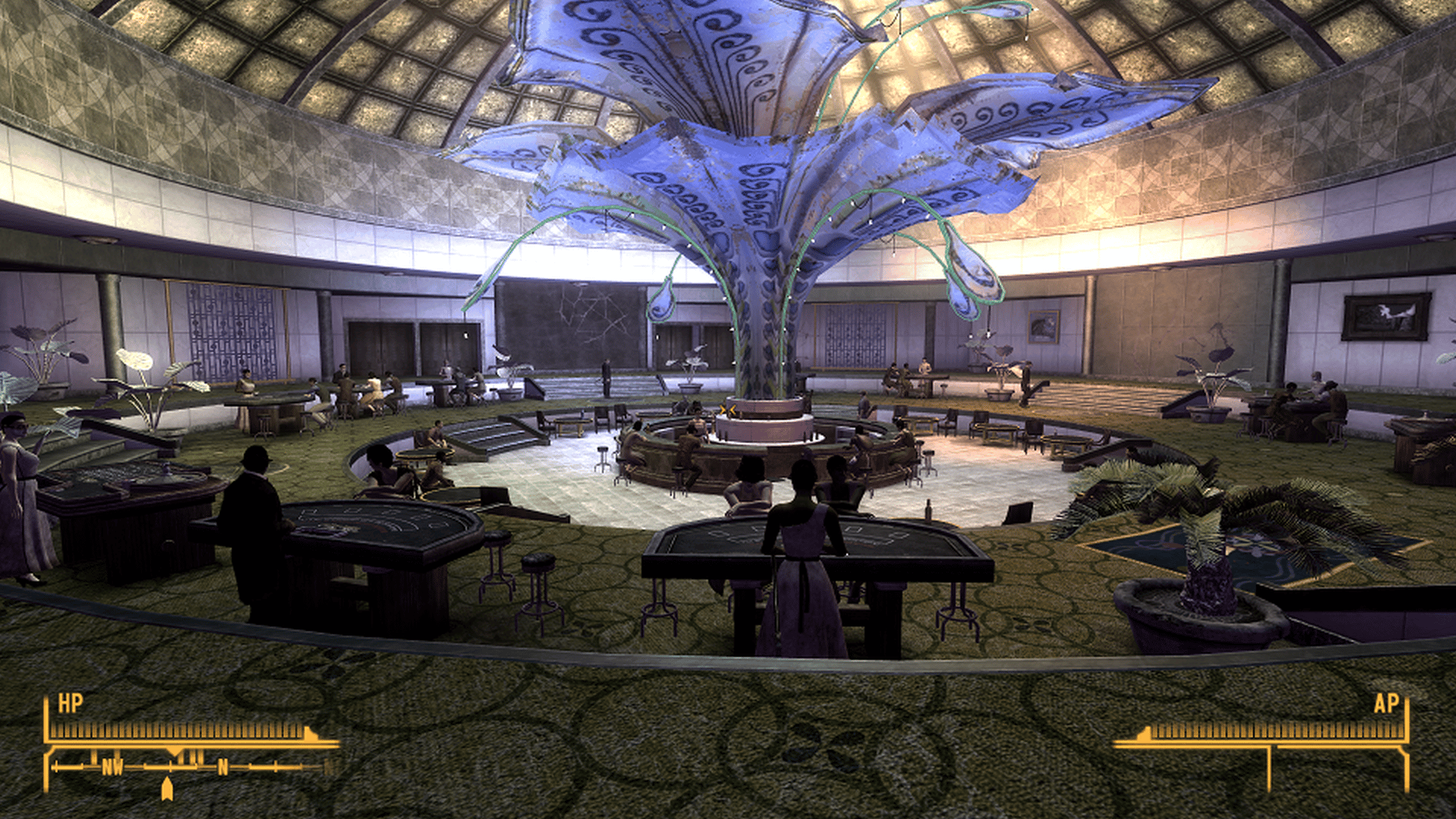 The name says it all. If you found the casinos on the strip too empty, this mod will add a bunch of generic NPCs, to make it more lively. It is however lore friendly, meaning you won’t find that many people in the Ultra Luxe restaurant, as Mr. New Vegas keeps pointing out that people find it strange. It’s a nice detail, but it shows the dedication of the author, even if it’s a small mod. 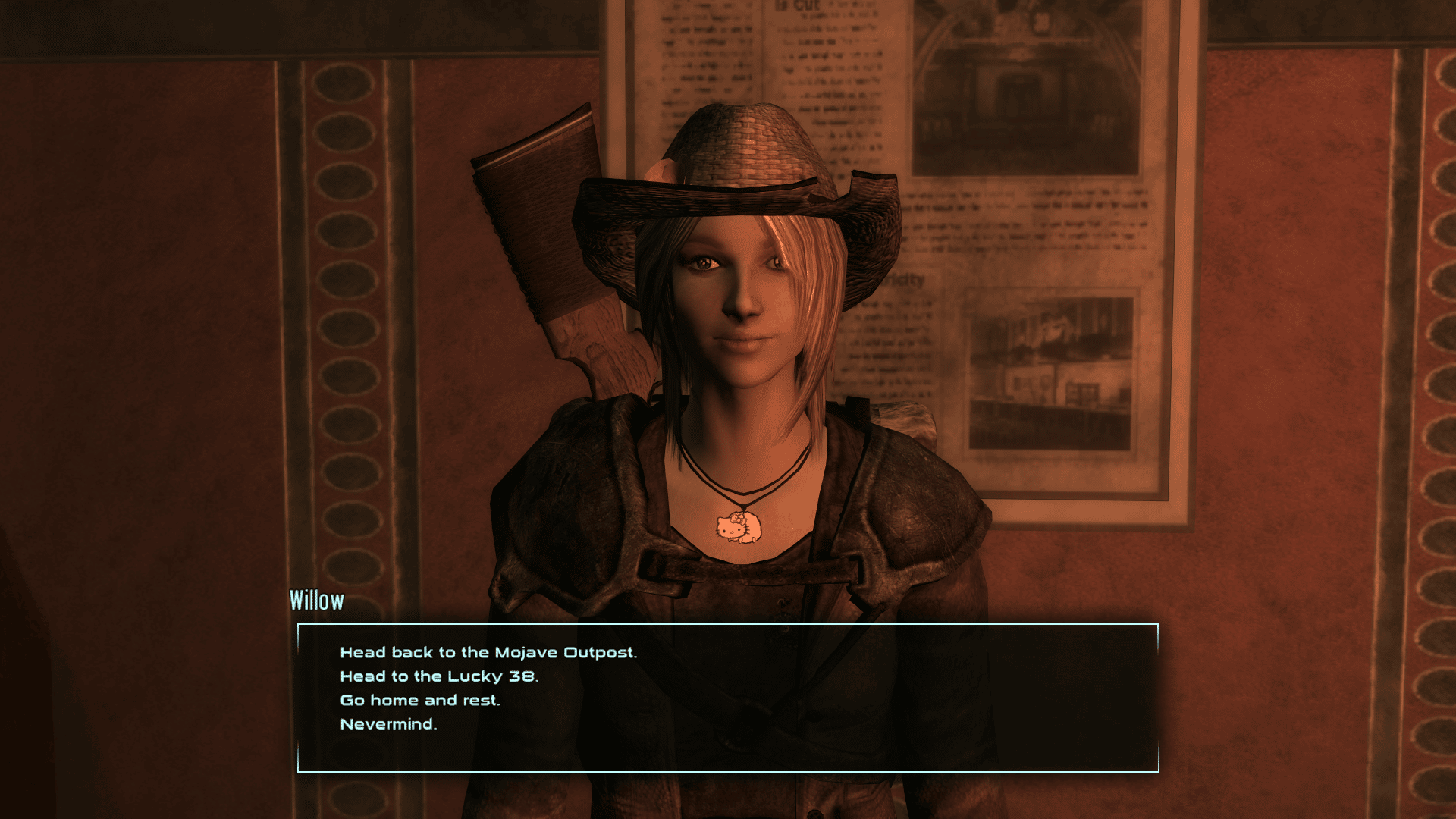 Willow is one of the more unique companions NPC mods. A story-driven character with over 1200 lines of voiced dialogue, Willow gives you a new gameplay experience. A quirky companion, with her own quest, the best thing about her is the comments she makes about the people and the environments that you visit. Willow feels like a natural companion to the game and is a good start if you want to try companion mods. Also, she’s fully voiced by none other than the mod author herself. 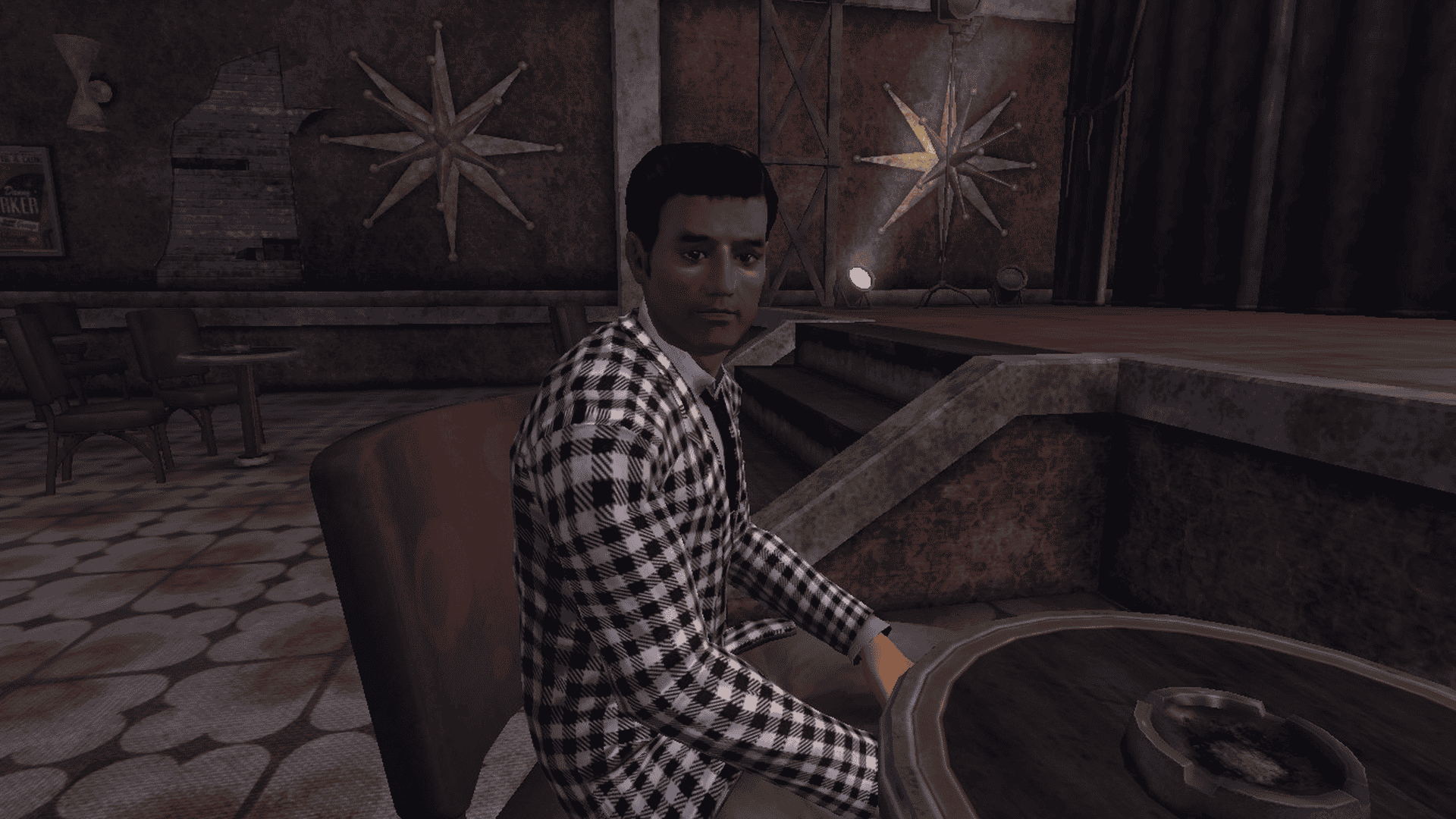 Somewhat minor spoilers for the game, but after you meet Benny at the Fort releasing him, Benny will become the companion. This mod gives you the option of teaming up with him, and deciding the fate of the Mojave. It gives you a new perspective on the game, and it feels the void of what could’ve been. 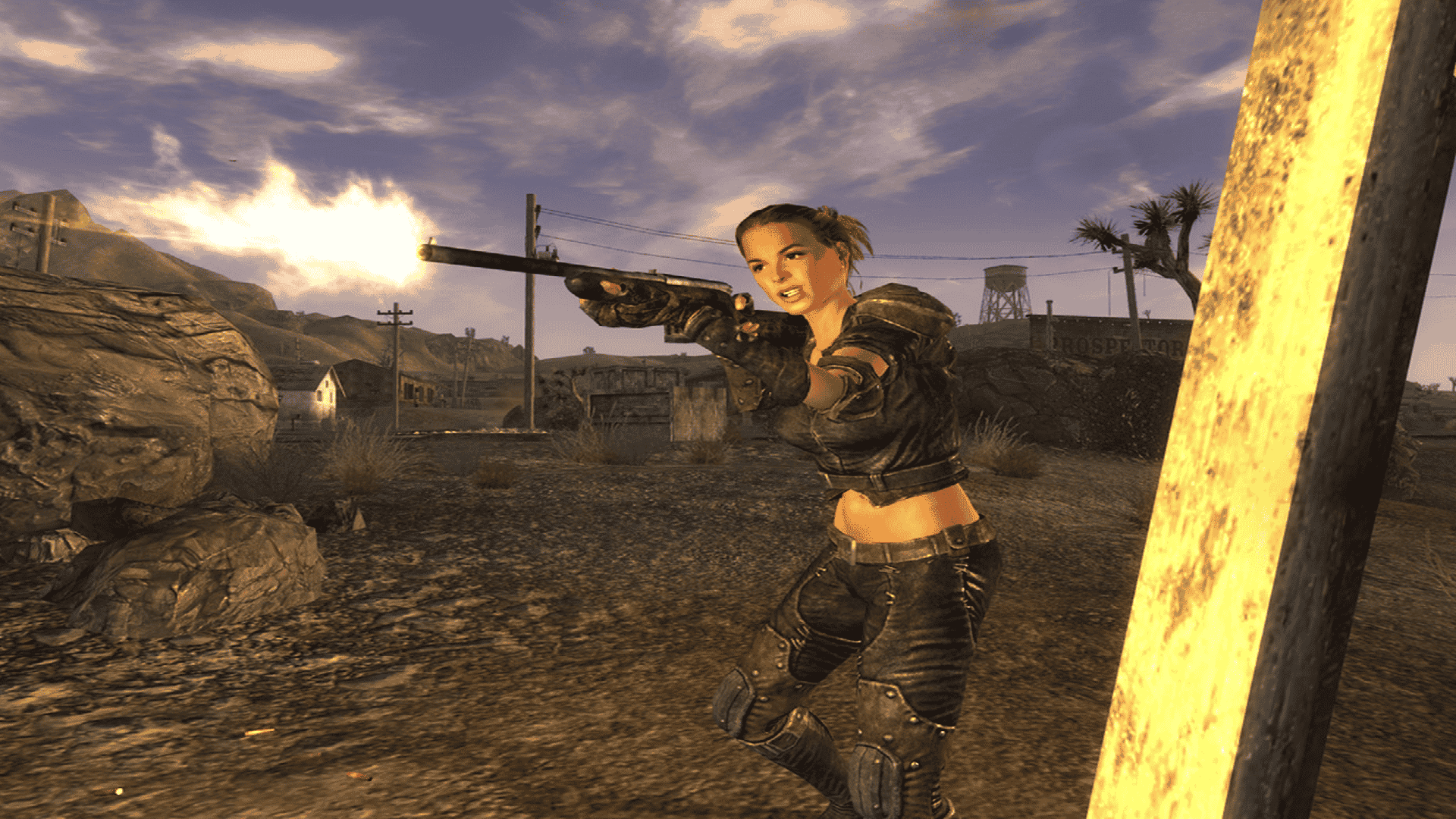 Exactly what it says in the title. Getting this mod, will allow Sunny Smiles a guard from Goodsprings to join in on your adventures. In addition to this her dog, Cheyenne also joins the party. Fully voice and lip-synced, this mod will give you one extra companion, although some tweaking may be required for the most optimal experience. 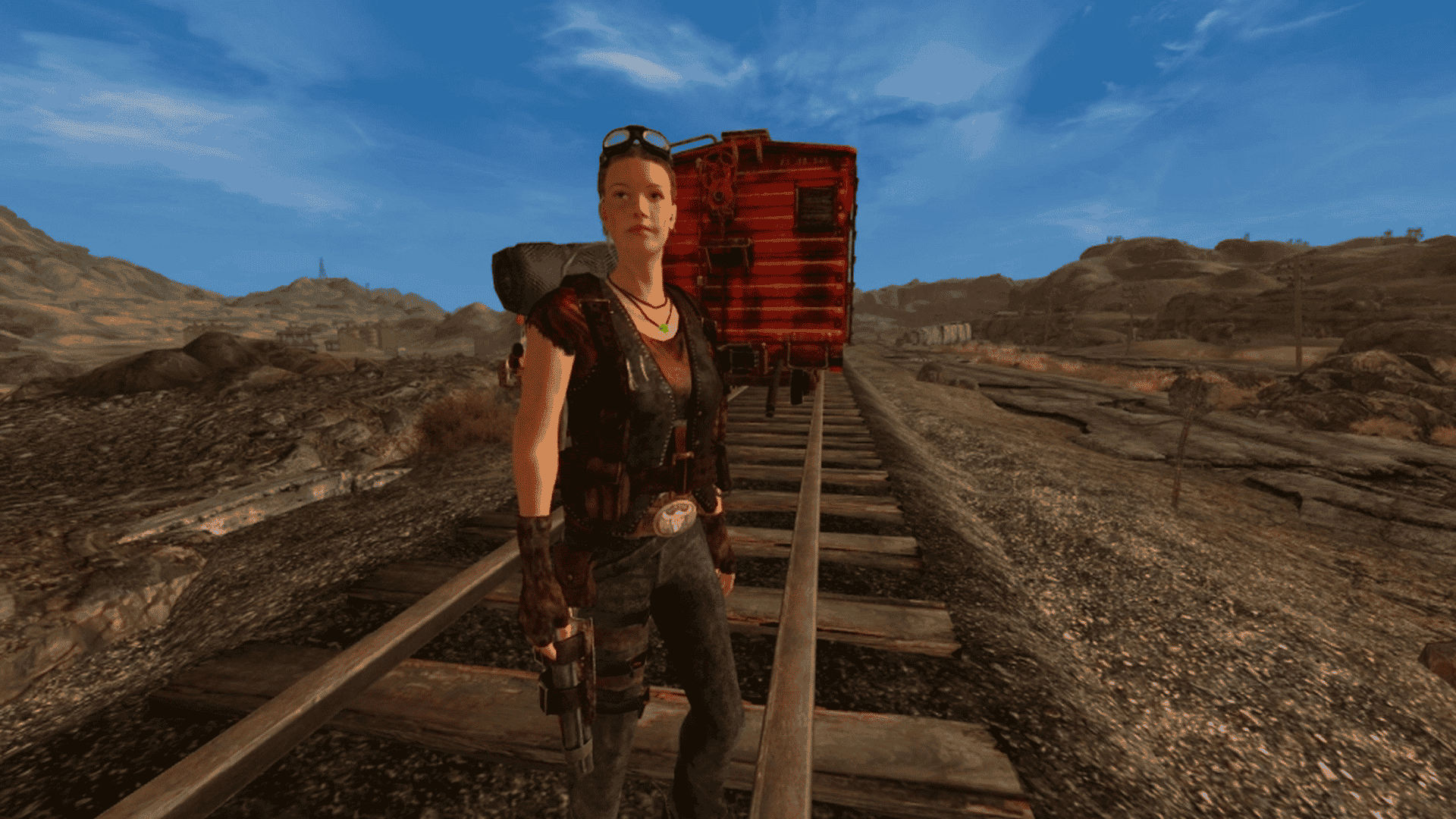 Another good companion mod, Hope Lies is also a fully voiced NPC companion. Found at the begging of the game at Goodsprings, she’s a fairly good companion, that also comes with her own small quest line. As with other companion mods, she too can be customized to your liking. 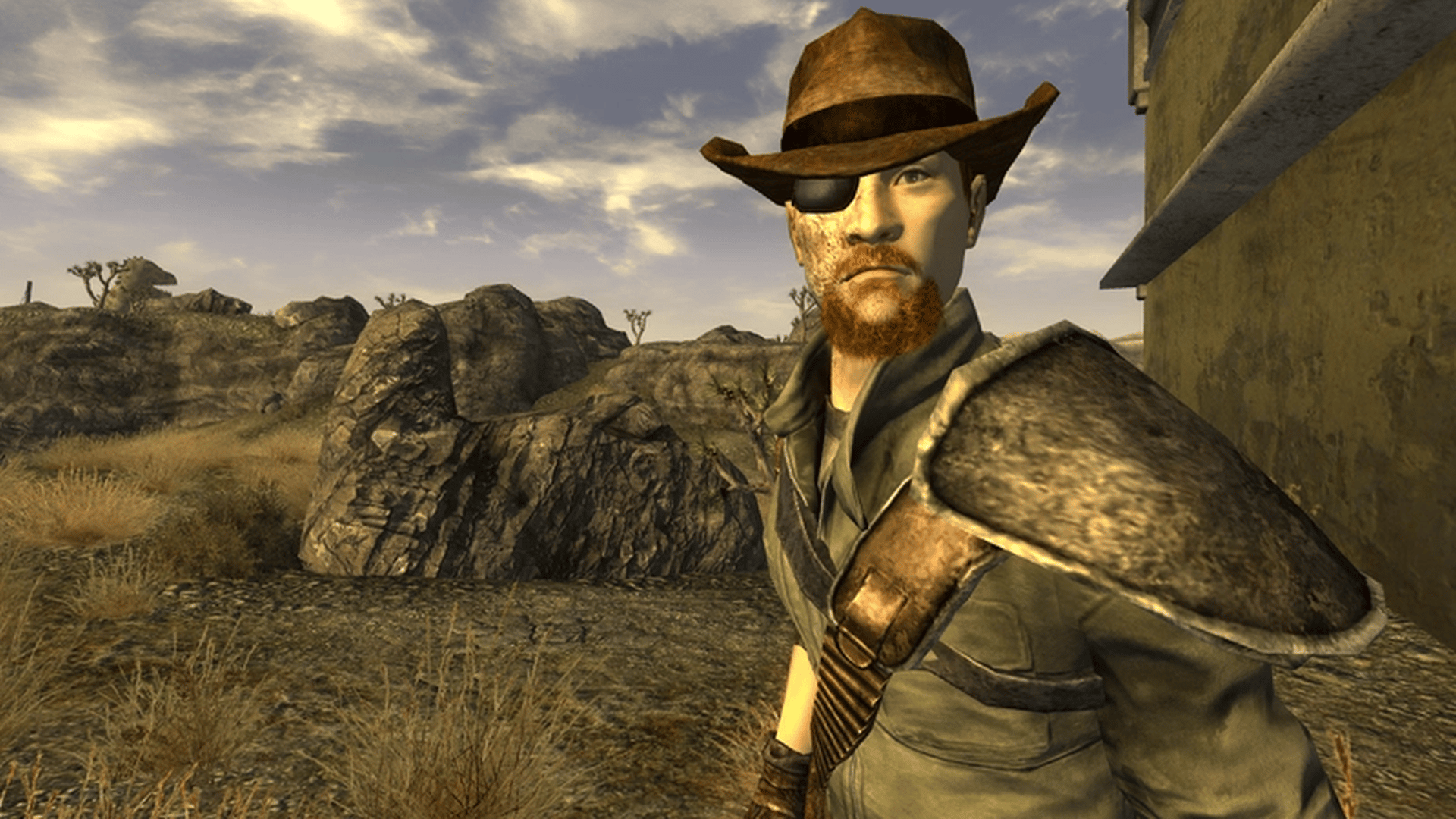 Here we have a male companion mod from the creator of the New Vegas bounties mod. Russel is one of the phenomenally written companions. He comes with his own backstory and quest line, which is rather engaging. Good character, and good writing, although some minor tweaking may be required, based on your game preferences. 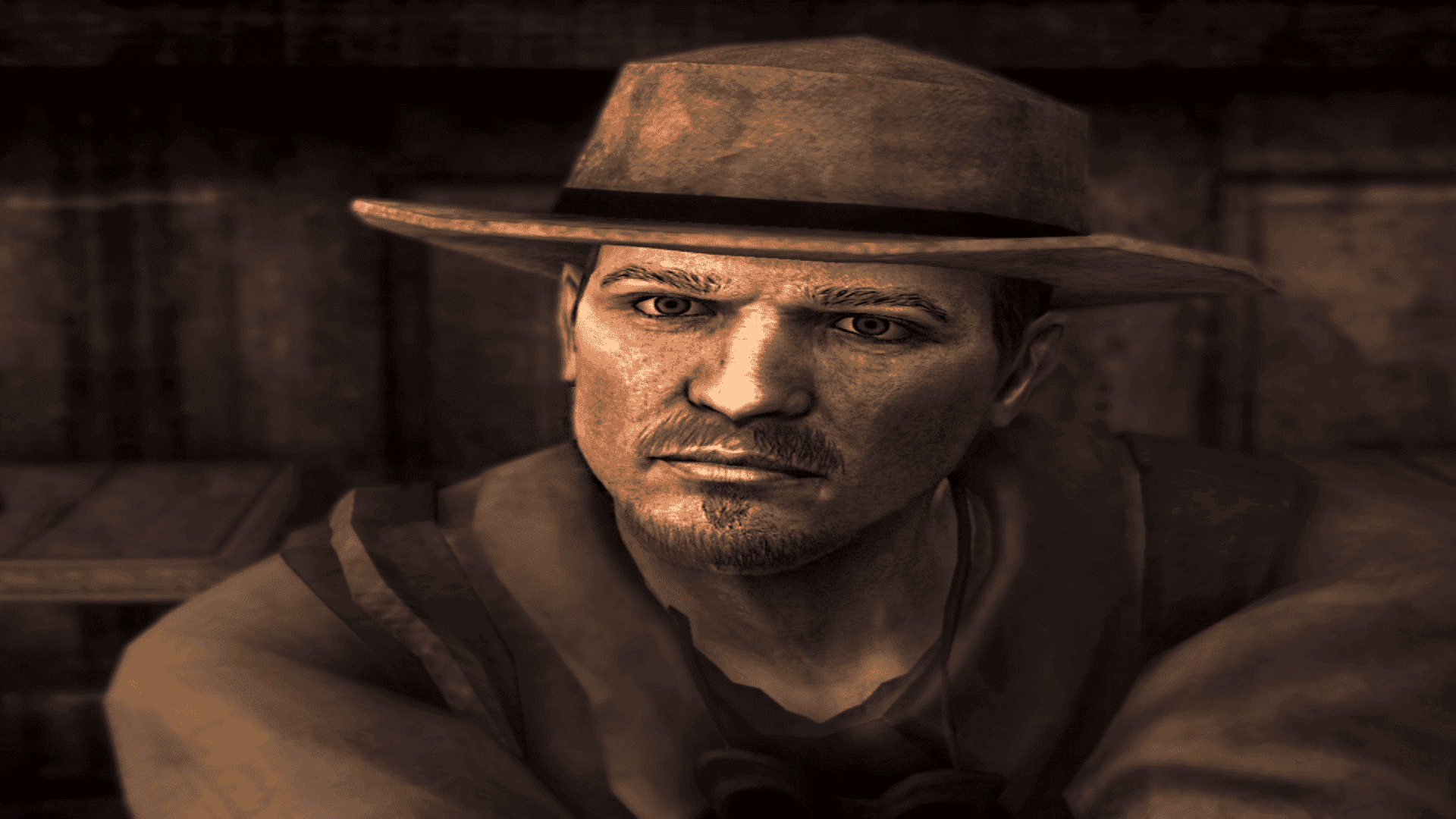 As the name suggests this mod is a character overhaul mod, but it also brings a bit of style. Essentially, this mod is a giant overhaul, and it gives all the characters new head meshes, and high-quality textures. Despite being a graphics mod, it does greatly enhance the game, and there are high chances that you will keep this mod for your next playthroughs.

Menace of the West 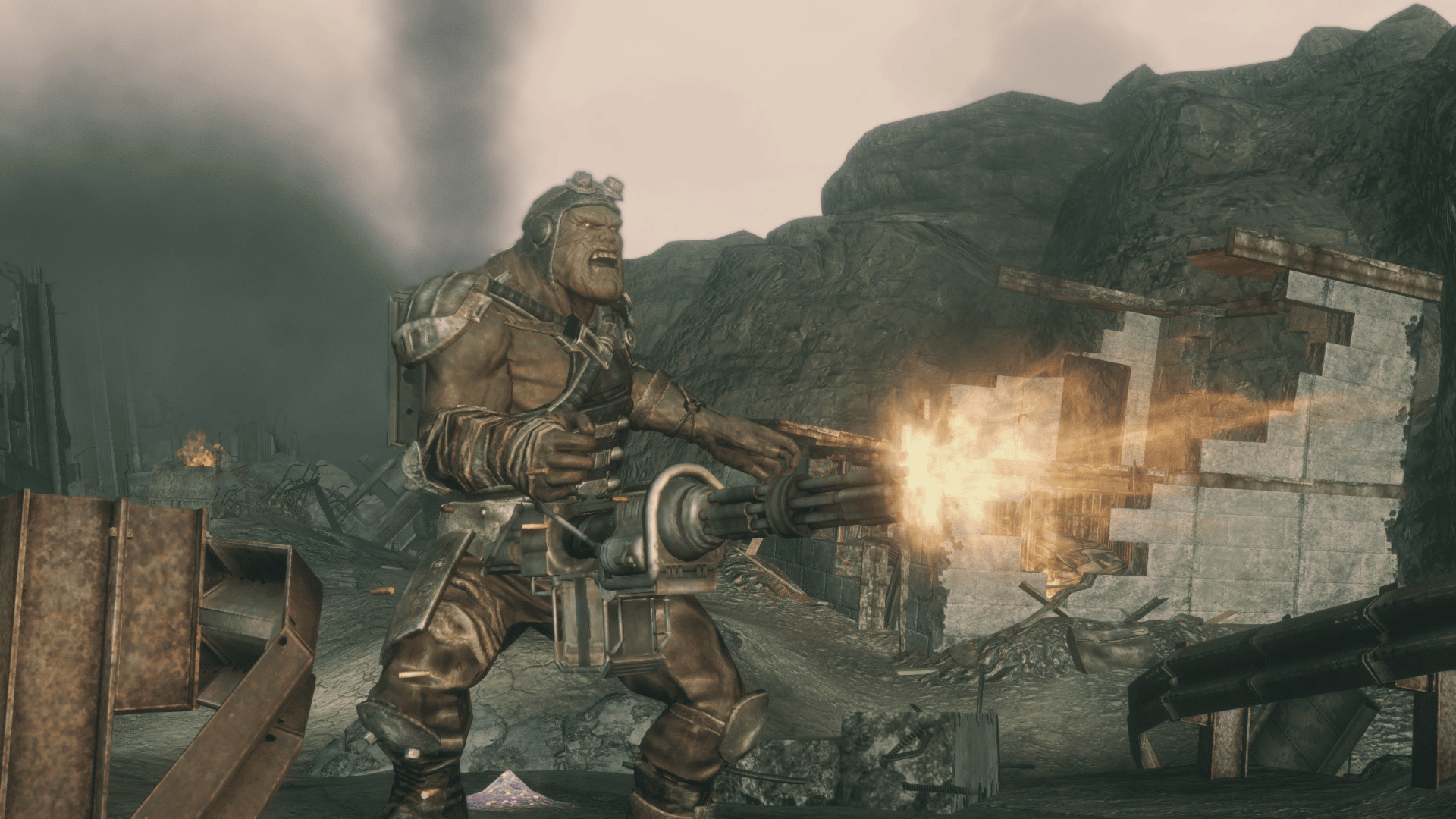 This small mod completely overhauls the look of the super mutants and gives them that classic Fallout look.
It includes classic faces, nightkin variations, and new animations. The animations are great and they include several idle animations which are significantly less excessive, and give it a more natural look. 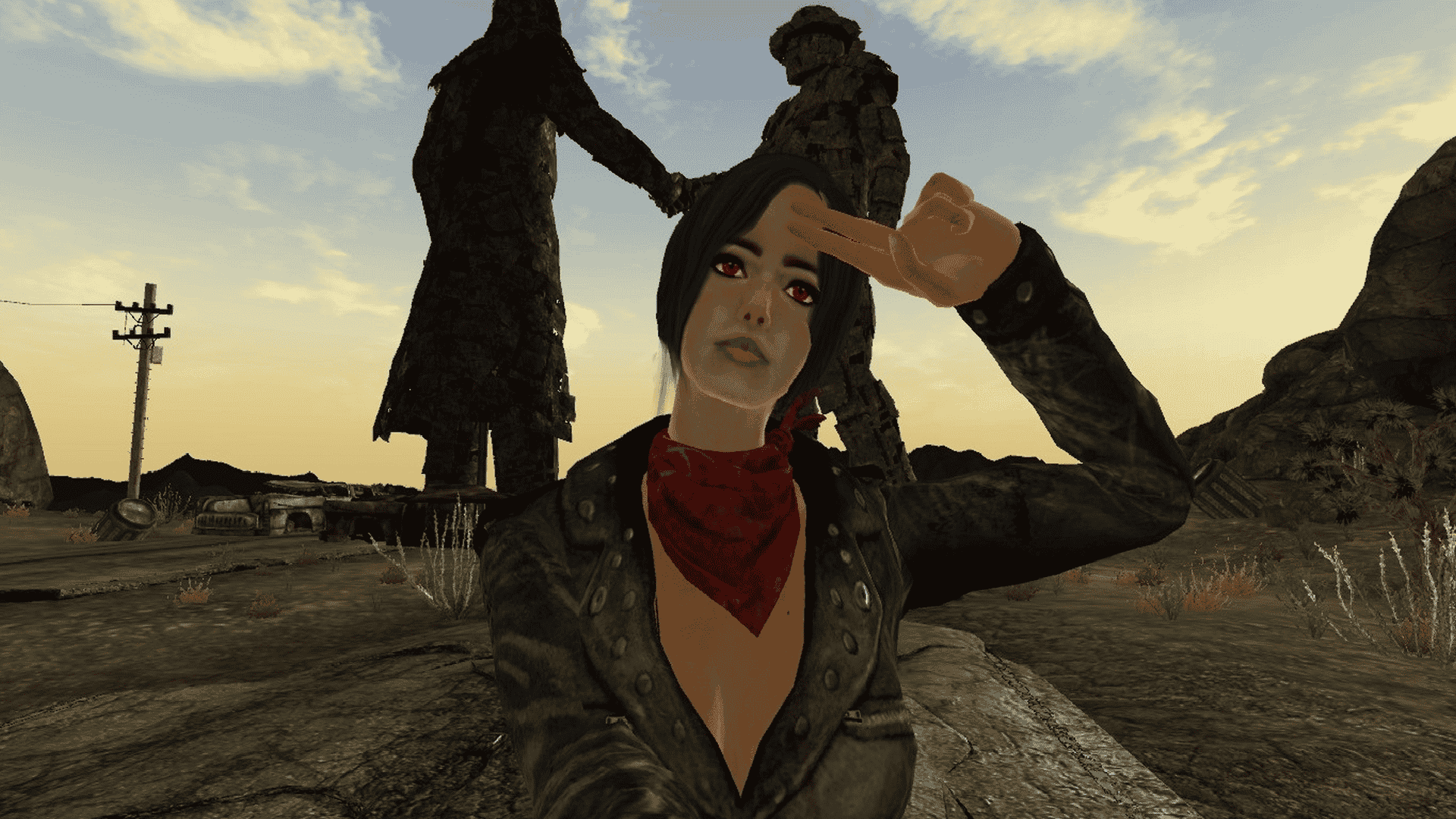 A mod that gives you much more customization options for your character. It features 151 female haircuts, 70 male haircuts, and 131 eye variations in addition you can also have glowing eyes.
You can create some unique characters, as it works well with other similar mods and add-ons. 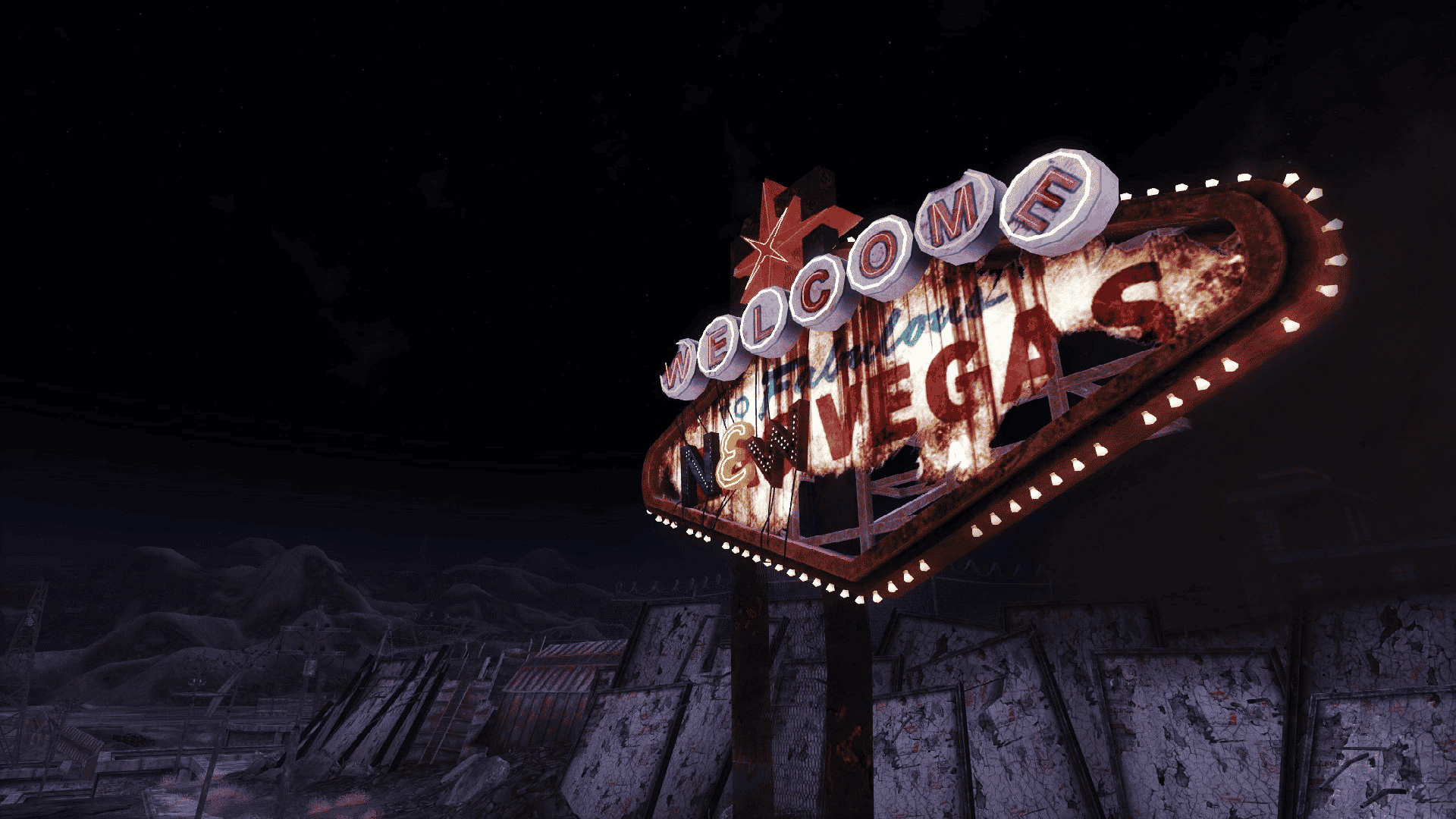 If you find all of this too tiresome, or simply don’t have time to mod everything, you can give Viva New Vegas a try.
It’s a fully modular modding guide for New Vegas, that has everything that you need to make your second playthrough more intriguing. Since it’s fully modular it means, that you can pick and choose what goes into your game. It offers more stable performance, stability, and tons of customization of everything from weapons to UI. 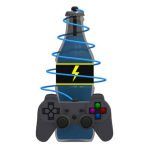