The anime industry has always been a formidable niche that enjoyed oodles of great shows. From universally acclaimed anime like Dragon Ball Z to Naruto and Kimetsu no Yaiba, it’s easy to be lured to this niche without one’s notice. But that’s not a bad thing, because anime shows have witnessed some tremendous licensed games similar to the case of the gaming industry with movies.

A high number of anime games on the 3DS were sadly released exclusively in Japan. Thankfully, an abundance of these can be played from start to finish without any proper knowledge of the language. The list will focus on the best anime games on the 3DS, featuring Japanese exclusives and those released worldwide. Bear in mind that this list will only feature video games based on the original anime or the manga. Additionally, video games such as Persona that have had an anime adaptation will also be featured.

So what are you waiting for? unleash your Haki and come read about the best anime games the 3DS had to offer. Granted, you’re bound to find something to pique your interest. 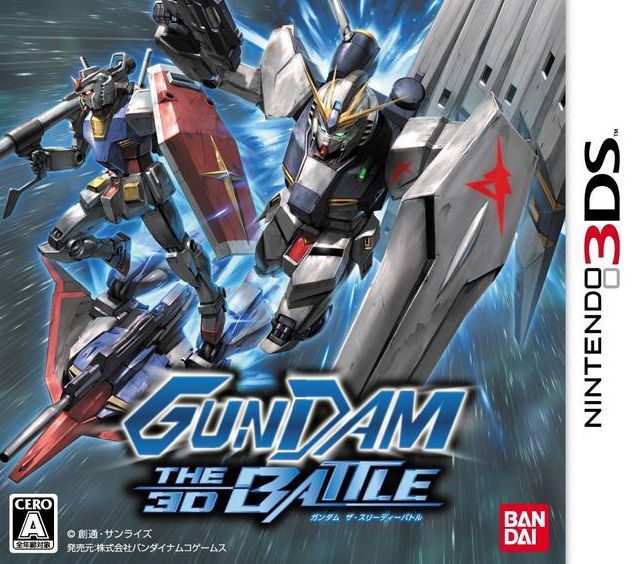 Gundam the 3D Battle is probably a game you didn’t know existed, but if you’re a fan of the series, the name should be familiar to you. The 3D Battle is part of the Gundam Battle series which initially debuted on the SEGA Dreamcast. And to many, the Battle series is a love letter to every die-hard fan.

As far as gameplay goes, 3D Battle is reminiscent of Mobile Suit Gundam: Federation vs. Zeon. Players have several mecha to choose from with a few familiar mobile suits from Gundam Unicorn making an appearance. The game’s premise is simple; shoot and destroy. In that, you shoot or slice enemies with melee weapons via a fixed lock-on either in space, water or land. As you progress, you unlock new deadly mobile suits. Every Mobile Suit Gundam should give this game a try. And as far as things go, you don’t need to understand Japanese to play this one.

One Piece: Unlimited World Red is a fantastic take on the universally acclaimed One Piece manga by Eiichiro Oda. Featuring a fully original story, the game puts you in the flip-flops of Monkey D Luffy and his adventures with his pirate friends.

Unlike previous game adaptations of the series, Unlimited World Red is an open-world beat ’em up. The game allows Luffy to bounce around corners, find treasure, confront enemies using his rubber powers and more.  Now while the game may suffer from several flaws that may not please die-hard fans, Unlimited World Red remains a simple fun game and an example of licensed games done right. 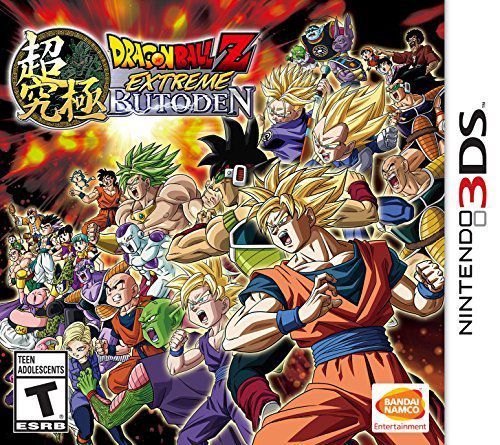 Dragon Ball Z: Extreme Bûtoden is a traditional 2D fighting game featuring over 100 fighters in both one-on-one and team battles. As you would expect from the story, the game is based on the original manga, with players going through various memorable arcs.

Once in-game, Extreme Bûtoden is a pretty standard fighting game. In the sense that, you have a slew of characters to pick up from which you can use to defeat an opponent in action. Players can also pick a supporting character in case they want a helping hand. Despite being a pretty old 2D fighter, the game feels smooth thanks to its beautiful pixel art graphics. The visual effects when landing hits upon your opponent are also incredible. While it’s true Dragon Ball FighterZ remains a better specimen of the genre, Extreme Bûtoden isn’t a bad game at all. Definitely recommended to every Dragon Ball or fighter fan. 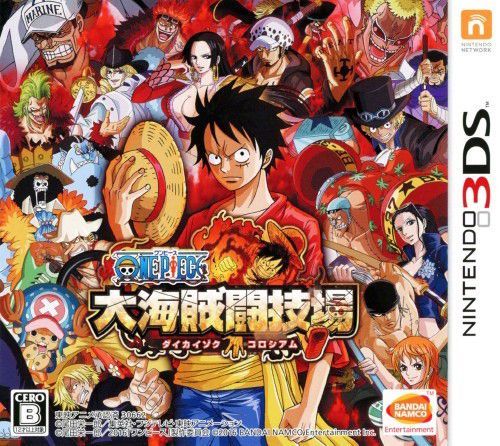 One Piece: Daikaizoku Colosseum is yet another 2d fighter but in the vein of Extreme Bûtoden. However, it was released exclusively to Japan, luckily you’re not obliged to be Japanese to play this game.

Delve through this non-stop fun 2D fighting game featuring up to 23 playable characters and 80 support characters all from the One Piece universe. As you would expect from a 2D fighter, players go through various matches, and the winner is the one standing. The game isn’t a walk in the park as some opponents such as Marshall D Teach and Ace are a pain in the butt to deal with. But if you’re a die-hard fan of the genre, you shouldn’t have any trouble. In fact, you’ll be the main trouble for these opponents. 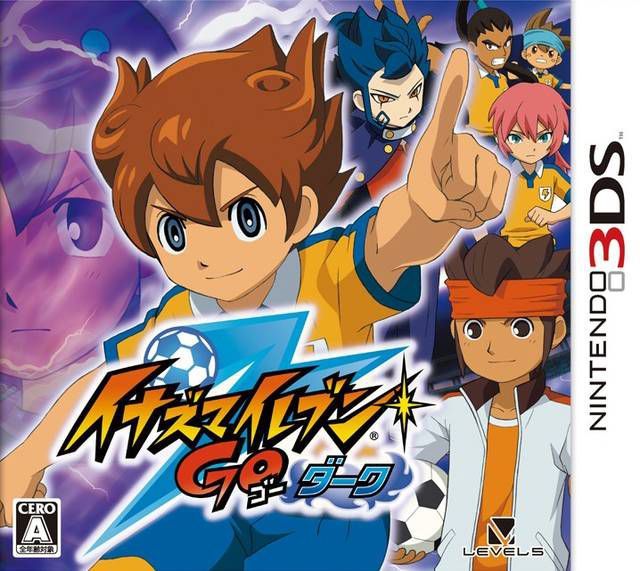 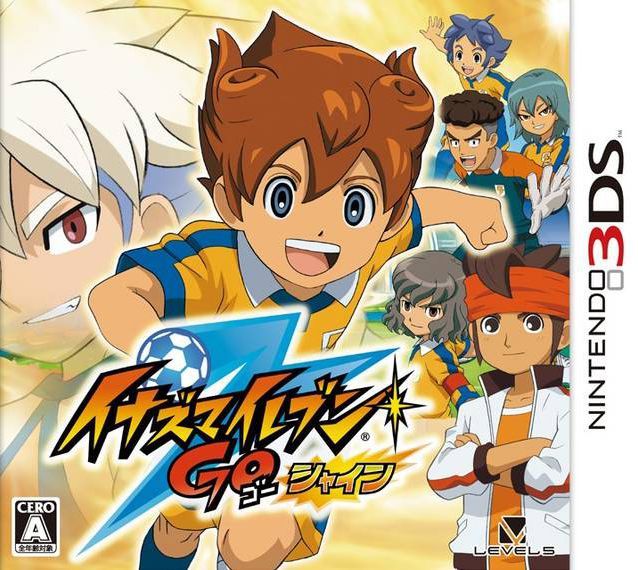 The results are quite fascinating, and it’s safe to say Level-5 are one of the pioneers of the genre. They’ve previously made some of the best RPGs including Dragon Quest 8, but to think they could outdo themselves with Inazuma Eleven was far from predictable. 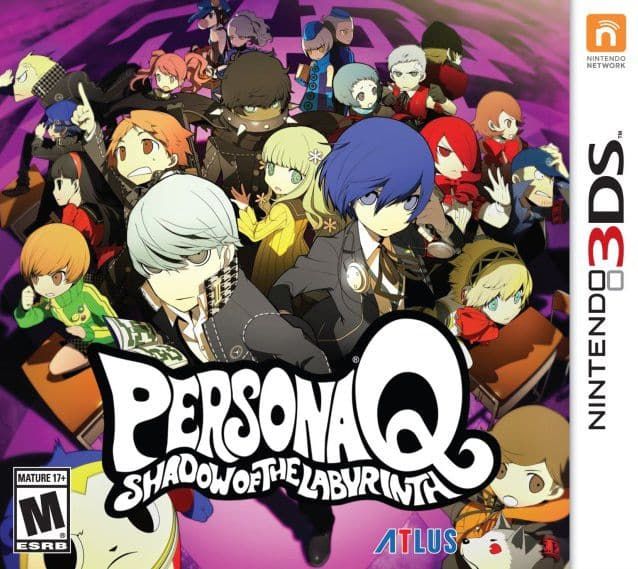 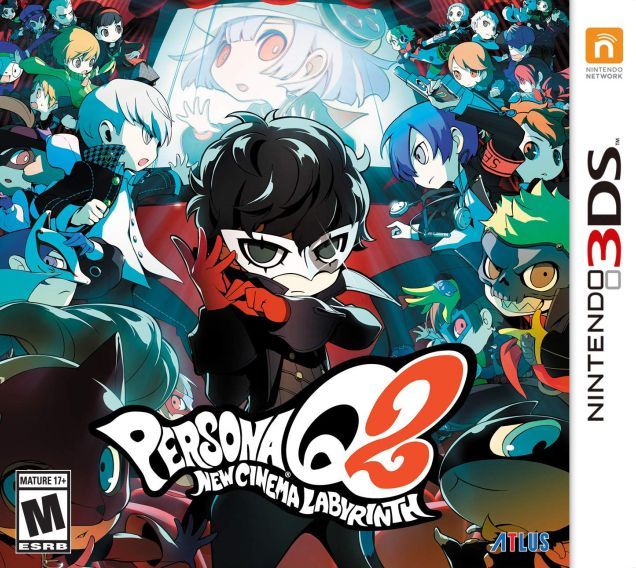 Persona Q duology is a cute take on Atlus’ timeless Persona series. It may look like something every adult will veer away from due to its chibi nature, but at least try it before giving the final judgment. The former is a unique take on a dungeon crawler RPG, but when compared to mainline instalments, it’s obvious it’s not as memorable as its predecessors. Still, it was generous of Atlus to make such a fan-serviced game.

The success of Persona 4 Arena was stimulus enough to push Atlus into making more crossovers including two separate Persona titles once again. This time the company opted for Persona 3 and Persona 4. Featuring characters with deformed chibi appearances, and gameplay similar to Etrian Odyssey, Persona Q was the first entry in the franchise to be released on a Nintendo platform, specifically the 3DS.

Boku no Hero Academia: Battle for All is a 3D fighter and is considered the 2nd game to be part of the Boku no Hero Academia franchise. Developed by Dimps, Battle for All is a completely 3D combat experience, featuring renowned characters from the original mangaka Kōhei Horikoshi. As far as the story goes, the game covers the events of the manga up until the U.A. Sports Festival Arc.

Boku no Hero Academia: Battle for All not only does feature fighting levels but also a couple of 2.5D mini-games. These consist of various missions players have to accomplish in order to progress. Such as capturing every flag on the square, destroying objects on screen, and beating your opponent before time runs out. This is sadly another game released exclusively in Japan. Thankfully, you can finish it from start to finish without any issues. 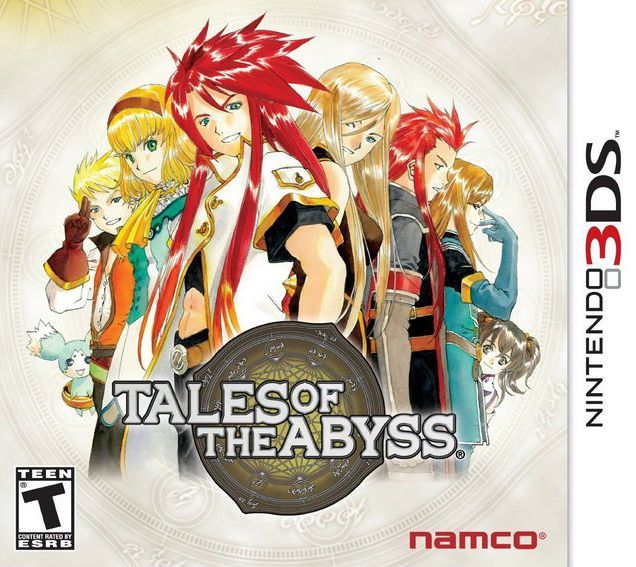 The gameplay is a step above its predecessor, Tales of Symphonia in many ways. Originally released to the PlayStation 2, it took Bandai Namco six years to release a port to the 3DS, and boy was that a surprise. JRPG fans can now experience this masterpiece anywhere. Either in the living room, the garden, or even the toilet. 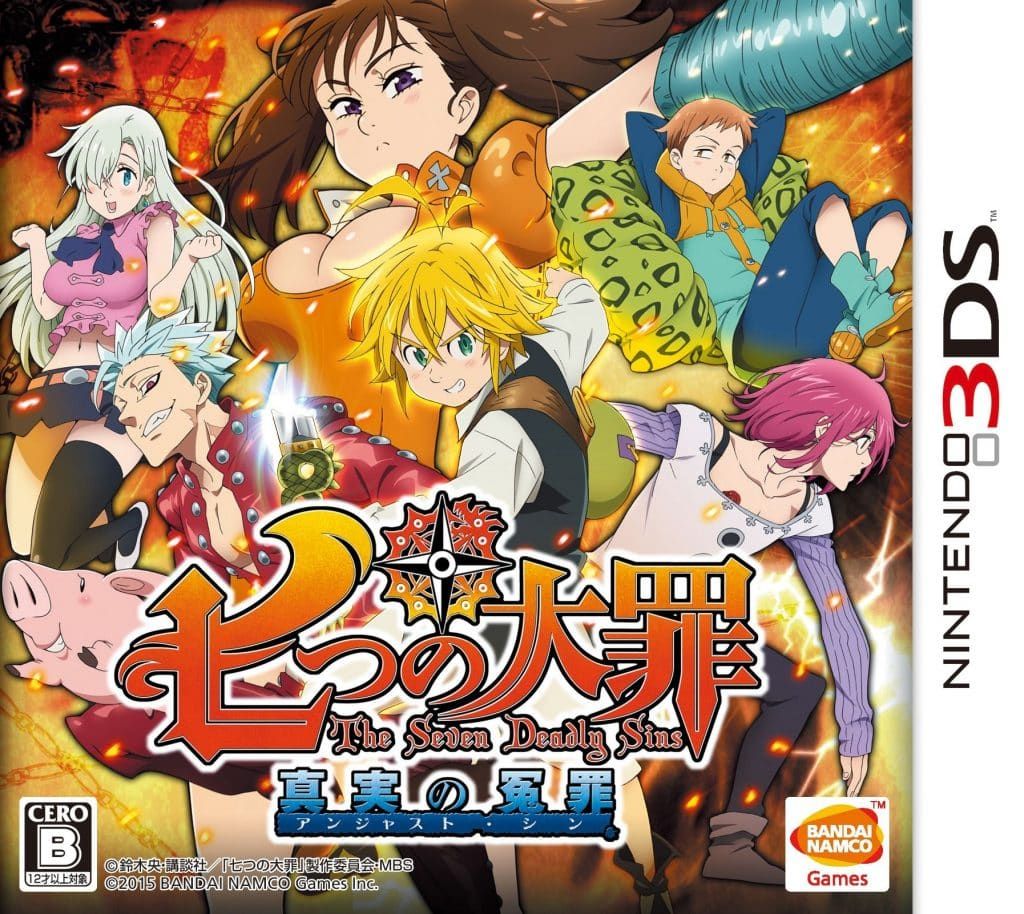 Unjust Sin is pretty short with only 6 playable characters and 5 bosses to confront in order to progress. Bandai Namco could have done a better job with a manga such as Nanatsu no Taizai, but it’s pretty obvious this is a budget title. It won’t please die-hard fans of the show for sure, but for those looking for a short braindead brawler, Unjust Sin is recommended.

Senran Kagura 2: Deep Crimson is a fun hack-and-slash title developed by the same people that brought you the Oneechanbara series. Its story focuses on young heroines wielding katanas on a quest to stop Dogen from destroying Japan.

Unlike Oneechanbara games, Senran Kagura 2: Deep Crimson is more of a Musou title than a hack-a-slash type. The game will throw a myriad of enemies at your face and all you have to do is slice and dice anything that moves. Just a tip of advice, lower the volume when playing the game because these girls are always screaming. 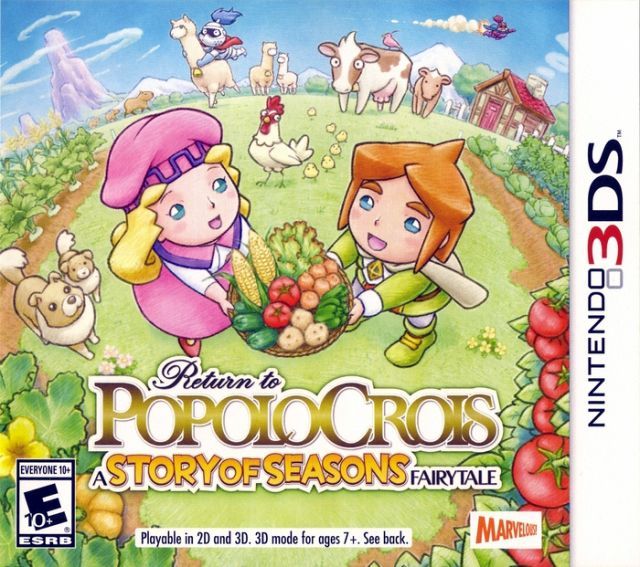 Popolocrois is a cute turn-based farming simulator franchise that probably flew under your radar. Its origins date back to the original PlayStation when the first game was released. Quite unfortunately, the first 3 games were released exclusively in Japan. So it was pretty challenging for fans of the genre to get their hands on any of the originals.

Luckily, Return to Popolocrois is a great introduction to fans that didn’t get the chance to try the original. Its colourful graphics, engaging gameplay and vibrant anime style have something for everyone. Oh, and it helps to mention that the series does have an anime show, which makes it a worthy mention on the list. 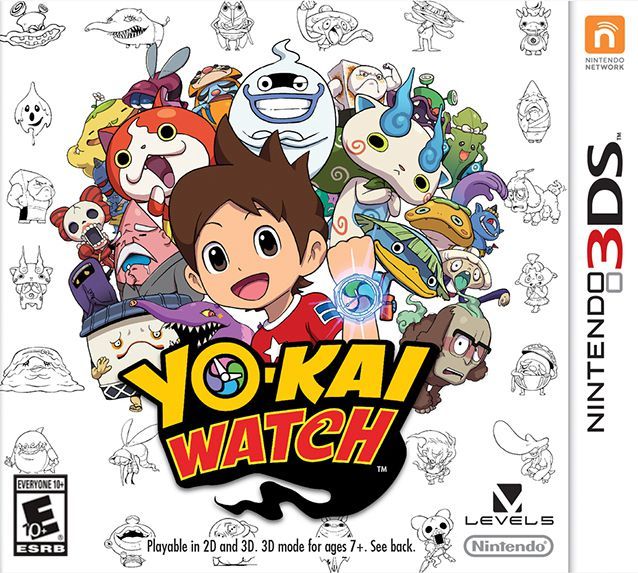 Yo-Kai Watch is Level-5’s ambitious answer to juggernauts such as the Pokémon and Digimon franchises. And while it may not reach the same commercial success these series have garnered throughout their lifetime, Yo-Kai Watch has a few enjoyable moments to offer for every fan of the genre.

Anime fans should give Yo-Kai Watch a chance for its addictive gameplay, the anime-styled graphics and the original storyline. The fact that there are numerous anime and manga adaptations for  Yo-Kai Watch out there is enough to warrant the game’s mention on this list.

Thank you for reading. That’s it for the list.