The zombie games theme was flourishing during the seventh generation of video game consoles, developers made sure to take advantage of the new technology to deliver a new sense of story and gameplay. While the Nintendo Wii was held back by the underpowered spec it has, the great motion controls and the faithful fan base led to the making of some fantastic Zombie titles on the system.

Developers made sure to fully take advantage of the motion controls delivering some fun shooters, including unique game ports and a decent array of exclusive titles. In today’s list, we offer you the best zombie games on the Nintendo Wii system with both popular and underrated titles. 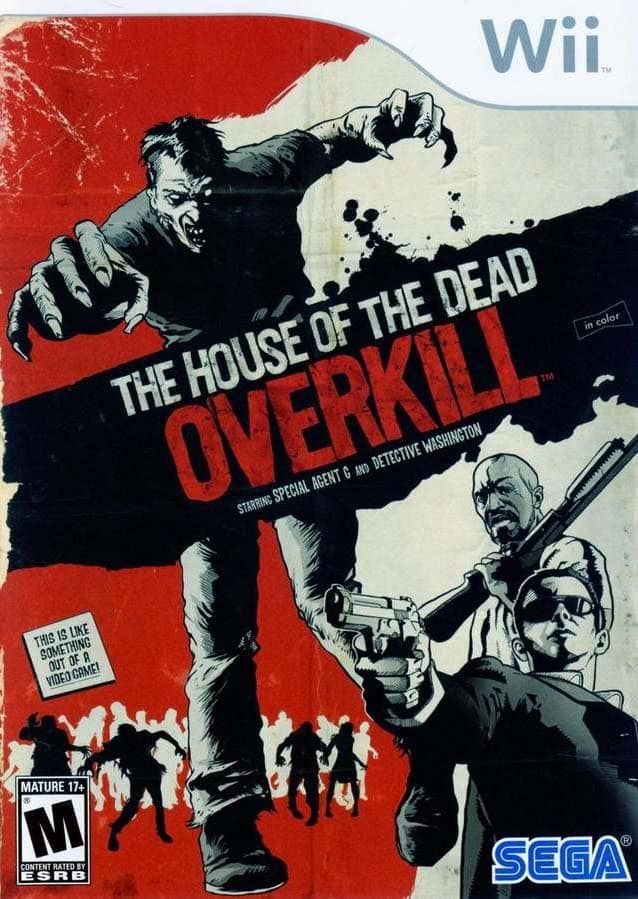 The House of the Dead: Overkill is a first-person rail shooter and is part of the famous House Of The Dead arcade series. It serves as a prequel to the first entry and the first title to be developed exclusively for home consoles. Meanwhile, previous console versions were simply arcade ports. The story follows the hilarious duo agent G and detective Isaac as they try to investigate a zombie outbreak occurring in the small town of Bayou City Louisiana.

Like its predecessor, the game is a rail shooter with characters moving on a predefined path, while both shooting zombies and collecting ammo. The Wii version is clearly superior since players can use the Wii mote as a light gun by pointing at the screen and shooting. The main story mode can be played in both solo or co-op, the goal of each stage is to shoot as many mutants as the player can while trying to avoid the Game Over screen. After each stage, the player can stack up with new guns and upgrades. Overall, this is a must-own by Wii owners let alone Zombie fans who will find themselves right at home with this amazing title.

Call Of Duty: Black Ops is a first-person shooter game, the game takes part in the famous Call Of Duty series and marks the seventh main entry in the same series. While the game’s main mode covers the struggle of the cold war through the eyes of a CIA agent, the side Zombie mode is what made this game appear on this list.

The zombie mode story follows an alternative cold war era where zombie monsters have invaded the pentagon building. The game features four playable historical figures including John F Kennedy and Fidel Castro. The gameplay features an upgrade compared to the previous one on COD World At War with more content and deadlier enemies. The goal here is to survive as many zombie waves as you can, killing zombies and repairing barricades gaining the player more money which can be used to purchase new weapons and unlock rooms. Overall, the game is a lot of fun even with the motion controls, playing solo or split screen is always a joy on the system. 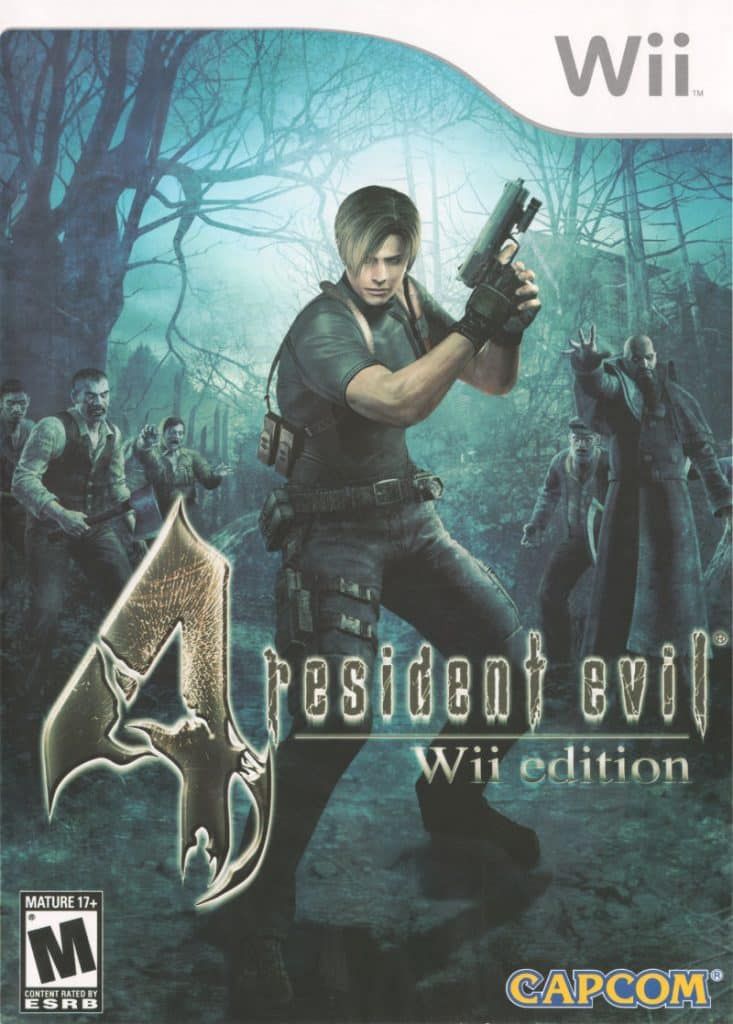 Resident Evil 4 is a survival horror third-person shooter game, this game defined modern TPS shooters alongside the gear of wars series. Agent Leon is back for another adventure, now the president daughter is kidnapped and Leon has to investigate the incident leading him to Spain.The player control Leon from a third-person perspective, the camera change when aiming to give a shoulder view which offers a whole new experience compared to the previous games.

The Nintendo Wii version supports the Wii motion controls fully, offering precise control and a whole new way to experience the game for veteran players. The gameplay focuses on action and shooting elements with additional survival horror features, you have an arsenal of weapons at your service varying from pistols, knives, explosives, and sniper rifles, in addition when aiming you have a laser pointer allowing precise shooting control. The main enemies of the game are zombie-like creatures known as Ganado’s but to the opposite of your typical zombies, Ganado’s are stronger, faster, and smarter qualifying them to use weapons throw projectiles, and many more. While the experience is slightly lower compared to the HDfied version on the PlayStation 3 and Xbox 360 consoles, the Wii version still has a huge advantage with the amazing motion controls that allow a smoother and easier experience for beginners. 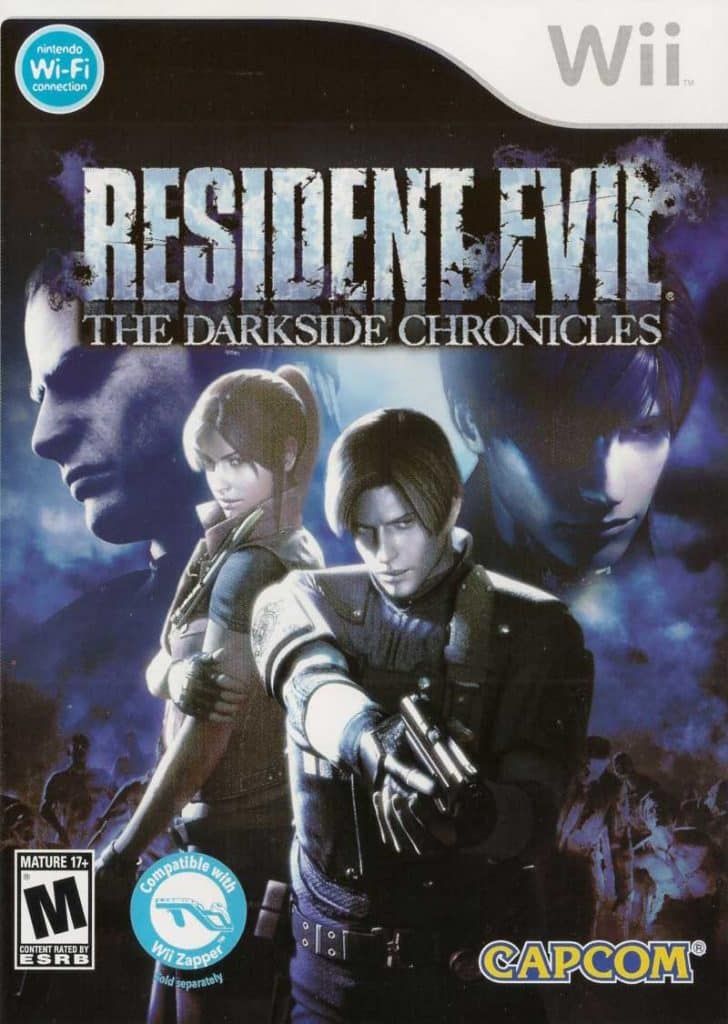 Just like the previous game in the series you shoot Zombies using your Wii mote while collecting weapons and health items. The game feature a dodge mode allowing the player to evade enemies’ attacks by completing a quick time event. Also, the co-op mode is always here to make the game more fun with company. If you play solo the computer will take the other side. Overall, The game is well worth it offering a forgiving entry especially if you’re new to rail shooters. 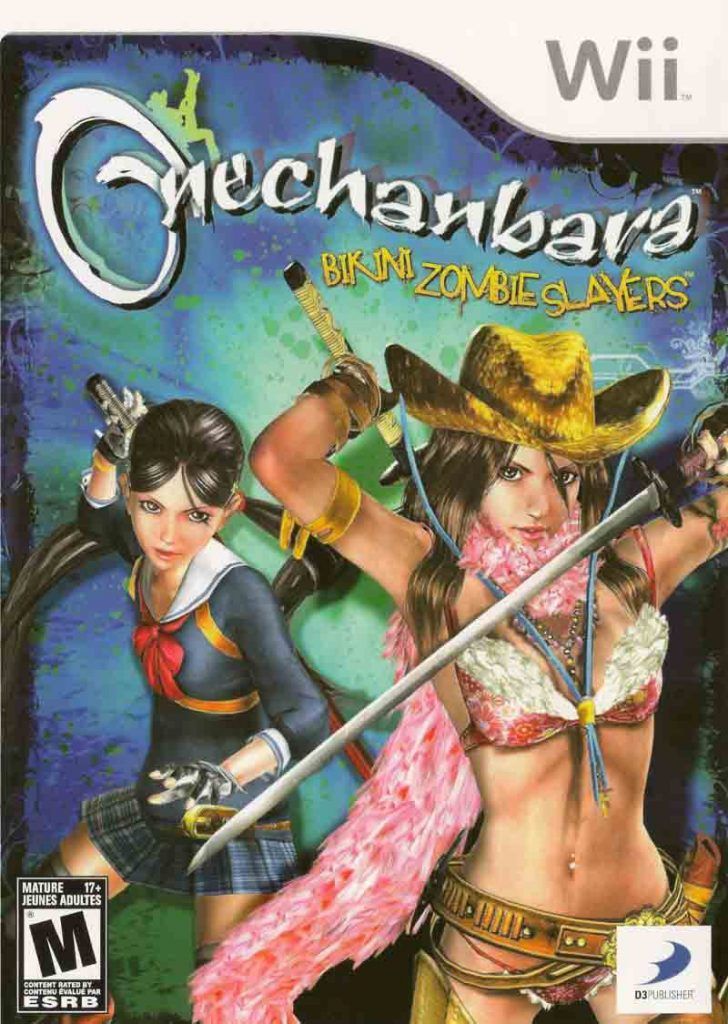 OneChanbara: Bikini Zombie is a hack and slash action-adventure game, the game marks the fourth installment of the OneChanbara series and the first game in the series to be released on a Nintendo console. The story follows Aya a sword-wielding girl and her younger half-sister Saki. Together they venture out to find out the mystery behind their ancestor’s evil blood.

The main objective on each level is to slash every zombie that comes in your way, the player can swing the Wii mote in motion while moving with the analog stick to change the direction of the attacks. The game also features a leveling system where the player can upgrade his character’s ability including Skill, Vitality, Power, and Reach. While the game story can be played solo a split-screen co-op mode is available to add more fun to the package. On the whole, the game is well worth it especially if you enjoy Japanese games, everything from the story to the over-the-top gory moment makes this game more like an anime or manga adaptation. 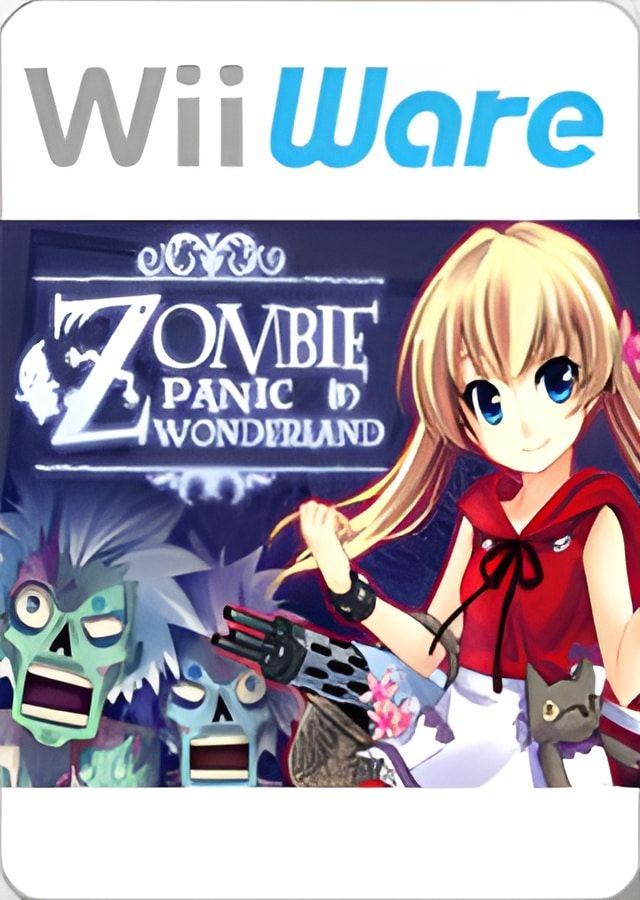 Zombie Panic in Wonderland is a third-person arcade shooter, the Wii version was released exclusively for the WiiWare service. The game world represents a multiverse merging multiple fable figures into one zombie apocalypse. The players control one of these figures such as Momotaro, Snow White, Little Red Riding Hood, and Alice from Alice in wonderland as they fight their way shooting hordes of zombies.

The game is seen from a third-person perspective where the player shoots the enemies while aiming with the Wii Mote at the screen. The player movements are very limited allowing the player to only move left and right, moving sideways allows the player to dodge incoming attacks and collect new weapons and upgrade. Also unique to this game, not only the zombies can be targeted but the surroundings are fully destructive, the player can exploit it by hitting the enemies with the fallen debris of a building or a broken tree. Overall, the game is a nice little gem, despite the cartoonish graphics which i don’t like, the gameplay makes up for it especially the Wii motion controls which make this version the definitive way to experience the game for me. 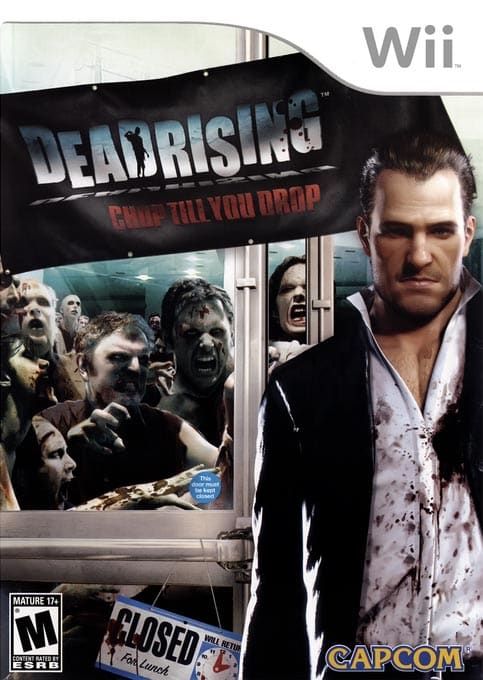 Dead Rising Chop Till You Drop is a sandbox action-adventure game, the game is a reboot of the first Dead Rising game taking advantage of the Wii motion controls and marking the first game in the series to be released on a Nintendo console. The story follows the tale of Frank West a photojournalist who seeks to discover the mystery behind a zombie outbreak in the fictional town of Willamette.

The game is seen from a third-person perspective, where Frank explores a huge mall swarming with Zombies, frank can use a huge variation of weapons including melee and guns. While the story is identical to the original game developers made some crucial changes on the gameplay side. First, now Frank operate from outside of the mall security room taking mission from Otis, Brad, and Jessie. The clock countdown was completely removed from the story missions alongside the free-roam aspect. Also, the game takes advantage of the Wii mote encouraging the player to use firearms more often with generous ammo and a new gun store. On the whole, the game is well worth it, combining the Wii motion controls with a bloody ride and a memorable cast. 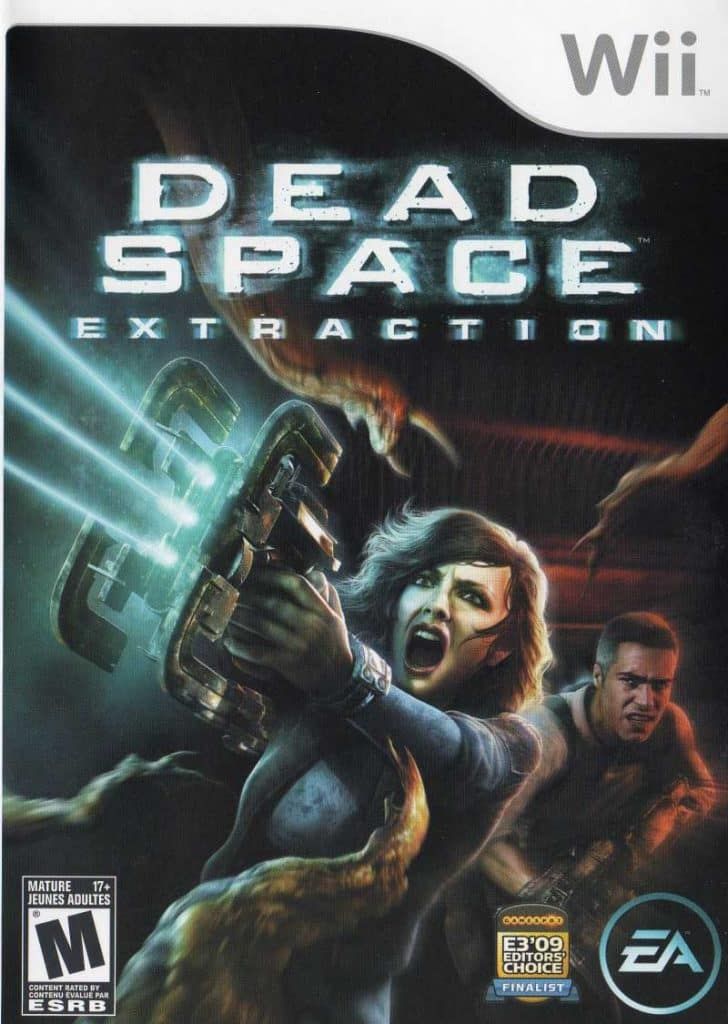 Dead Space Extraction is a science-fiction rail shooter with some horror elements, the game is a spin-off of the famous Dead Space science-fiction series. The game takes place prior to the event of the original game, following a group of four survivors as they try to escape a Necromorph outbreak on the planet Aegis VII.

The game is seen from a first-person perspective with rail shooter elements, the player point at the screen with the Wii mote to shoot the enemies with various weapons. You take control of various characters through the campaign which is divided into multiple chapters, your movements are restricted most of the time allowing for some mild movements such as choosing a path. The game features old weapons from previous games in the series while introducing some new ones. Just like the original game all weapons can be upgraded. There is a lot to discover here, especially for previous players of the series, the game is fast-paced, challenging, and full of crazy plot twists. 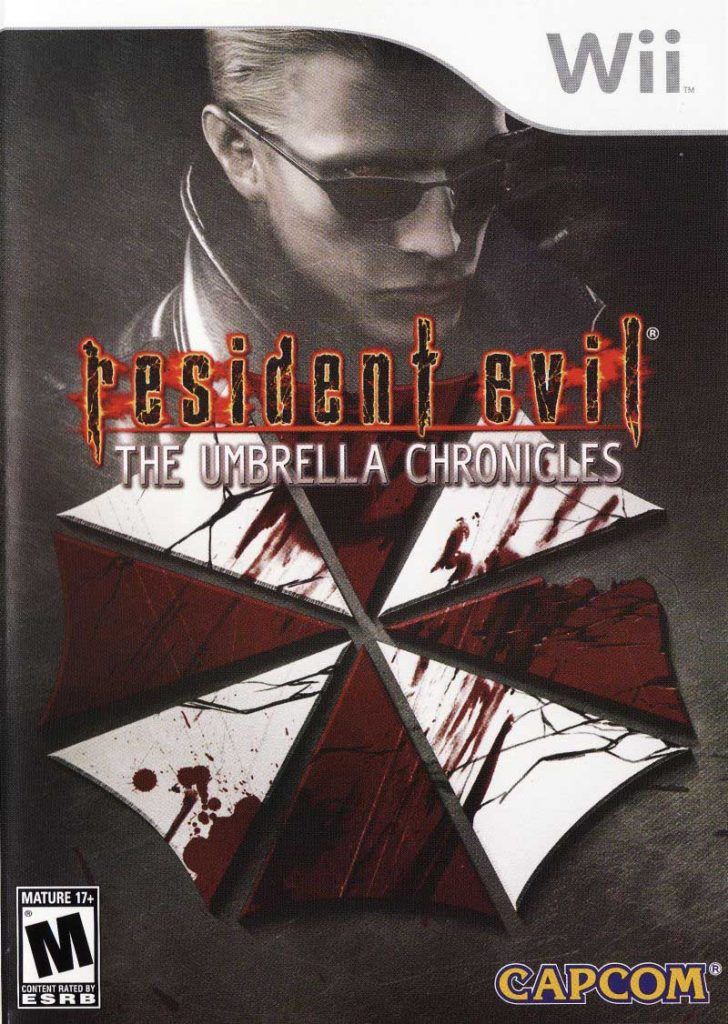 Resident Evil The Umbrella Chronicles is an on-rail light gun shooter and a spin-off of the well-known Resident Evil series. The game feature several scenarios following various plot elements from the previous games, up to nine playable characters are available through the campaign including Rebecca Chamber, Jill Valentine, Hunk and many more.

You can use the Wii mote to aim and shoot zombies across the screen while picking various weapons and health items, there are some optional choices you can make to choose various paths on your mission. Camera wise you have some flexibility allowing you to look around in a limited space. After each stage, the player can use stars to upgrade weapons. For co-op lovers, there is a lot to appreciate here as you unlock co-op mode after finishing the fourth mission. 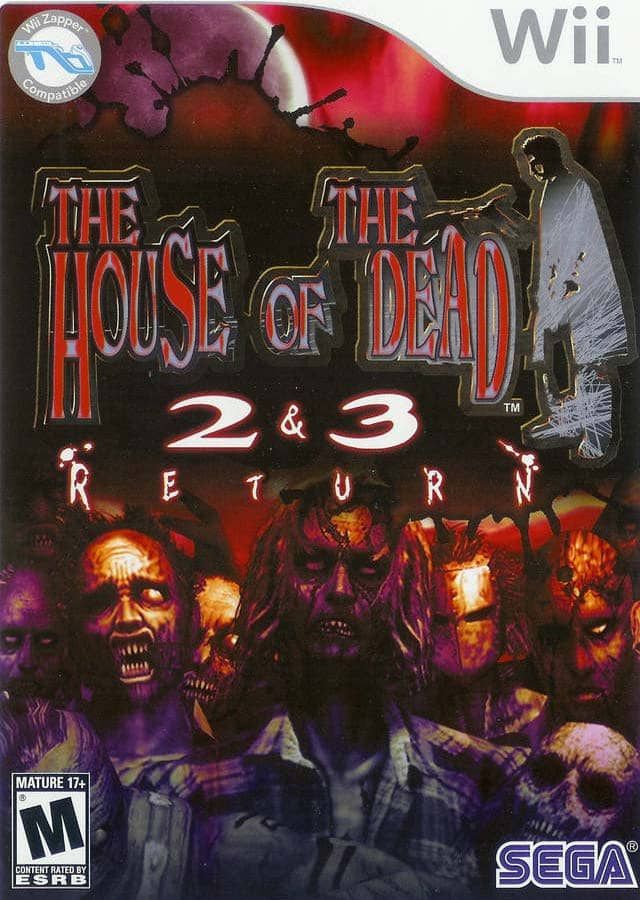 The game is seen from a first-person perspective where the player aims at zombies appearing on the screen, the Wii mote can be used as a light gun aiming at the screen. Different from the original arcade games, weapons can now be used as melee attacks to block the enemy blows, but it requires a reload after each attack. Also, a new hardcore mode is here for experienced players, the enemies are tougher and your shots cover a smaller range. In general, the compilation is well worth it offering two amazing classic games with updated controls.