Gunplay takes center stage in Warzone, and that means you’re only as good as the equipment you bring into battle. That’s why we’ve compiled this list of the optimal weapon and attachment combos for a variety of playstyles. Whether you’re a deadeye marksman who prefers to blast heads from afar or a lunatic with a semi-automatic who dashes in and out of firefights with reckless abandon, we’ve got the perfect loadout for you.

A loadout consists of your primary and secondary weapons, your perks, attachments and supporting equipment. Loadouts appear in-game as care packages that you can purchase with cash. The right loadout can turn a match around, taking you from barely scraping by to absolutely dominating your opponents. 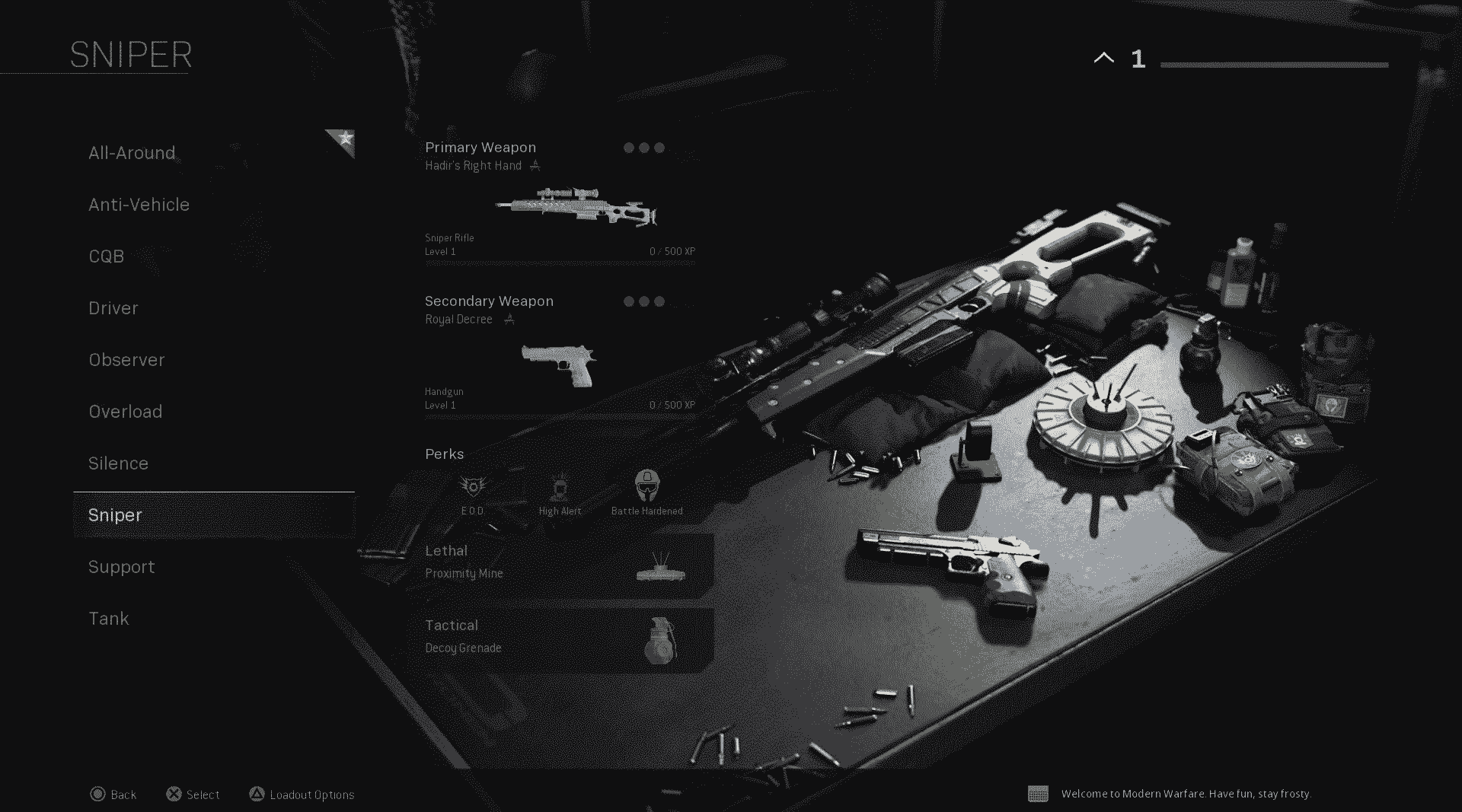 Warzone gives you a few default loadouts to start with, but if you really want to up your game, it’s crucial that you design your own. This is especially important if you want to specialize your loadout for utility roles, as the default options are general-purpose loadouts and aren’t optimal for special case uses.

The Loadout customization screen is accessed from the Warzone main menu. Open up the Weapons menu and click the Edit Loadout option where you’ll find 10 loadout slots.

Before you get started customizing a loadout, you should know what style of play you enjoy and what weapons and equipment you have been most successful with. The better you know yourself, the smarter you will be in deciding the loadout you need to maximize your chances of survival and victory.

The weapon/attachment combo you choose depends on your personal play style preference. We’ve compiled the best weapon/attachment combos for some of the most popular guns in the game. If you already know what weapon you’re looking for, feel free to jump to the loadout for that weapon, otherwise we recommend experimenting with the different loadouts to find out what suits you best. 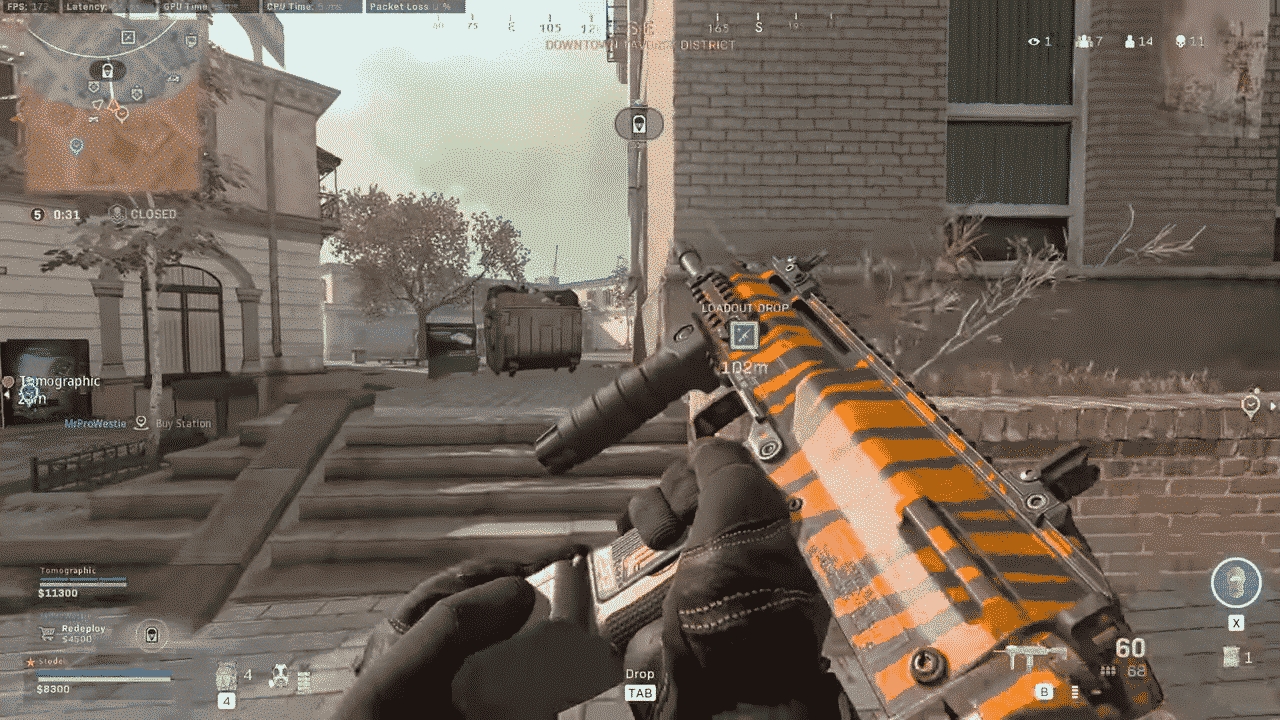 If you’re the type of player who likes to be at the heart of a firefight, a proper SMG loadout will allow you to deal insane damage at point blank range. These weapon/attachment combinations offer maximum mobility so you can weave in and out of engagements with ease. For optimal play, you’ll need an intimate understanding of the nooks and crannies of each map — potential flanking positions, entry points, and escape routes.

The MP7 is easily the best SMG in Warzone, offering an incredible fire rate, unbeatable mobility, and excellent accuracy. There isn’t a weapon in the game that is as consistently deadly at close range than the MP7. It’s incredibly accurate at mid-range as well, though its damage drops off significantly beyond 10m so your bullets only tickle at range. You’re better off closing the gap and getting in the enemy’s face.

This is our recommended MP7 setup though you only really need No Stock and Extended Magazines. No Stock turns you into a speed demon, giving you higher movement speed and an extra 20% to Sprintout, whereas Extended Magazines gives you 60-round magazines so you’ll be reloading a lot less.

The game plan is simple: identify where the enemy is positioned and run at them. Ideally, you won’t want to take the direct route — beelining for the nearest tango at full sprint is the easiest way to get yourself killed. Instead, use your understanding of the map’s layout to identify roads for a potential flank. Once you’re right next to them, hold down the trigger and don’t let go!

With just an SMG, you’re a liability to your team at medium to long range. For this reason, many people who prefer this in-your-face playstyle also equip the Overkill perk with a sniper or assault rifle in the secondary weapon slot. This also gives you the flexibility to switch between playstyles — fire from afar or go in close for the kill — but keep in mind that having a big gun on you will greatly reduce your running speed.

If you really want to double down on the berserker playstyle, the MP5 could be a better option. It’s much worse than the MP7 at range, but it makes up for it with a better TTK. The MP5 is definitely a weapon for special use cases; unparalleled in buildings and close combat but virtually unusable in any other situation.

It’s important to note that while the MP5 does kill faster than the MP7, its Extended Magazines only go up to 45 rounds, meaning less leniency for wasted bullets. Keep your look sensitivity high so you can rotate and adjust your aim more quickly.

Unlike the MP7, whose effectiveness at range can be decently offset by attachments, there isn’t much you can do to make the MP5 viable at anything beyond 7.5m. While you can justify not equipping Overkill with an MP7, it’s a necessity with an MP5 loadout if you even want to get within striking distance of your SMG. 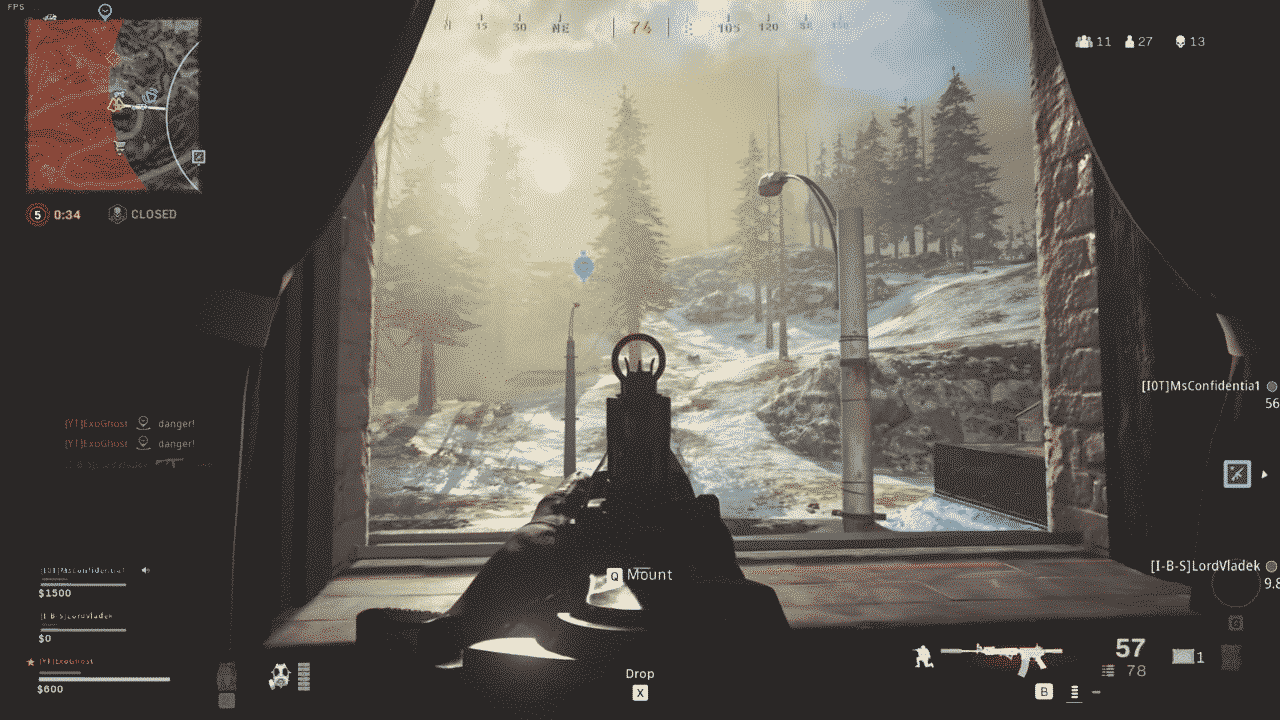 The M4A1 is the ideal gun for players who like to fire off rounds from 30-40 meters out, popping in and out of cover as they carefully push forward. It’s also the most rounded weapon in the game, ensuring a consistent, low-risk experience, if a bit vanilla.

This is an all-purpose loadout that’s useful in a wide variety of situations. It’s deadly at mid-range and fairly decent at distance, and with the attachments we’ve chosen, it has incredible accuracy and manageable recoil.

While excellent at mid-range conflict, the M4A1 does poorly in close- and long-range situations. If you ever find yourself in a situation where you’re brushing noses with the enemy (and you definitely will!), whip out your M19 pistol for a fighting chance.

Additionally, unlike most weapons, the M4A1 deals equal damage for all Torso hits, regardless of where the bullet lands. This means you don’t have to be particularly careful of where you aim — just place your crosshair over their upper body and let the bullets fly! It also means that if you’re a skilled shot, you’d get more value from other weapons that reward accurate fire with more damage-dealing potential.

The Oden is for the player that prefers avoiding the epicenter of combat, laying down fire from a safe distance. The Oden offers a decent compromise between the long-distance threat of a sniper rifle with the mobility of an assault rifle. Although you do have the potential to kill, your primary job is to send enemy squads running for cover by blasting apart their armor.

The Oden’s useful range sits somewhere between a DRM and an AR, meaning it excels in medium-long- to long-range gunfights. It’s deadlier than the M4A1, but requires a lot more precision and care to utilize properly. Unlike the M4A1, you must aim for the Upper Torso if you want to maximize kill potential — higher risk, greater reward.

With the ODEN Factory 810mm attachment, you sacrifice a bit of your mobility for greater range and recoil control. It also fixes one of the Oden’s biggest weaknesses: its bullet velocity. Keep in mind, the Tac Laser offers excellent Aiming Stability but your laser will be visible to observant spotters. Remember, you’re not a sniper — you shouldn’t be hunkered down in one place for too long; take your shot and move on.

The horrible recoil pattern makes it a nightmare to use at close range, which is why we’ve recommended a pairing with the P90. This means you’ll need the Overkill perk. Ideally, you’ll always be at a safe enough distance away from the firefight to never have to use the P90; it’s really for emergency situations where the enemy gets the jump on you. If you’re confident in your abilities to avoid direct conflict, then you can swap the P90 with a pistol and replace Overkill with another perk.

Warzone is a game of wide open spaces, making sniper rifles very effective. They’re excellent at long-range and a well-placed headshot can give your squad a massive advantage at the start of a firefight. If you’re a great shot, the only way anyone will get near you is if they charge you from behind.

It doesn’t matter what you put on a sniper rifle, it will always be cumbersome and greatly reduce your mobility on the field. For this reason, you’ll want to equip attachments that maximize your deadliness at long distances. You’ll spend most of your time picking off targets at the outer circumference of an engagement, just at the edge of your maximum range.

When it comes to sniper rifles, you’ve only got two real options: the ARX-50 and the HDR. Everything comes down to personal preference, but the ARX-50 has a faster fire rate while the HDR has higher bullet velocity. The HDR is easier to consistently hit targets with as the faster bullet velocity means you don’t have to worry as much about bullet drop, but the ARX-50 lets you fire almost two times quicker, meaning it matters less if your shots don’t always hit their target.

Both the HDR and ARX-50 can take down a fully-armored enemy with a single headshot. The reason we recommend the HDR over the ARX-50 is due to its attachments — with this setup, bullet drop and travel time are non-factors.

Remember that the Tac Laser is visible to enemies, so don’t spend too much time staring down your scope. Scan the area for movement then zoom in for the kill. Remember, you’ve revealed your position the moment you take your shot, so either be the first to pull the trigger or fire when your targets are already engaged in combat and focusing on something else.

The Overkill perk is obligatory with any sniper loadout; you’re pretty much worthless at anything closer than 35m. Ideally, you’ll want an SMG that you can switch to so you can gun down any nearby targets when caught in a sticky situation. Taking an AR might be the deadlier option, but if the enemy is at medium range, where ARs are most effective, switching to another weapon can give them the time to get in close. At that range, you’re better off trying to take them out with your sniper rifle. 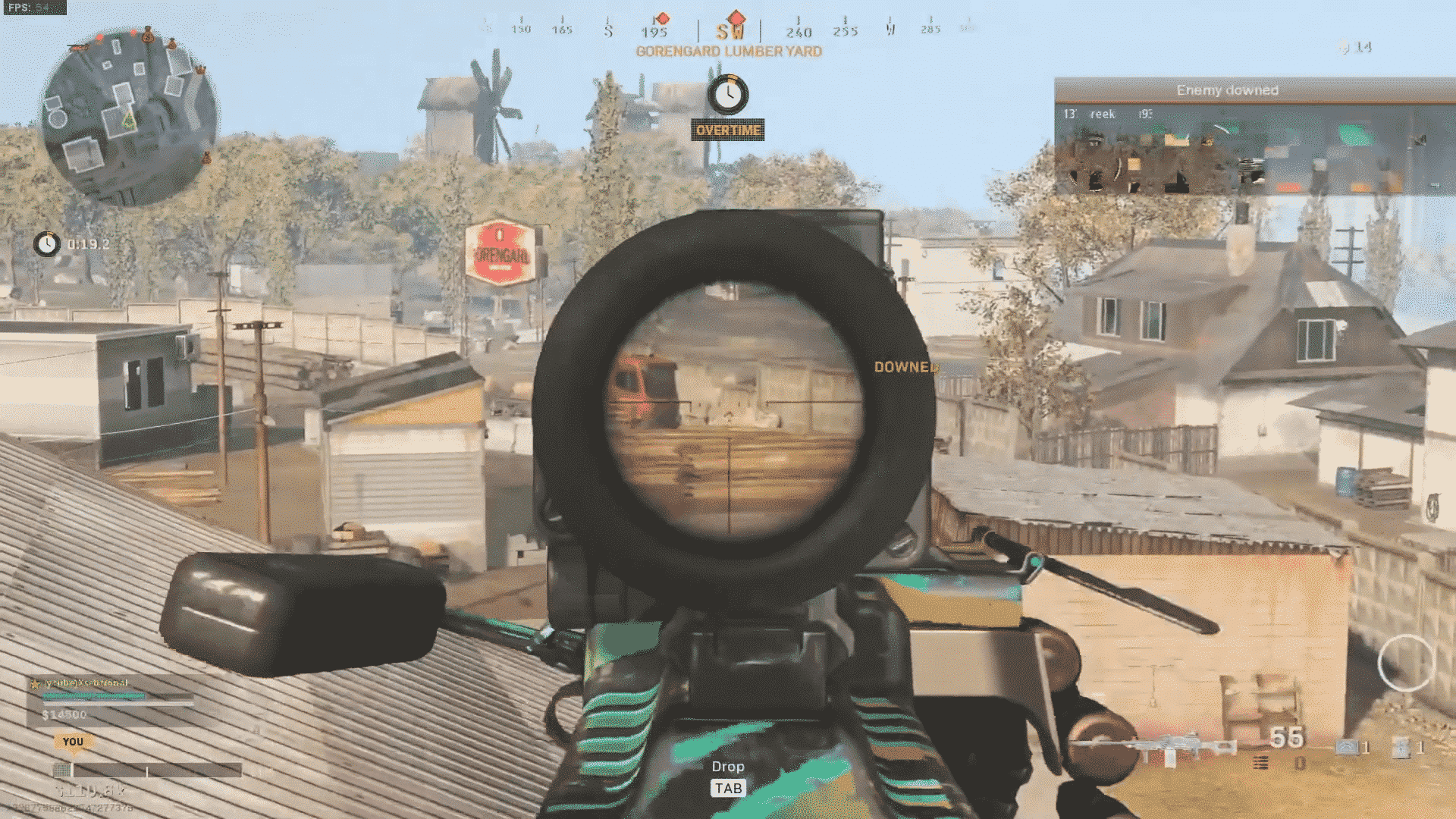 If you don’t want to waste brainpower on things like positioning and aim, and if you just want to put holes in things, an LMG is the gun for you. As in most shooters, LMGs are the weapon of choice for brutes, an inelegant weapon that requires zero finesse. You don’t need much to use them, just aim in the general direction of the enemy, hold down the fire button, and spray bullets until you’re empty.

If you insist on using an LMG, make it the PKM. With this setup, you can actually be useful at medium range. If anyone makes the mistake of getting close to you without cover, the low TTK guarantees you’ll tear them to bits and pieces. You’re slow but you hit like a ton of bricks; in the right situation — and with skilled teammates shepherding your opponents into your line of fire — you can clear out entire squads in seconds.

These are our recommended weapon/attachment combinations for some of the most popular weapons in the game. You can pick any of them and know that you’ll have a fighting chance on the battlefield. Remember though, that the beauty of the loadout system is that you ultimately have the final say in what goes onto your gun. We encourage experimentation and tinkering — none of these setups are set in stone; play around a bit with the different attachments and you’ll find the right setup for you.

What’s your weapon of choice? What weapon/attachment combinations are your go-tos in Warzone? Share your opinions and loadouts in the comments below.