A Season server is a recent event in the life of BDO that is designed to make things easier for old and new players by providing events and rewards to its participants that greatly facilitate the leveling and gearing process. It is very popular with the players as we get a lot of rewards when we take part in it and it gives the new ones a great opportunity to catch up both in terms of level and equipment.

Black Desert Online’s next season event, the 2021 Winter Season, has begun! In this guide, we have gathered all the useful information about the event so that you can get the most out of it as quickly as possible.

Here you will find all the important dates related to the event, how this season is different from the previous ones, and we will also give you fast leveling and gear-plan tips. In the end, we’ll look at what rewards are available and what to choose if you have to choose, personally to whom what is good.

I highly recommend our previously published Ultimate Guide to Season Characters, where you will get an even more comprehensive picture of all the content related to the seasons, since here we will only focus on the 2021 Winter Season.

It has been common in previous seasons to get a new class at the same time as the event. This time however, PA has placed a bigger focus on the class reworks.

This event offers you the best catch-up opportunity in terms of both level and equipment. If you haven’t made a seasonal character yet, do it because there’s no other option in this game that will give you such an advantage like this! It holds benefits and rewards for you that make it terribly worth doing, plus if you successfully “finish” the season, you’ll be richer in a gaming experience that will be very easy to build into later. In the end, of course, you can keep this character, and it will become a regular character, along with all the equipment you acquire.

In addition to this guide, I highly recommend our already published Season Character Guide because I’m sure you’ll find some very useful information about the season in general in this as well!

All Changes in Winter Season (2021) from Previous Seasons 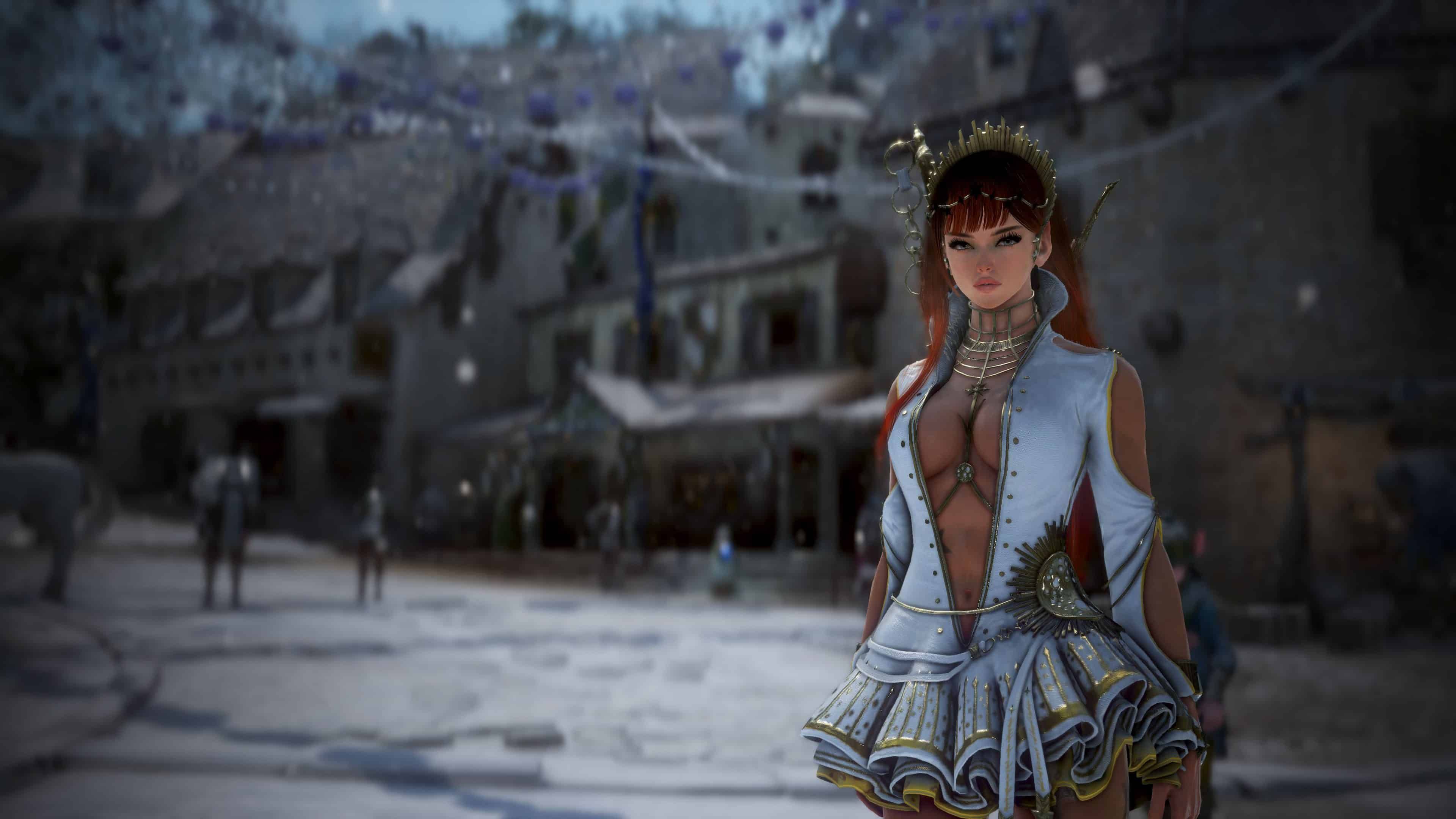 Let’s see what’s different from previous seasons and what hasn’t changed. These contents have been found in almost every season so far, so let’s run through them with a quick overview. You can read about this content at length in our Ultimate Guide to Season Characters.

In the table below we will collect the gift coupon codes issued during the season and contains season-related items. The table is constantly being updated, so it will be worth visiting again.

If you do not know how to redeem these codes, visit this official GM note, here you will find a detailed description of it. Or In-game ESC menu -> Adventurer Support (F11) -> [Use Coupon]. 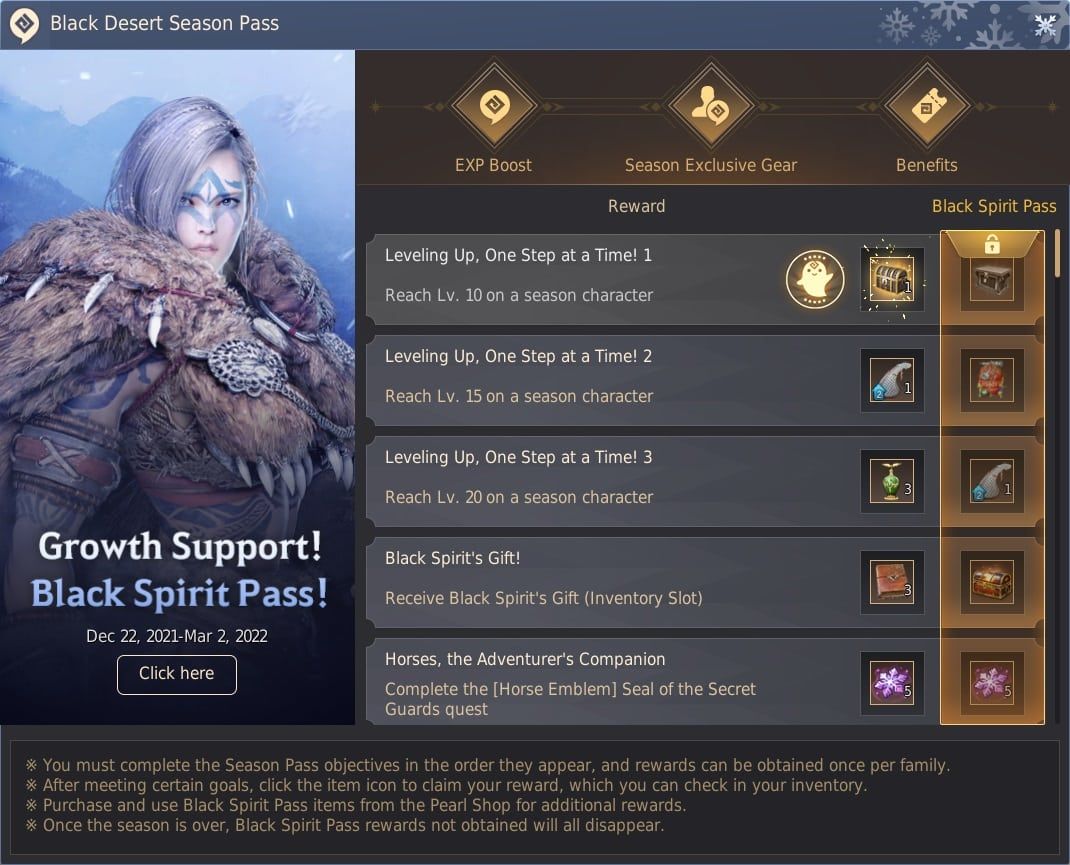 The season pass is located in the upper right corner, its window will open if you click on the Season Pass icon. The rewards in the first column are available to everyone for free, while the rewards in the second column can only be unlocked if you purchase the

This schedule is meant to guide you through the developmental stage of your character and reward you with plenty of rewards for it. In both cases, the rewards must be activated and taken out one after the other. However, it is not mandatory to complete the missions in order, the system will save them in case you can activate them in order later. 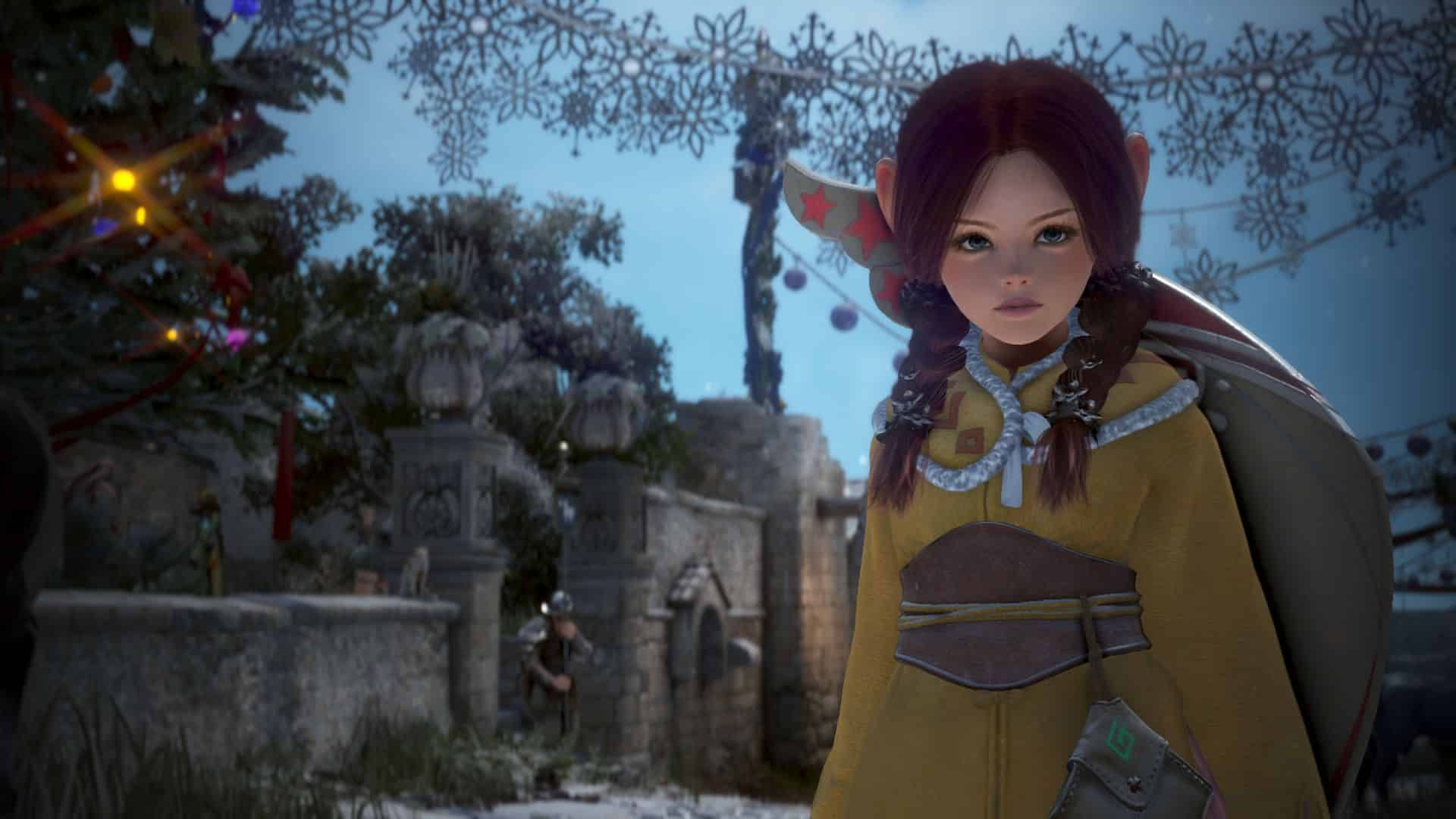 In this section, we will try to gather the things you need to know to be able to progress effectively during leveling as a beginner. When the game starts at Ancient Stone Chamber, from there your task is to move along the main quests. As with most MMORPGs, these quests are designed to guide you through the game as you progress at the right pace. It’s important to mention that in the case of seasonal characters, this is complemented by the Season Pass, which fits perfectly with your quests, your current level, and your gear as well. So you have to take the Season Pass with the main questline (which of course is not mandatory, only recommended).

Servers have been created specifically for seasons (Season 1-4 and PVP), with additional Combat EXP and Skill EXP bonuses for adventurers. Many activities related to the season can only be accessed on these servers, and the EXP bonus is also worth leveling here. However, this is not mandatory. On the journey, you will get Scrolls that give you extra combat EXP. It is worth using them, these are added to the EXP bonus provided by the server.

You may sometimes need to grind, in which case just open the Map (M) and look around to see what level of mob areas are nearby. Under the name of each monster area is indicated the level at which it is advisable to visit there, so it is easy to see where to start. But it also means that your gear must evolve with you. The Season Pass is a good help in this because it requires you to improve as well. At the beginning of the game, it’s worth “trashing” everything, everywhere and from everyone, constantly changing your gear from worse to better. Your important gear will be Naru and Tuvala ones anyway, I’ll write more about that in the chapter below.

If you have a super nice friend, you can ask him to power level up in one of the higher-level areas and you will go back to do the main quests afterward. It’s a quick way, but I think the game mechanics get worse.

You’ll be somewhere around level 57 by the time when you should start gathering EXP through quests. You have to complete a series of quests to get to the

Chenga – Sherekhan Tome of Wisdom, which is an Adventurer’s Tome which gives a Combat Grade EXP obtained through Quest Reward + 30% bonus. I used to start this around Calpheon City, I have to visit the surrounding nodes and look for Story Quests and complete them. Such quests can be found from Calpheon to Kamasylvia and then to Duvencrune. However, if you get stuck, there are plenty of very helpful tutorial videos on the internet about this where you can learn more about this process. This whole process can be replaced and or supplemented with Mirumok Ruins farming/leeching. 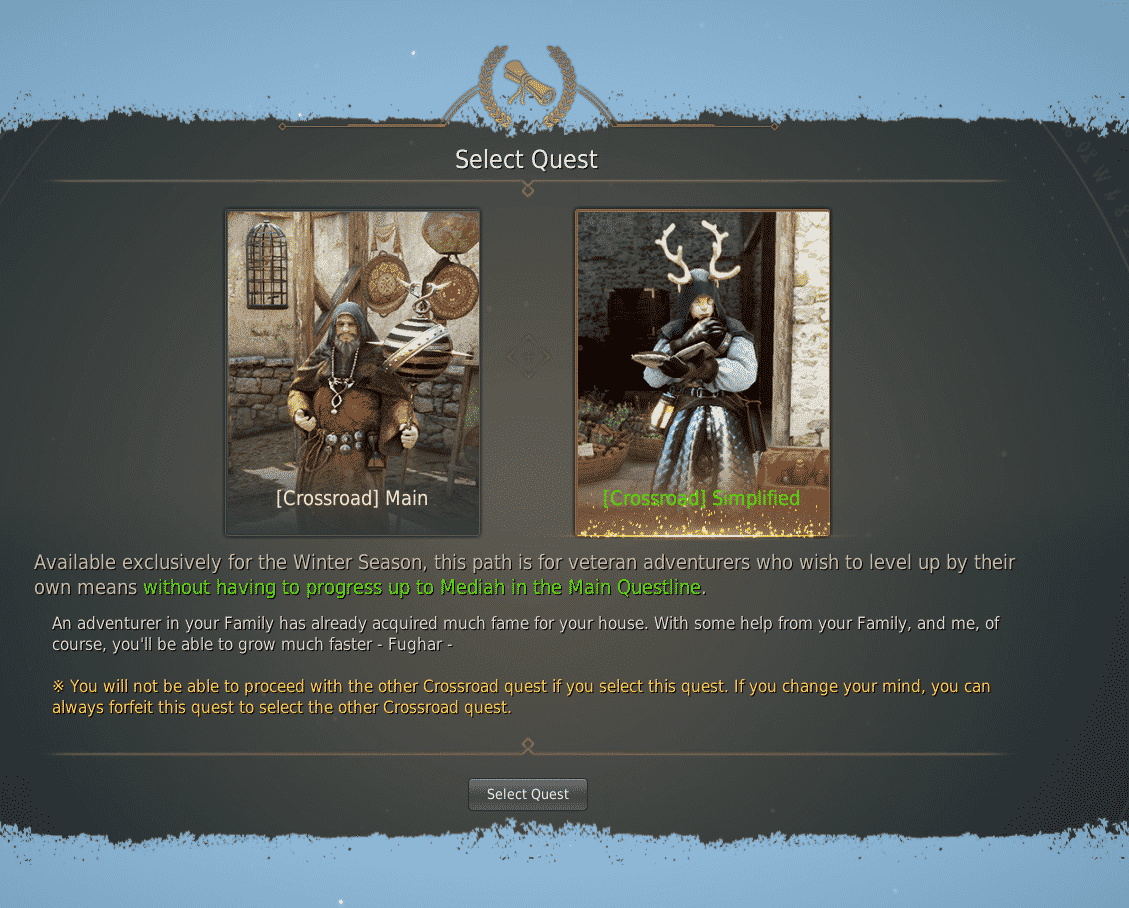 Since skipping Main quests is now available, any veteran can breathe a sigh of relief. This is available to those who have already completed at least once the entire Mediah main questline and the quest “[Pet] Bareeds’ Junaid” from Bareeds III. When you arrive in Velia with the main quests, NPC Alustin will offer you two crossroads: the main quests and skipping them. Pay close attention when you get here because your decision cannot be changed. This chain of quests is time-saving and all rewards can be earned with it.

This quest gives you a Fughar’s Memorandum – Chapter 1, this is the first part, and then we finally come to the end through 11 chapters. Follow the instructions in the quests until you reach the last chapter. The last quest of the simplified questline, “[Season] Fughar’s Memorandum – Chapter 11,” will make the character have fulfilled the same prerequisites of a character who has completed the Mediah main questline and allow them to start the Valencia questline.

Special characters deserve special gear. Since Season characters cannot equip regular gear, you have to equip the character with Naru and Tuvala gear. Only the Asula jewelry set is an exception to this, as well as the main story quest’s reward items. Items that can be used are marked with a yellow Black Spirit mark.

So Naru Gear will come after using all the equipment you have collected. You get these during the main quests (at the end of the main story quests in Serendia and Calpheon), and Fughar gives them to those who skipped the main quests (Naru Armor, Gloves, Shoes, Helmet, and a main weapon).  In addition, it can be obtained from other sources: as a monster drop in Serendia, Calpheon, and Mediah or through exchanging Beginner Black Stones.

Naru gear can also be enhanced with Beginner Black Stones. You can obtain them from the main story quest, or by heating regular black stones to turn them into Beginner Black Stones. You don’t need to use failstacks to enhance them and don’t use Cron Stones for enhancement at all, it would be a big waste. Naru armor and weapons can be enhanced up to PEN and accessories up to TRI.

Once you reach PEN Naru armor/weapons, you can exchange them for Tuvala PRI (I) gear in your Inventory (I). The requirement is a finished Mediah main questline or completed [Special Growth] Fughar’s Memorandum – Chapter 8 in the case of skipping main questlines.

In addition to the exchanging, to get Tuvala gear you will need Tuvala Ores. You can get Tuvala Ores by defeating monsters in Valencia, Kamasylvia, Drieghan, and Sycraia Underwater Ruins. When you have collected enough, you can take your Tuvala Ores to blacksmiths to exchange them for weapons, defense gear, or accessories. Blacksmiths NPCs can be found in most large towns.

And then there is nothing left but to enhance as long as you can! You will find excellent help here.

If you fulfill the requirements, you can graduate from the Season Servers and receive several special rewards to help you get ready for the normal servers. Graduation allows you to quickly convert your season character to a normal character with its equipment. This system is only available after a certain of time has passed since the start of the season. All that will probably be provided that the character does not possess a Fughar’s Timepiece item and the Season Pass is fully completed and collected. At the end of the season, the non-converted characters are automatically converted and in no case lost.

The Season Special Gift Exchange Coupon allows you to redeem with a Special Reward of your choice with Fughar. It is available from the following items (1 only) and only if you have not obtained them in previous seasons:

We prepared a table in case someone wants to get the most out of snowflakes just for profit. However, there are cases where you prefer to choose what you need. The market prices are calculated on the basis of the EU server, so this may be different on other servers.

You will need to deal with the above if you do not have anything you specifically need from the ones listed. A total of 78 snowflakes can be taken out of the Season Pass, and 118, along with the Black Spirit Pass. Unfortunately, it has to be considered how many times an item can be obtained. So the table above shows that Manos Riding Crop is the best choice in terms of profit. Of the three redeemable items, both Caphras Stone bundles are valuable, especially if we open them with great luck.