How to Play Arcade Games on Your Windows PC

In this guide, we will be talking about how to play Arcade games on your Windows PC. This includes how to install, configure, solve, and load up games using the mentioned emulator. The guide will also tackle other alternatives that may interest you.

Who hasn’t grown up with the Arcade? only a few people in the world. Or, people who haven’t heard of gaming until they reached an older age. It’s still surprising to me how the Arcade is still popular globally to this day. Collectors and die-hard fans are still discovering a plethora of games which are buried deeply in Japan.

From Shmups to Run & Gun games, from Cabal-like shooters to beat em ups, the Arcade surely had a handful of genres that nudged players to spends coins after coins until they ended up being poor. ( I know how it feels to play Metal Slug 3 and spend 10 coins to defeat the final boss, it hurts).

However, have you ever wondered how newcomers managed to learn about the existence of the aforementioned? Well, the obvious answer is emulation all the time. Emulation has not only made it accessible for people to game on hardware they did not own but also discover that it exists. At least, that’s how I was able to discover the Turbografx-16.

Once again, we are doing a tutorial to let you know how to play Arcade games on PC. The emulator we will be showcasing this time is called MAME. Please, read all about this emulator below. 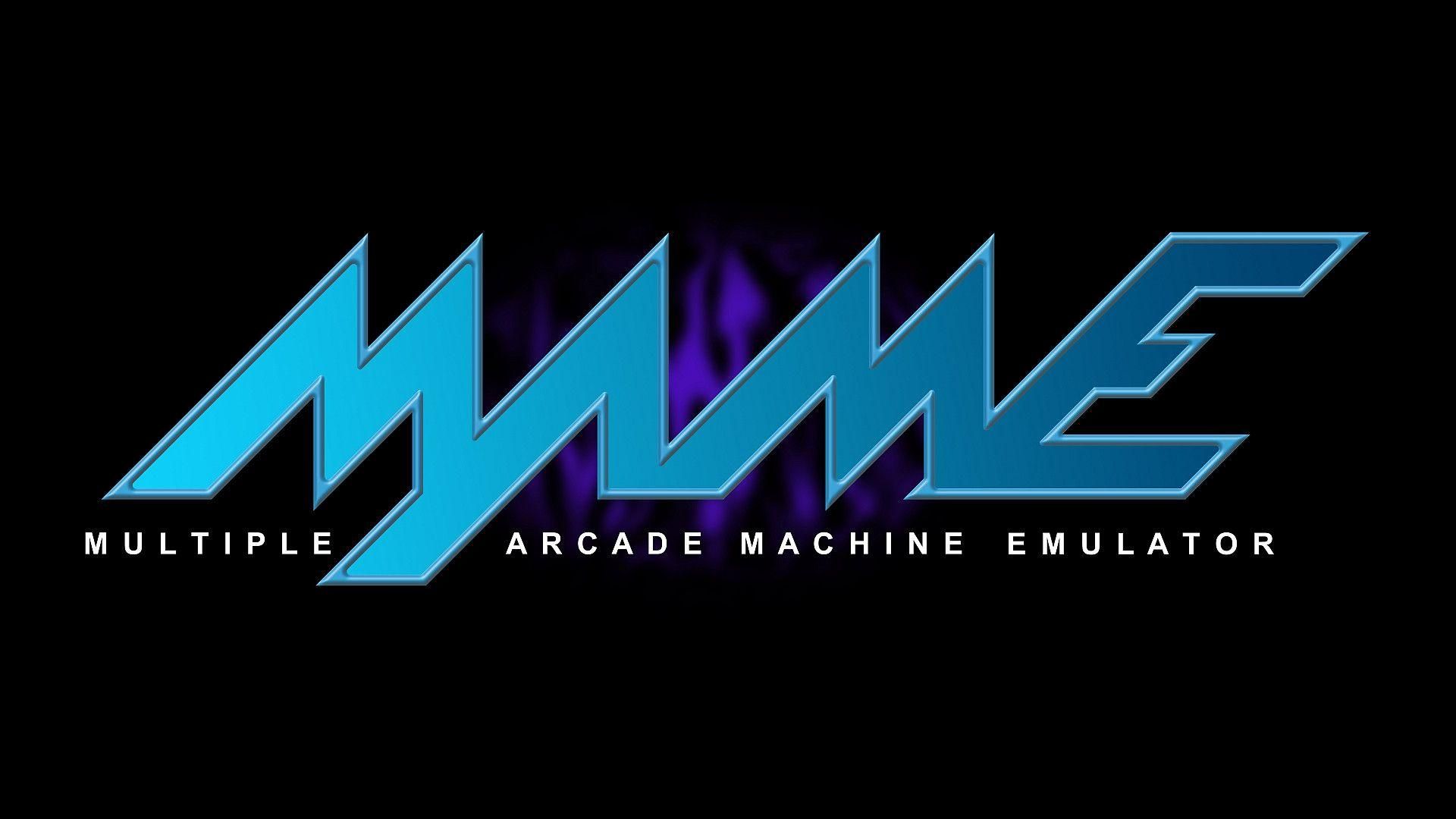 MAME is a free and open-source emulator designed to recreate the hardware of arcade game systems in software on modern personal computers and other platforms. Its primary intention is to preserve gaming history by preventing vintage games from being lost or forgotten. MAME is capable of running a myriad of hardware that will drop your pants. In case if you are interested, please, check this site right here.

Is MAME still a good choice?

Is MAME still a good emulator? yes. There are other alternatives like RetroArch which uses multiple ‘cores’ (multiple emulators) for arcade games such as FinalBurn Neo, HBMAME, MAME 2003, MAME 2003-Plus, MAME 2010, MAME 2015, and MAME 2016. However, not everyone likes a multi-emulator system after all and this should be used only as a last resort. If one had to pick up between which is better then MAME is the go. The latter is already capable of running a myriad of systems including the NES, Genesis, N64…etc.

How can I get MAME?

Getting the MAME emulator is a piece of cake. Head straight to the official website and get it from there. MAME is one of the emulators that’s always updating once in a while, so make sure to stay up to date with it so you that you won’t miss anything crucial. MAME’s purpose for each update is to make more games playable. However, sometimes updates may break playable games. Luckily, that’s not an issue. You can always downgrade to the version where your game would run from start to finish.

Before I close this section, just make sure to download the proper OS version. For example, if you have a 32bit Windows, go for 32bit, and if you have 64bit, go for the 64bit release.

How to install MAME?

Just like any emulator we have showcased before, MAME is not an exception. All Windows versions of MAME are standalone. Meaning they do not have an install wizard. The installation is very simple: just put your Zip file into your desired folder and extract Mame from its Zip file, that’s it.

Understanding how MAME ROMs to function 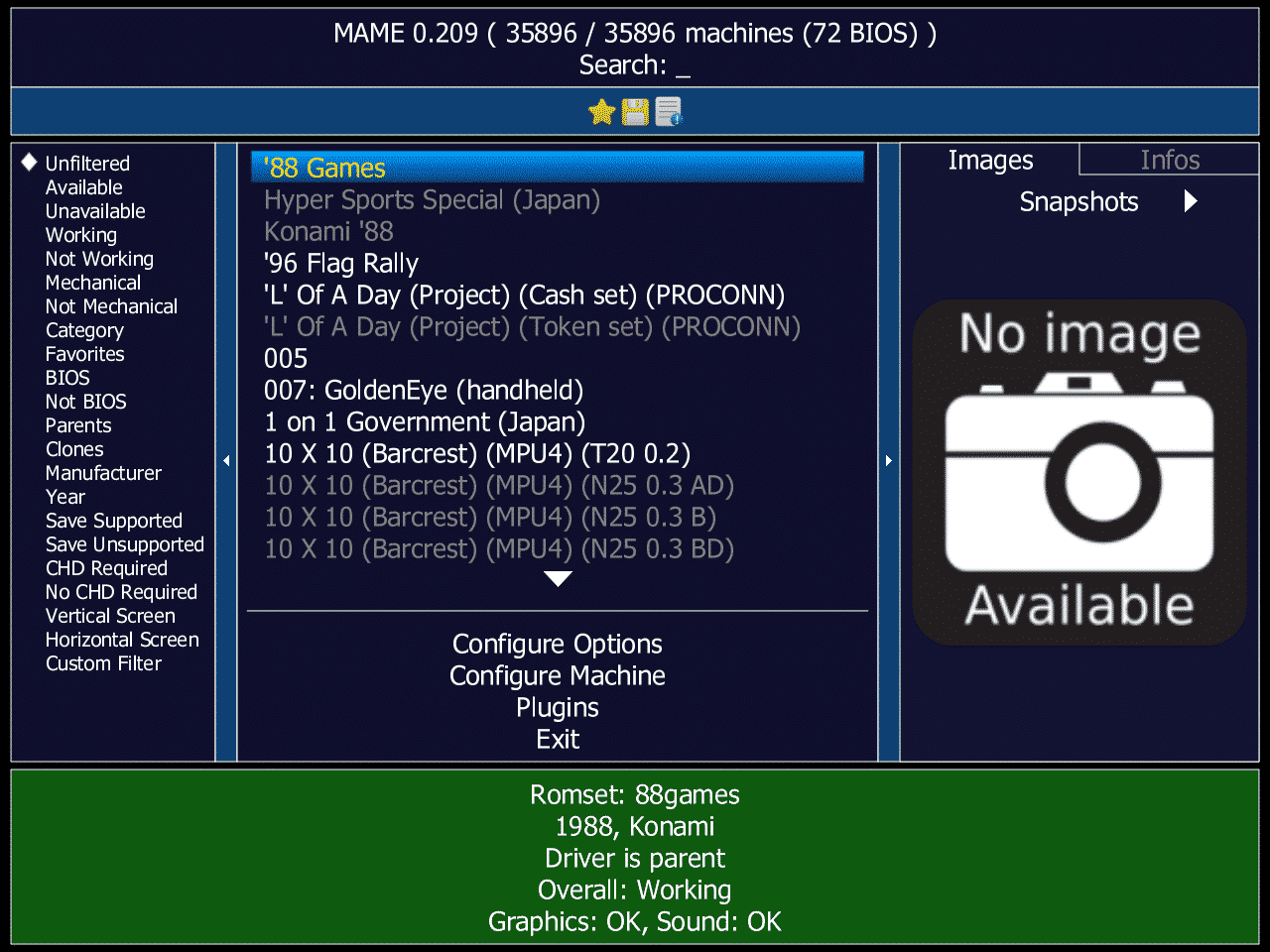 The first time you open MAME, you’ll find yourself looking at a screen like this filled with a list of games. Don’t try to run them, they won’t boot up. ( unless if you downloaded MAME from somewhere else with all the game ROMs included, then that’s something else.). Now, what should you do? Easy, go download the games. However, be warned that not all games will work. Sometimes you may be unlucky that a game may not work for you when using the recent MAME build. That is not to say MAME is to blame. Some arcade games are way too obscure and dated that they sometimes won’t work on newer builds. However, when emulating popular, underrated, or hidden gems you’ll be perfectly fine. Rolling back to old builds helps, or you can simply use MAMEUI64. Although this is a very rare issue that I stumbled across.

Where can I get the games? 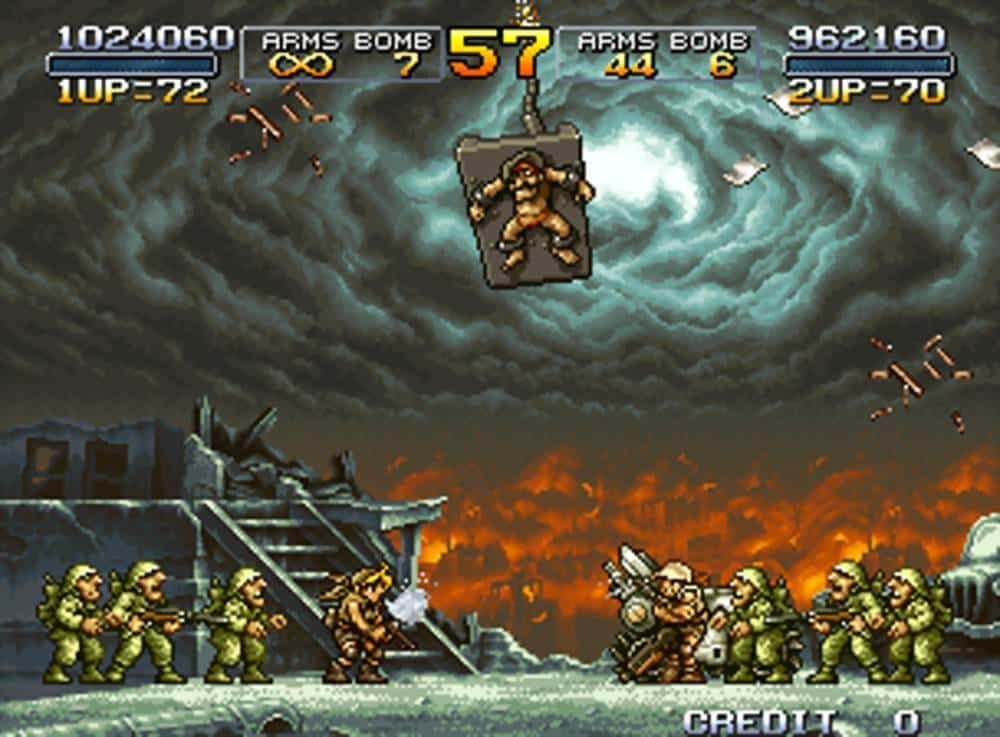 There are many places where you can get your games from, but sadly, we can’t link them here. However, I’m sure a simple Google search will drop you at the nearest place where you can get the games you desire. When downloading a MAME ROM just remember that not all the games will run for you. So, don’t panic when a game shows an error, there’s nothing wrong with your system nor the emulator. As a workaround, you can always downgrade your MAME version and see if it works, if not, then it won’t. If you’ve finally downloaded your game, look below on how to play Arcade games on PC.

How to play arcade games on PC?

In case if you’re wondering how to play arcade games on PC, it’s simple. After you have downloaded your game, you’ll see a screen like this. Navigate and search for the name of your game and double click on it. Make sure you dump your games into the ROM folder inside the emulator folder. Otherwise, your game will not show up. Anyway, If your games are not being detected or giving you ‘not found’ errors, read the next section.

Workaround for the error cited above

This is not really an error if you ask. However, sometimes MAME will detect your games, but give you ‘not found’ errors upon loading a game. These two errors have the same source.

The reason why this happens is that the creators of the emulator are determined people who insist on everything to be perfect. As soon as an arcade game has a better ROM dump, MAME is updated to support the newer dump. This renders older ROMs as rarely incompatible. In fact, this gets a little bit complicated with the reality that pretty much every ROM site distributes only old ROMs. These old ROMs are sometimes incompatible with newer builds of MAME. To solve this, please check below:

Arcade games based on a hard drive require some extra work. To run them, you have to be equipped with two things: the parent ROM, and, the CHD file (Hard Drive file). Note that the size of the parent ROM is tiny, but expect the CHD file to be around 100 MB or even more than that. See below how to run these. I’ll use X as an example, and hopefully, you understand.

How to play on the MAME using a keyboard, mouse, gamepad, or an arcade controller 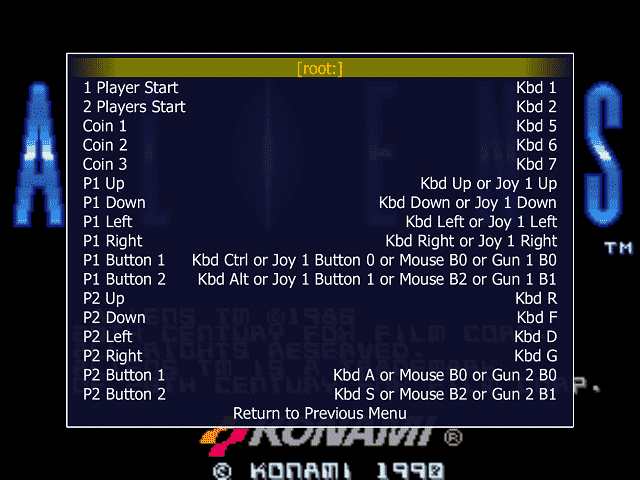 Luckily, MAME is one of those emulators that enables you to use a variety of controllers to play your games. Before I start this section, make sure your controller works with other emulators, and if it’s enabled in the MAME options. I think it’s already enabled in the newest version of MAME. Anyway, To check how to configure your controls, please look below:

I want to run a lightgun game using my mouse

MAME also has the ability to emulate a light gun using your mouse. To do that, follow this:

Configuring keyboard controls is easy, and luckily, it doesn’t require me to write about it. So, good luck out there, dear reader.

Here are some of the commonly asked questions that I gathered online:

Can I save my progress using MAME?

Well, yes, but actually no. While MAME actually has a feature to save your progress by pressing Shift+F7 at the same time, I do not recommend it as not all games will save. Others will end up being corrupted and won’t boot up afterwards.

Can I take a screenshot using MAME?

The same issue as the above, you can take screenshots, but MAME won’t save them all. Many screenshots will end up being missing. That is why I recommend using a standalone program to record your progress. Like Lightshot for example.

Will MAME run on a low-end PC

Here are the official requirements from the MAME site:

If the emulator doesn’t want to boot up (rarely happens). It could be two things: You didn’t update your DirectX driver, or you’re either using a very outdated version or a release which is incompatible with your computer. If all fails, try downloading DirectX9 and see if that works. (Especially if you’re using Windows 10).

Are there any alternatives to MAME?

There are a handful of alternatives to the MAME emulator which I personally recommend. Please, check below: 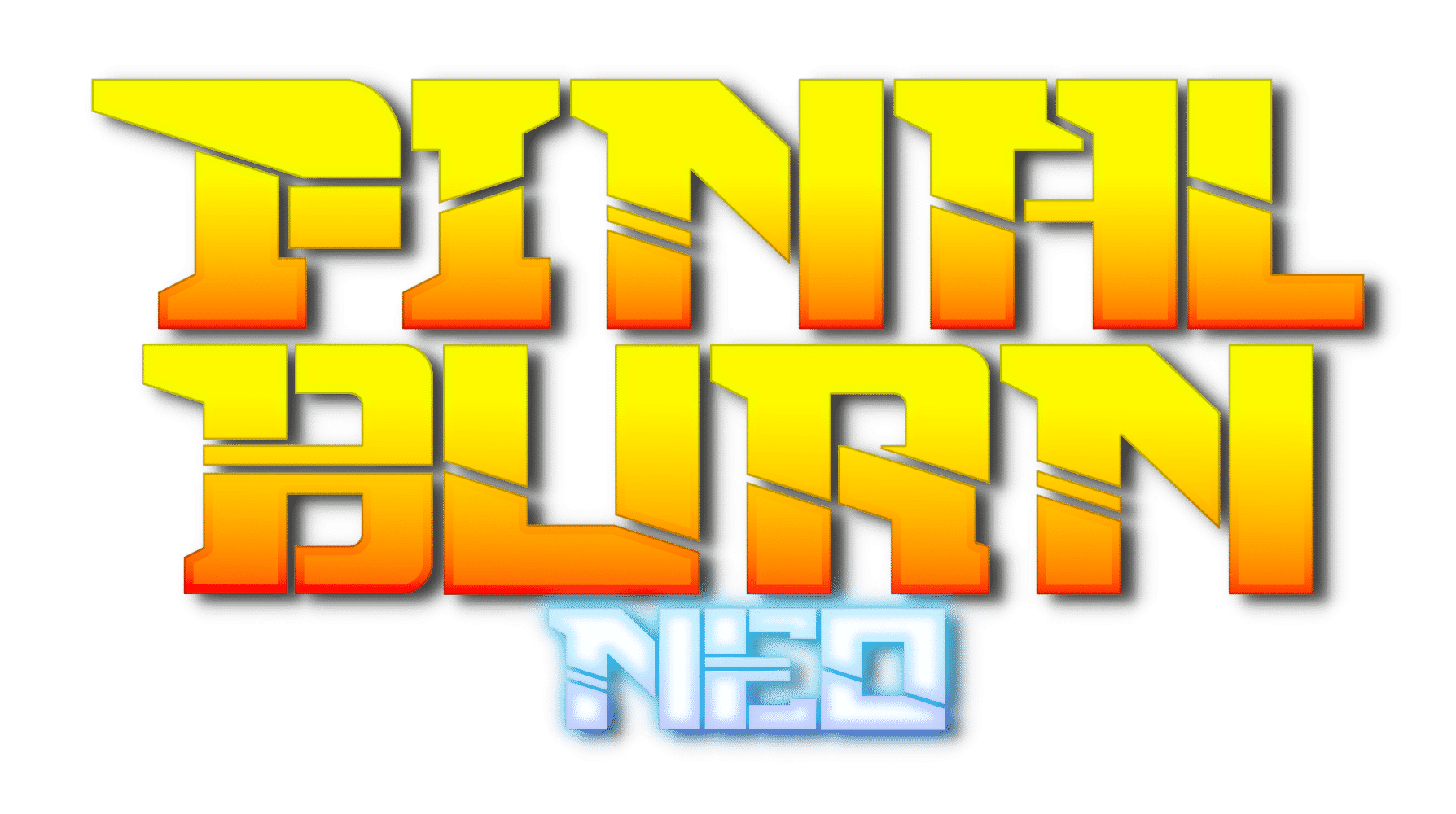 FinalBurn Neo is another alternative to MAME that I frankly use all the time. It works nicely, and the reason why I labelled it as an alternative is that the aforementioned is capable of running Neo Geo, CPS1, and CPS2 arcade games. It doesn’t require a brainer to understand how it works. It’s easy to install and facile to get the hang of it. You can download this one from the link I provided above. To download the emulator, just head to the linked GitHub website and download it from there. 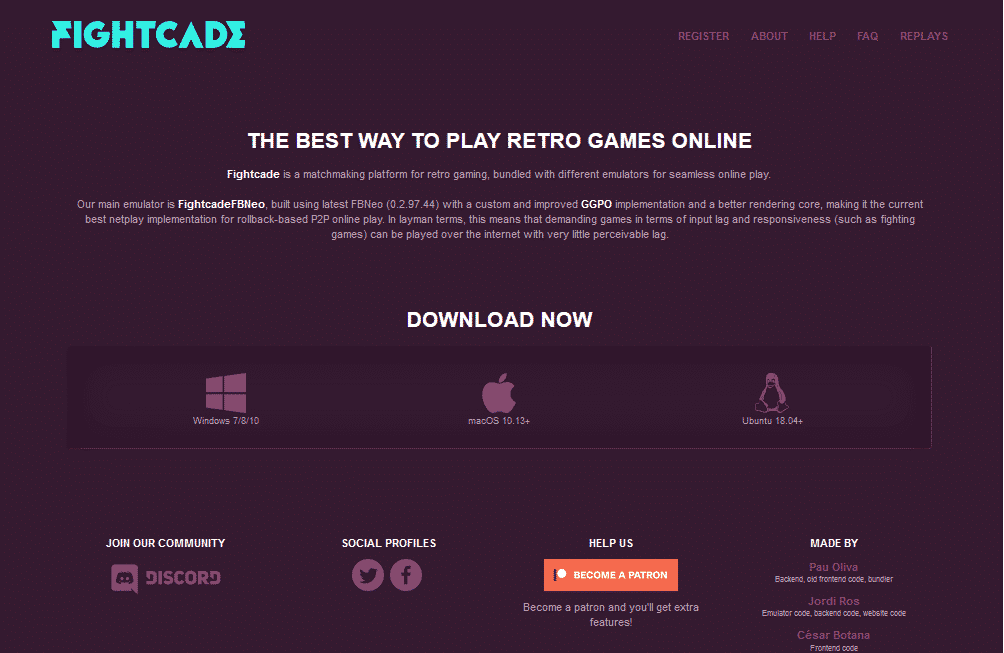 Fightcade is another great alternative in case if you’re looking to break into online arcade gaming. Similar to Winkawks, the aforementioned is capable of running arcade Capcom games such as CPS1 and CPS2, and also other fighting games from the library. The latter is also capable of running Neo Geo games. However, the reason why Fightcade is a recommended alternative is because of its netplay feature. It’s a great feature if you want to play online with somebody. And hey, it’s safe.

This marks the end of this guide. With the MAME emulator, you will have the ability to dive back into the ’90s and relive the memories. This is also an opportunity for you to know how to play Arcade games on your PC. If you’ve never tried any Arcade game, this is your chance to enter a new realm.

Thank you for reading!