How to Play SNES Games on Your Windows PC

In this guide, we will be talking about how to play SNES games on your Windows PC. This guide will also tackle other SNES emulator which may pick your interest.

After the success that was the NES, Nintendo couldn’t hold on much longer, and so they released the SNES. The aforementioned was a graphical step forward that put the NES visuals to shame. Not only that but also its games were completely different than what was done before.

Looking back, the SNES came out to our homes on fire with a myriad of goods that can be easily missed due to the massive collection of games the console had. However, no worries, we’re here to let you know that there’s an emulator for the console that can help you play SNES games on PC. The emulator I’m talking about is called Snes9x. But, there are other alternatives which I will be talking about through this guide. So, what are you waiting for? take your seat, grab your favourite drink, and read all about ” How to Play SNES Games on Your PC.” 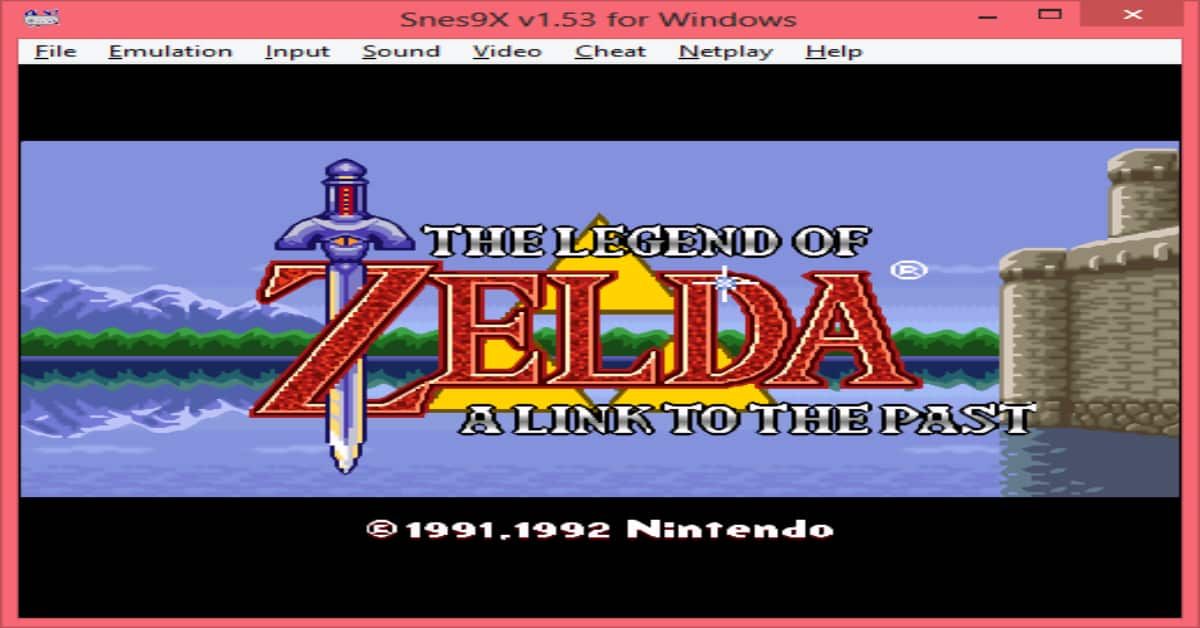 Snes9X is a SNES emulator written in C++ and it was released in 1998 for the first time. The emulator is still receiving several updates at the moment which improves the performance and accuracy of the emulator. The latter is regarded as one of the best SNES emulators out there. What it offers is capable of running on a low-end pc without any issues. In 2010, the emulator was split into two versions: Snes9X 64bit and 32bit. Both are optimized for their respectable Windows version. The latter still holds up as it’s still active and the last update was back in 2019.

Snes9X is not the only emulator out there. In fact, there are alternatives that we will discuss through this guide. Read all about it below so you won’t miss anything crucial.

Where do I get Snes9X?

You can obtain the emulator either from the official Bearoso site that contains Snes9x files, or you can find it on The Emulator Zone. There’s nothing to worry about. These sites are perfectly fine and won’t cause any harm to your personal computer.

How to Install Snes9X?

Just like the previous emulators, we showcased before such as PPSSPP, DeSmuME, Redream,  Snes9X is a standalone program that doesn’t require any install wizard. The installation is simple: just extract Snes9X from its zip file, and you are good to go.

The application was unable to start

Upon booting Snes9X for the first time, you’ll encounter an error like this:

This error rarely happens when using a 64bit version on a 64bit OS. To fix this, simply run compatibility mode, or use a 32bit version program. I know it’s weird, but sometimes stuff like this can happen to anyone. 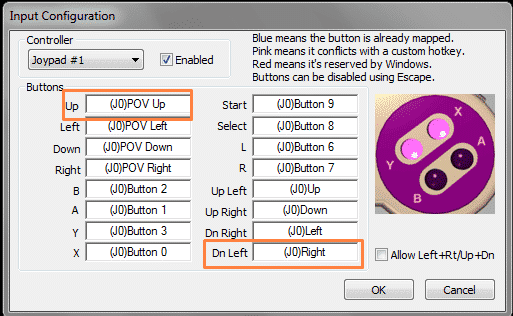 To configure your controller, simply go to Input> Joypad Configuration. A window like the one above you should appear with all the buttons you want to re-map. To change a button to another keyboard or controller button, just click in the field you want to change. Then press the keyboard button or the gamepad button. Another alternative is to automatically configure your controls. Let’s say you just plugged in your new controller, and you aren’t feeling like pressing all the field to change the keyboard buttons to the gamepad buttons. No worries, you can actually do it automatically. All you have to do is press the first field button which is ” Up ” in this case, and the emulator should start switching automatically from field to another until you’re done. By the way, don’t bother with the last field in the bottom right, they’re useless.

Where can I get the games? 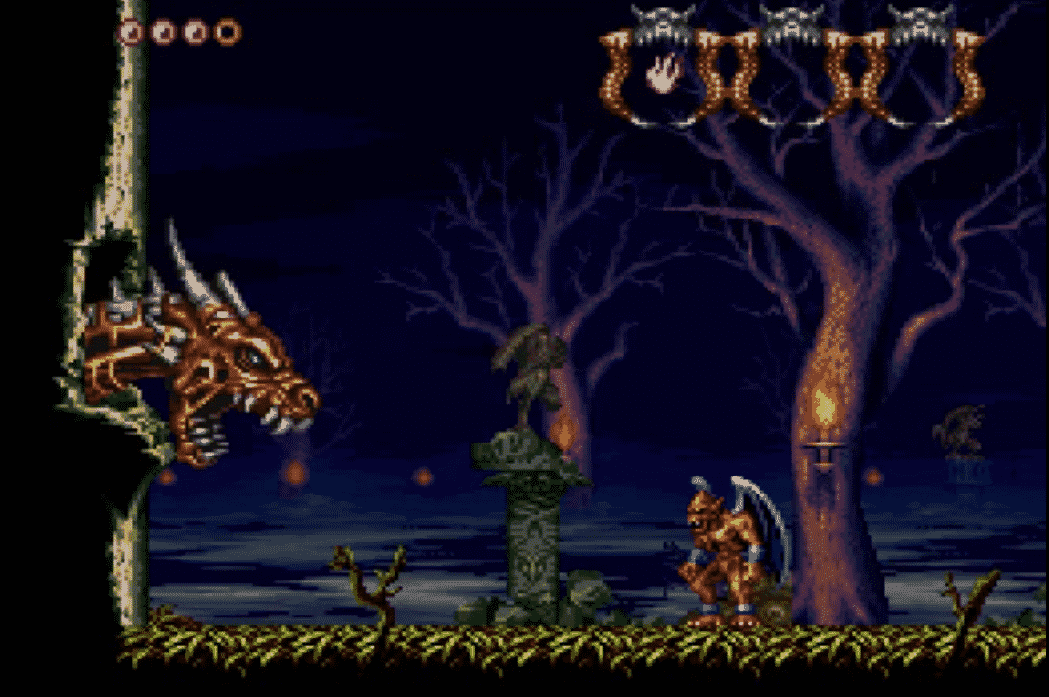 SNES has a plethora of games that you mustn’t miss as long as you live. Anyway, to get ROMs or ISOs for your emulator, simply google it and it should certainly send you to a myriad of sites that provide clean, trustworthy, and safe ROMs that will surely work for you. Don’t worry, they’re all malware-free. On the other hand, If the game you downloaded doesn’t boot up, simply extract the Zip file and grab the game from it. Below, I will discuss how to play SNES games on the PC.

How to Play SNES Games on PC? 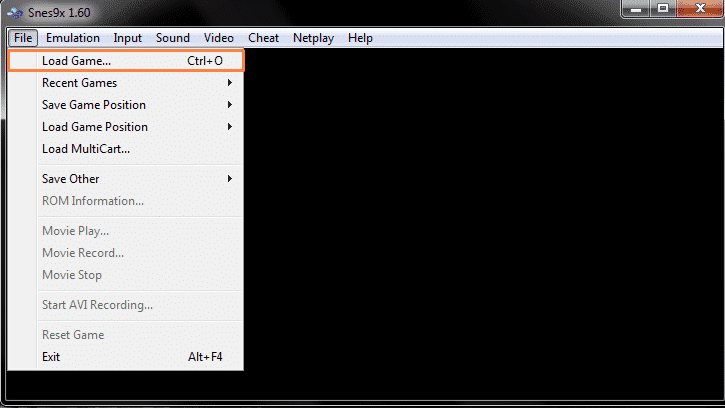 So after you downloaded your game, it’s time to boot it up. To do that, Click on File > Load Game; or press simply Ctrl+O. The emulator should send you straight to where you downloaded your games, if not, just navigate to where you dumped it into. However, I do recommend placing the Roms inside the folder with the same name on your Snes9X emulator. After you click on the Rom, the game should boot up instantly.

How to fix several issues when using Snes9X?

Unable to initialize XAudio2. You will not be able to hear any sound effects or music while playing.

It is usually caused by not having a recent DirectX release installed.

To fix this, you need to install the full DirectX package from the internet. Make you download anything DirectX-related.

Another issue that occurs when opening Snes9X is like the one below:

The program can’t start because ddx9_38.dll is missing from your computer. Try reinstalling the program to fix the problem.

Like I said above, you need DirectX to be installed on your PC. If all fails, try updating your GPU drivers and see if it solves your problem.

Upon booting the emulator, you’ll get an error like this:

This problem also requires the same steps as above to fix it, but there are other things to do. First, download the latest version of the emulator. Secondly, update your GPU drivers. Thirdly, make sure you download a SNES ROM game. Snes games are in ” SMC ” and ” FG ” format.

If all of this doesn’t help, then your GPU doesn’t support OpenGL. In that case, go to Video> Display Configuration. In-display configuration, click on the drop-down for “Output Method” and select DirectDraw or Direct3D. Click OK when you’re done.

Game freezes at a certain spot

If your game keeps freezing at a specific spot, then congrats, you have witnessed the infamous bug. Despite being rare, there’s no fix for this. I know it’s frustrating, but restarting the emulator will solve it. However, keep an out on saving every time you have the chance to do so.

How to enhance the visuals? 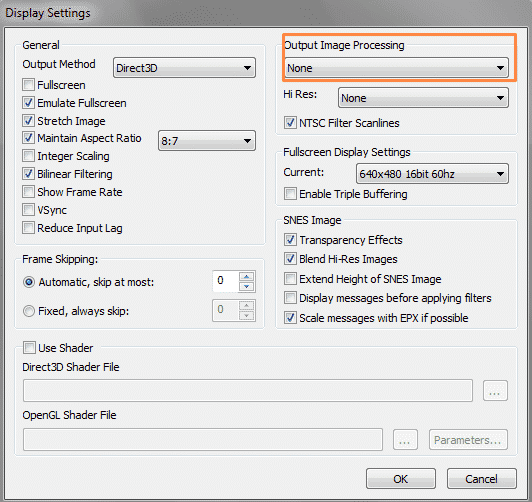 Just like every emulator, Snes9X enables you to enhances graphics and make them look better than the actual console. The feature I’m pointing out at is also known as screen readers or screen filters. You can access this feature by clicking on Video > Display Configuration. Look for the box titled “Output Image Processing”, as shown above.

Click on the drop-down (where you see None) and choose a filter you want. Unfortunately,  Snes9X doesn’t have an immediate preview, so to see how it looks you need to click OK to close this window. Repeat the process to select a different filter every time.

Note about Hi-Res: In the same box, you’ll see a “Hi-Res” option. Thanks to this feature, a couple of SNES games can render its font higher than 16-bit! Games such as Seiken Densetsu 3, Romancing SaGa 3, and Treasure of the Rudras. Enabling Hi-Res applies a filter for these special fonts to make them look nice and sharp. Otherwise, these fonts look pixel-ish. In case if you don’t know what these filters do, check below:

These will help you play SNES games on PC at the best visuals possible. And hey, it’s easy as you can see.

How to save my progress using Snes9X? 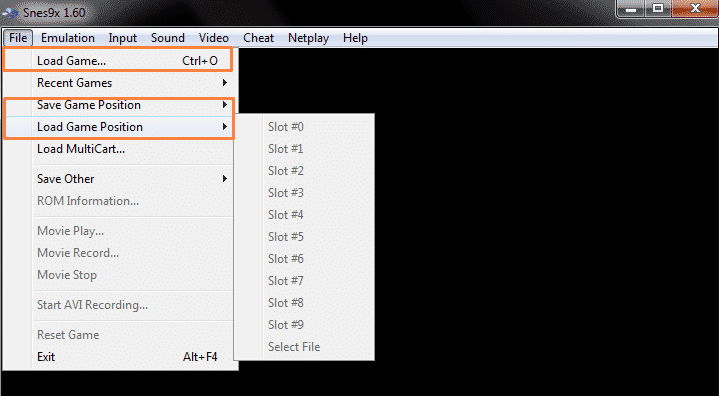 Just like any emulator, you can save your progress anytime and anywhere you want with saves states. You can use this feature manually by going into the File menu as shown above or by quick keyboard shortcuts by pressing Shift+F1.

To load your progress simply go to Load Game Position and pick the slot you saved to, or press F1. I highly recommend saving in-game to avoid getting errors or anything soon.

We have talked about this issue before so many times. The only way to fix it is to put the emulator into a folder other than the C/drive.

How to use cheats using Snes9X 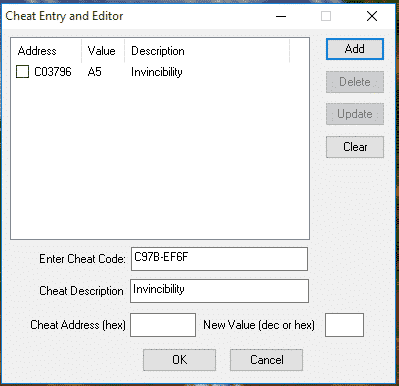 One does not simply, play in an emulator without cheats. Luckily, I’m not the only one who’ll be stuck in that dreadful Super Ghosts ‘n Goblins level, am I? Anyway, here’s how it’s done:

1-Load your game, Click on Cheat > Game Genie, Pro-Action Replay Codes.
2-In the “Enter Cheat Code” field type the code. Make sure that the code doesn’t have any space. Otherwise, it won’t work.
3-In the “Cheat Description” field type a short description for the code.
4-Click on the Add button to add the code. You’ll see a box next to it – put a check in that box to activate the code.
5-Repeat the process to enter more codes. Know that Snes9X does support cheats with multiple lines. You need to enter such codes one line at a time, and in order. Click OK when you’re done.
6-Reset or reload the game. If the cheat doesn’t work then you either typed it wrong or it’s a bad code.

By the way, if you want to know where to get your codes from, just go to GameGenie. It has everything you need. Or, you could use Etherealgames. With these cheats, you can play SNES games on PC without worrying about being stuck in a game for ages.

Here are some useful tips that would be of help to you:

While in-game, press F12 to capture a screenshot. That’s it! Or, you could also do it via the menu by going to File > Save Other > Save Screenshot.

If you suddenly had the urge to record your own self playing on the emulator, simply go to  File > Record AVI. Once you do that, Snes9X will prompt you with the ”save as window ”. Enter the name you would like for your movie clip, and click Save. After that, the emulator will prompt you with the video compression window. Leave it as ” Full Frames” and click OK. If you want to stop recording, go to File> stop recording AVI.

By the way, this method is not really necessary since you could use a third-party program like Camtasia or Action! to record your gameplay.

To go full screen using the emulator, simply press Alt+enter. To exit the mode, do the process again. 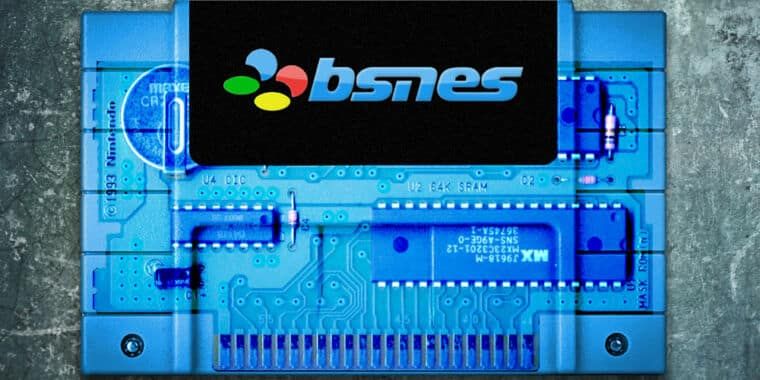 Here’s an alternative to Snes9X. The emulator was originally developed by Byuu. After his retirement in 2020, the community took the lead in improving the emulator with each update. Here some unique features for this emulator:

BSNES, with its features, makes it the best alternative to Snes9X for those who are seeking the best accuracy. If you want to play SNES games on PC, you can give this emulator a shot.

Bsnes-HD is the fourth fork of the original Bsnes emulator released back in 2019. One of the features the emulator had were:

While this fork introduces some cool features, it is unfortunately no longer active.

This emulator was once seen as the best emulator to set foot on the emulation scene. However, years have passed, and other better emulators appeared. The emulator is basically forgotten now. ZNES can be downloaded from the official site, and it runs on Windows, DOS, and Linux as well. However, it’s not recommended as many games don’t work, but for the sake of discovery, I wanted to include it here.

The SNES is a really good console, and I recommend it to anyone who is in love with pixel-art games. It’s guaranteed that you will not get bored with the myriad of games the latter provides.