Mirage Memorial Global is a new Waifu Collector from eFun, where the wheel is not reinvented, but the waifus could make it worth your time - or not.

Mirage Memorial Global is a fresh gacha game from eFun (who also brought us Tales of Erin & Armored God among others). It has launched globally in October 17, 2019 on both iOS and Android devices.

MMG is strictly a waifu collector, which means that all the heroes you can collect are female, and pretty! All the mechanics feel familiar to other gacha games, yet without giving you the feeling of another copycat. It’s a quite well-made party RPG, so let’s dive in to more details! 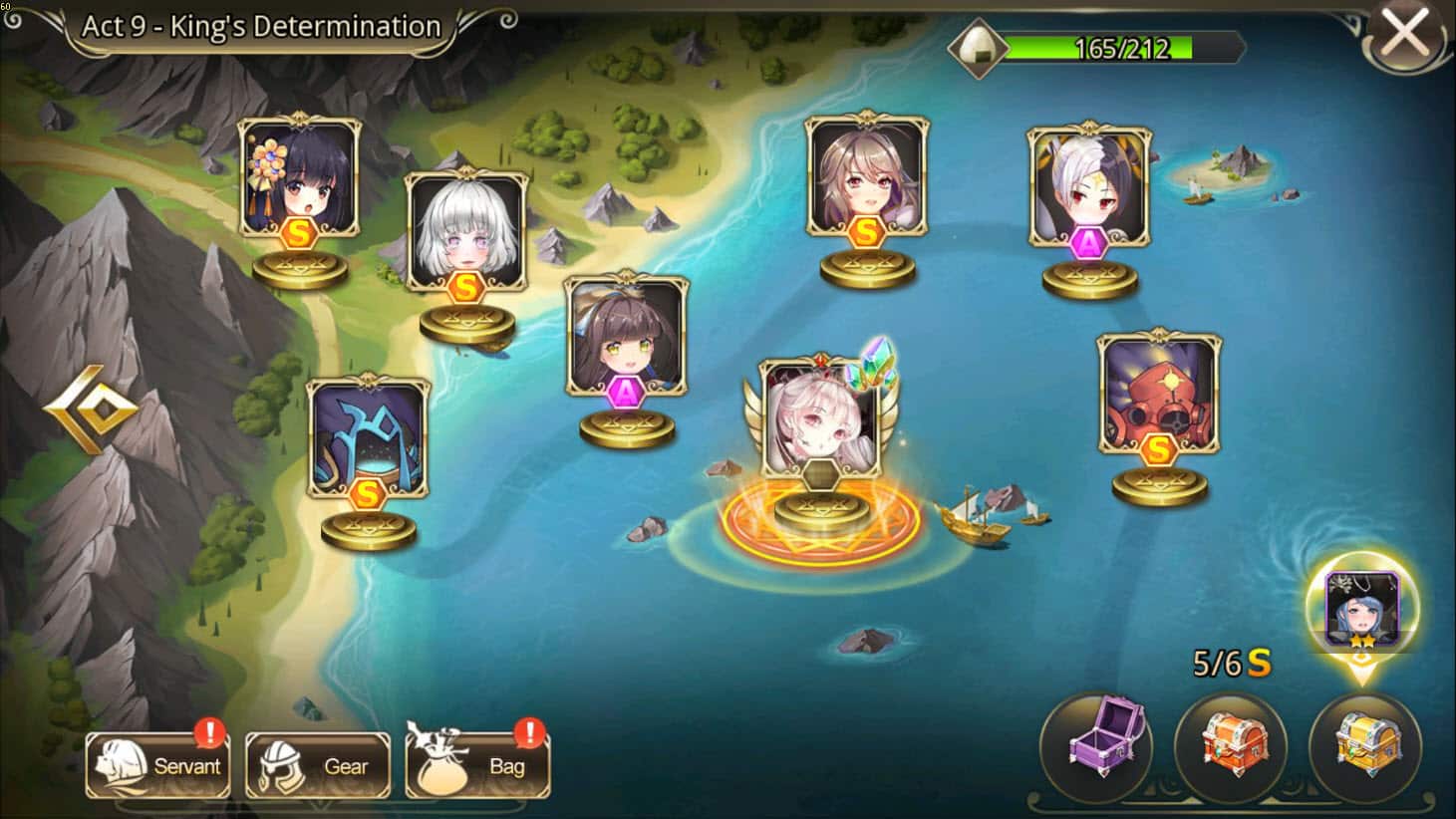 The first thing you’re going to love with Mirage Memorial Global, is its ease of use, whether you’re moving between the game modes, or upgrading your waifus!

Zero lag, along with well-organized menus, will make managing your servants a breeze, and rush through content, as fast as your Power allows.

Of course, there’s not too much content still, and already some menus feel clattered and chaotic. I hope that the interface will get even better while more game modes come out. 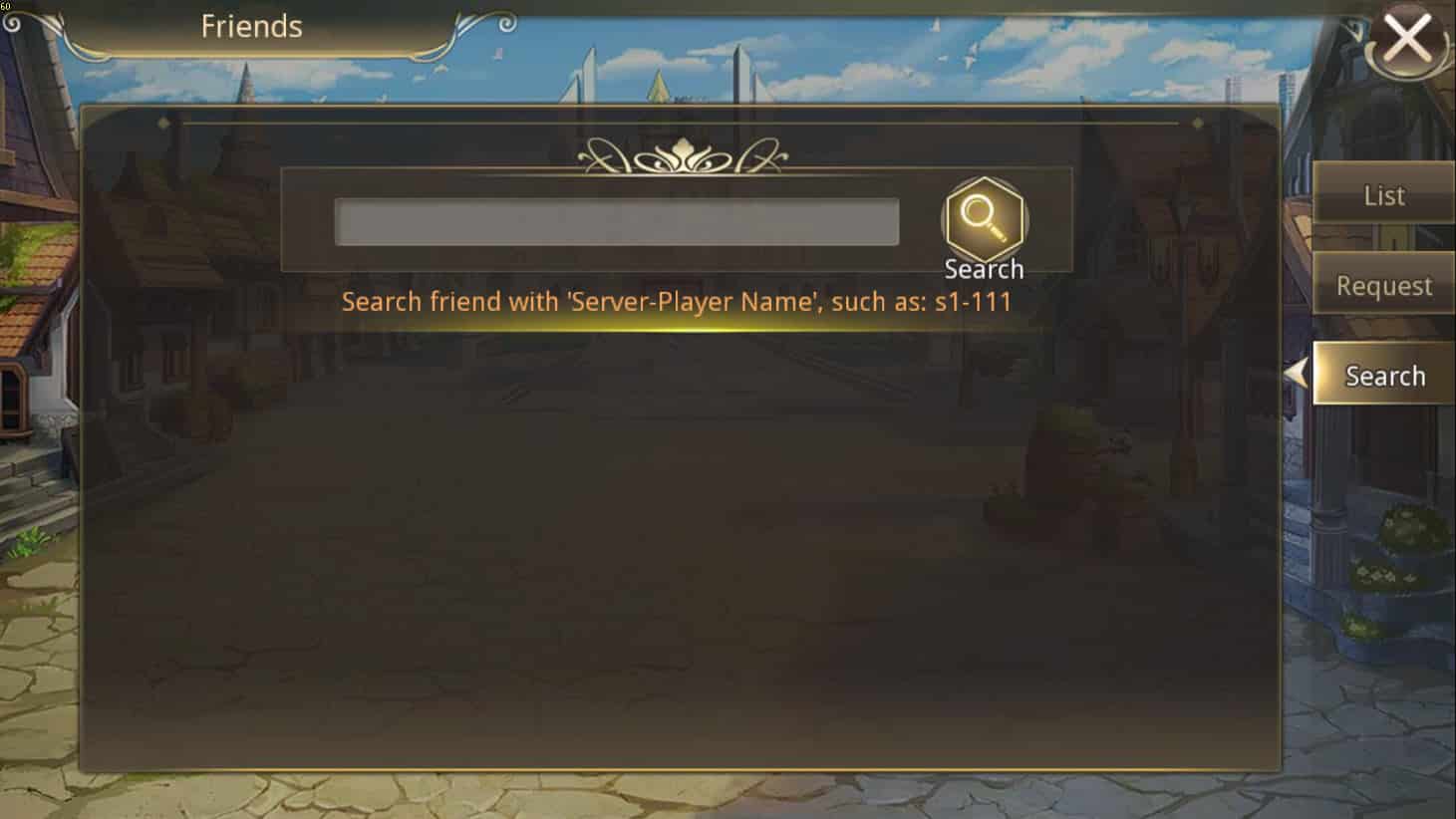 Your eyes won’t be bleeding all day from grammar & spelling mistakes, but it really makes you wonder:

Even if 10 people buy a few premium packages once, there is enough money to cover for a quality English localization. I mean ok, the story part requires more than that, but just the interface and main functions would be a start!

With mechanics like “Inlay” and “Star-up”, you are going to cringe quite a few times playing Mirage Memorial, and wish you’d stick with one of the more polished gacha games out there. 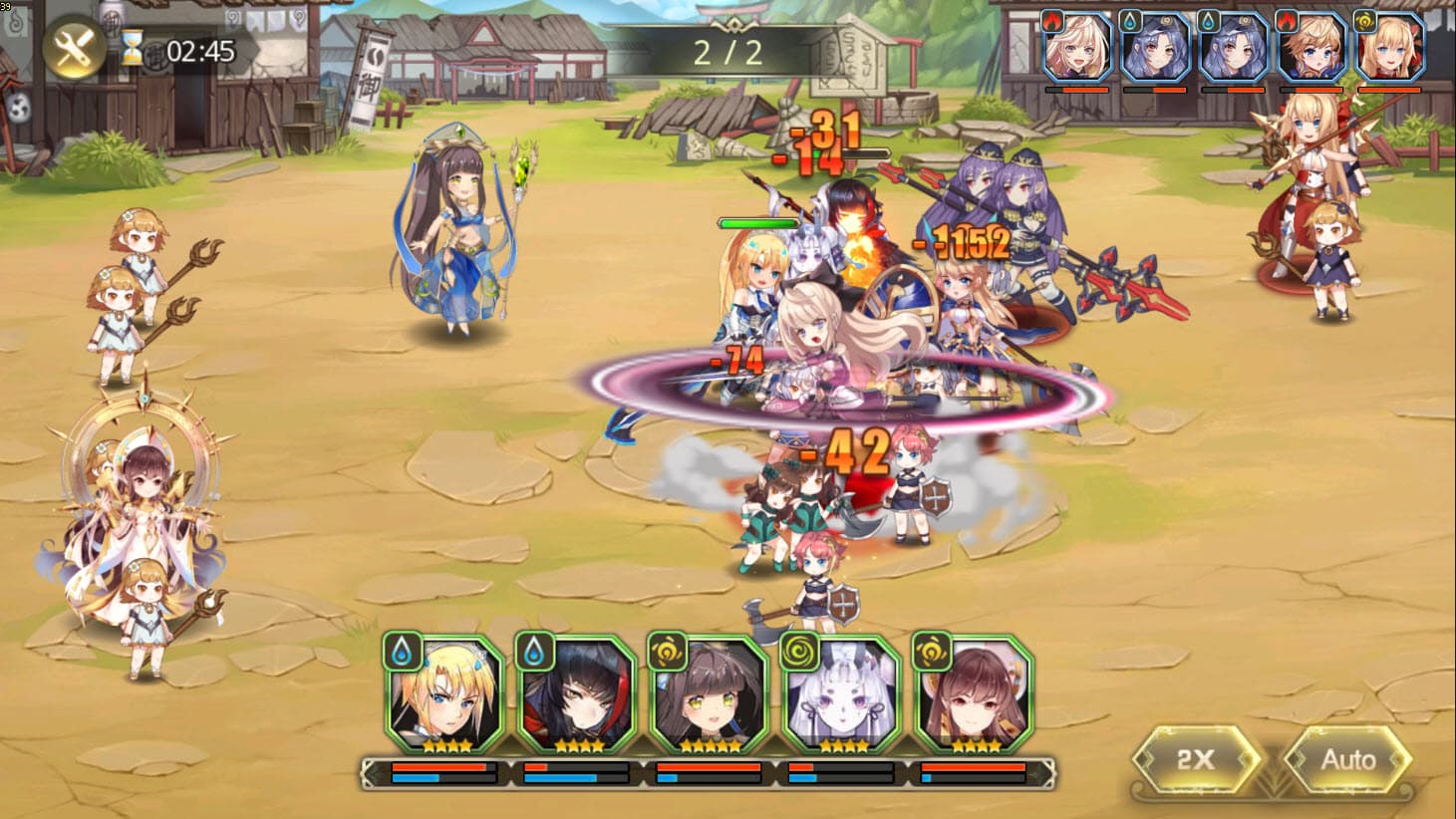 Let’s be honest, for most gacha games – and especially waifu collectors – combat is just something you want to look pretty.

MMG partly achieves this – unless you are a Chibi hater – but there is really nothing you can do while fighting, only time your waifus’ ultimate abilities.

What’s good though, is that there is a nice formation system called “Lineup”, where you can actually choose from a wealth of options, and choose exactly how you want to place your 5 waifus – front line, middle line or back line.

Along with the element system (fire beats wood, wood beats water, water beats fire, light & dark beat nothing), it makes for some cool strategy choices while tackling the harder content, but there’s really not much to the combat itself. This is primarily a waifu collector, and not a tactical RPG. 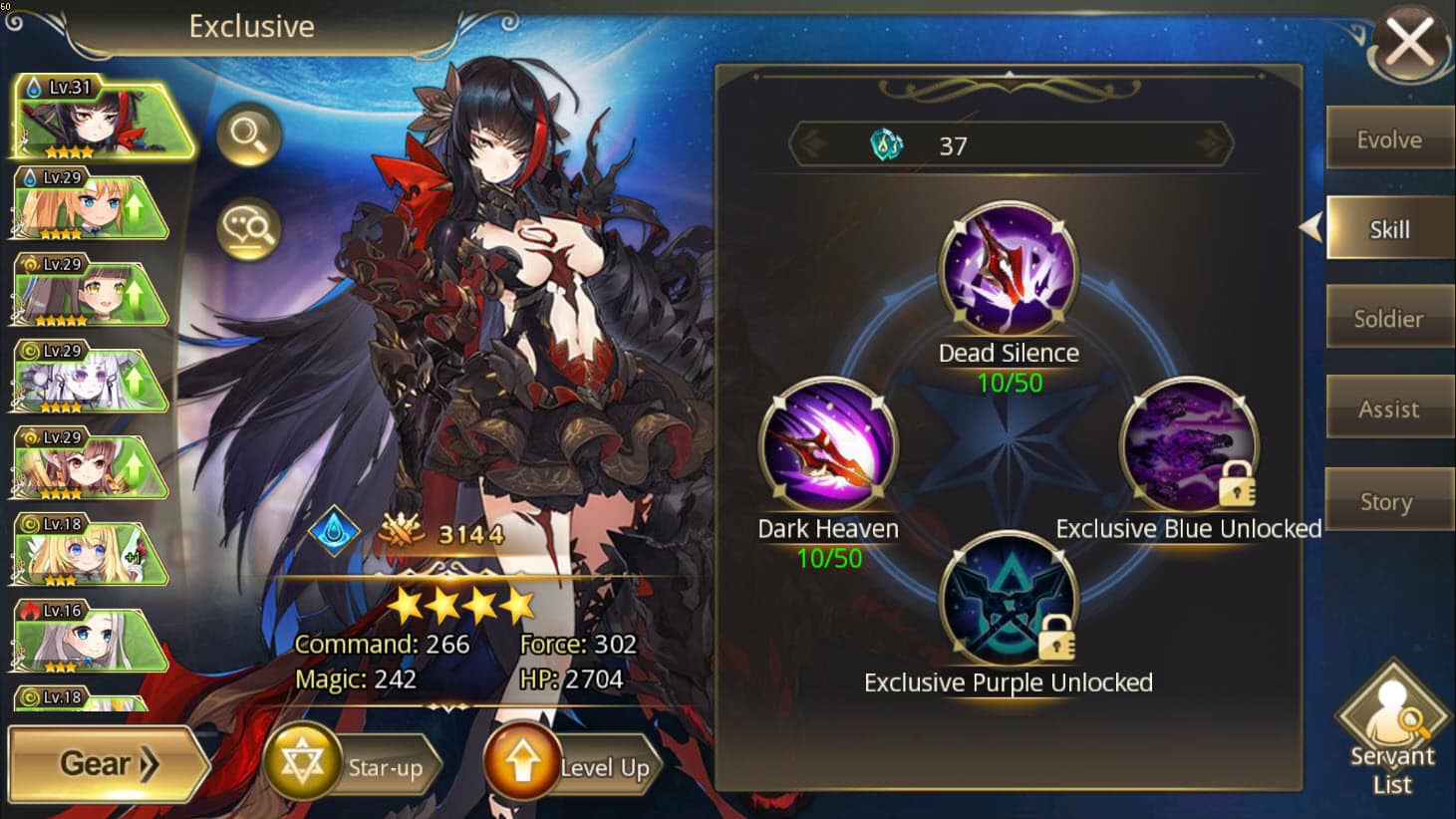 There’s too many ways to level up your servant stats, and none of them feel locked by money or too much RNG.

Sure, you won’t be getting endless resources on a daily basis, you will face more and more “power walls” the further you progress. But there’s many ways to upgrade your waifus, their soldiers, and their gear, that there’s always something to go for.

There’s also a lot going on with gear, where you can customize the special attributes and stats it provides you with, achieving a stronger combo for PvP or PvE, while doing quick swaps and upgrades.

Good Balance of P2W and Free Resources (so far) 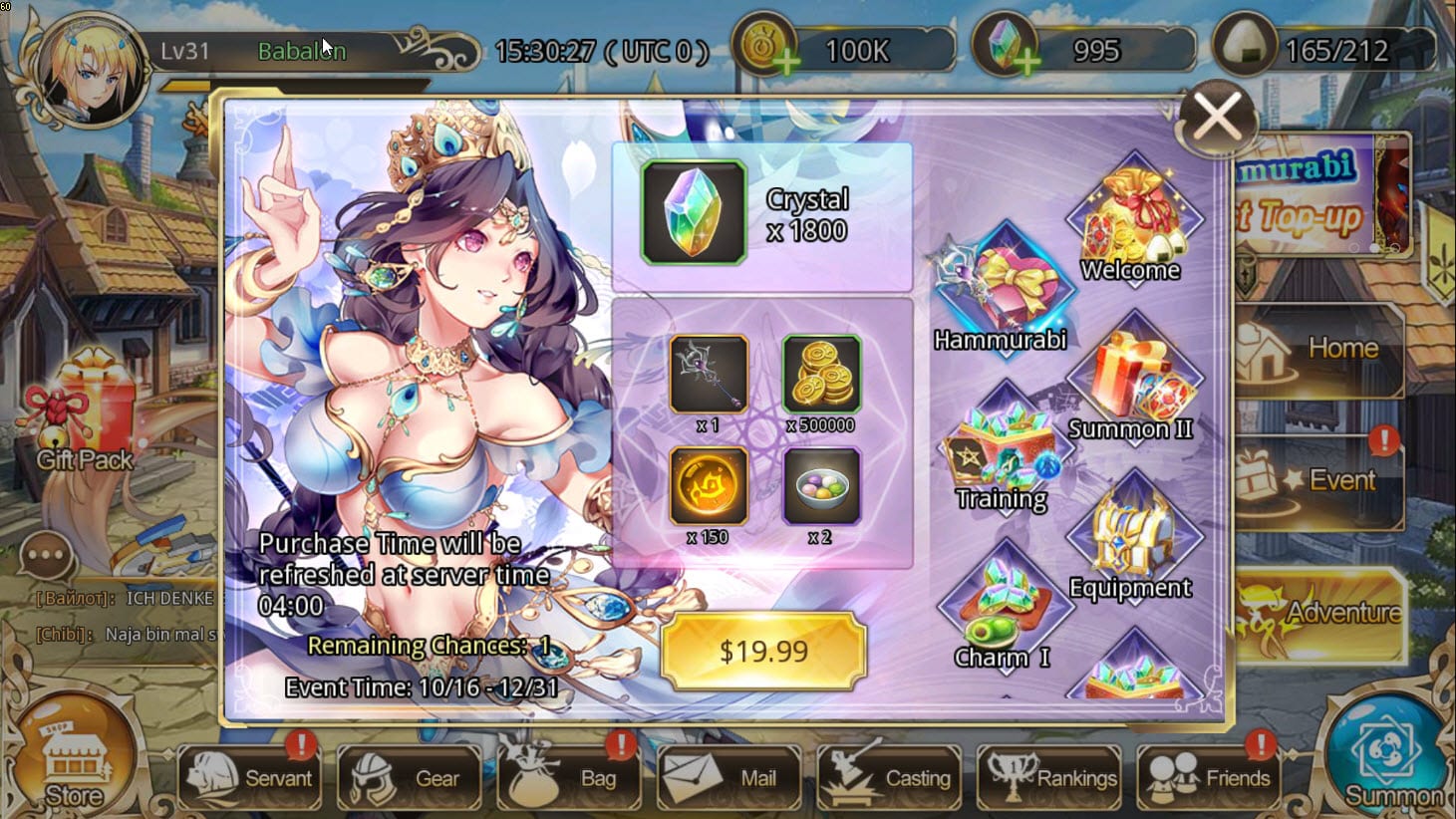 I mean sure, you have your wealth of gift packs to be lost in, and daily topup schemes, but all in all the game is quite generous with resources, and pain-free grinding in the form of free Raid tickets, that you won’t be having many reasons to spend money on it.

There’s even a VIP system in the form of bonding with your Servants, and passively gaining more “VIP benefits”.

Progression will get slower and slower, as with all gacha games, but there’s many ways to advance your team and a wealth of things to day every day.