ruckus, a particularly wily and inventive goblin, was toiling in the gold mines and discovered a long-lost mind-stone of a fallen war golem. He installed the relic into his mechanical digging suit, hoping it would provide the suit with enough power to outperform the other miners.

The ancient sentience reawakened and brought the suit to life, and it was named Bolt. Both of them agreed to a tentative partnership, one that freed them to scour the Realm in search of fame, fortune and upgrades! Ruckus was released on November 17, 2015, when the game was first released in Closed Beta.

Ruckus is now one of the most offensive tanks in the game, able to push enemies out of point and help his fellow defensive tank capture the point without disturbance. 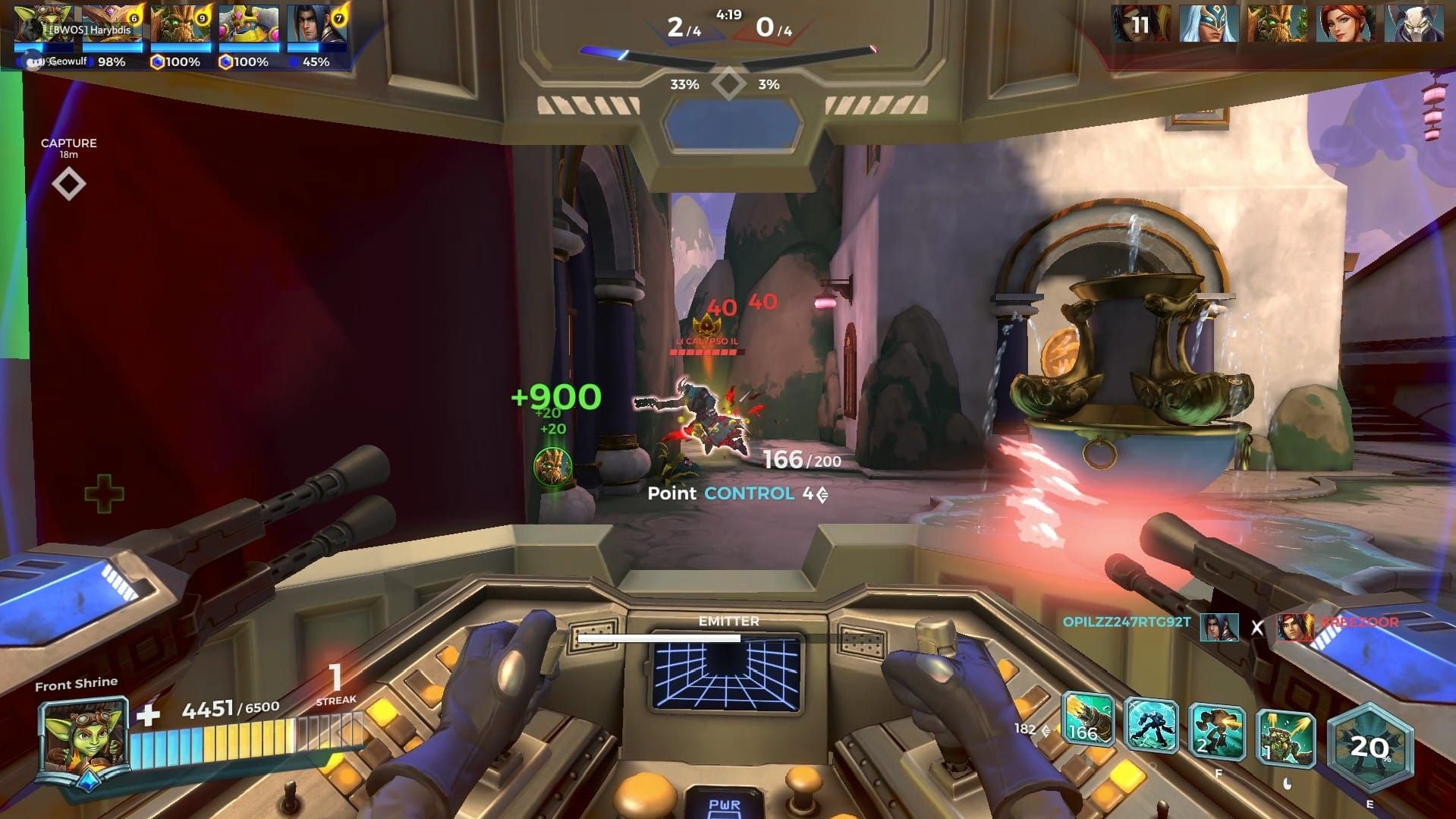 Ruckus’ weapon is a pair of fast firing miniguns that deal 40 damage per shot every .04 s once fully spun up. As a direct damage ability it is countered by “Haven” item. Maintain fire to continually speed up the rate of fire. Minguns are effective at medium range, and its a common mistake seeing Ruckus players sniping from afar.

As previously said, Ruckus is mostly offensive than defensive tank, so he is more effective when he is attacking enemies from backlines, when they are all focused on the defensive tank of his team. Always beware of your Support’s positioning and be prepared to defend him at all times. 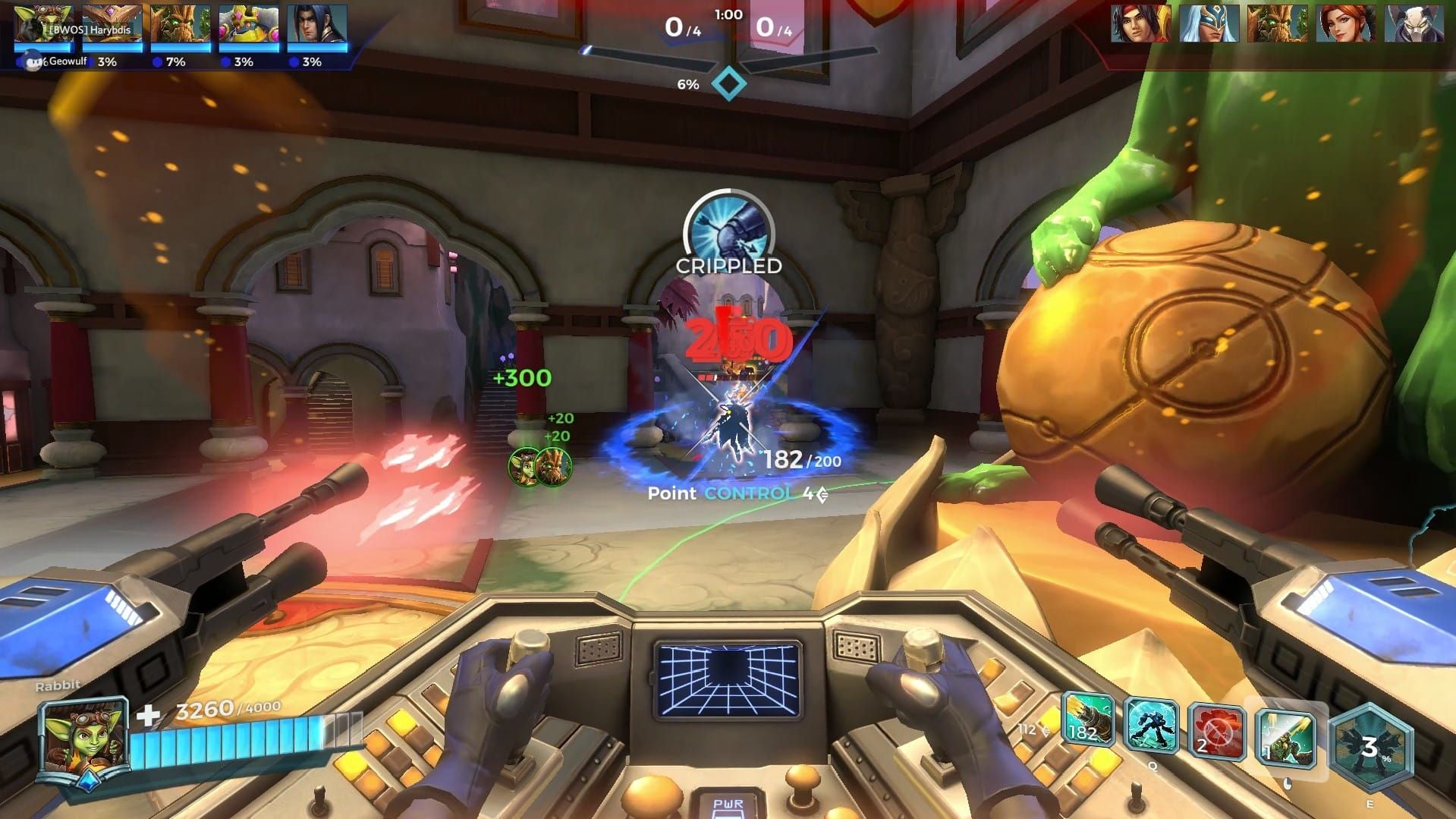 Ruckus can also fire two missiles that deal 250 damage each in a large area, out of his minigun suit. It is highly effective on a grouped enemy team and it can be countered by “Blast Shields” item.

When using “Rocket Barrage” or “Aerial Assault” talents, focus on leveling the “Crystal Capacitor” card, which can get your cooldown down to 7.3s to 4.5s, depending on the level of offensiveness you want to reach against enemies. Missile Launcher’s lowest possible cooldown is your highest possibility to win when you are using these talents 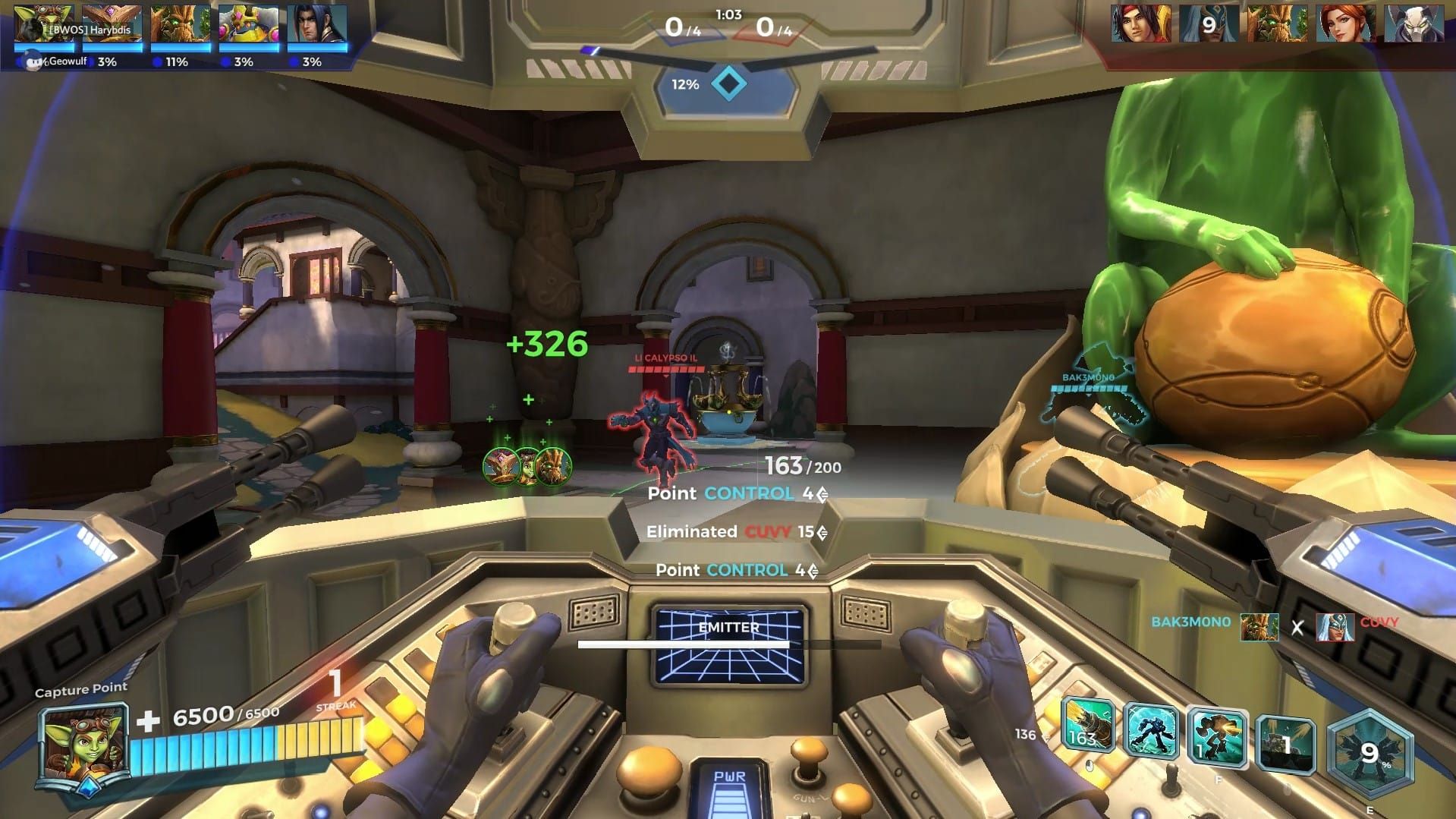 Ruckus can protect himself by creating an energy shield around him for 3.5s, that absorbs 2500 damage. It’s cooldown is on 12s and this is the reason why you can’t be highly effective as a solo tank.

There are some ways though to buff your protection. By using a combination of the “Flux Generator” and the “Emitter” cards on your loadout, you can, pretty much, double-up your defenses, as you can reduce “Emitter’s” cooldown, and even heal yourself while you are covered by it. 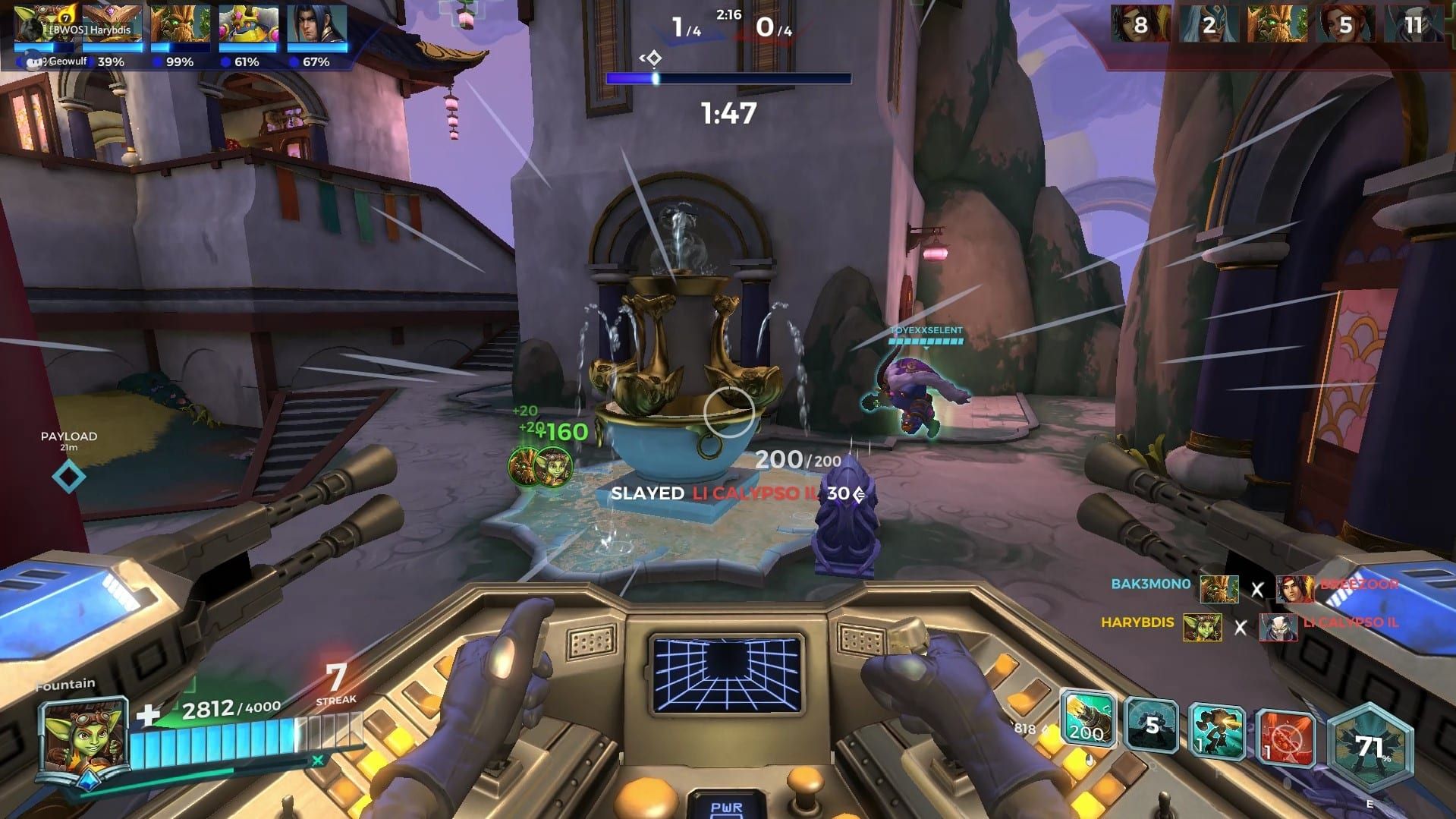 “Advance” is an excellent “escape/confusing enemy” ability, with which you can quickly jet in the direction you are moving. You can fire while using “Advance” and confuse enemy by dashing back and forth.

Try to avoid deployables, confuse snipers and avoid ultimate abilities by flying over them when you are using “Aerial Assault” talent. Use it as well to hide behind corners fast, while getting a bit of heal, by using “Air Cooled” card on your loadout. 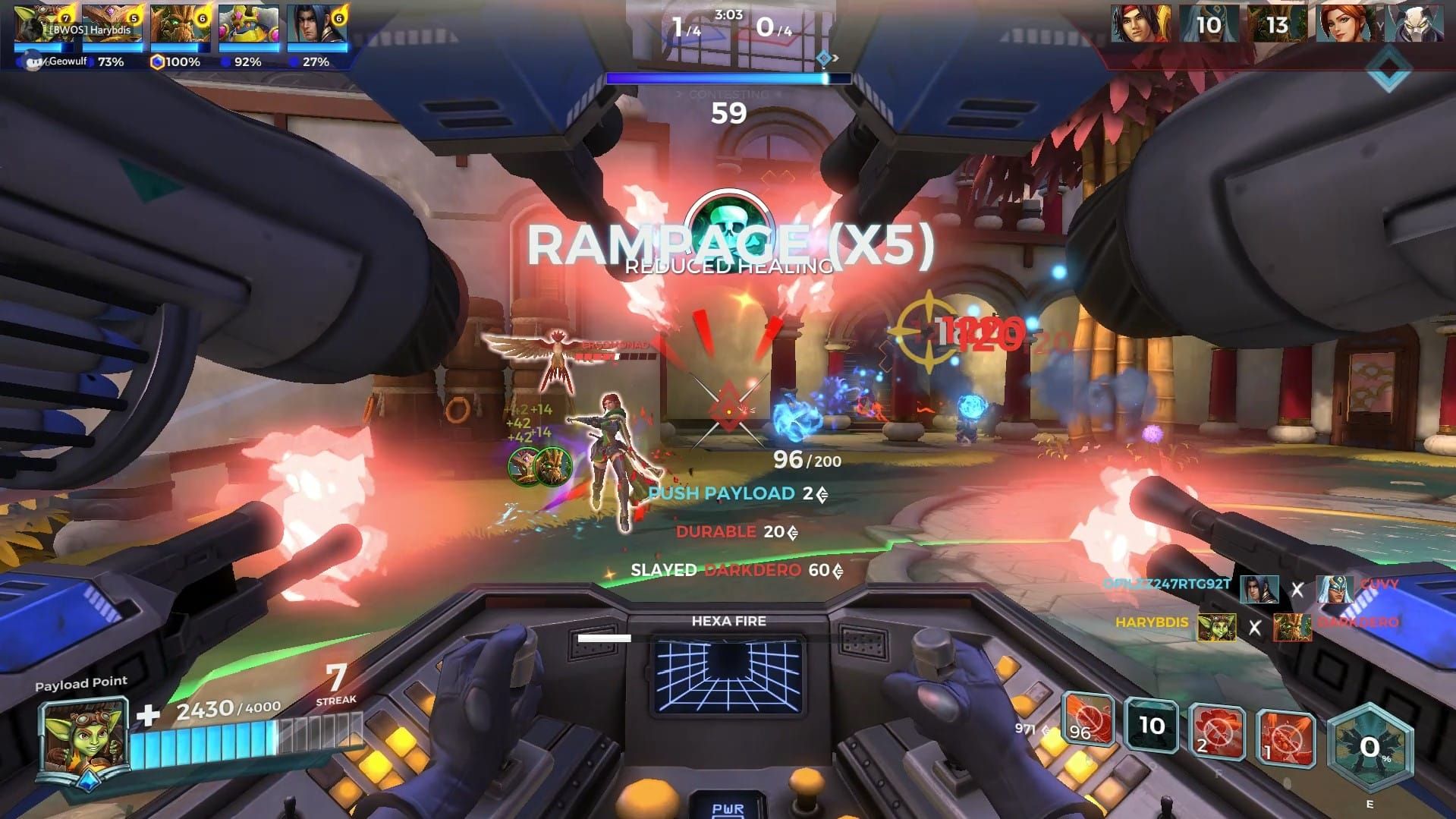 “Hexa Fire” is one of the tricky abilities to get used to. You basically equip two additional miniguns, that deal 120 damage every .04s and two rocket launchers that deal 250 damage every .25 s. The tricky part is that your movement speed is reduced during “Hexa Fire“, but you gain 10% damage reduction.

Always make sure that you activated “Emitter” before you use the ultimate ability, and position close to your support. Better surprise them when cornered, and don’t use it from a big distance, as you give them the chance to run and hide, before you even get to damage them. Also better combined with other ultimates that cause CC to enemies (ex. Ash, Seris, Inara, etc.). 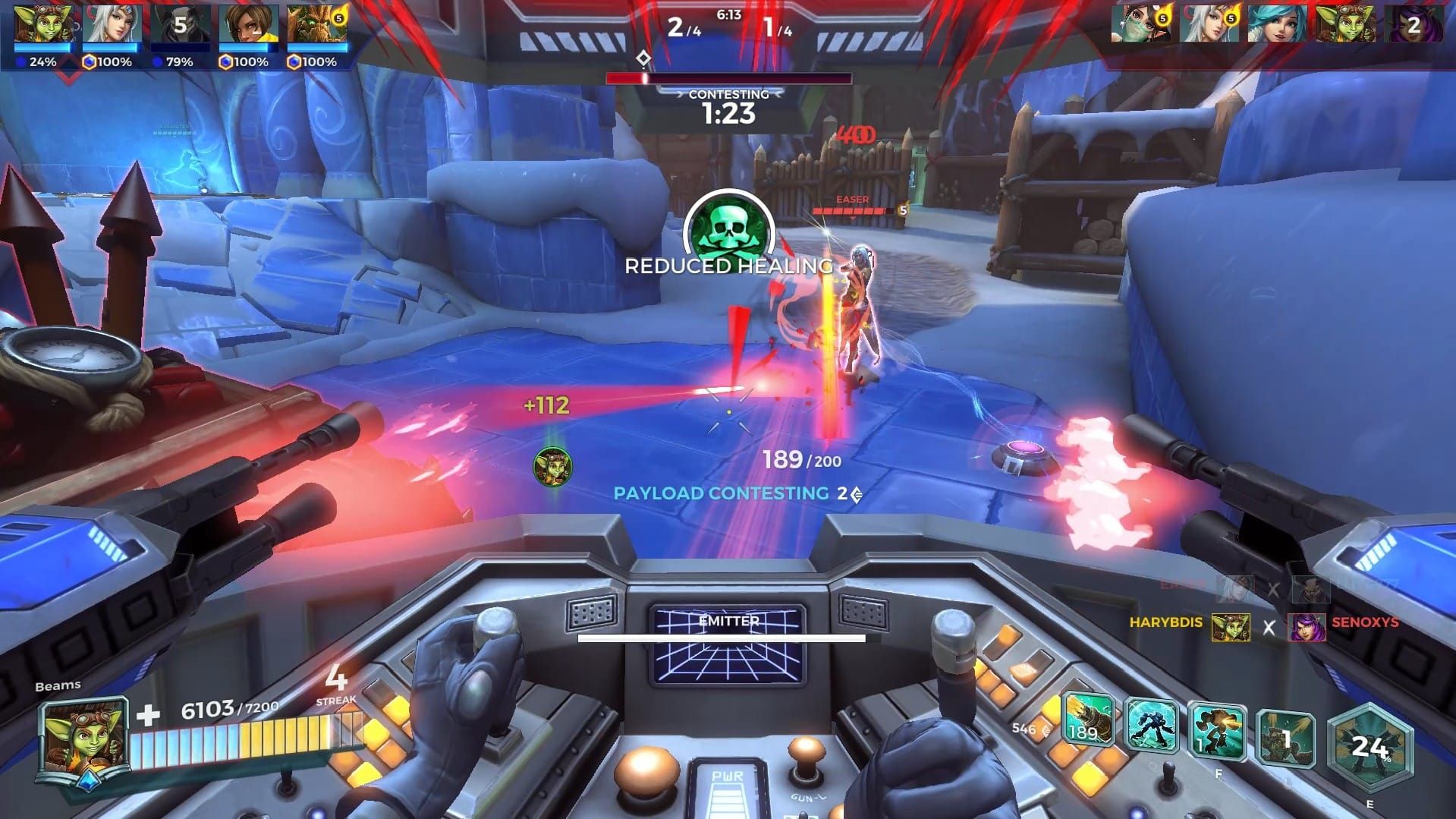 “Flux Generator” gives your shield an extra 1250hp, which makes Ruckus far more sustainable, but still, not suggested as a solo tank. It is a useful talent against burst damage champions, well self-sustained champions, and a possible double-damage enemy team build.

When enemies though pick “Wrecker” item against your powerful shield, it’s lifetime gets seriously reduced, and that’s why you shouldn’t just trust your shield over your low health. Remember, you get far more defensive by using this talent, so play like this.

Every talent has it’s own playstyle, and this is a talent that you should use to distract enemies from vulnerable allies, like your Support for example, and force them to face your unforgiving shield and miniguns instead. Once your Support is safe and re-positioned, fall back and let your Damage and Flanks finish them off.

Always start with the suitable offensive item to counter your team, which probably is “Wrecker“, “Cauterize“, or “Bulldozer“, and even a combination of two. Even if you need all three of them, I would suggest to make a wise decision on just two of the three items. You always need “Chronos“, “Haven/Blast Shields“, and “Rejuvenate“, or even some “Resilience” to counter CC attacks. 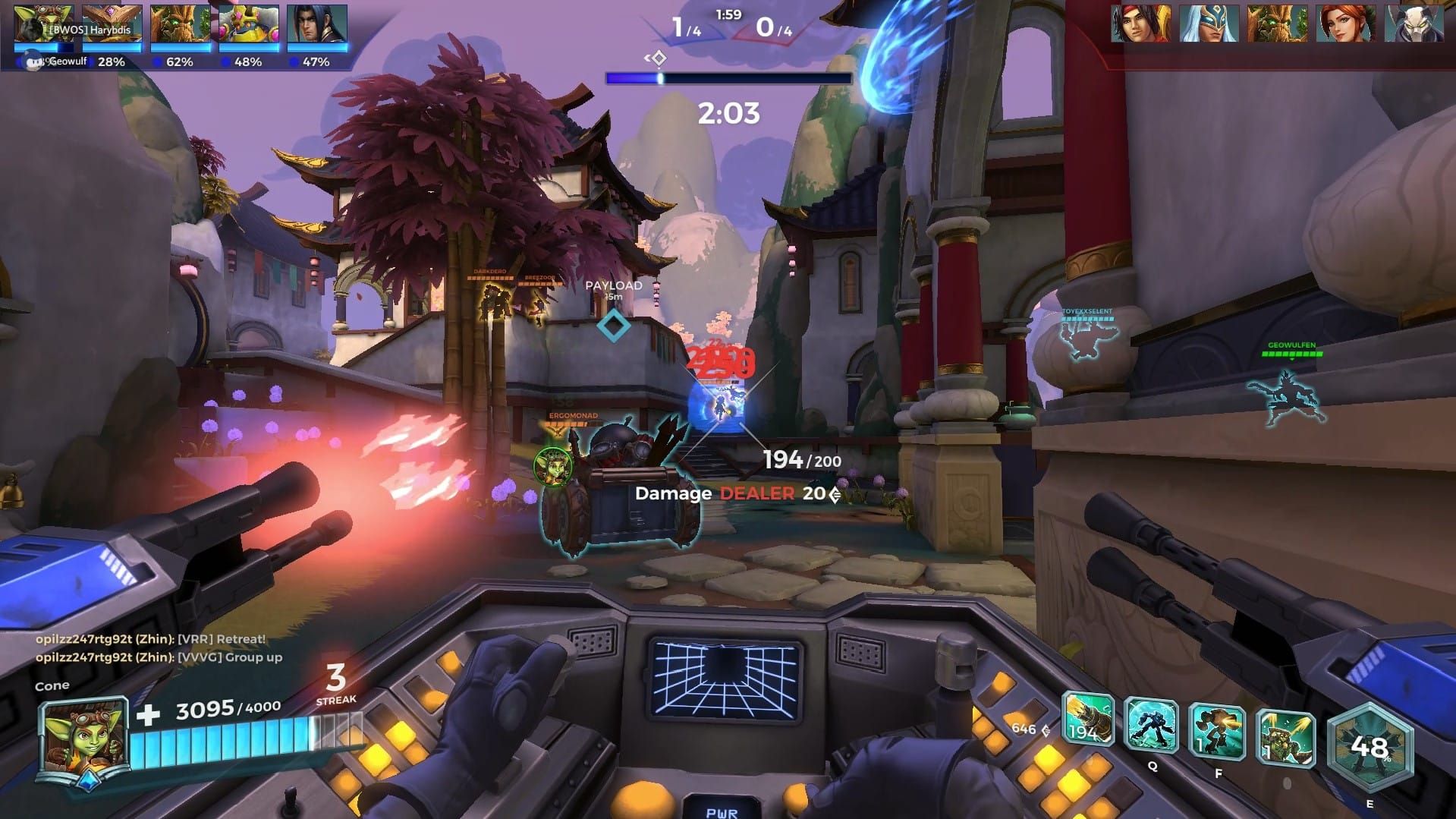 “Rocket Barrage” is the most aggressive talent of Ruckus, and it basically activates two extra charges on your “Missile Launher” ability. A highly effective talent against an enemy two-tank build, obviously because they are easy targets. Also effective in 1v1 encounters, as you can out-damage most DPS champions, before they even be able to break your “Emitter“.

Works well as a kind-of-flanking strategy, where you can surprise the enemy Support and his defender (aka DPS/second tank) with all your three rockets and push them against your DPS allies for the finishing moves.

“Missile Launcher’s” cooldown is on 8s  and by using the “Crystal Capacitor” card on your loadout, which can get your cooldown down to 7.3s to 4.5s. As a full-aggro talent needs to be boosted by healing and shielding counters (“Cauterize“/ “Wrecker“). “Chronos” is again your best friend of your cooldowns, but first prioritize “Rejuvenate” if enemies’ “Cauterize” is not affordable, and “Haven” / “Blast Shields” if they try to take you down by attacking you in groups. 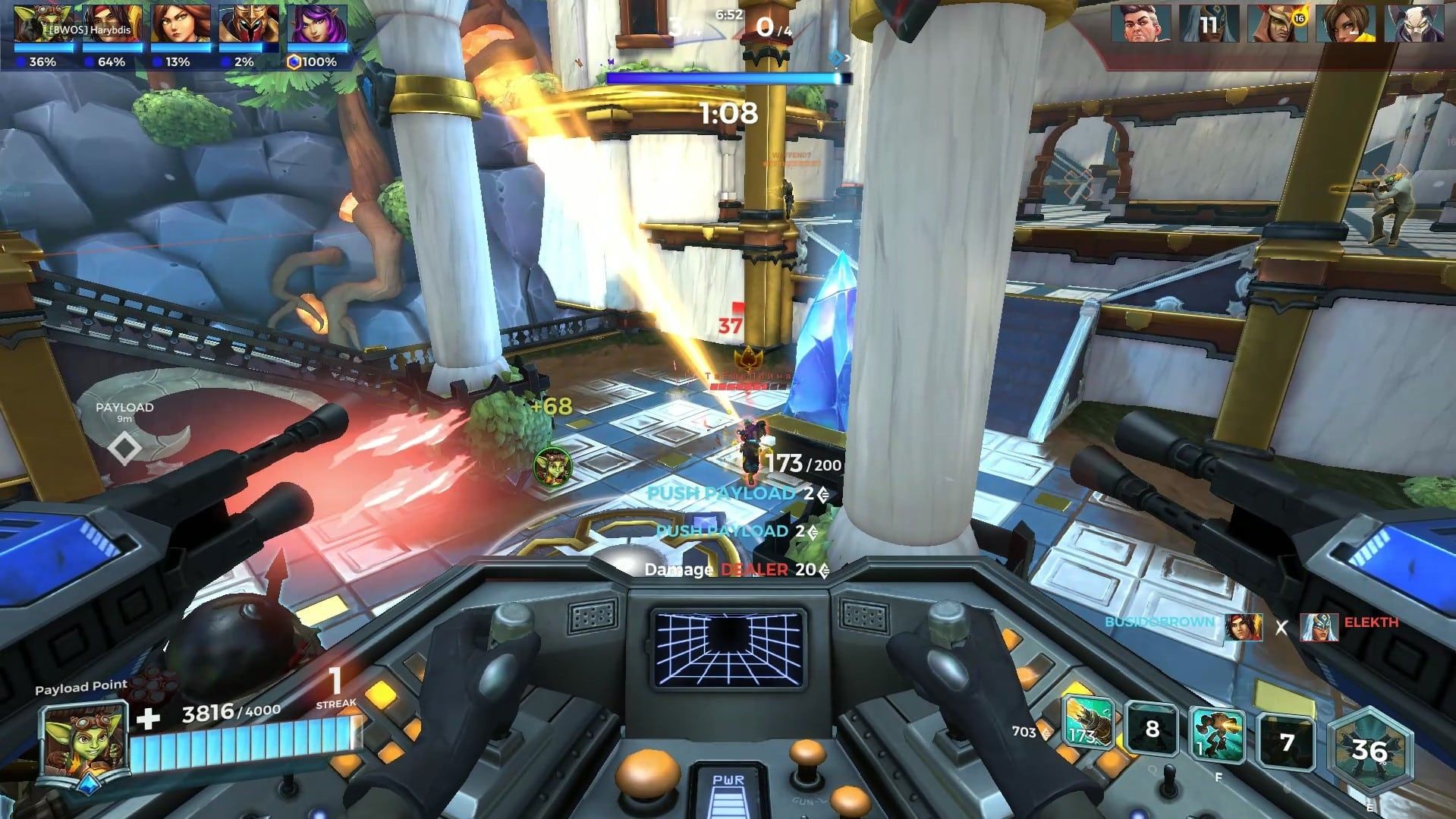 This talent is the less used by players, and if you ask me, not in vain. It’s not really useful in the most cases that you will face in game. With this talent, “Advance” gains a 3rd charge. Standing still causes Ruckus to jet upwards.

This talent is useful for flying to high ground spots fast and easy, or avoiding attacks (ex. Bomb King ultimate ability), avoiding annoying deployables ( ex. climbing over Inara’s wall, avoiding Dredge’s “Broadside” etc.) and confuse enemy shooters. I will pick it from time to time in casual matches,but i have never picked this talent in ranked matches, as the others are obviously far more viable.

The item strategy stays same, by first focusing on offensive items ( “Cauterize” / “Wrecker” / “Bulldozer“) and then focus on lowering your abilities with “Chronos“. Last focus on getting your defensive items (“Haven” / “Blast Shields” and/or “Resilience“) and always “Rejuvenate” when your healer is around. 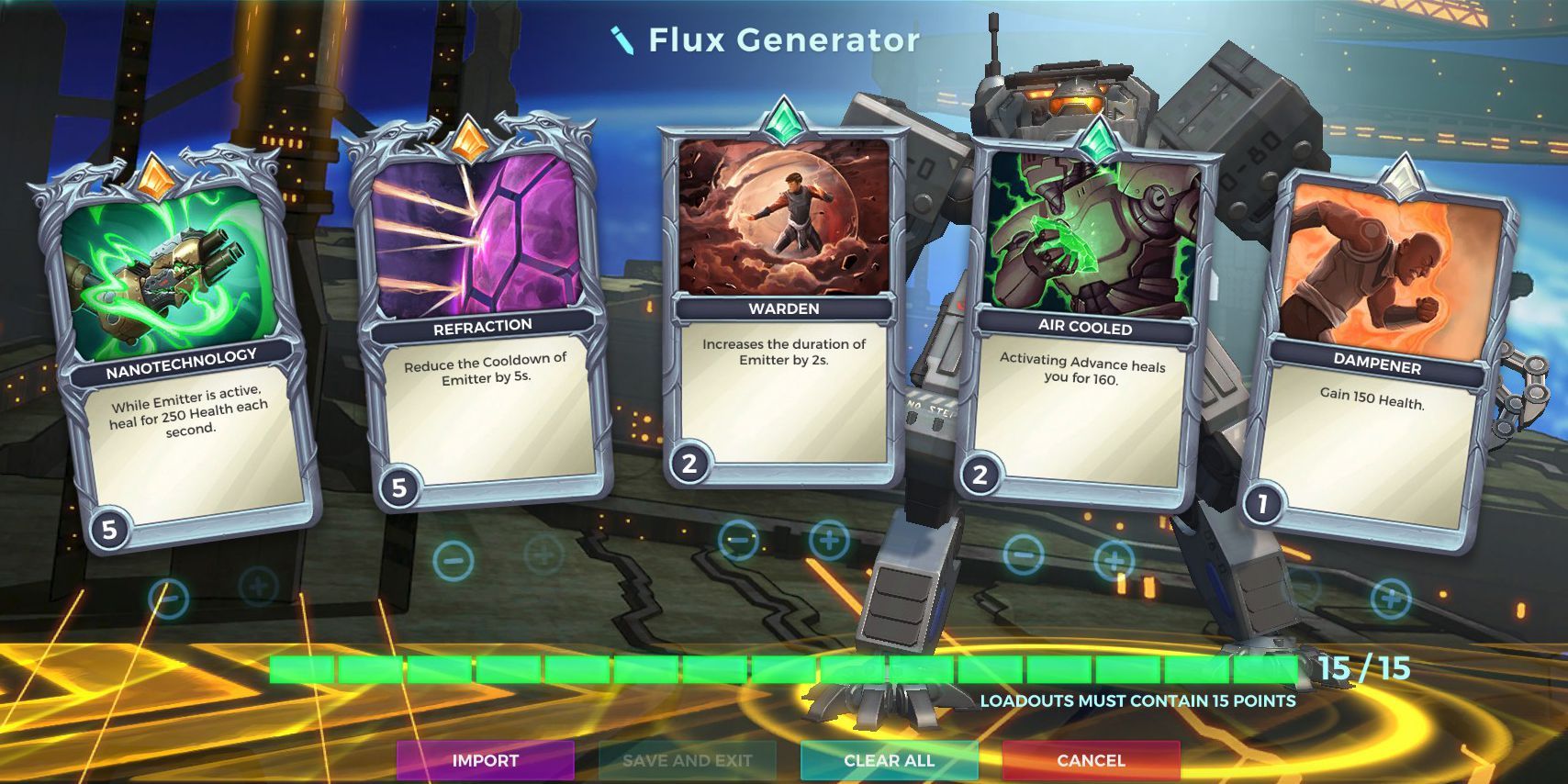 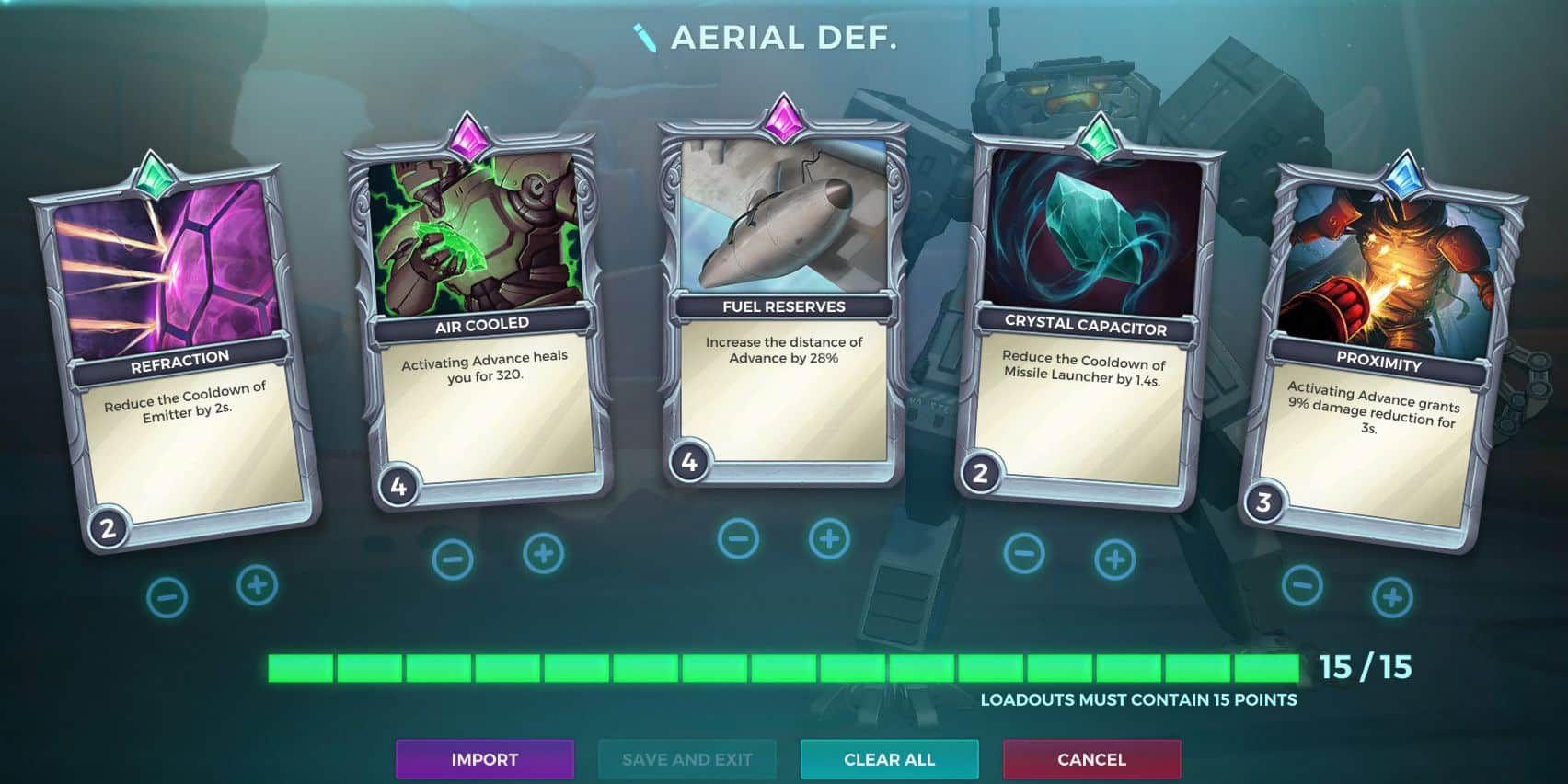 Feel free to post you own opinions and recommendations on the loadouts. They are more than welcome!