Skye was noble by birth, abandoned a life of luxury and wealth to pursue her dreams of excitement and adventure. During her time spent on the streets, interacting with the criminal underworld of the Realm, she discovered a natural talent and boundless passion for killing. When her career as a contract assassin brought her fame and fortune, she caught the Magistrate’s attention and now serves as one of Grand Magister Karne’s closest advisors.

Skye was released in Paladins along with the “Original Eight Champions”, on November 17, 2015, during the first Closed Beta released. Skye is a flank champion with low mobility who relies on her stealth to get behind enemy lines and escape with “Hidden” ability, that makes her go in stealth for a brief time. Her “Wrist Crossbow” and “Poison Bolts” let her burst vulnerable targets at close range, while her “Smoke Screen” makes her invisible for a short duration upon entering it. Skye’s ultimate skill, “Time Bomb“, throws a bomb that, upon detonation, deals massive AOE damage while destroying all shields.

However, her damage from a distance is very low and unreliable, her stealth is partially dispelled while standing near enemies, a loud noise is played when Hidden runs out, and her bomb can only damage targets within line of sight, all of which cripple her potential when fighting against experienced opponents. 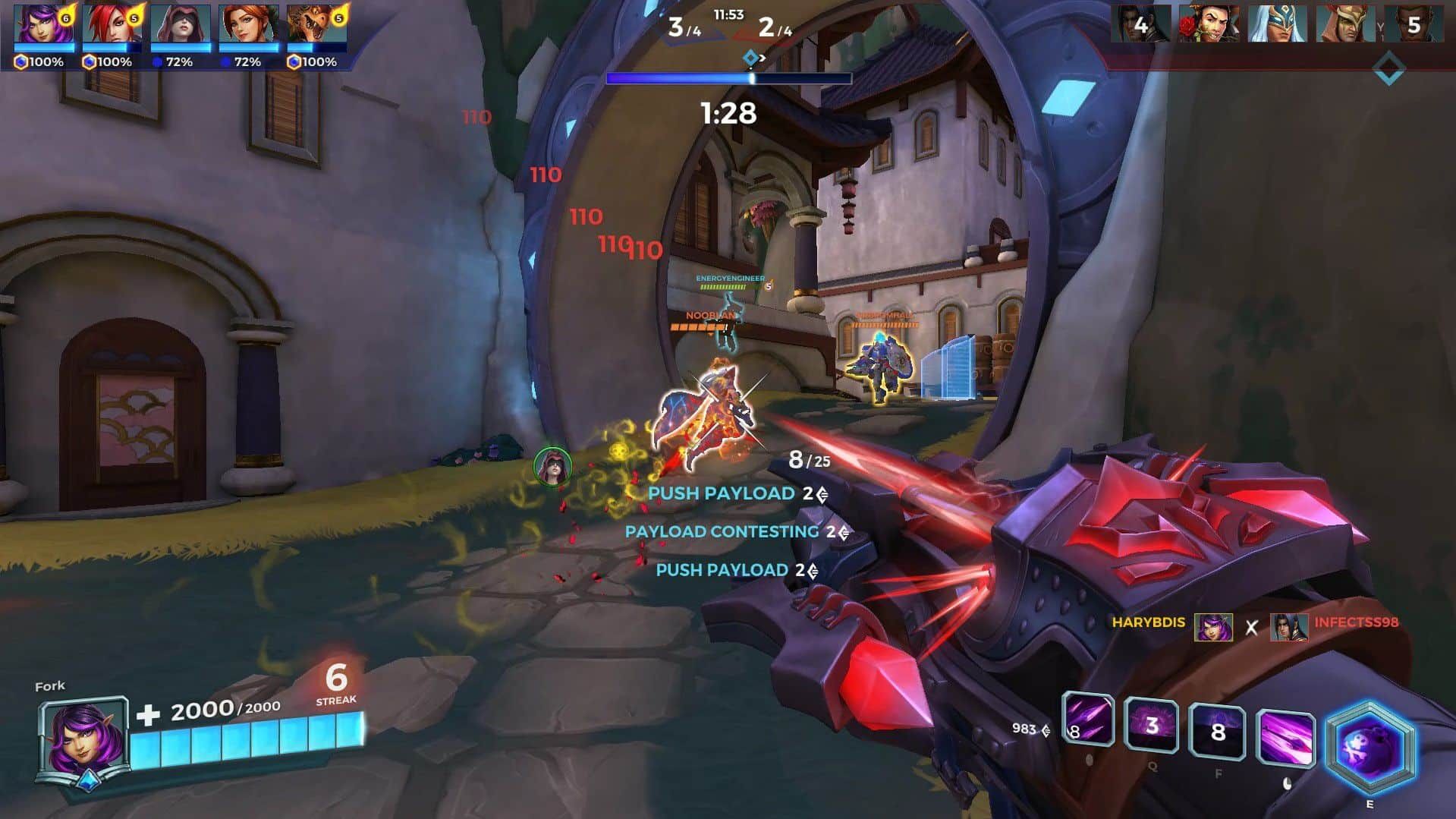 Skye’s basic weapon attack is a “Wrist Crossbow”, or as described, a “wrist-mounted energy crossbow”, that deals 130 damage per shot, every 1s, at Short Range. It is a direct damage weapon and it can be countered by “Haven” item.

It’s better to combine your first and secondary attacks when you attack an enemy for the kill. Not suggested at long range, as you reveal your position to enemy flanks and DPS, as well as your damage output in long-range, is ridiculously low. 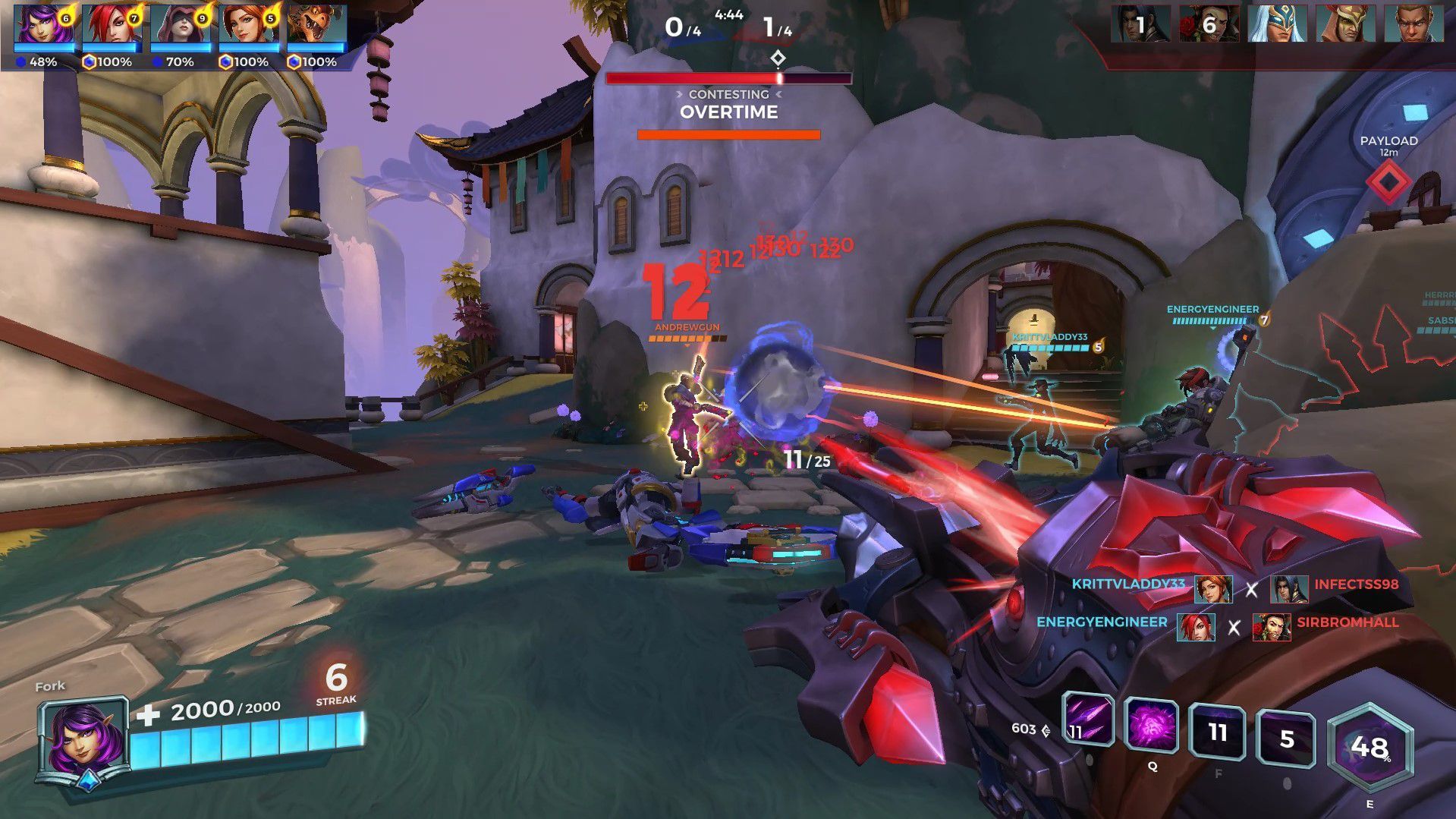 The secondary attack of Skye is the “Poison Bolts“, which fires 3 bolts in succession, each dealing 10% maximum Health damage over 4s. It is also a direct attack that can be countered by “Haven“.

When using it along with your basic attack is massive burst damage on 1v1 fights, especially when used with the “Debilitate” talent, with which “Poison Bolts” now deals 30% more damage, twice as fast. This ability though is not the easiest to aim, but you can eliminate the chances to fail by getting the closest possible. Remember, you are all ways more effective in close combat. 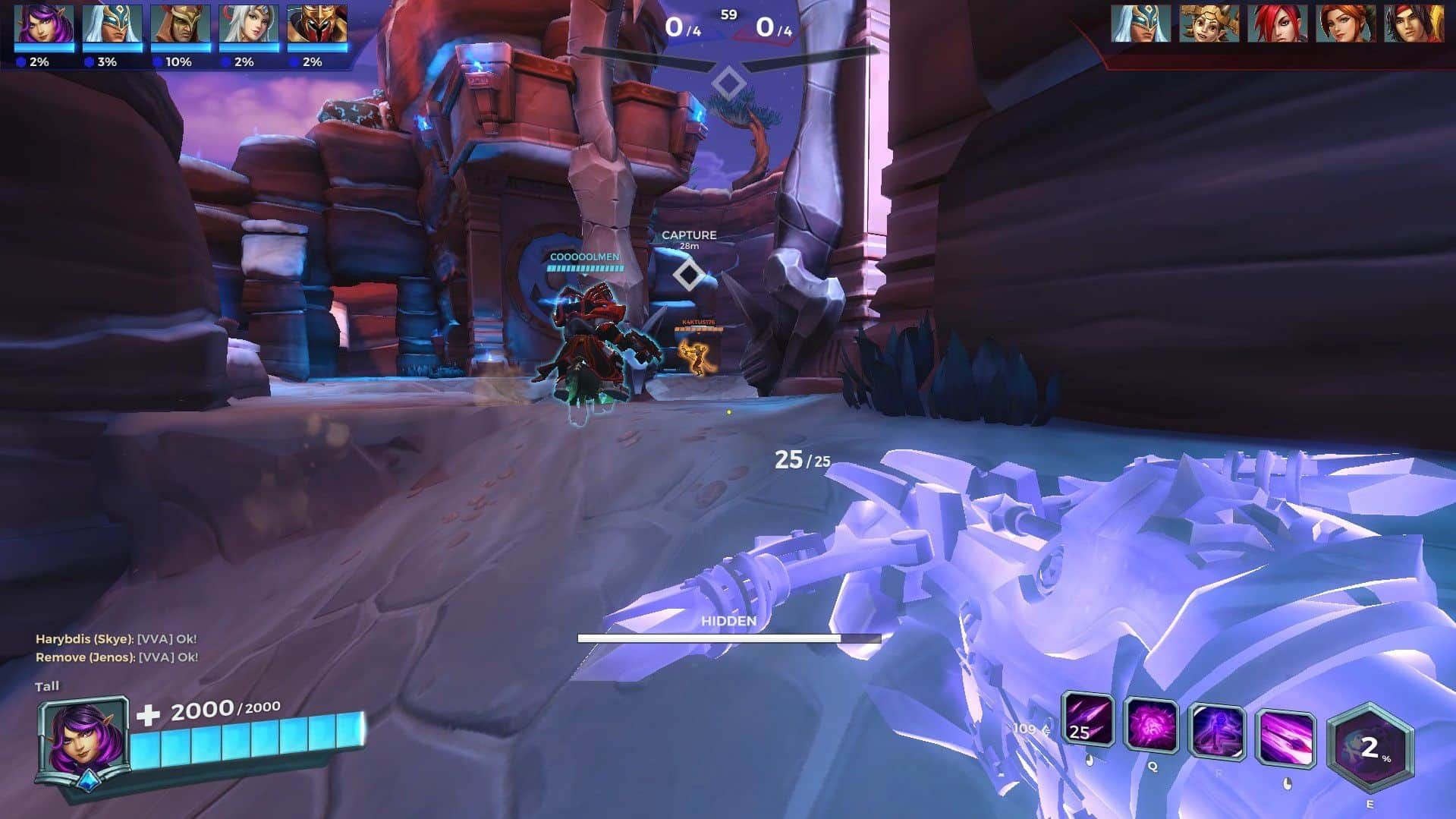 With Skye’s “Hidden” ability, you enter stealth for 7.5s. The catch though is that getting too close to enemy players will reveal you while in stealth, and it’s a common mistake that I see players do. They rely so much on their stealth that they make themselves incredibly vulnerable. Remember, it can also be countered my “Illuminate” item, and it’s a common thing to do when Skye’s to be encountered.

Don’t get right in front of their eyesight while stealthed, always prefer backlines instead. Don’t try to drag an enemy alone when they are all grouped, let your tank and DPS to spread them, so they think they reach safety in tight hallways and close quarters, and this is your time to hit. 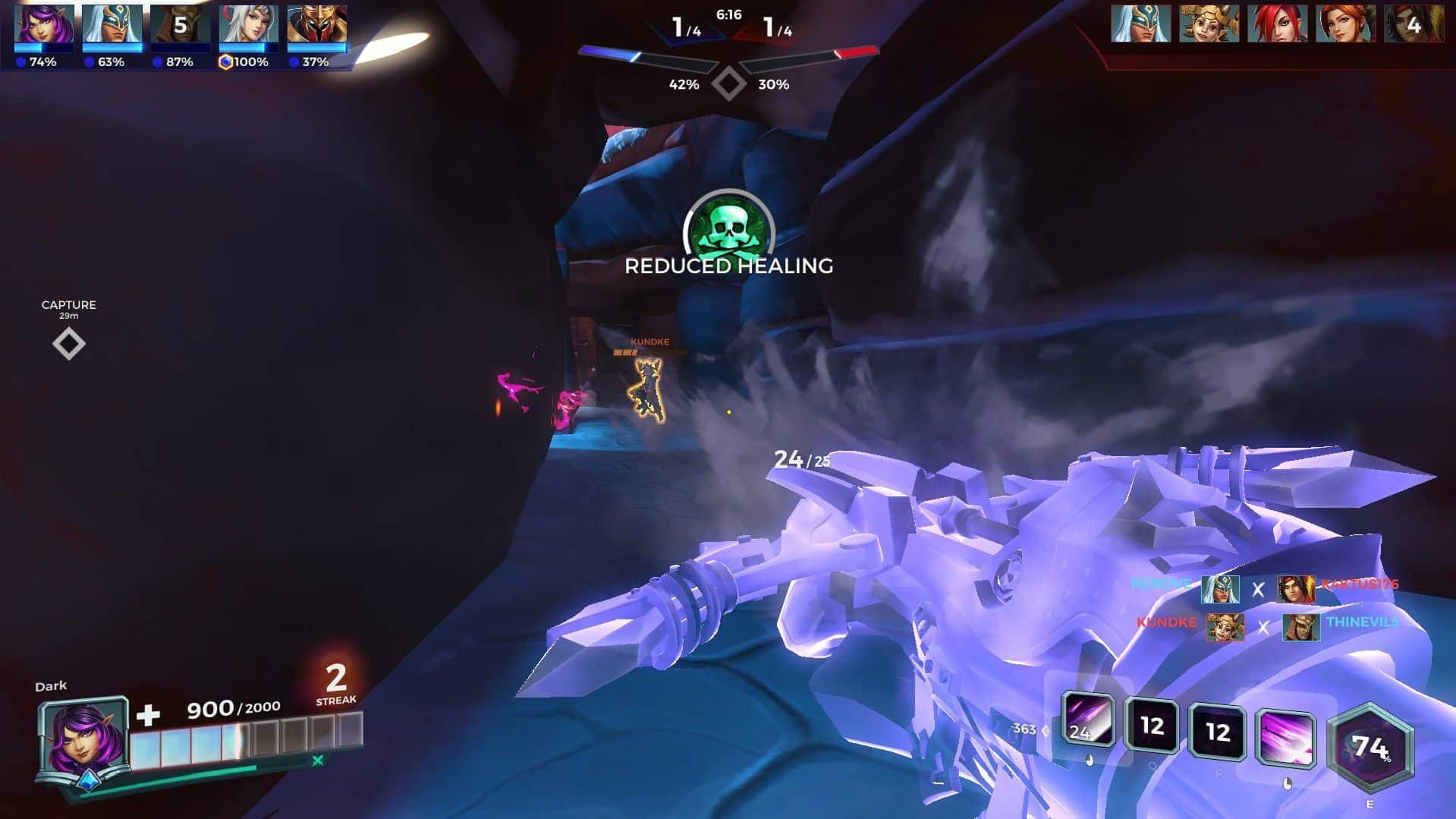 “Smoke Screen”, is your “emergency exit” from harsh situations, where you basically throw a “smoke bomb”, which creates a “smoke cloud” when it explodes, that lasts 5s. Grants a 3s stealth every 1s.

You can use it to confuse enemies, so you can get away or finish a kill in a heartbeat. remember that once you shoot you make yourself visible, so reposition yourself every second. 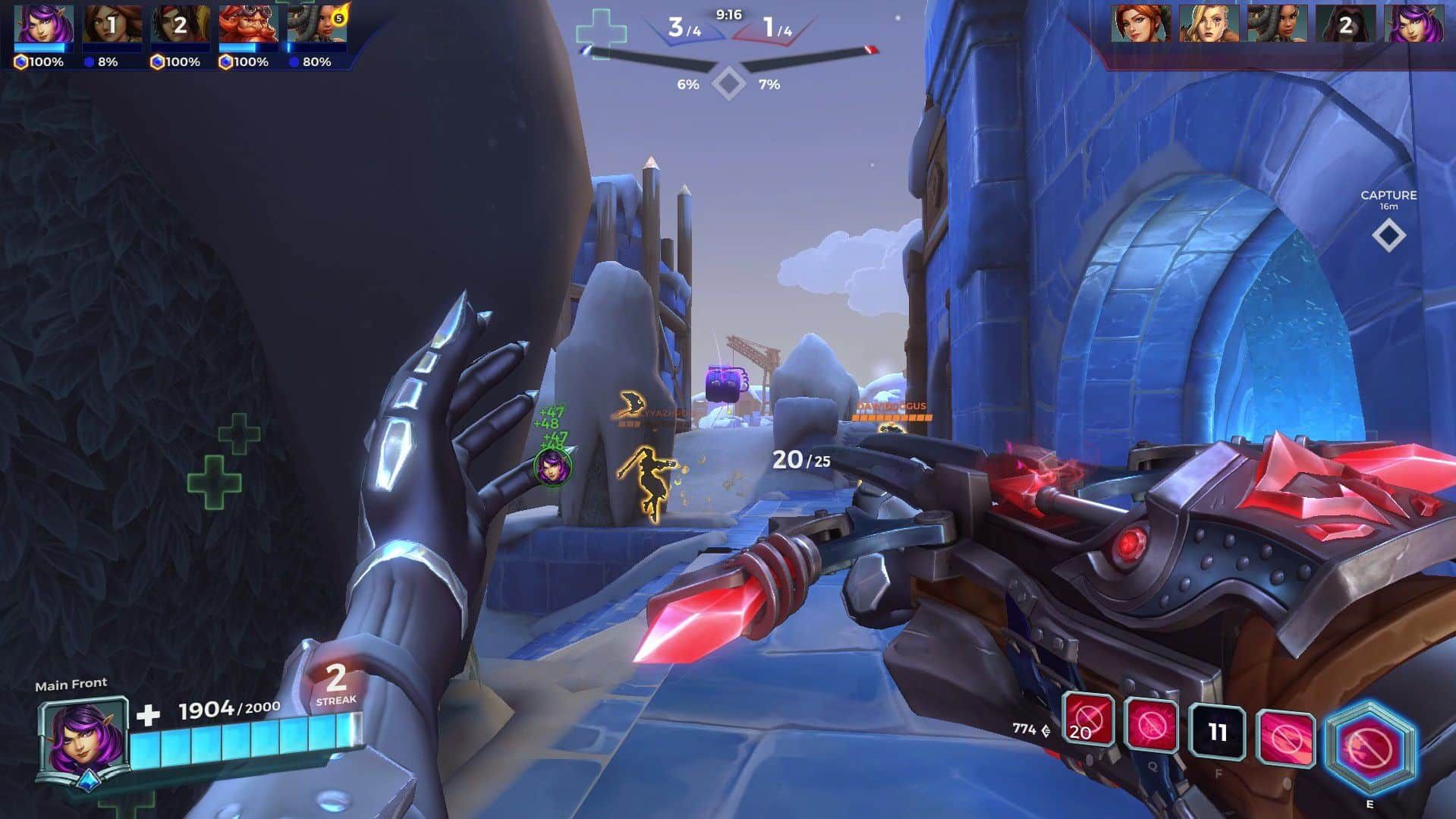 Skyes’s “Time Bomb” ultimate ability is exactly what is named after. Throw a bomb that explodes after a brief time, and deals 3000 damage. Destroys all shields as well.

Experienced players find it easy to cover themselves most of the times, so prefer to use it after some teammate used any kind of CC ability, so you can have time to act. A good combo is Seris’ ultimate ability, as well as Inara’s ultimate, or even when Bomb King’s “Grumpy Bomb” explodes.

Also don’t throw the “Time Bomb” in places that enemies might find cover behind objects, like the payload. Even if the AOE is big, if enemies hide on the other side of the payload, or behind objects that might be in the area, they will be saved, and probably acknowledged of your positioning.

You can also not go for kills necessarily, but for a very effective push. Just before the payload touches the enemy point, and especially when it’s the last point for the win, a good choice is to throw the “Time Bomb” in the exit of their spawn point. So you limit them in the spawn point and you go for the easy push to victory! 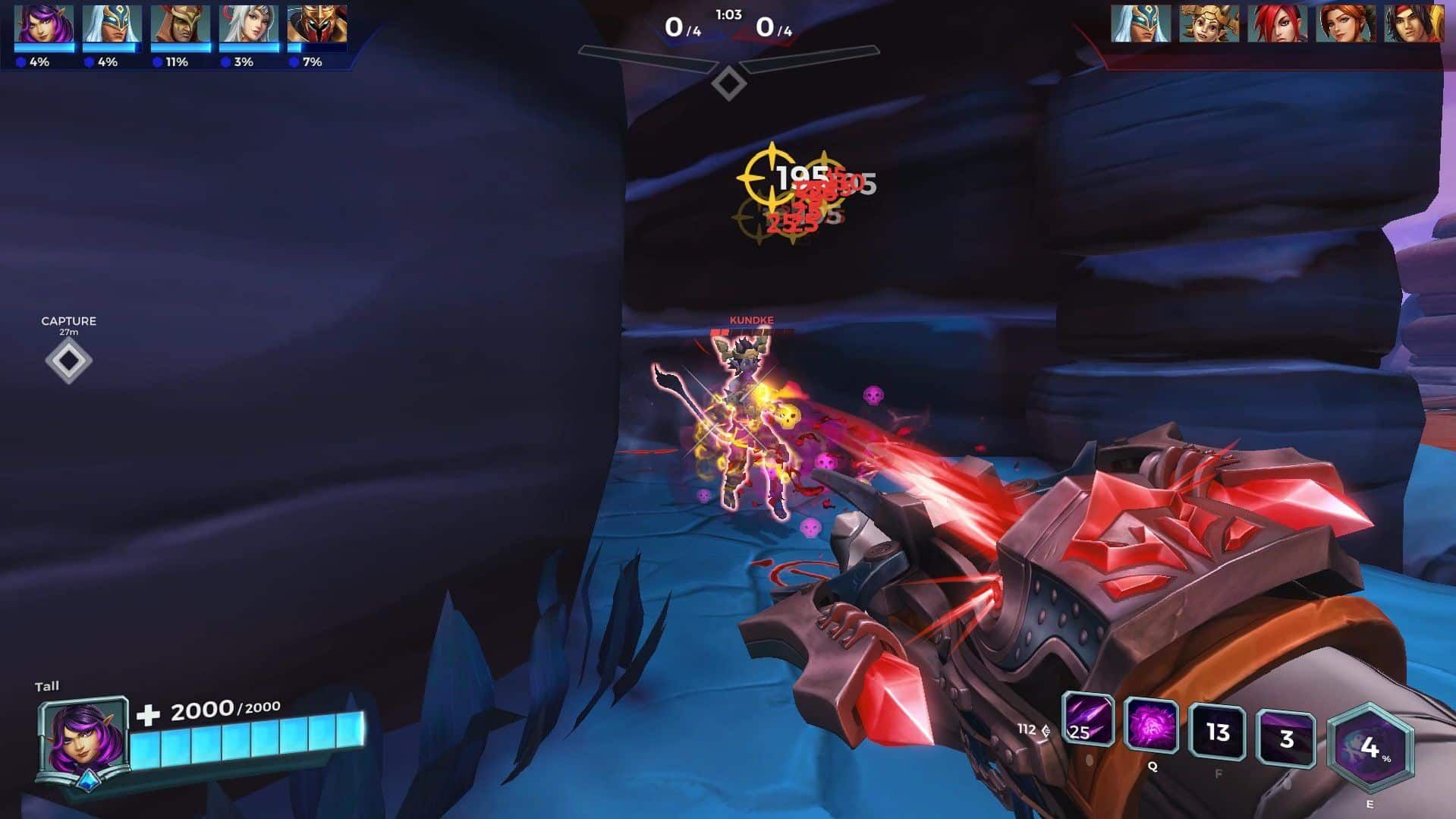 I want to be pretty honest with you, at least on what I think on Skye’s talents, and my honest opinion is that, unfortunately, Skye’s talent, “Debilitate“, is the only viable talent that she has with the recent nerfs and rework done to her.

“Debilitate” actually, makes Poison Bolts to deal 30% more damage, twice as fast. I actually find “Poison Bolts” weak enough without this talent, and that’s why I think it’s the only viable talent.

Always must be paired with the suitable “Offense” items, (mostly “Cauterize“, but in case of Torvald, for example, equip “Wrecker“. If you don’t feel pressured by the enemy DPS, get “Nimble“, as it is the most powerful item for Skye, to chase down the low-hp enemies, or escape fast if she’s been spotted. The rest of the items can be suited, depending on the situation. 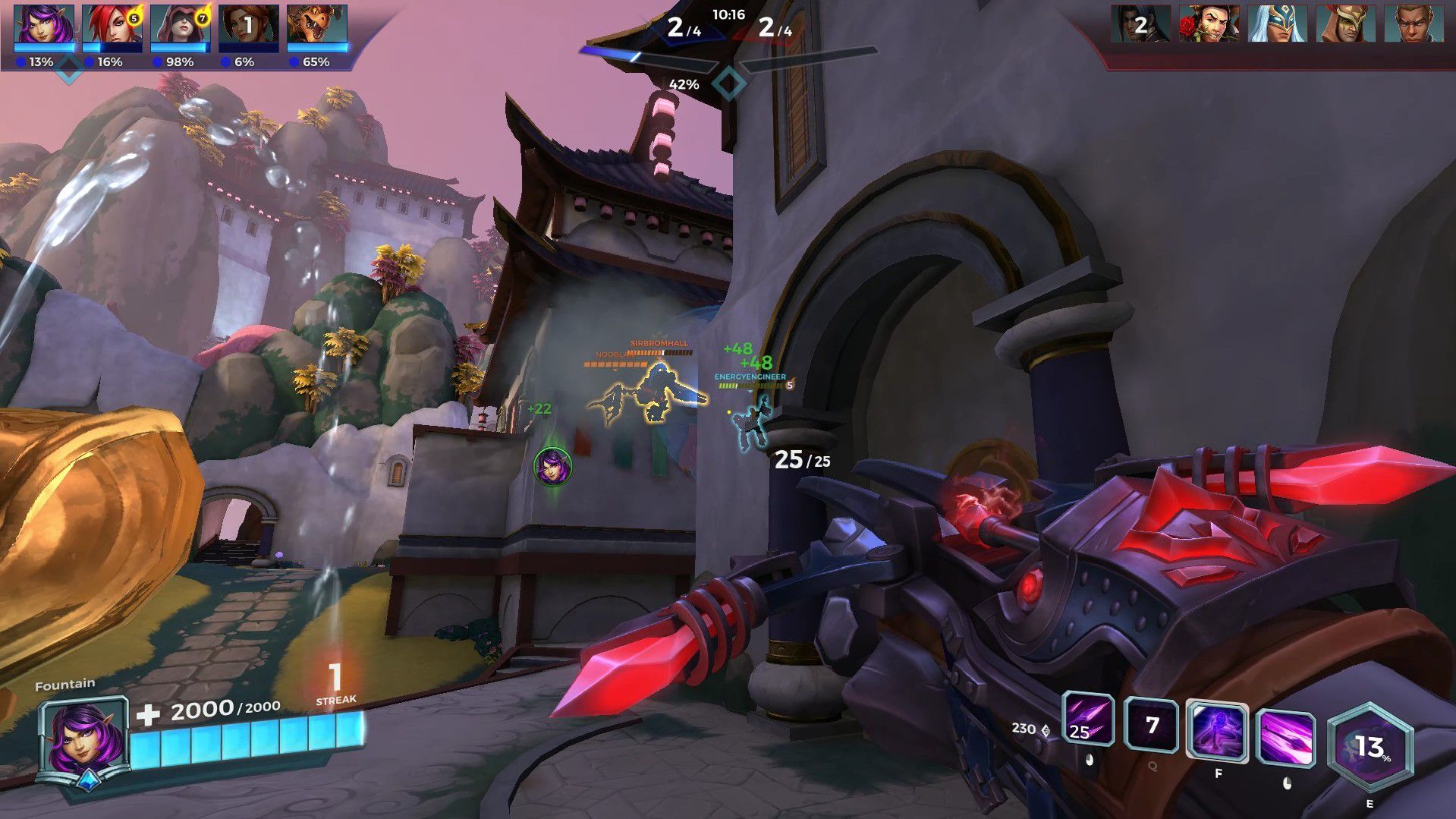 This talent used to be, kind of overpowered, until the recent changes applied. They switched it to a supportive talent, which turns “Smoke Screen” into a “healing-bomb”, that heals allies inside it for 400 Health every 1s.

In my opinion, a pretty high-damage-flank, as Skye is, the least she needs is a talent that heals allies, but not herself. I consider it as the worst talent Skye has right now, and to be pretty honest, I tested it again and again when the talent release, but I always found myself regretting this choice.

I’ve won games by using this talent, but the struggle was real, especially against competitive and experienced players, this talent is a joke. She’s not a suitable champion for “filler-support”, and just by adding a supportive talent, is not going to enough. 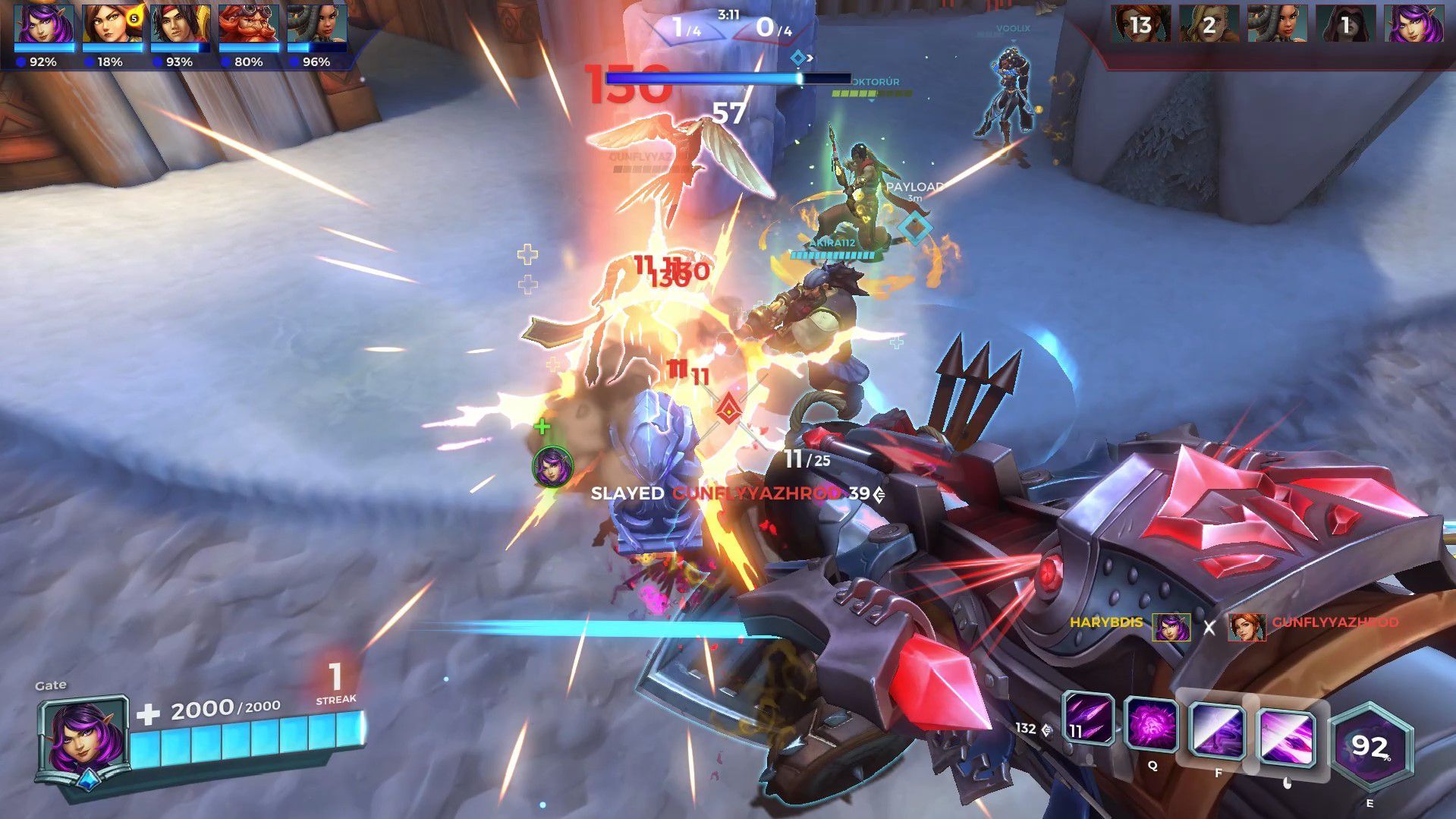 Another talent that I don’t really use. And it is not because it is terrible or completely unviable. It is just because in between the two “flanking-talents” Skye has, “Debilitate” is far more reliable, as it’s damage output is much quicker and effective.

The only situations I can recall this talent served me well, were situations that we had 2 DPS, and they were pushing too much, doing unbearable damage, while I was hiding in backlines, “Hidden“, shooting the already half-dead enemies, and getting back in stealth again, as all cooldowns get reset.

Still, I was not “necessary” for finishing those kills, and I really felt like I had zero-impact for my team, as they could do fine without me as well. The fact that I have a proper loadout for “Debilitate“, gets my cooldowns to be 100% viable, so I find this talent a bit of a “filler”.

The following loadouts are made by me personally, after hours and hours testing combinations. Tried all of them multiple times, and I can tell that worked pretty good, considering I am not playing Skye as a main. 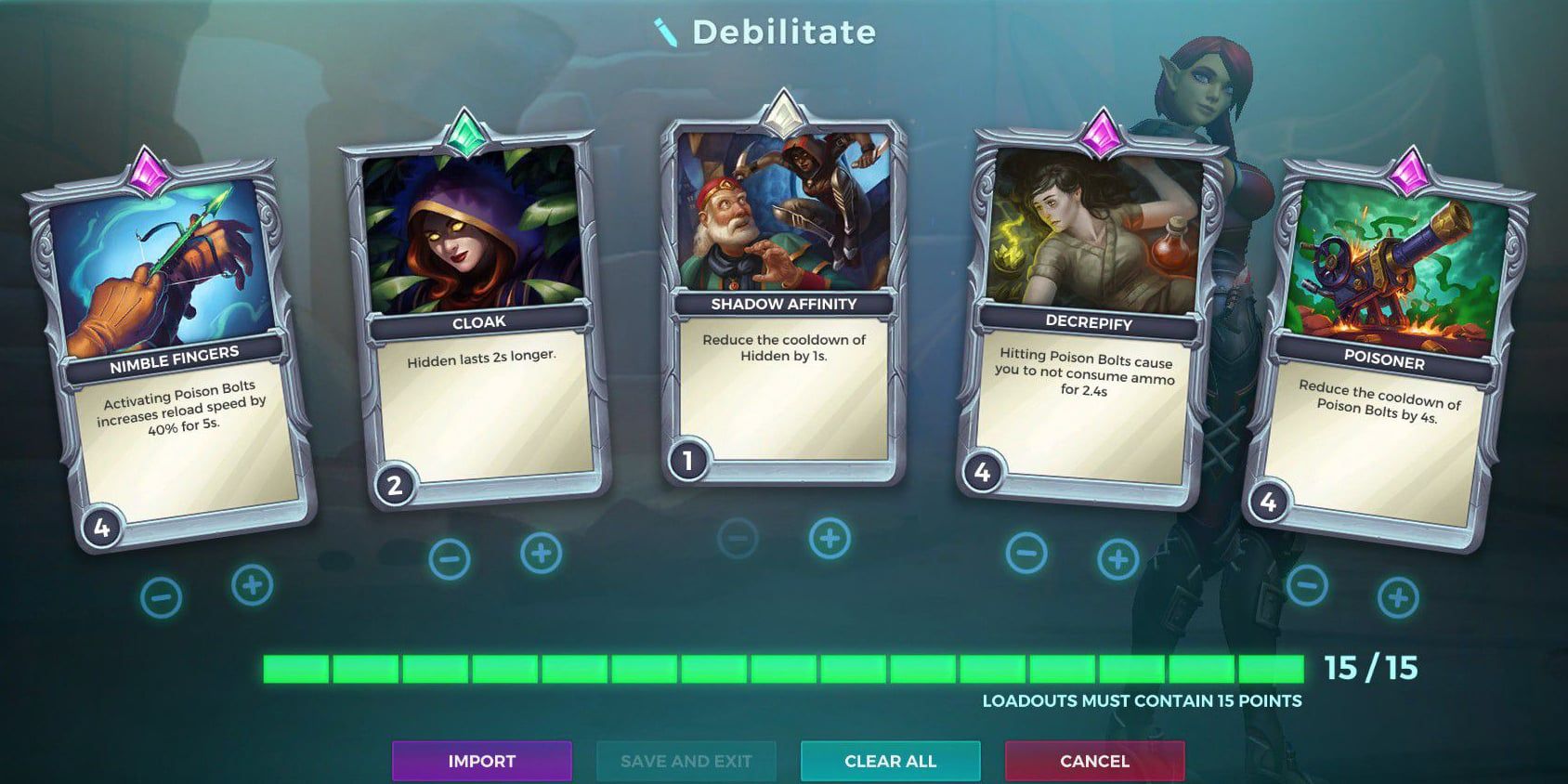 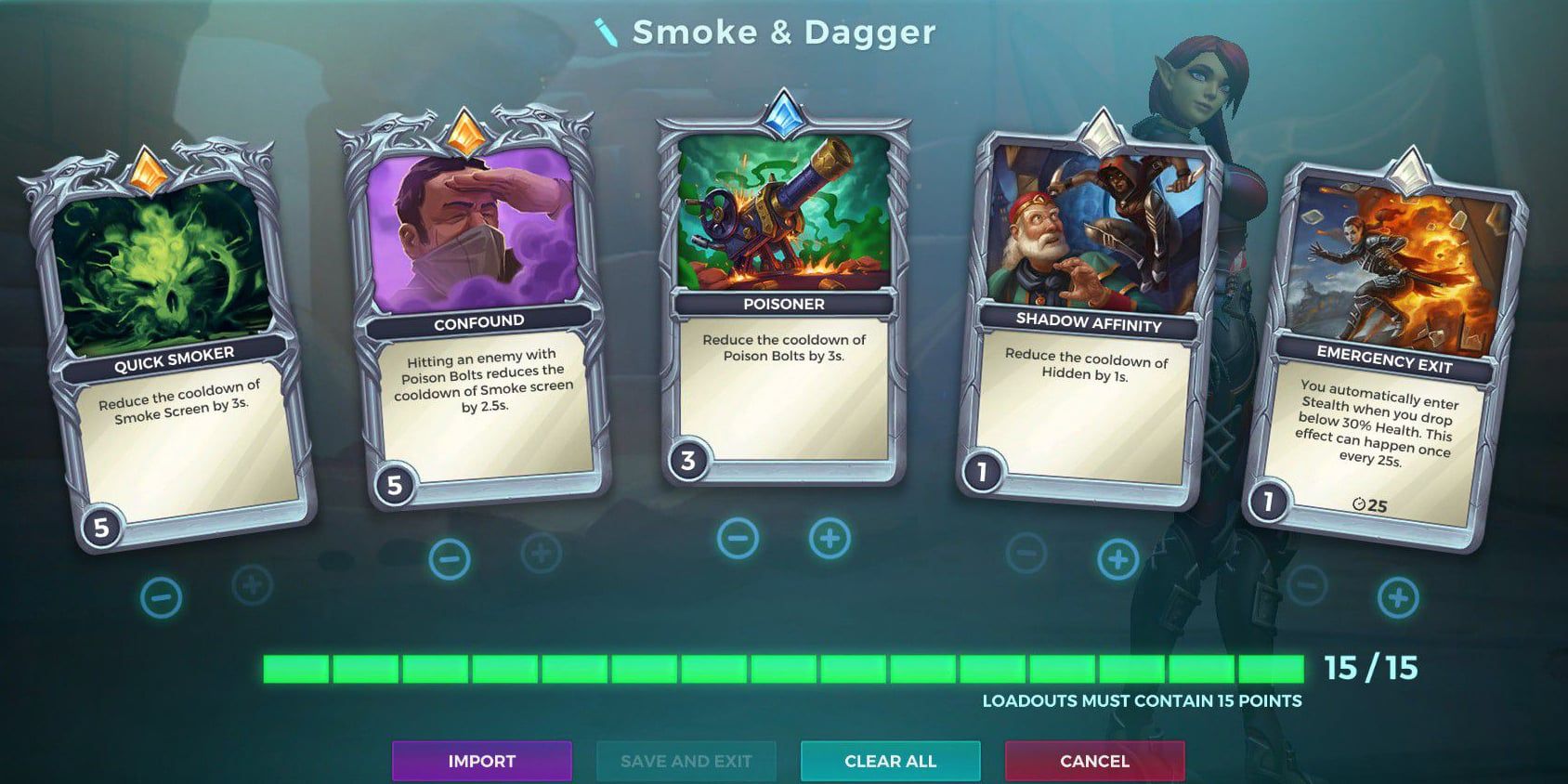 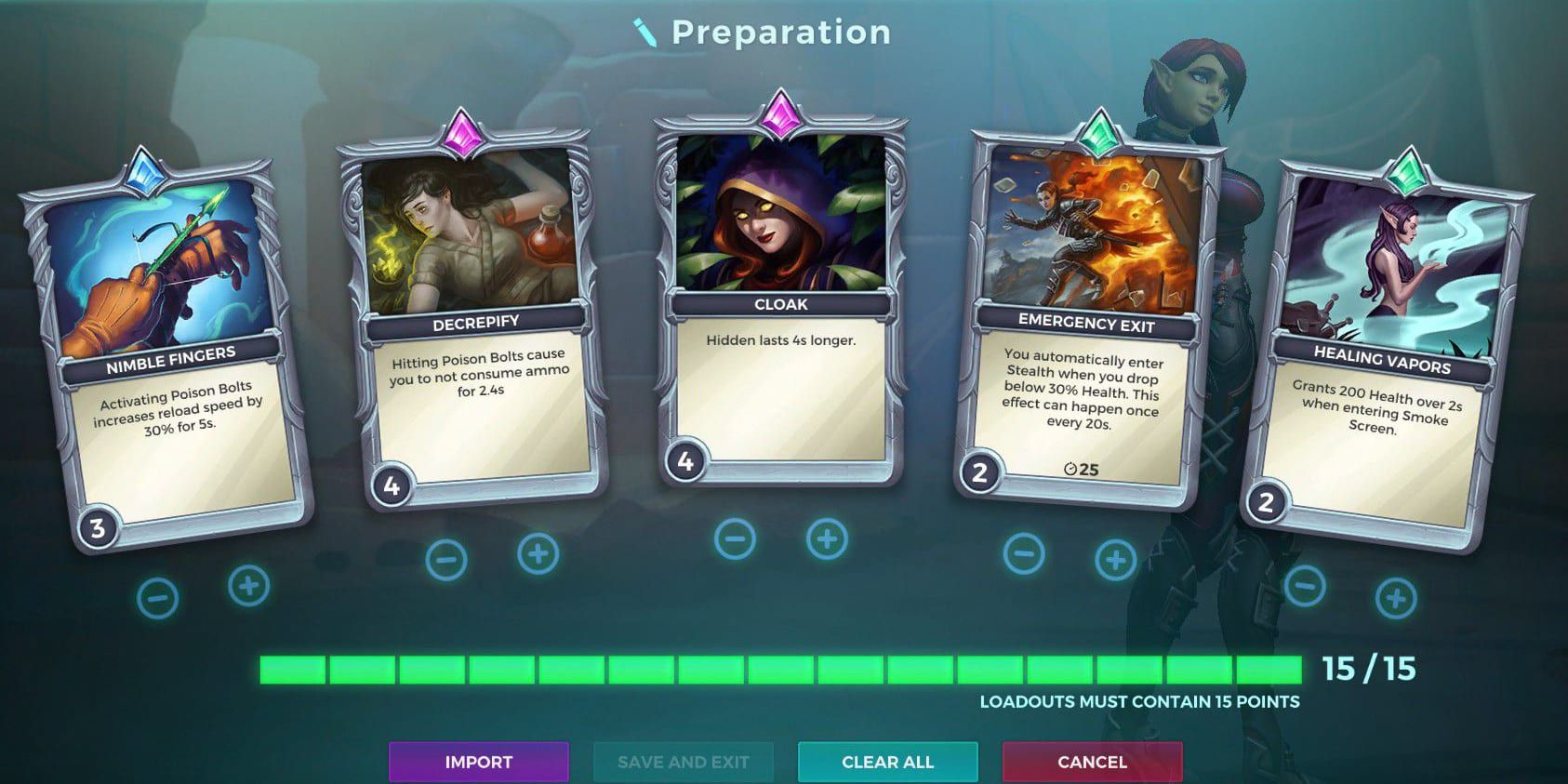 Feel free to post your own opinions and recommendations on the loadouts. They are more than welcome!