Star’s End is one of the best grinding locations which is popular for its rare drop – Black Distortion Earring. Although it can’t compete with the recently released Hadum locations, it is a big step up compared to other grinding zones that require overall less AP and DP.

In April 2021 Star’s End received an update that added 3 pillar shaped structures – Vessels of Inquisition, that offer stationary style of grinding. We will go in details in later section of the guide.

July 28th Vessels of Inquisition has received slight change, ranged type of mobs was added to prevent players from standing in place.

The node is located to the West of Calpheon and it’s worth investing your Energy, as it benefits you with +50% Item Drop Rate for every 10th monster you kill.

The most common route is through Calpheon:

An alternative viable route, which requires less CP and goes through Ash Forest, is connecting from Grána city:

By investing 1 more CP into the Excavation node of Star’s End, you can send workers to collect Mass of Pure Magic, Trace of Violence and Trace of Death. If these materials are important to you, connecting through Calpheon will save you some time. 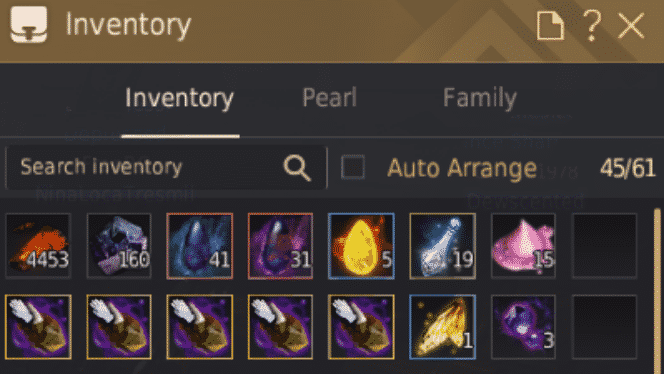 Your average hour of grinding with blue Item Collection Increase Scroll (60 min) probably will look slightly underwhelming. You have to keep in mind, that it is possible to grind 15+ hours and getting no Distortions drops. But if you happen to drop a Black Distortion Earring you would earn an additional 272* Million Silver making it ~400 million profit in one hour.

As you can see the spot has low lows and enormous highs, making it one of the most inconsistent grinding spots in Black Desert Online.

A good starting point for most classes is 261 AP Kutum and 308 DP. With anything less, you would gain more profit on Aakman or Hystria.

269 AP Kutum coupled with 324 DP is the point where you will reach high efficiency. By acquiring at least 7 more DP you will be also meeting gear requirements for Sycraia Underwater Ruins (Abyssal Zone), which offers not necessarily better, but more consistent profit than Star’s End.

Here is an example of a 265 AP and 313 DP build suitable for Star’s End with an emphasis on CC resistance and Damage Reduction:

Next important stat is your Accuracy and Accuracy Rate. You can see it by pressing I and clicking the “View My Stats” button.

To hit the mobs with 99% chance you need 450 of All Accuracy with at least +4% Accuracy rate. Some of the classes have additional Accuracy Rate or Evasion Debuff on their skills. If you have either of them in your kit, you might make it with less Accuracy. We will see how to increase your Accuracy with the buffs in the section below.

If you decide to get rid of your Agris Fever in Star’s End, you won’t be on the losing side. Besides Elvia spots and others such as Olun Valley, it is quite an efficient spot for your Agris Points. In one hour you will be burning around 70 000 Agris Points, depending on your gear.

In terms of Experience, it is slightly better than the main Mirumok Party spot, but worse than solo. You will be looking at ~0.8% an Hour at level 61 with 260% Experience Buff.

Throughout your grinding you will make use of the structure called Unstable Star Debris.

As monsters are immune to Crowd Control, this is the only way to CC them. Once destroyed it will knock down nearby monsters, even the ones that are ignoring you, due to aggro limitation of 10. It also has the chance to kill them instantly!

Occasionally you will have a chance of spawning an Elite Monster called <Possessed> Apostle of Malevolence. He has more HP comparable to other monsters.

If not defeated within 5 minutes he will disappear. It is reasonable to kill him in your next cycle of rotation, since you can agro respawned mobs simultaneously, as opposed to only focusing him. Also, he is guaranteed to drop at least 1x Caphras Stone and 1x Ancient Dust. 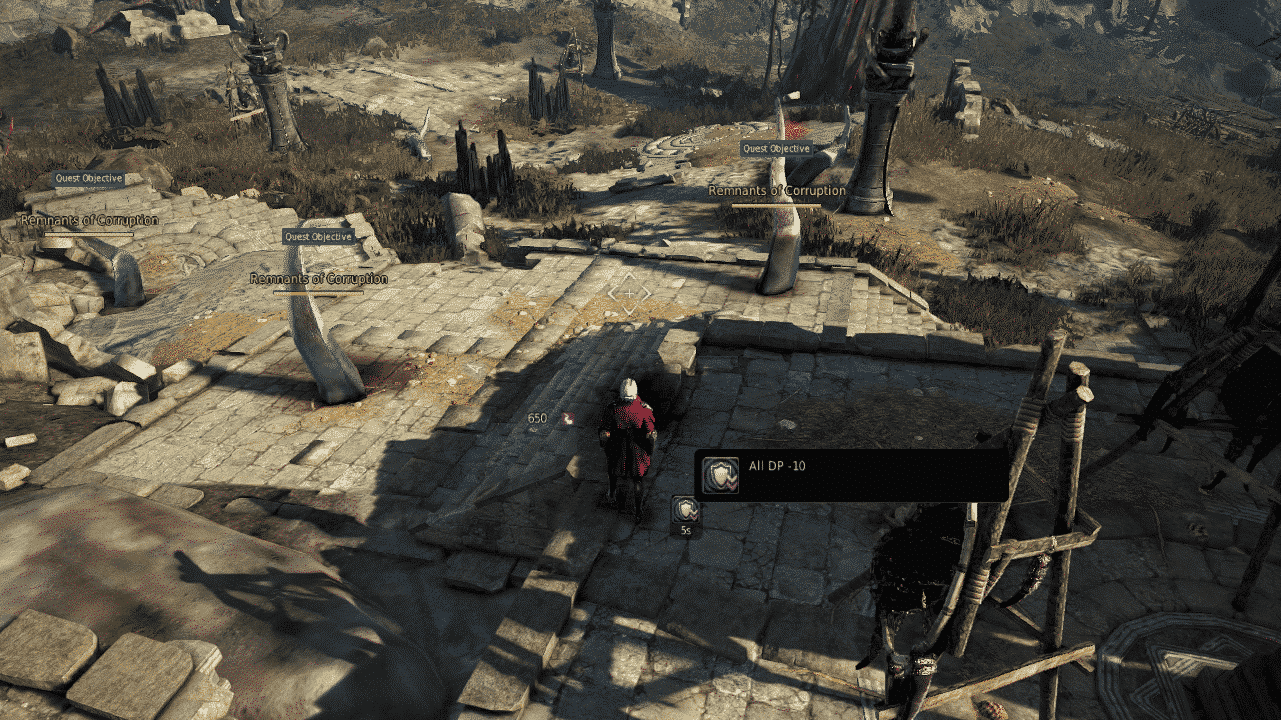 One thing to keep in mind for players with low DP, is the debuff applied by Remnants of Corruption, especially at nighttime.

This is something you will have to get used to. 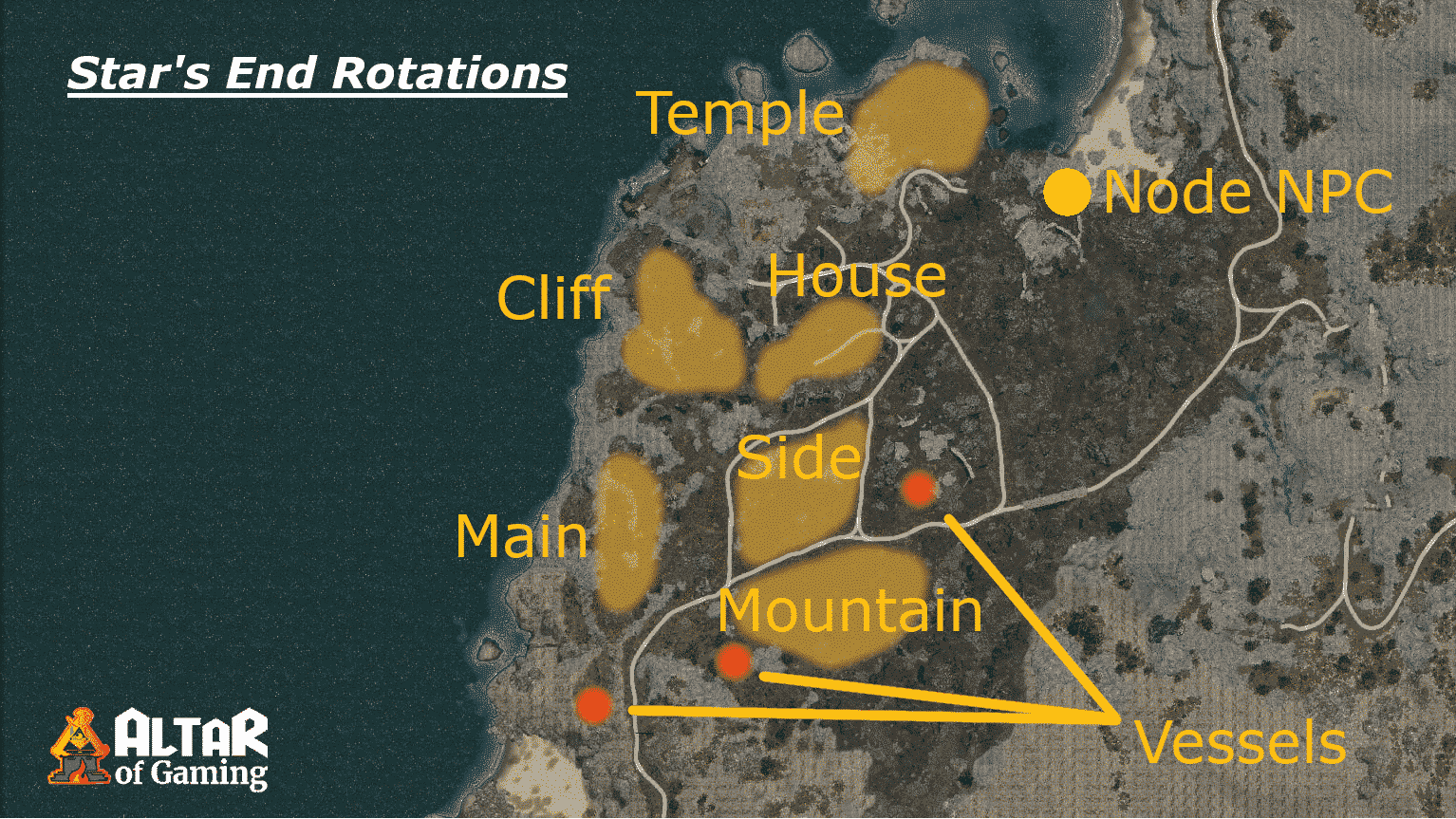 Let’s do a quick review of all Rotations on Star’s End. 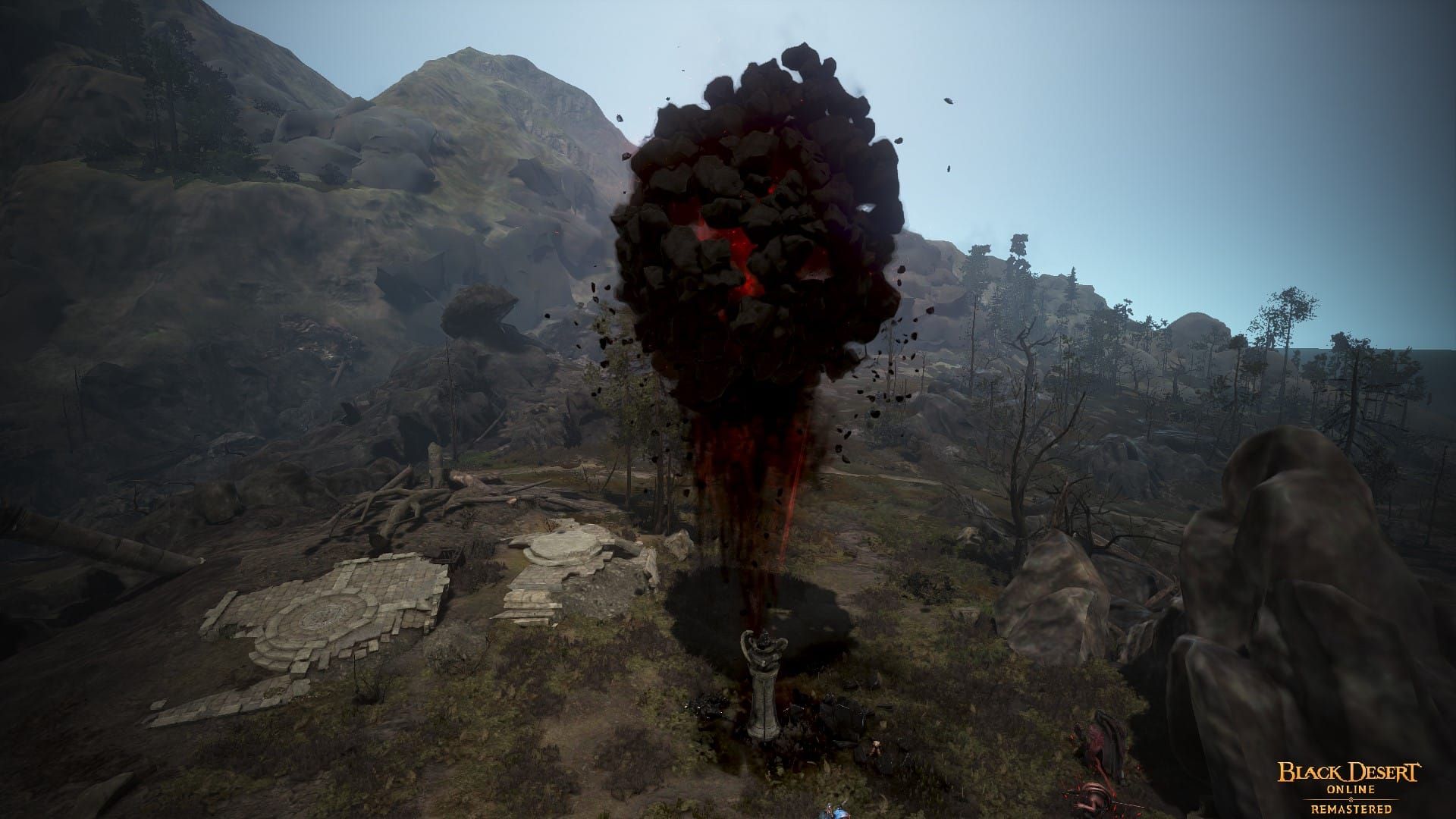 Players with at least 341 DP might try grinding a recently added spot called – Vessels of Inquisition. Once you attack the pillar, monsters will start spawning around it and try to destroy the pillar. It will flash red indicating low health. After it gets destroyed you will need to wait 2 minutes for it to respawn. You can expect around 5,000 Trash Loot per Hour at this spot with just Blue Loot Scroll. It is lower than at Main, but at least you won’t be bothered with proper grouping.

Randomly you will see Unstable Star Debris appearing from nowhere, you can use it here to your advantage as described above.

The mobs might look the same, but do not let Apostles of Immorality (big guys) surround you. They can easily oneshot you if their attacks are synchronized. Beware of back attacks!

Ranged type of mobs – [Sin-filled] Harbinger of Defilement will appear around Vessel and throw spear from the distance at you or the tower. They were added to prevent players from standing in one place. Now you will be forced to move around more often. Spear throwers have very low HP and are easily defeated in 1-2 skills. 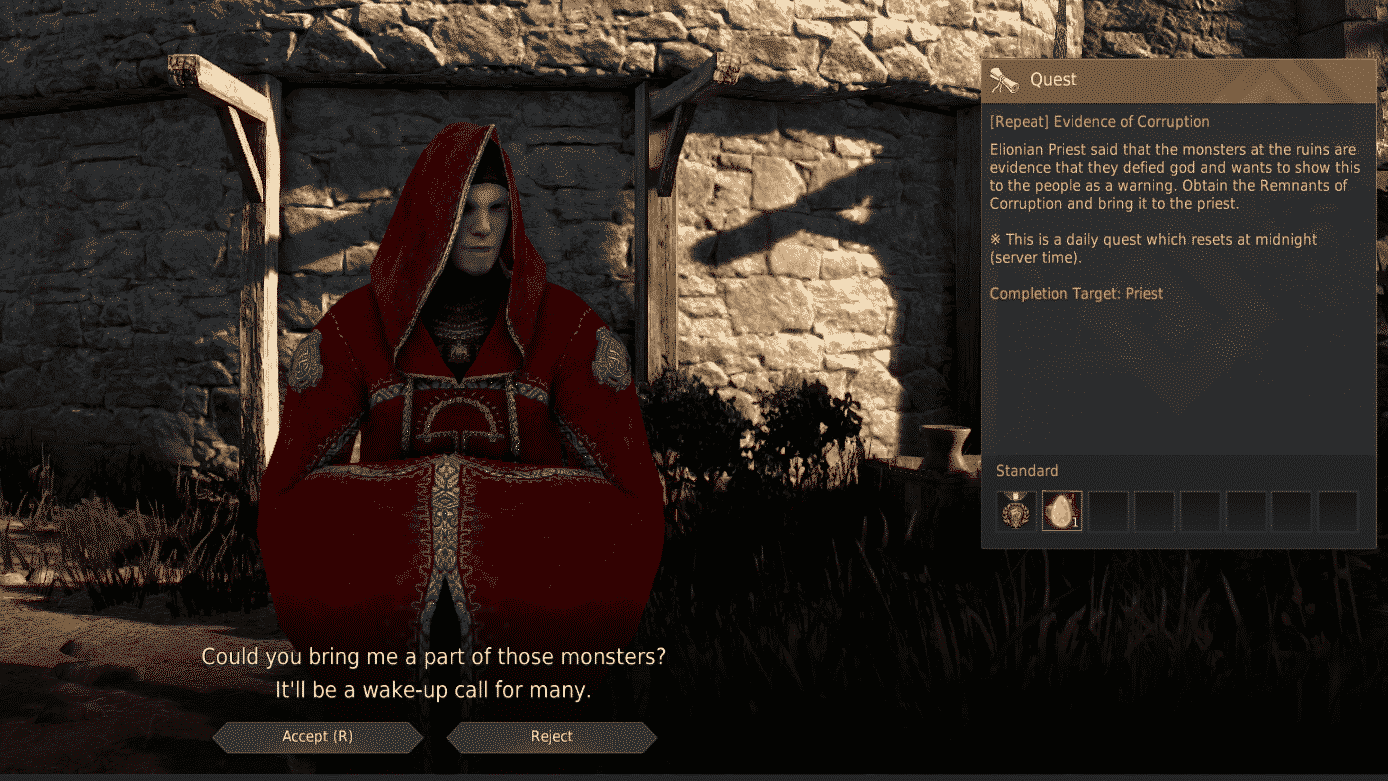 There are 2 relevant Daily Quests relating to Star’s End at Calpheon Northwestern Outpost. Speak to Elionian Priestess to receive [Repeat] Evidence of Corruption Quest that rewards you with a Caphras Stone. 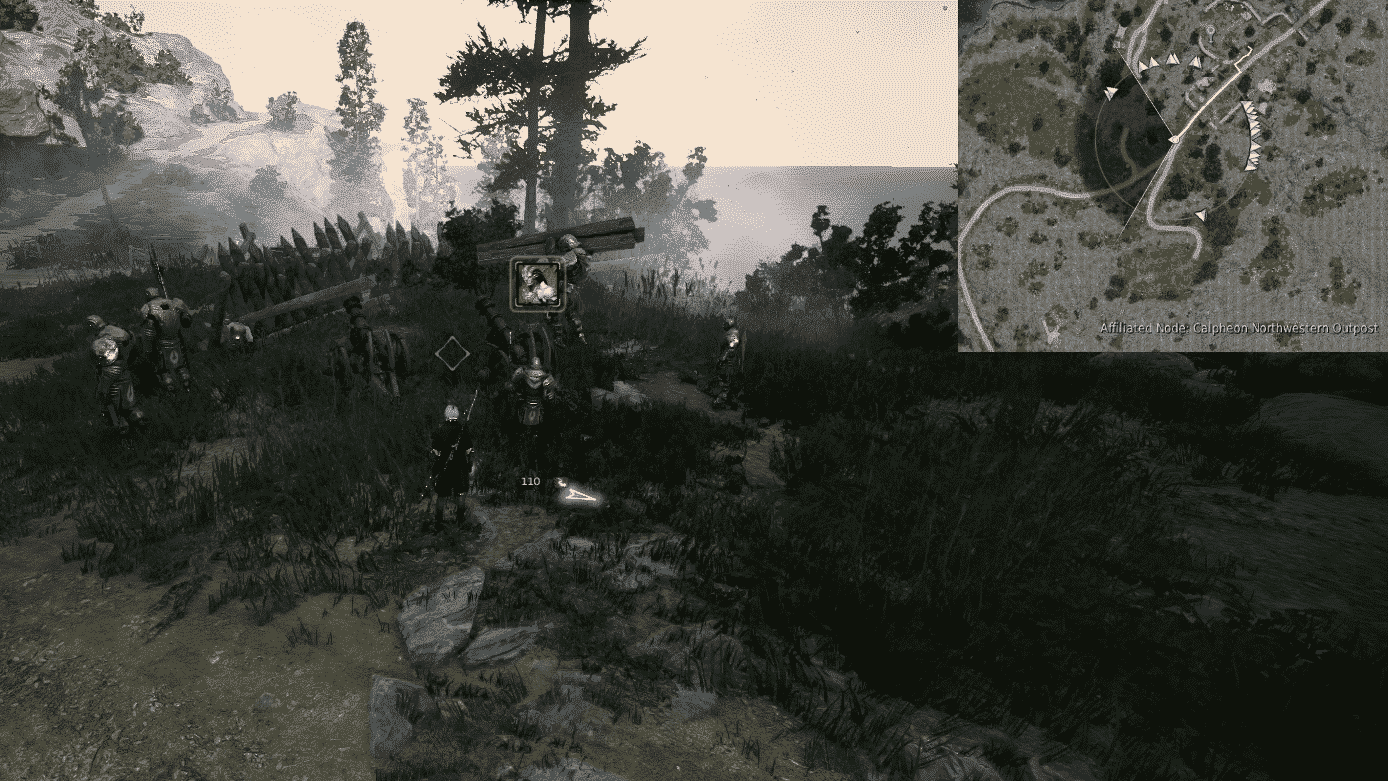 At the South West exit of Calpheon Northwestern Outpost you will meet a Soldier and can take [Repeat] Stenchful Frontline Quest, which will reward you with an item exchangeable for Mass of Pure Magic.

The answer to that question comes to personal preference, I will just present you with the data. Comparing 2 hours of Blue and 1 hour Yellow Loot Scroll, you will have ~33% more trash amount by grinding  2 hours with Blue.

Use the Yellow Loot Scroll, if you are fine with giving up a third, but grinding 1 hour less.

If you are running low on Loot Scrolls or have more free time, use the Blue Loot Scroll.

It is a known fact that in Black Desert decimal places of trash number get rounded down. (That is the reason Blue Loot Scroll does not affect drop amount at Mirumok Ruins!)

As you can see, Agris and Yellow LS will get rounded down to x3, x7, x10 instead of x3.5, x7, x10.5. Obviously, it is better to use Agris and Blue LS due to odd numbers appearing more often in the loot table. 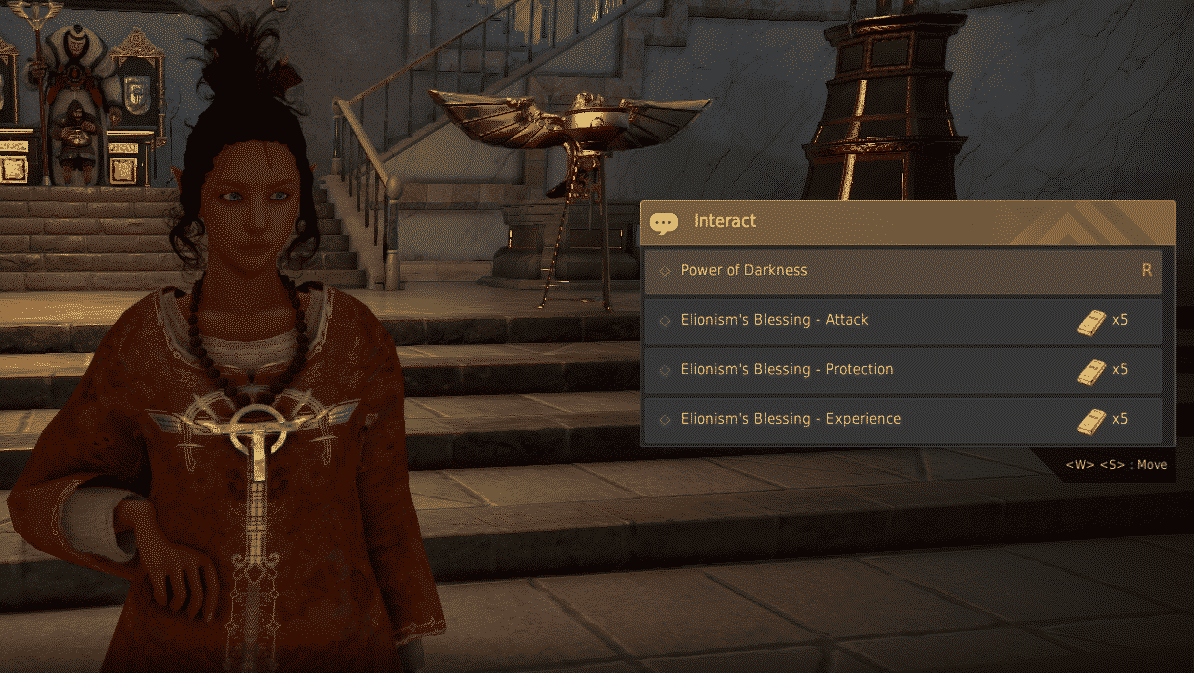 You can get the Church Buff in Calpheon by talking to the NPC Leona and exchanging 5x Gold Bar 1G (~500k Silver) for the following buffs which are rolled randomly and stay on you for 2 hours:

Simple Cron Meal is what you wanna go for, because of its Monster Damage. If you feel like you lack Accuracy and Duel for the spot frequently use Exquisite Cron Meal.

While Draughts and normal Elixirs don’t stack, you can stack a Perfume with either of them:

Spirit Perfume Elixir is the best in slot Elixir. You will never run out of the secondary resource and your Critical Hit Rate will hit the maximum amount. There is no reason not to use it. Although, if you still feel yourself squishy and have some Event versions of Khalk’s Elixir laying around it is a viable option as well.

Frenzy Draught is generally the best choice for any class, it offers everything you need for Star’s End, except tankiness. For the lack of later, consider substituting it with Beast’s Draught, which also is a cheaper option.

To make the maximum use of Star’s End specific knockdown mechanic we can run Elixirs instead of Draughts, since the latter doesn’t offer Down Attack damage modifier. In general it is better to use Elixirs, but not always convenient. Note that Elixirs and Draughts do not stack with each other.

The only buff I will recommend is Master’s Stuffed Black Leopard Head: 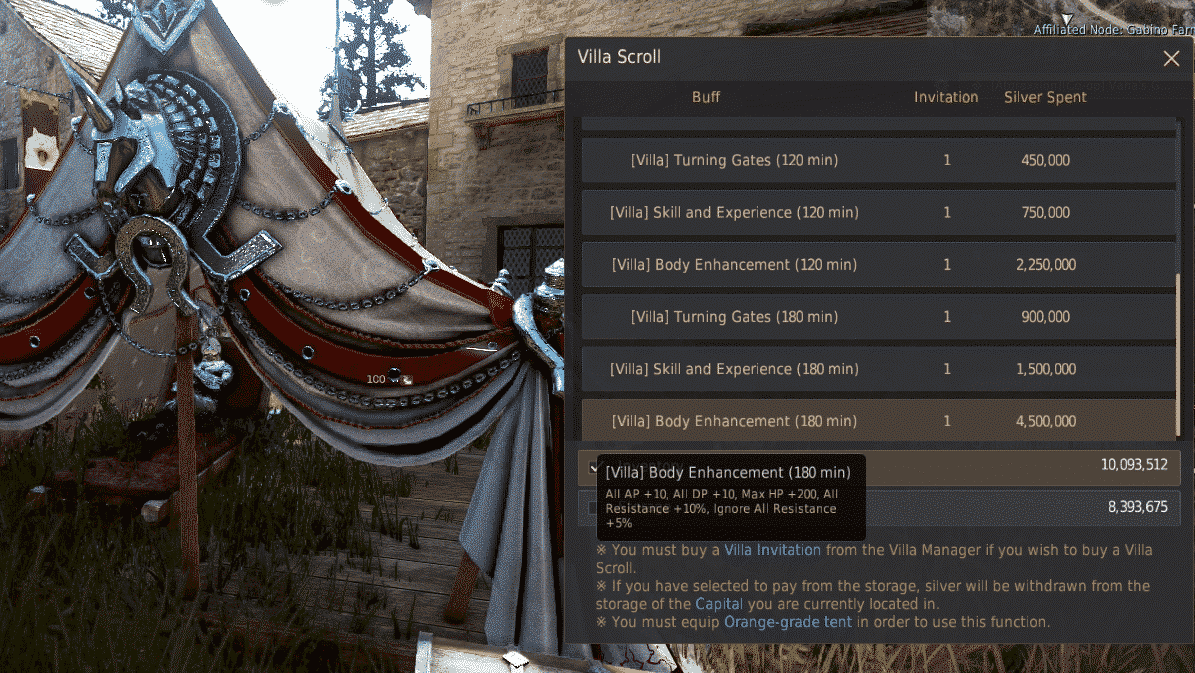 Make sure that you have a valid Villa Invitation (7 Days) in your inventory, or the Pearl Shop Item – Secret Book of Old Moon active:

In summary that’s how your buffs will look like:

Check the grinding videos below for your specific class, and try to mimic the pulling and skill rotations: