ESO Plus Worth It?

There are 10 different races in The Elder Scrolls Online, split in 3 alliances that constantly fight over Tamriel. We are taking a look at all the racial passives / traits, as well as their lore.

The Elder Scrolls Online is staying loyal to the Elder Scrolls lore with its races, splitting them in three separate alliances that fight for dominion over Cyrodiil – a huge open world PvP / siege map. Lore aside, each one has its own racial skills / traits / passives, so if you are looking to take full advantage of your race, or you are unsure on which one to pick, just bookmark this guide.

Choosing your race is an important decision that is going to stick with you (unless you pay to change it – limited in your alliance’s races only), that’s why we think knowing each one’s lore & racial skills is essential to help you choose!

The Daggerfall Covenant uses white and blue as their banner colors, and a lion as their crest. Their starting location is Stros M’Kai in Hammerfell.

Established in 2E 567, the Daggerfall Covenant was a treaty made by the kingdoms of High Rock, and their main goal was to end the poverty and suffering the region faced.

High King Emeric is responsible for uniting Bretons, Redguards and Orcs, and he is residing in Daggerfall Covenant’s capital, Wayrest in Stormhaven. 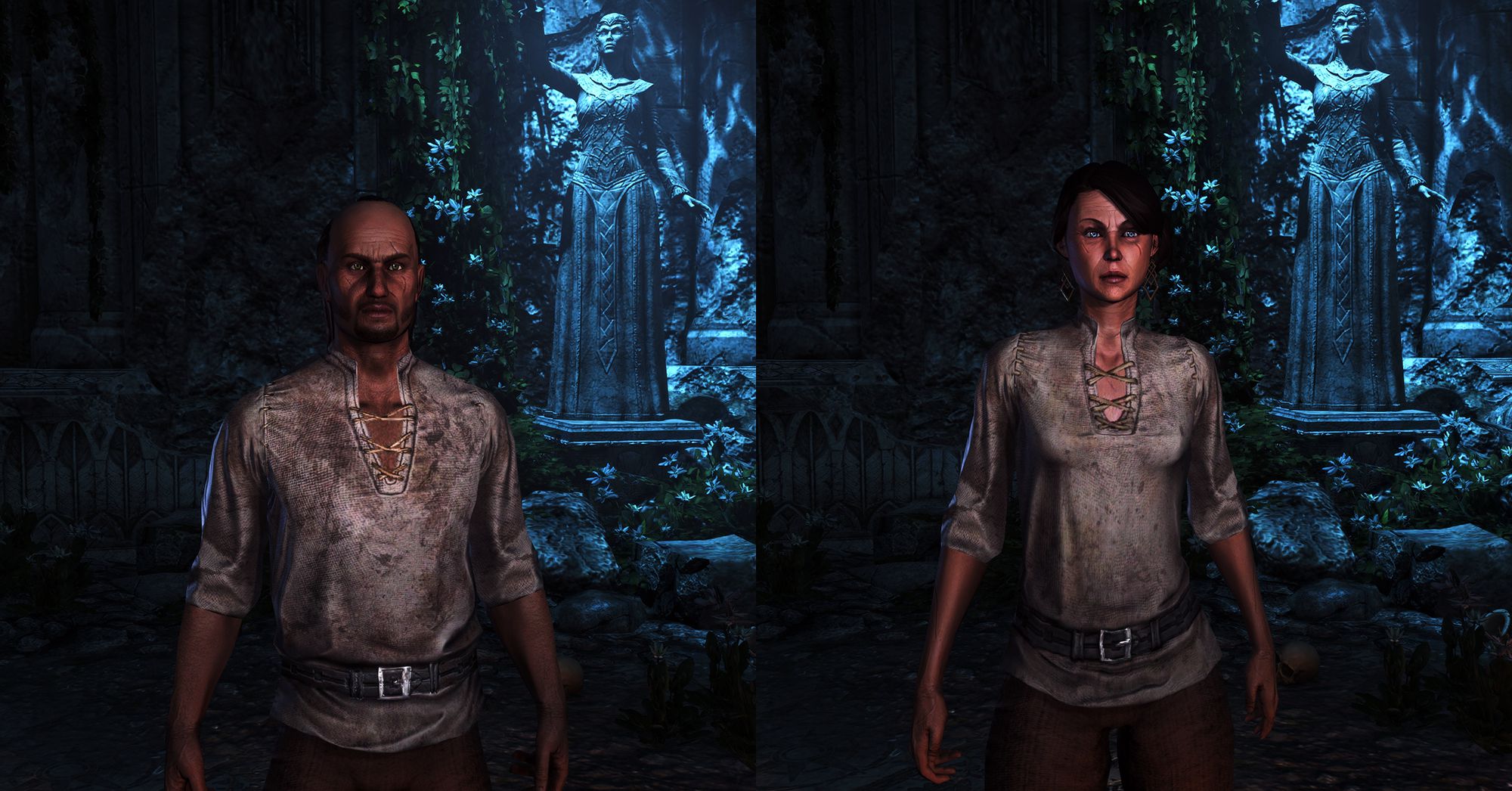 Race Description: The racial skills of the Bretons reflect their affinity for the arcane, increasing their base magicka, magicka recovery, light armor, alliance point gain, spell resistance, and cost reduction of spells; allowing them to cast spells with little pause.

Breton Lore: The men and women of High Rock were once ruled by High Elf overlords. Some Elven blood still runs in their veins, giving Bretons an innate grasp of magic that distinguishes them from the other human races. Passionate and flamboyant, intelligent and resourceful, the Bretons are renowned and talented craftsmen, shrewd merchants, gallant cavaliers, and inventive wizards. They can also be proud and quarrelsome. Tales of warfare between the kingdoms of High Rock account for much of their history, but most revere the Eight Divines and value prosperity over glory. 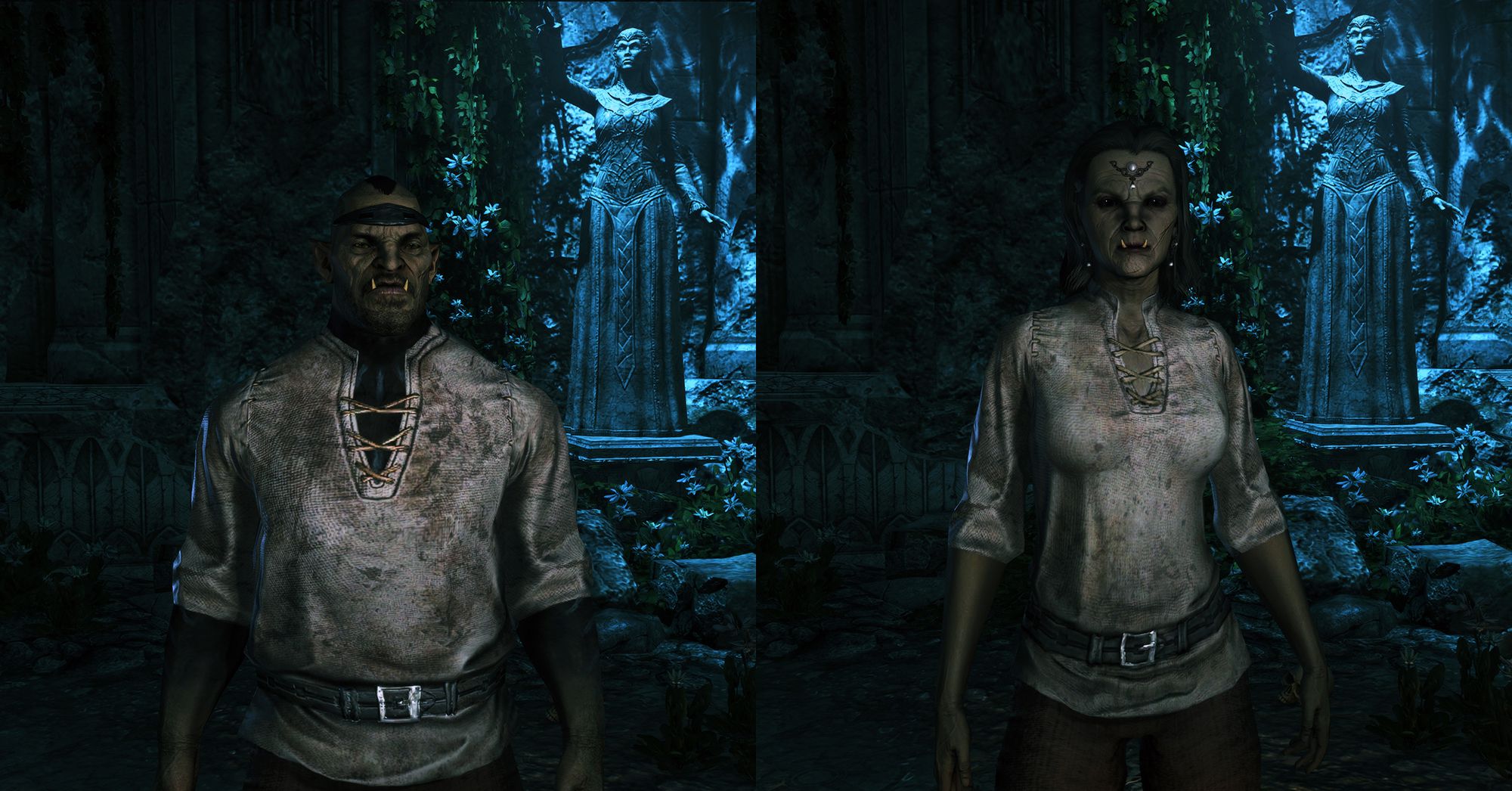 Race Description: The racial skills of the Orcs reflect their people’s harsh mountain environment, giving them bonuses to heavy armor use, sprinting, weapon damage, inspiration gain, weapon proficiency, as well as base health and stamina.

Orsimer Lore: Though other races often regard the Orcs as barbarians and even beasts, these noble warriors have an ancient culture forged from endless warfare in their harsh mountain homelands. Orcs live under a simple code of honor by which the strong survive and the strongest rule. As the greatest smiths in Tamriel, their weapons and armor are prized by warriors everywhere. During the reign of the Second Empire, when their kingdom of Orsinium was finally granted provincial status, its restoration helped solidify their devotion to the new Daggerfall Covenant. 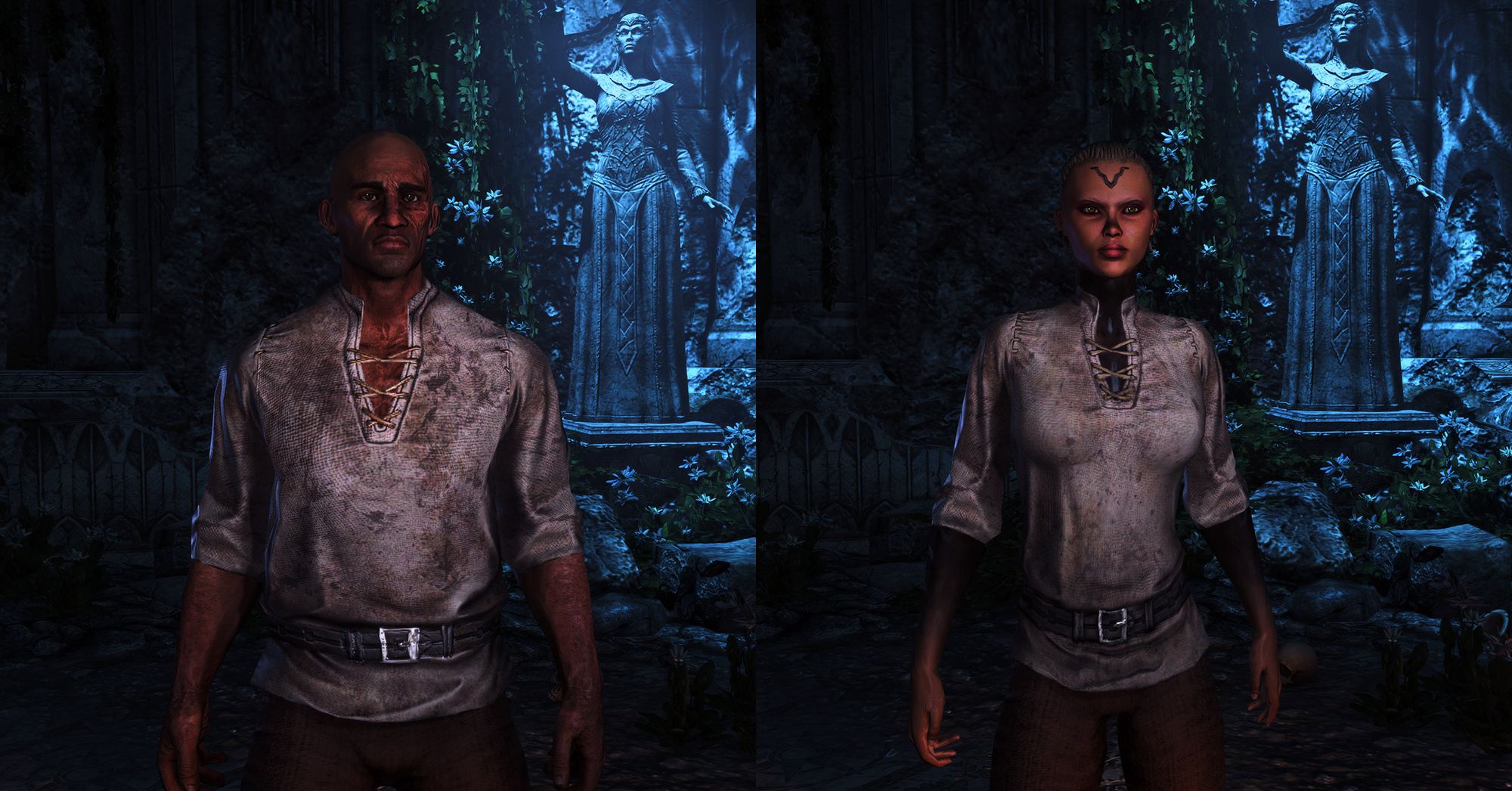 Race Description: The racial skills of the Redguards reflect their ancestral legacy as sword masters, giving them bonuses to shields, base stamina, stamina recovery, movement, and duration of effects from food. Their ability to flow in martial combat is unparalleled.

Redguard Lore: The Redguards of Hammerfell are talented and athletic warriors, born to battle. A desert people, their ancestors migrated to Tamriel from the lost continent of Yokuda. Their culture is based on preserving ancient traditions and defying their harsh environment. They prize honor and dignity above all else, combining a deep reverence for the divine with a suspicion of all things magical. Their capital is the merchant port of Sentinel, but their roots are deep in the sands of the Alik’r Desert. In their youth, Redguards endure a rite of passage in the desolate wastes of Alik’r as a test of endurance and discipline. Only the strongest survive.

The Aldmeri Dominion uses silver and yellow as their banner colors, and an eagle as their crest. Their starting location is Khenarthi’s Roost, south of Elsweyr.

Established between 2E 580 and 2E 582, the Aldmeri Dominion was an initiative of the Altmer, aiming to protect Nirn from the disaster that younger races would bring.

Queen Ayrenn is responsible for uniting Altmer, Bosmer and Khajiit, and she is residing in Aldmeri Dominion’s capital, Elden Root in Grahtwood. 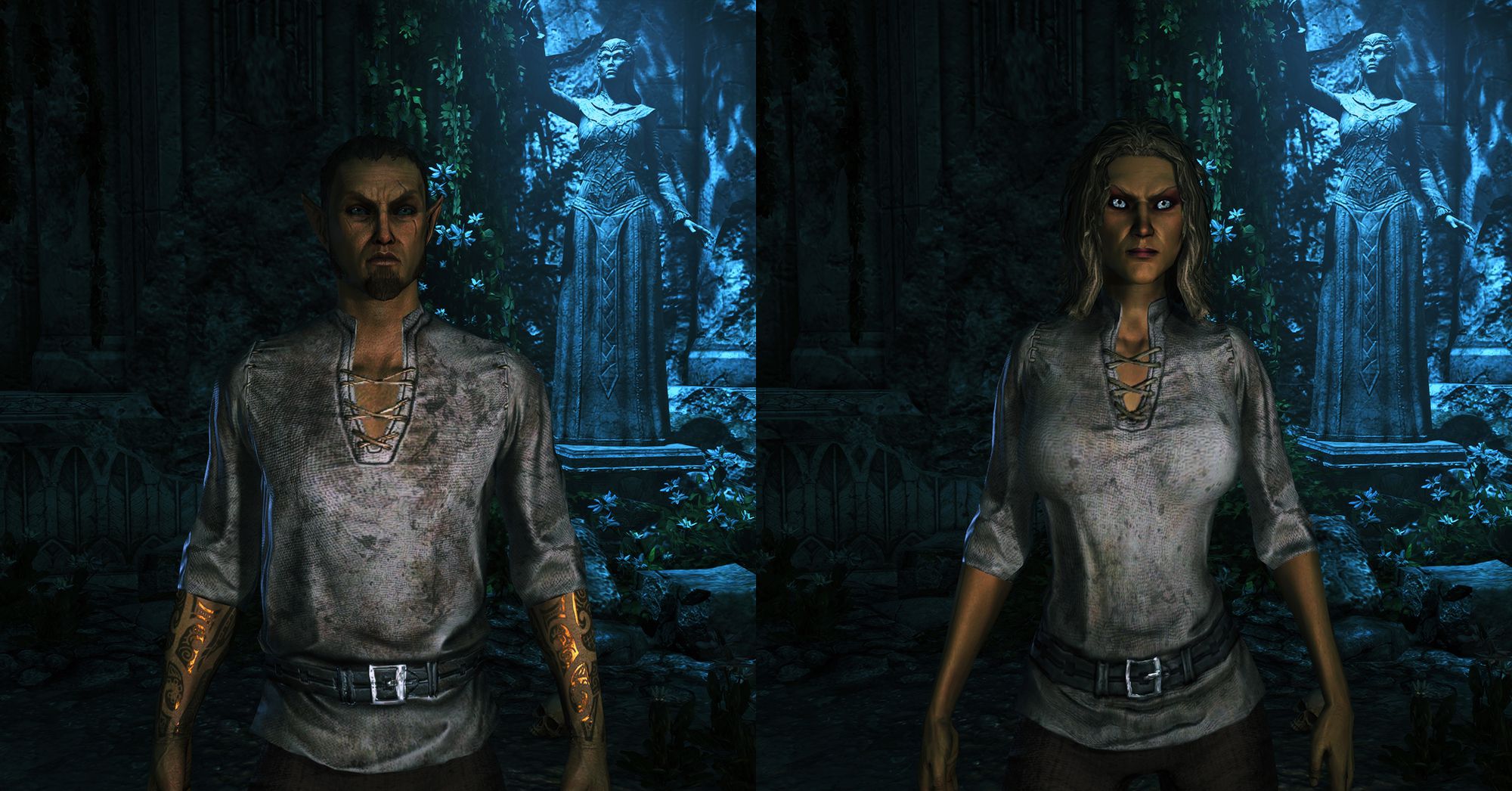 Race Description: The racial skills of the High Elves reflect their magical affinity by increasing their spell damage, resource recovery, base magicka, and experience gain. These innate bonuses help define the race as proud and powerful spell casters.

Altmer Lore: The High Elves, or Altmer, arrived in Tamriel thousands of years ago from Old Aldmeris. They see themselves, perhaps justifiably, as the ruling race of Tamriel. They are a highly cultured people, known for their breathtaking architecture and massive libraries of histories and creative works. They tend to be isolationists, largely remaining on Summerset Isle, and only emerge when they perceive a great threat to their homeland. They are powerful mages and warriors, and the de facto leaders of the Aldmeri Dominion. 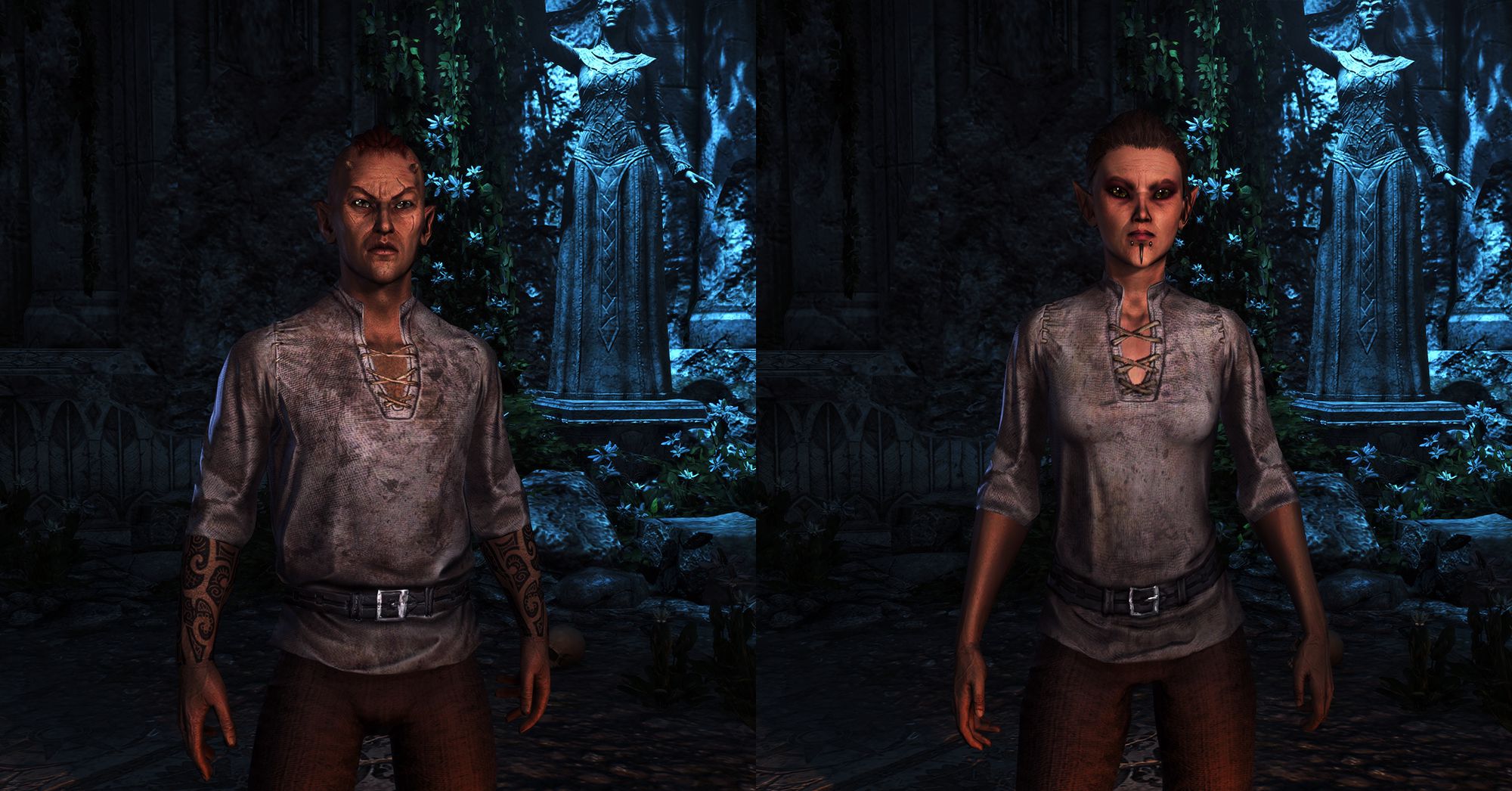 Bosmer Lore: The Wood Elves, or Bosmer, are mischievous, curious and nimble. Because their homeland of Valenwood is often attacked by the Colovian Imperials, Wood Elves are experts at the art of defense. They are also gifted archers, perhaps the best in all of Tamriel. The capital of the Aldmeri Dominion, Elden Root, lies in the heart of their homeland. It has evolved into a center of political and cultural importance and is of vital strategic importance in the battle to control Tamriel. 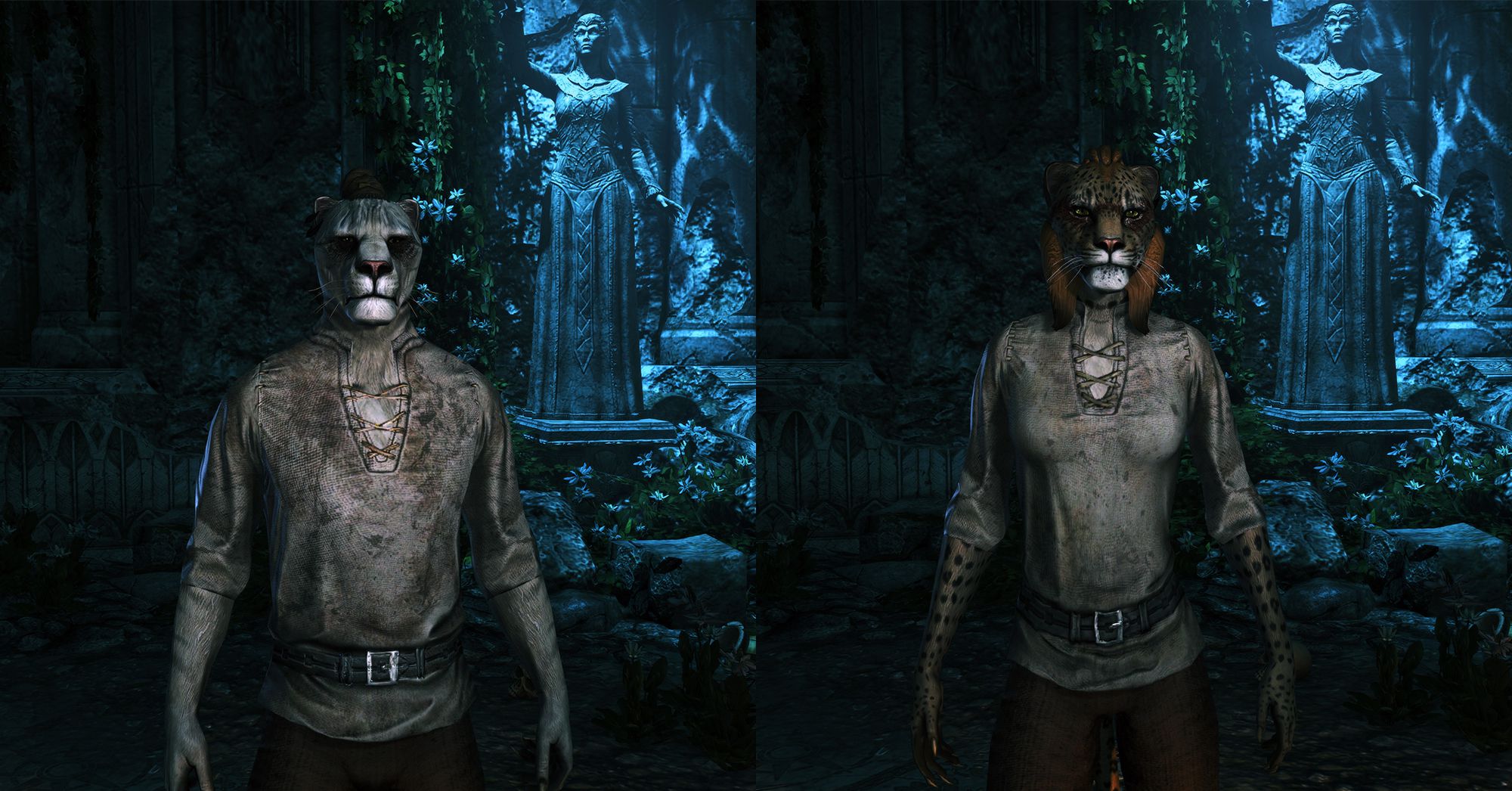 Race Description: The racial skills of the feline Khajiit reflect their natural versatility and guile, giving them bonuses to pickpocketing, stealth, resource recovery, as well as base health, magicka and stamina. These bonuses help them thrive in many ventures of life.

Khajiit Lore: The population of the proud feline Khajiit has dwindled in recent years following a devastating outbreak of Knahaten Flu. They owe a great debt to Ayrenn, Queen of the High Elves, for her help in restoring order from the chaos that followed the plague. They have a wry wit and a hedonistic outlook, but they are fearsome on the field of battle. They are the strong arm of the Aldmeri Dominion.

The Ebonheart Pact uses black and red as their banner colors, and a dragon as their crest. Their starting location is Bleakrock Isle in Skyrim.

Established in 2E 572, the Ebonheart Pact is an unstable, yet powerful military alliance between Skyrim, Morrowind and Black Marsh, formed during the events of the Second Akaviri Invasion.

High King Jorunn is responsible for uniting Argonians, Dunmer and Nords, and he is residing in Ebonheart Pact’s capital, Mournhold in Deshaan. 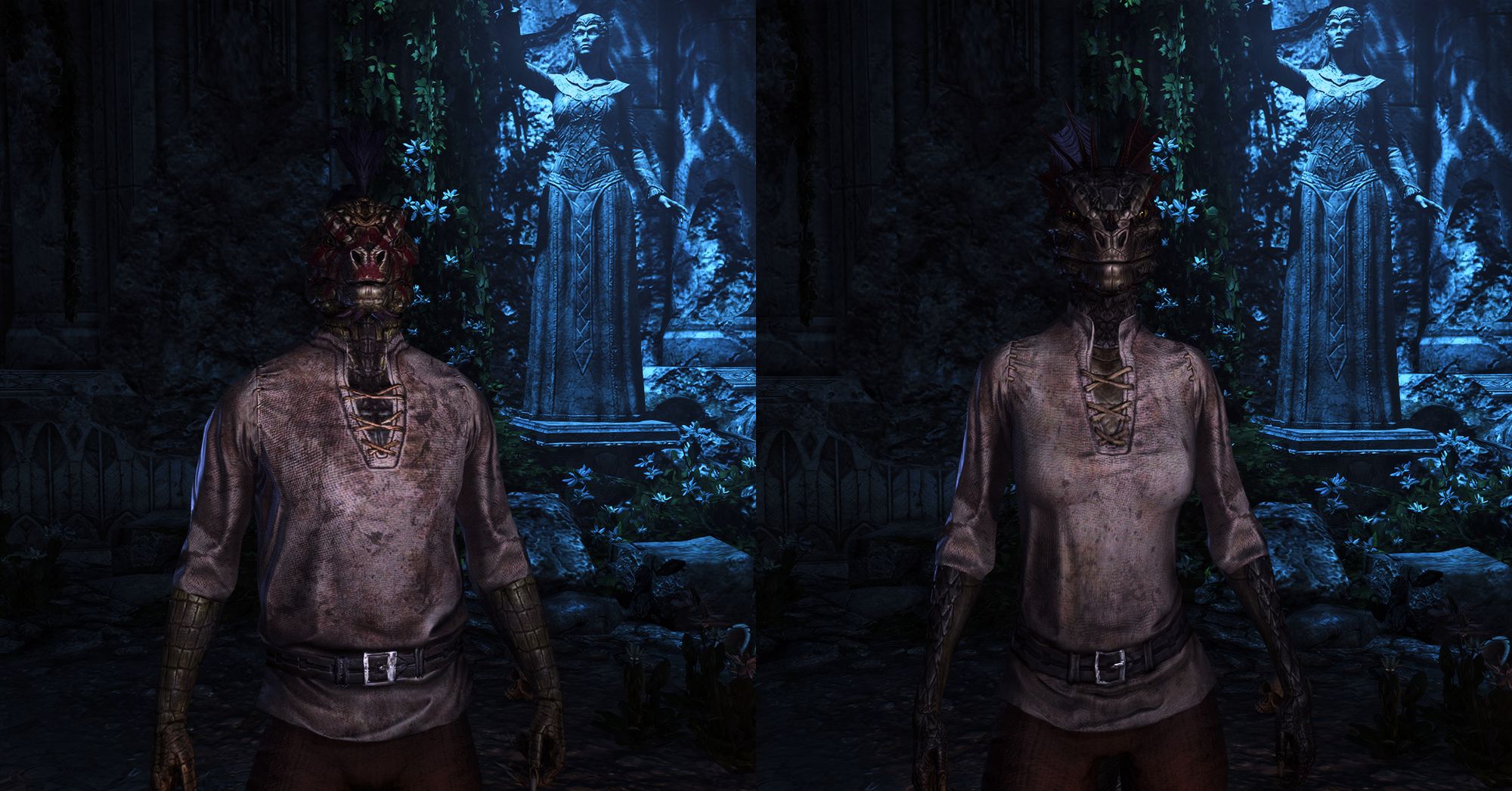 Argonian Lore: The Argonians are possessive of a cool intellect, and are well-versed in the magical arts, stealth, and the use of blades. They are also guerrilla warfare experts, long accustomed to defending their borders from invaders. They often serve as the scouts and skirmishers for the forces of the Pact. 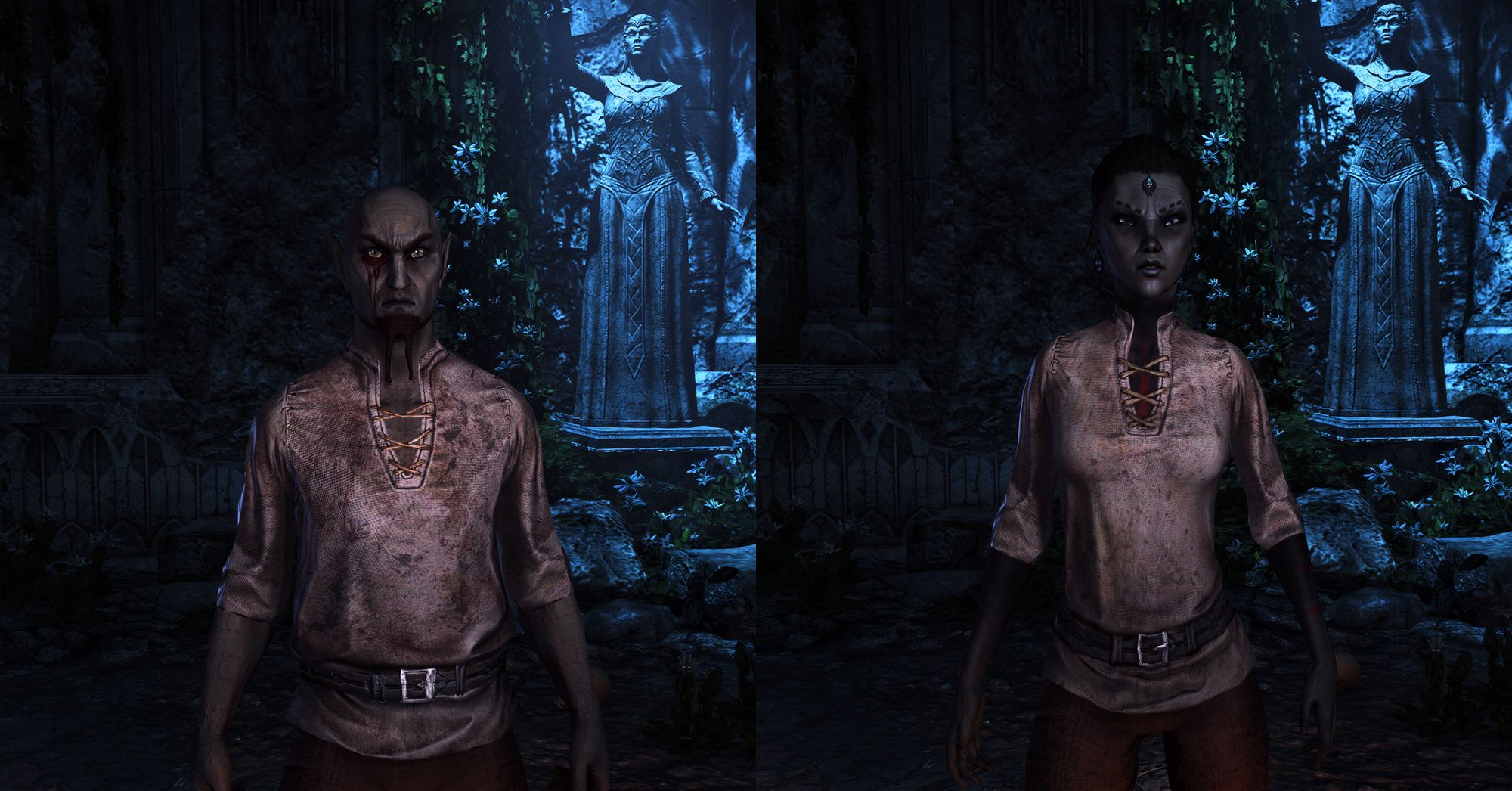 Race Description: The racial skills of the Dark Elves reflect their intellect and agility, giving them bonuses in dual wielding, flame and lava resistance, weapon and spell Damage, and base magicka and stamina. These bonuses allow them to adapt to anything.

Dunmer Lore: The Dark Elf homeland of Morrowind has been invaded many times by the Akaviri and the Nords. This history of conflict has transformed the Dunmer into hardened warriors. They also have a natural affinity for magic and great intellect, making them skillful sorcerers. 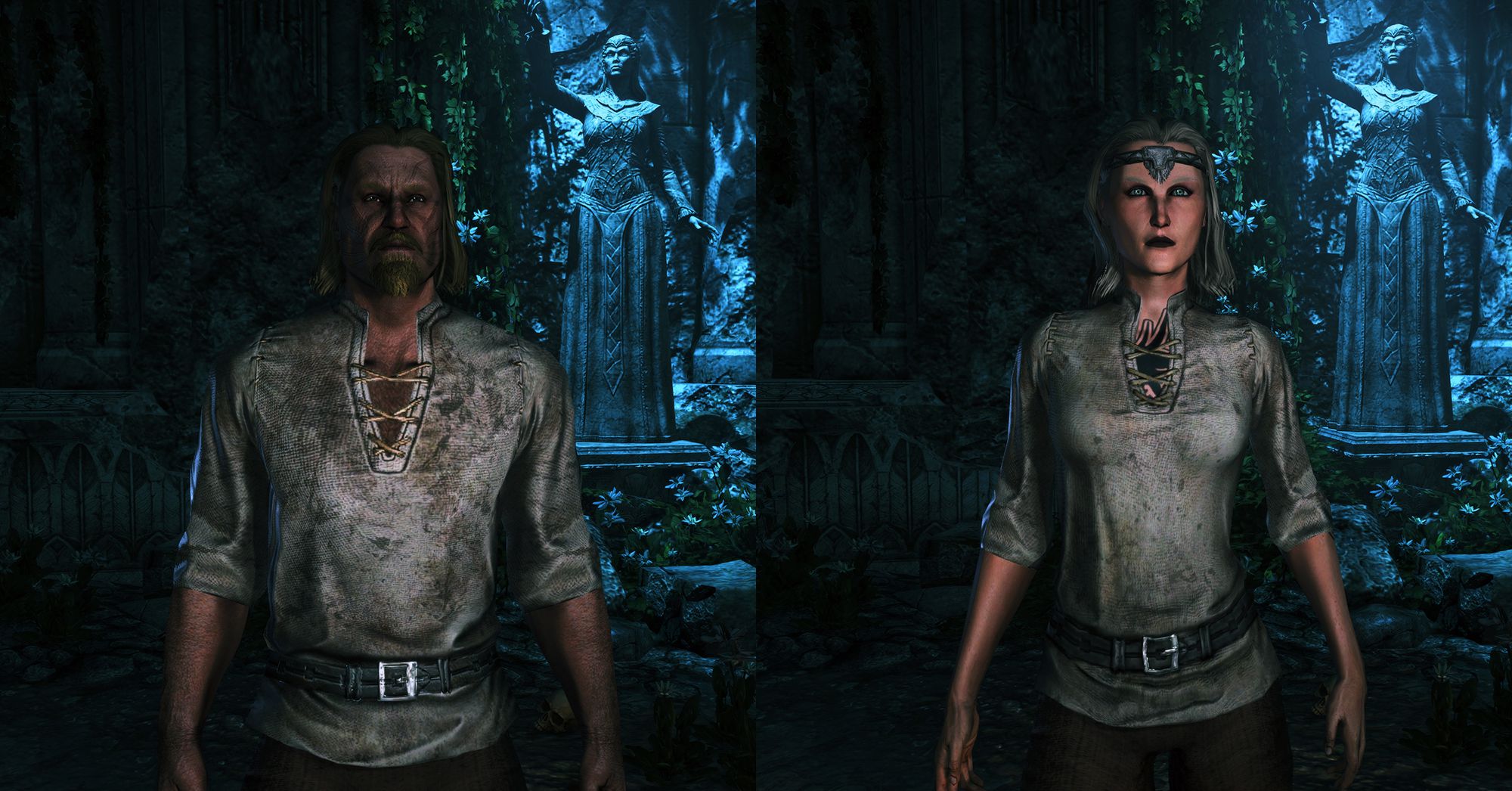 Race Description: The racial skills of the Nords reflect their strong and hardy natures, giving them bonuses to two-handed weapon use, duration of effects from drinks, physical, spell, and frost resistance, ultimate generation, as well as base health and stamina.

Nord Lore: The Nords once conquered most of Tamriel, and as a result, feel a certain entitlement to rule. They broke the power of the Ayleids, nearly drove the High Elves out of High Rock, and conquered much of Resdayn, the precursor to Morrowind. The Nords are excellent with arms. They are quick to anger, boisterous, and strong. They are natural-born warriors who fight with an ecstatic ferocity that terrifies their enemies.

Last but not least, the Imperials (acquired from the Imperial Edition of the game, or the crown store) pledge allegiance to no one.

They are Cyrodiils, and live amidst the war of the Three Banners, therefore they can choose to join any alliance they see fit. 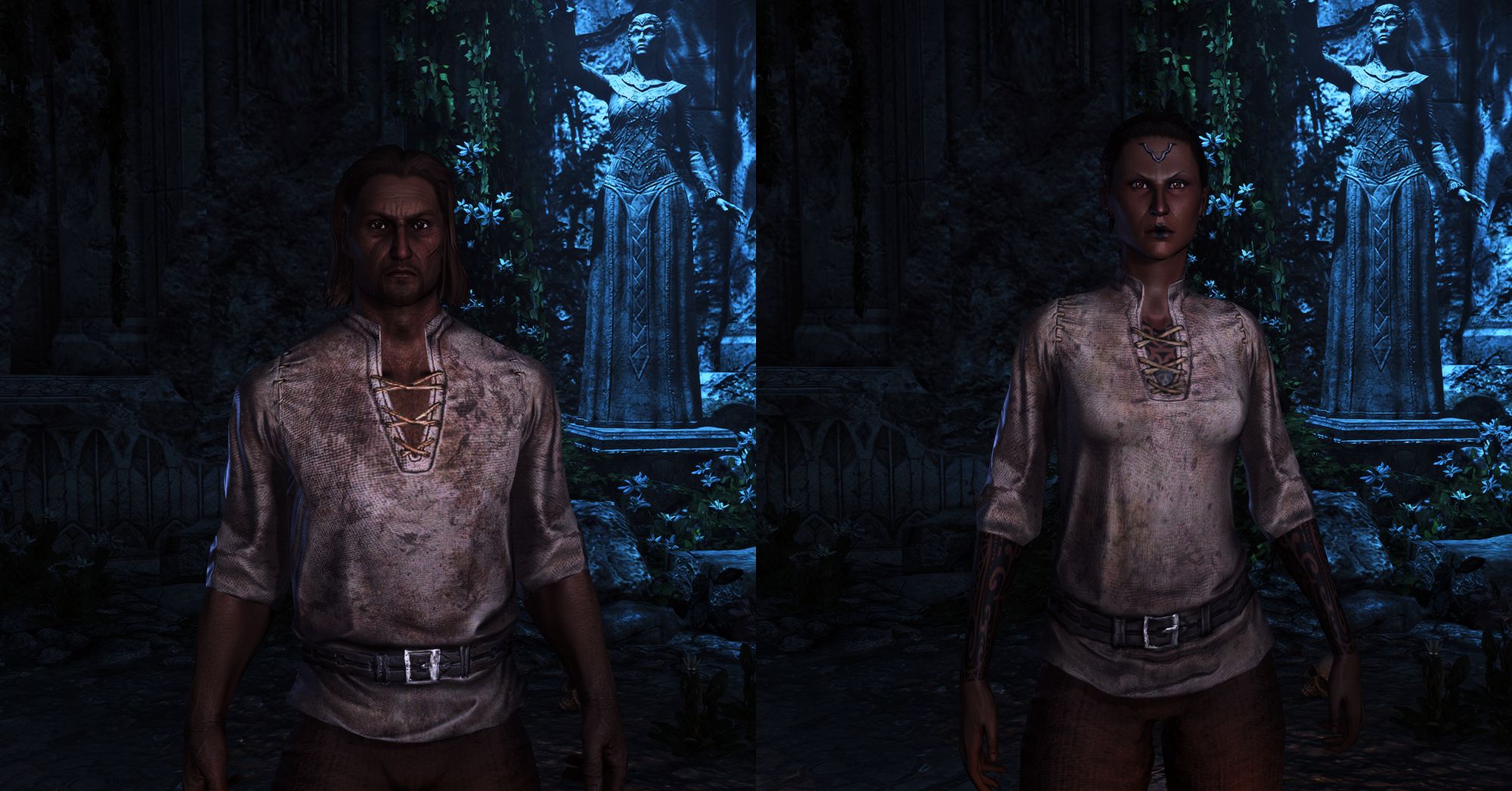 Race Description: The racial skills of the Imperials reflect their combat training and perseverance in battle, giving them bonuses to gold drop rates, shield proficiency, base health and stamina, and resource recovery when fighting back to make them resolute fighters.

Imperial Lore: Also known as Cyrodiils, Cyrodilics, Cyro-Nordics and Imperial Cyrods, the well-educated and well-spoken Imperials are the natives of the civilized, cosmopolitan province of Cyrodiil. Imperials are also known for the discipline and training of their citizen armies, and their respect for the rule of law. Though physically less imposing than the other races, the Imperials have proved to be shrewd diplomats and traders, and these traits, along with their remarkable skill and training as light infantry, have enabled them to subdue all the other nations and races and erect the monument to peace and prosperity that comprises the Glorious Empire. Their hegemony has waxed and waned throughout the eras, and most historians refer to three distinct Empires, the ends of which each mark a new epoch in Tamrielic history.

Any Race / Any Alliance Crown Item – Worth It? 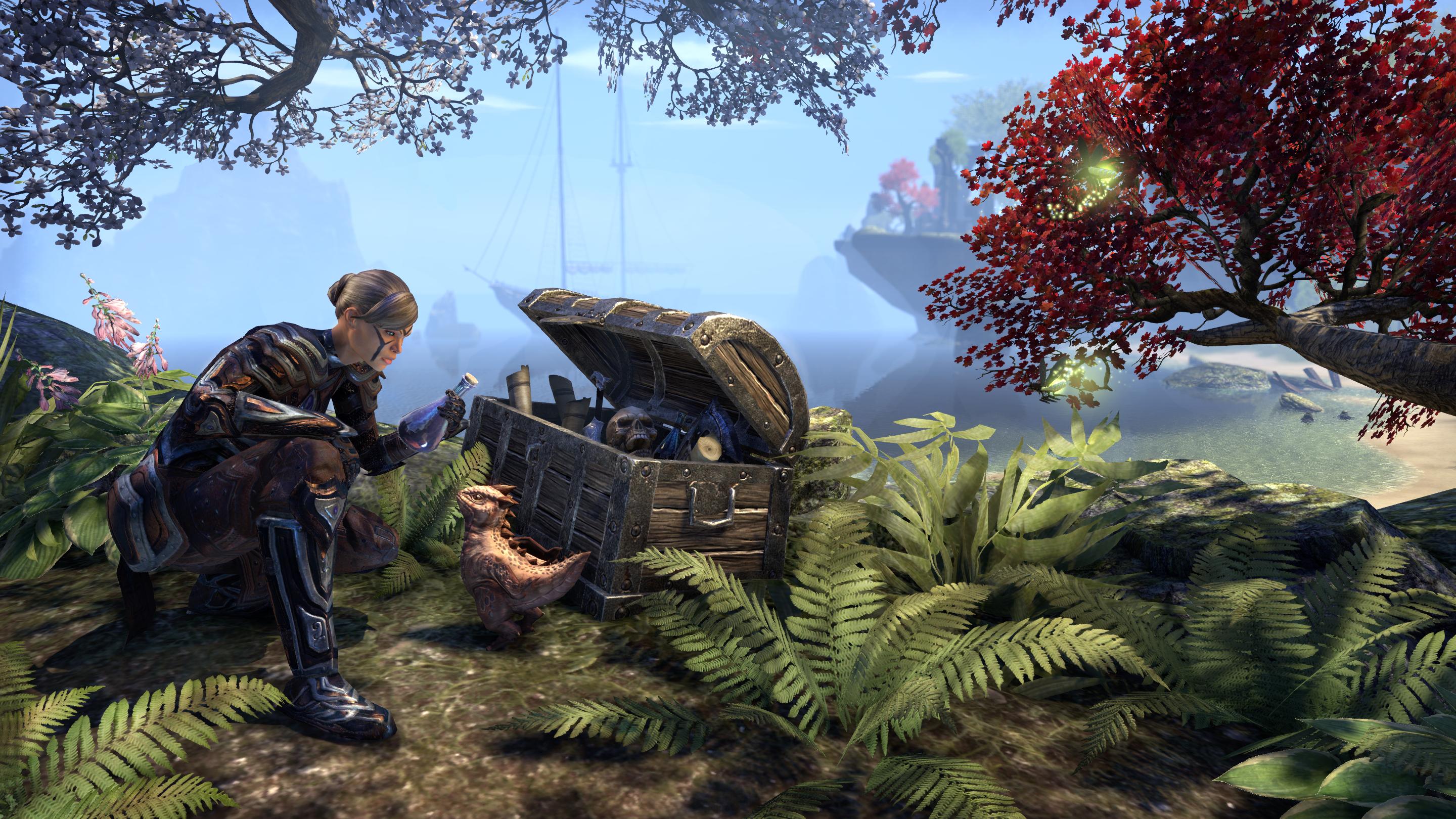 There is an item in the Crown Store, called Adventurer Pack (in the Upgrades section), which costs 1.900 Crowns, and along with a few treasure packs, you get the amazing ability to choose the Alliance you want for your favorite race, and be able to join your friends or vice versa.

The only downside you should be aware of, is that it works only for new characters, so there is absolutely no way to change the alliance of an existing character. Keep in mind also, that if you use a Race Change coupon, you will also be restricted into changing your race within the character’s alliance, even if you created him after getting the Any Race, Any Alliance upgrade.