The Lord of the Rings Online Classes

Classes in The Lord of the Rings Online satisfy most MMORPG archetypes, while staying true to the LOTR lore! There’s a lot of variety to satisfy all trinity roles (Tank / DPS / Healer), and each one’s abilities are quite distinctive and unique.

Hopefully there is no gender-lock in place, but there is a race-lock – but at least it’s lore-friendly. Before choosing your class, make sure you check out all LOTRO races as well, as each one offers different passive skills that may complement your class in different ways.

Make sure to consult the table below as well, to quickly identify all the available race / class combinations. 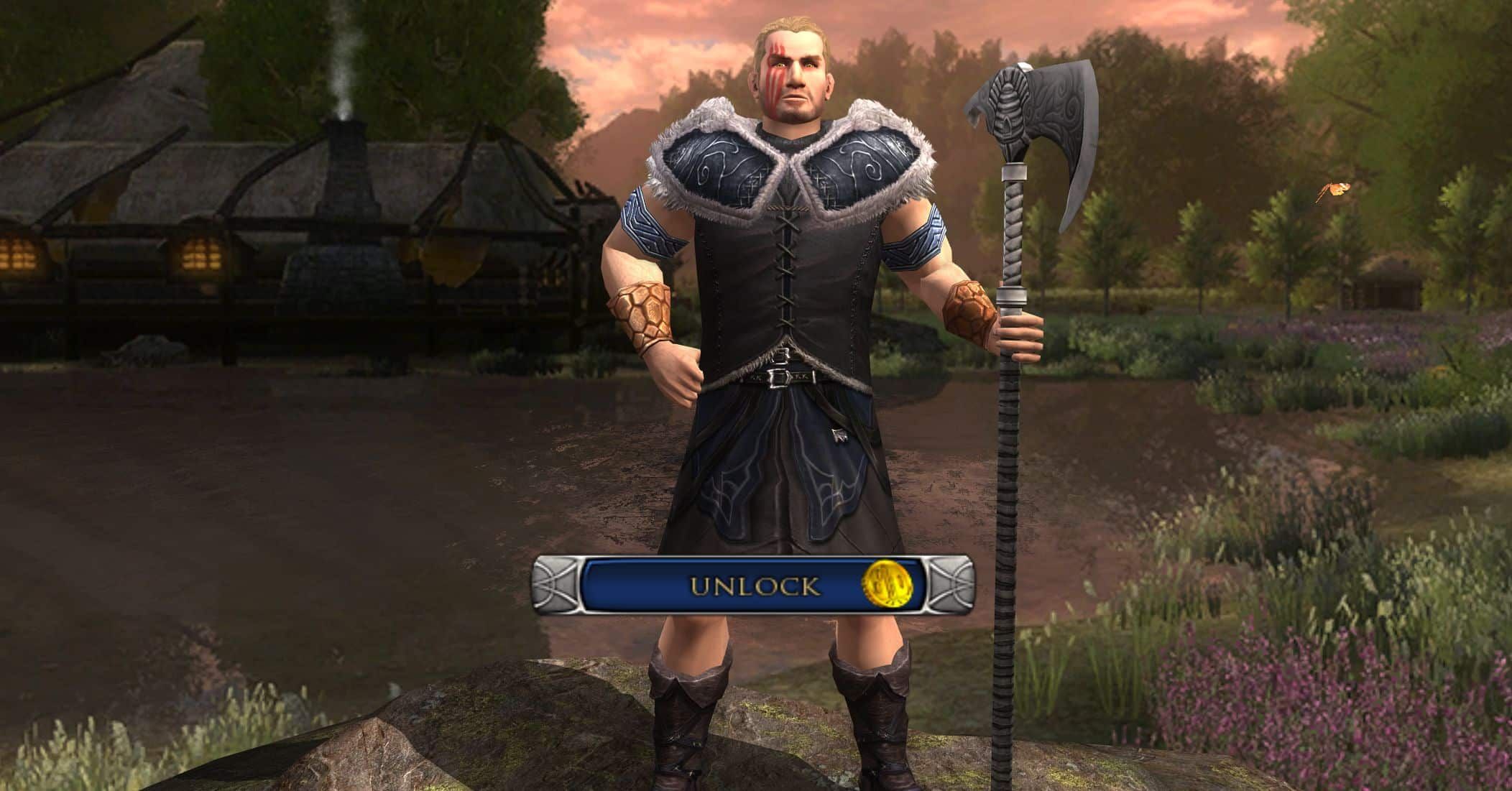 Class Difficulty: Advanced
Role: Damage / Support
Armor: Light, Medium & Heavy
Weapons: Bows, Crossbows, Daggers, Dual Wielding, One-Handed Axes, One-Handed Clubs, Spear, Two-Handed Axes, Two-Handed Clubs
Instruments: Fiddle, Horn, Lute
Lore: The Beornings of Middle- earth are a largely reclusive people. They trace their ancestry to Beorn himself and spend most of their time deep in the wilderness. The solitude of the forest gives little comfort in recent times with the enemy encroaching from all sides. The time has come for the descendants of Beorn to lend their strength to the Free Peoples of Middle-earth. This class is inspired by Beorn, who bravely stood with the Free Peoples during the Battle of Five Armies.

You can unlock Beornings by paying 1,000 LOTRO Points.

Beornings are skin- changers that can change into the form of a bear in combat. They focus their wrath while in bear form, choosing to deal grievous blows or bolster their own resolve. While skilled in combat, some Beornings also choose to wield their knowledge of the wilderness to assist their allies. 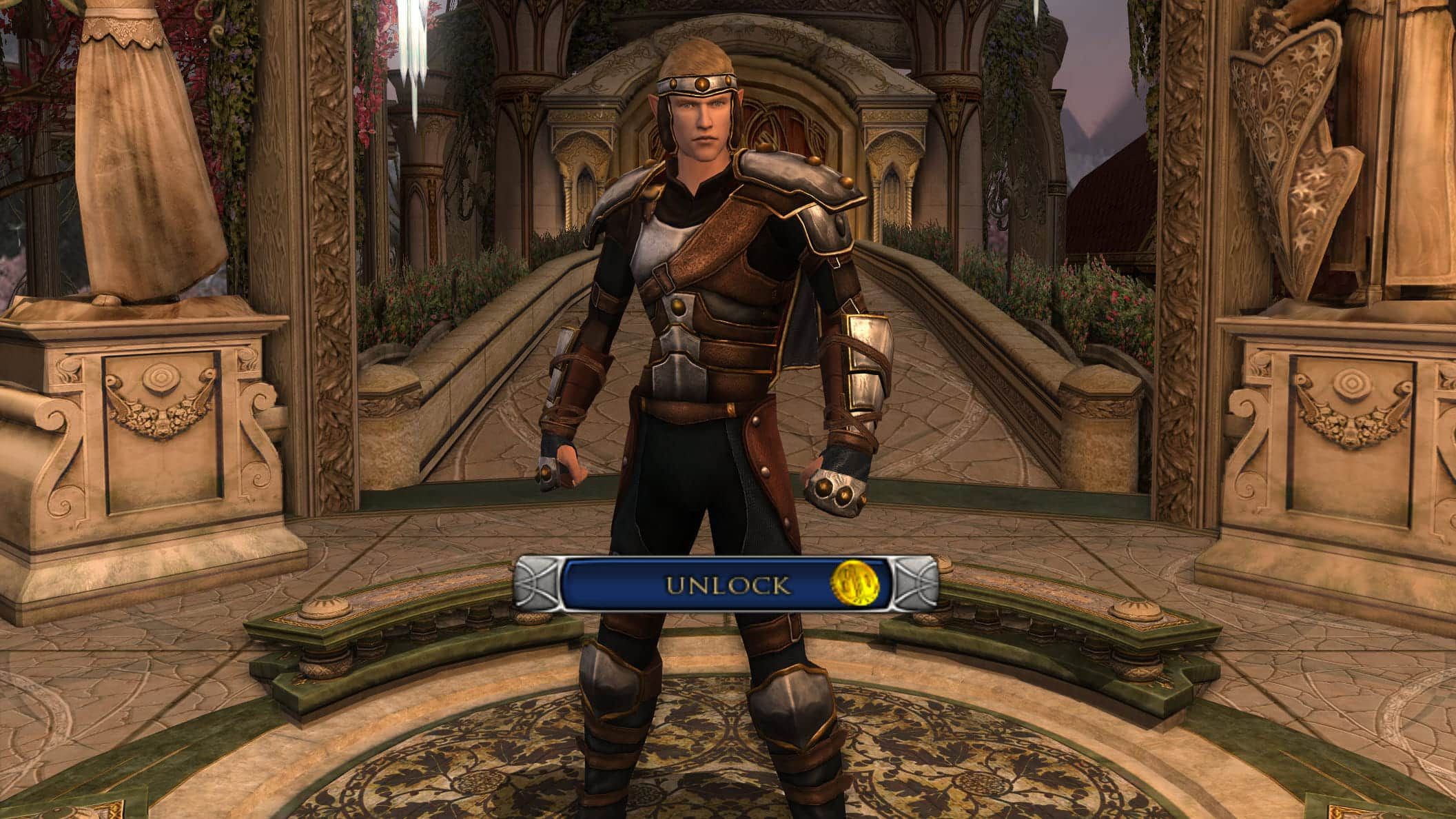 Class Difficulty: Advanced
Role: Offence / Defence
Armor: Light, Medium & Heavy
Weapons:
Instruments:
Lore: Brawlers are formidable fighters whose bold manoeuvres can topple their foes and safeguard their allies. This class is inspired by Helm Hammerhand, who to the astonishment of many, would take to the battlefield barehanded.

Brawlers are aggressive melee fighters who wield a unique resource called Mettle to maximize their damage and fuel their most powerful skills. Although their offensive capabilities truly shine in one-on-one combat, they are not without recourse when faced with multiple enemies. In fellowships, a Brawler’s abrasive nature helps them hold the ire of their foes and keep their allies safe. 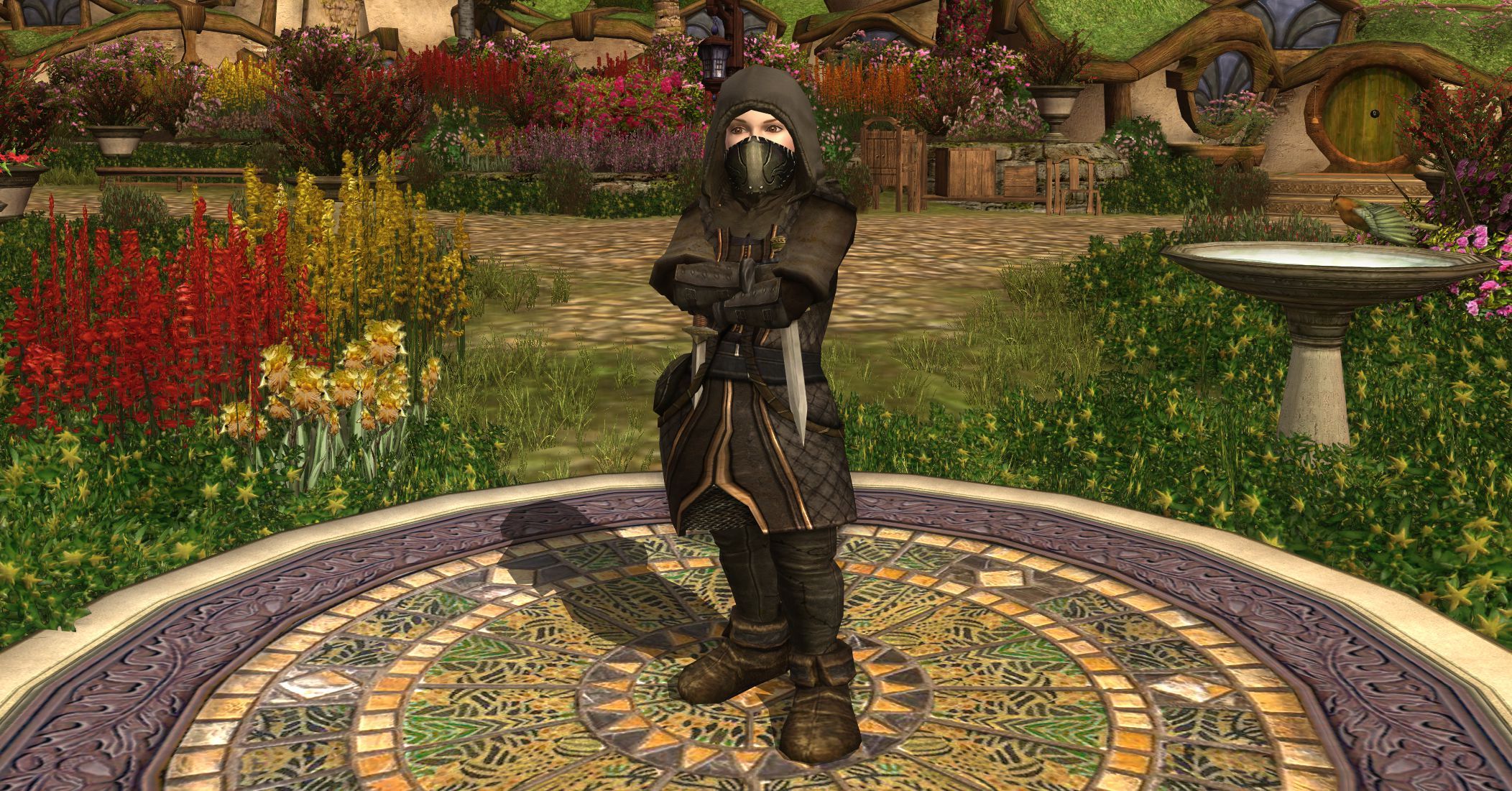 Burglars are masters of debuffing; skills that cause foes to deal less damage or be easier to kill. They utilize their Trick skills to debuff foes and can later remove the Tricks for additional benefits. Burglars also have Stealth skills and are proficient at initiating Fellowship Manoeuvres.

In fellowships, a Burglar supports his allies by debuffing foes, while dealing respectable damage. 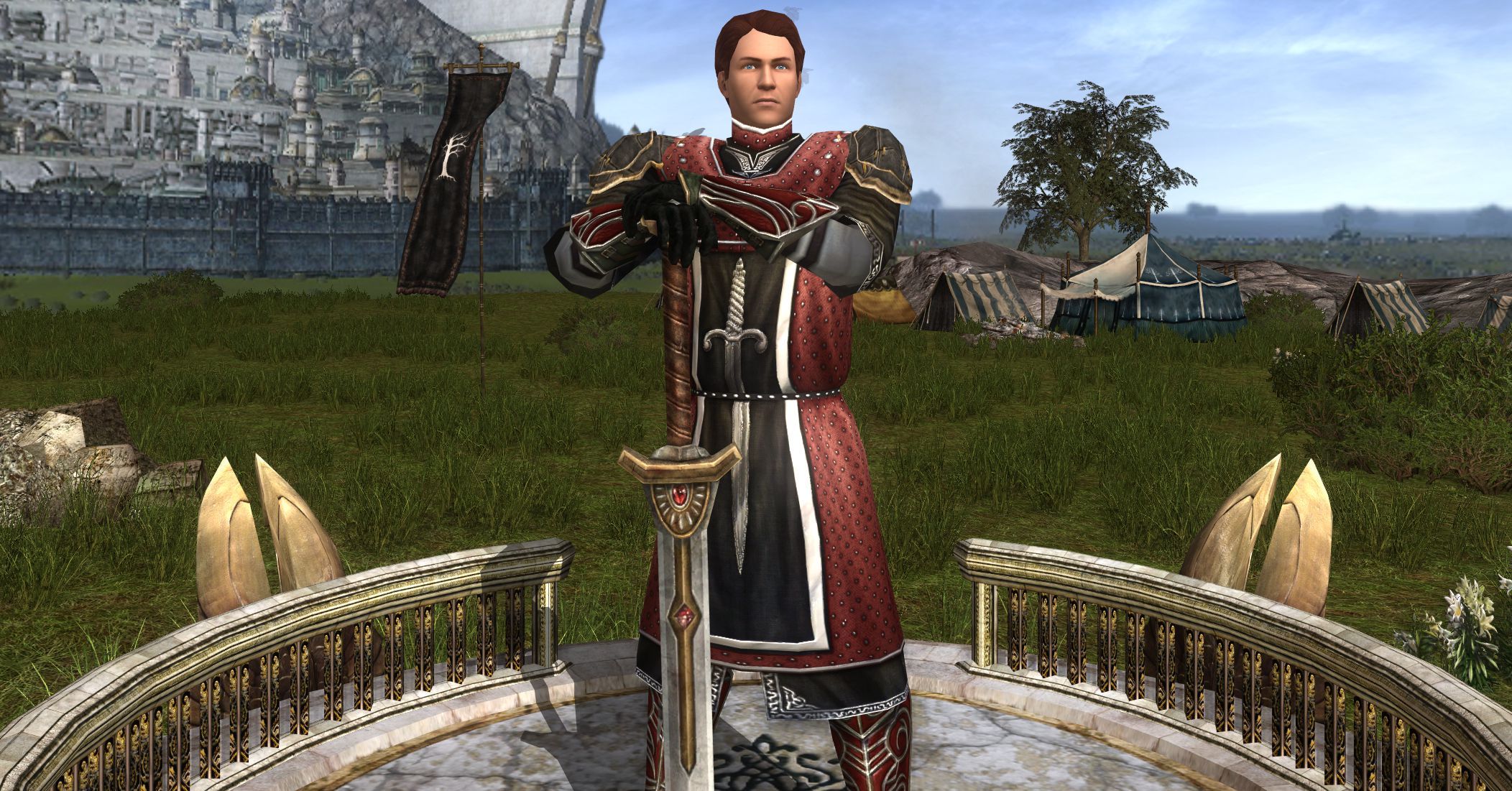 Captains are armoured melee fighters and masters of buffing; skills that enhance allies. They may summon a Herald companion to fight by their side, ensuring they always have an ally to buff. They can also Mark foes, giving benefits to all who attack them.

In fellowships, a Captain supports his allies with healing and buffs, while still dealing respectable damage. 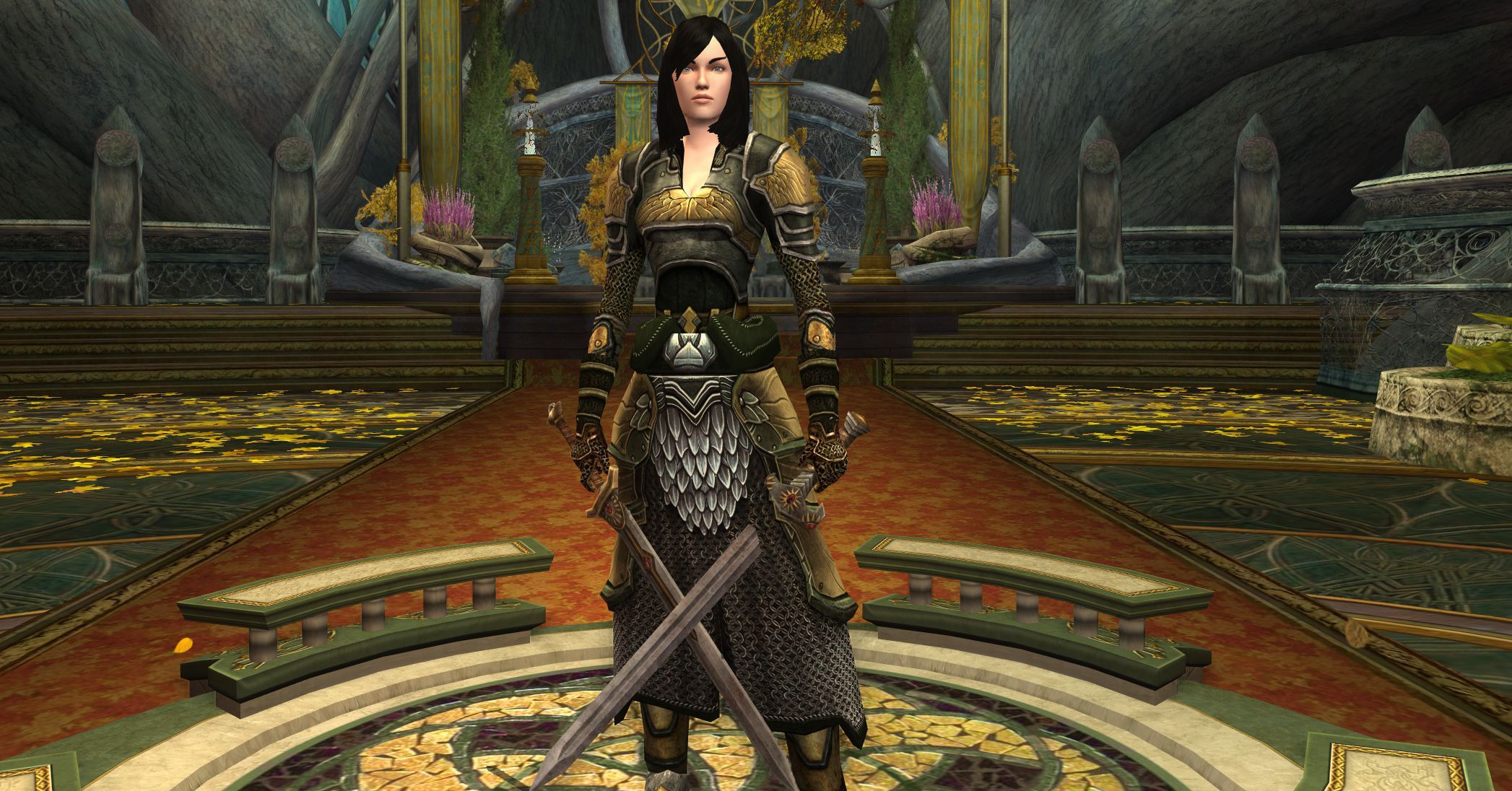 Class Difficulty: Basic
Role: Damage
Armor: Light, Medium & Heavy
Weapons: Bows, Crossbows, Daggers, Dual Wielding, One-Handed Axes, One-Handed Clubs, One-Handed Hammers, One-Handed Maces, One-Handed Swords
Instruments: Bassoon, Fiddle, Horn, Lute
Lore: Unrelenting in battle, Champions are the consummate warriors. A Champion cares not for his own well-being, but relies on his strength and prowess to slay the Enemy before they can bring more destruction to Middle- earth. This class is inspired by Gimli son of Glôin, whose skill in arms matched the bow-skills of Legolas.

Champions wade into battle swinging their weapons in all directions, dealing significant damage to many foes at once. With each strike their Fervour grows, allowing them to use even more potent skills. Special stances may be used to greatly increase damage dealt at the cost of defence or enhance defence at the cost of damage.

In fellowships, a Champion concentrates on engaging as many foes as possible. 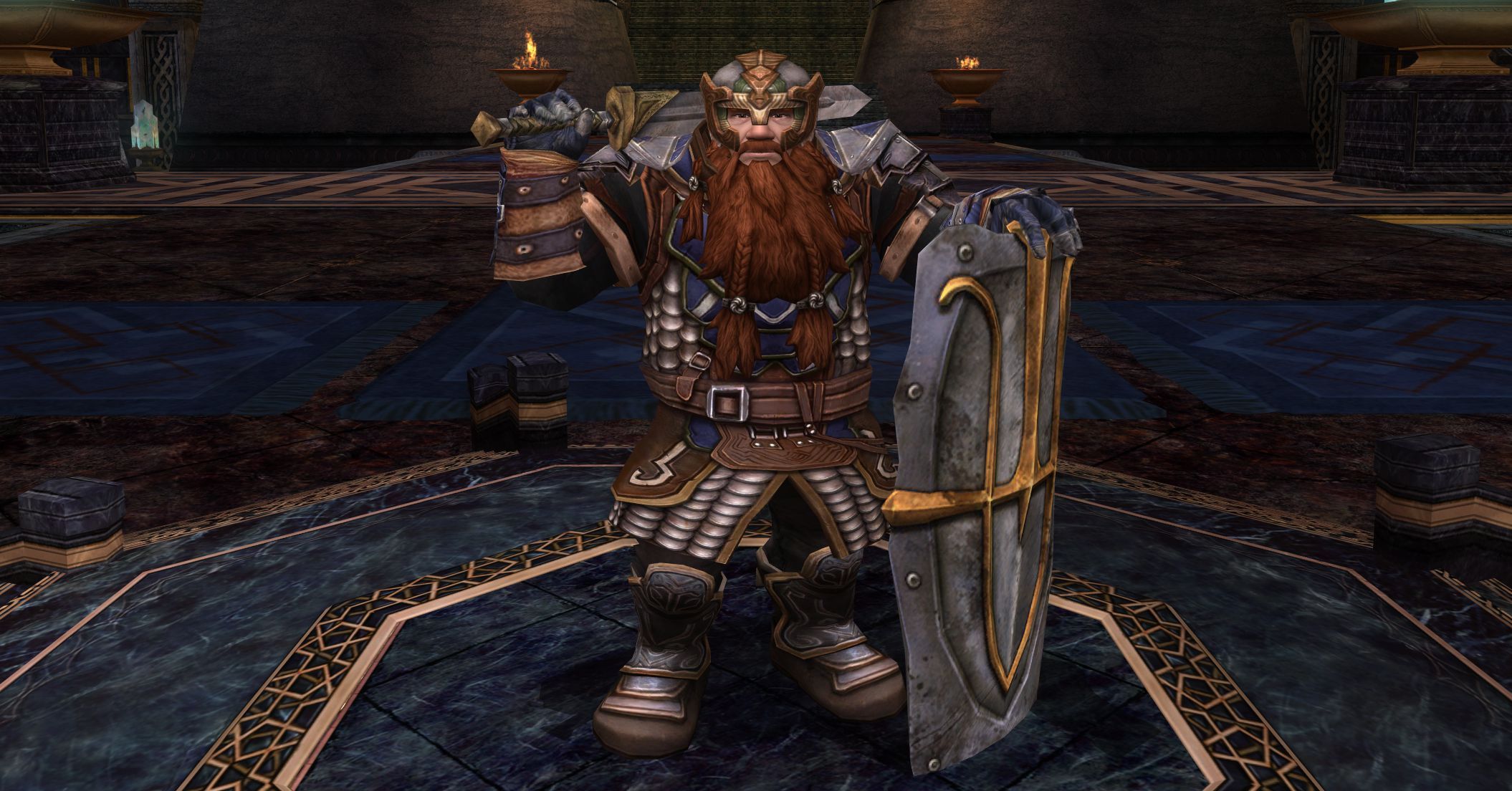 Guardians wear heavy armour and have many defensive skills that allow them to survive battles against the most fearsome foes. Guardians also have skills that draw foes’ attention away from their allies and to themselves.

In fellowships, a Guardian forces enemies to attack himself, so his more fragile allies will not be harmed by the foes. 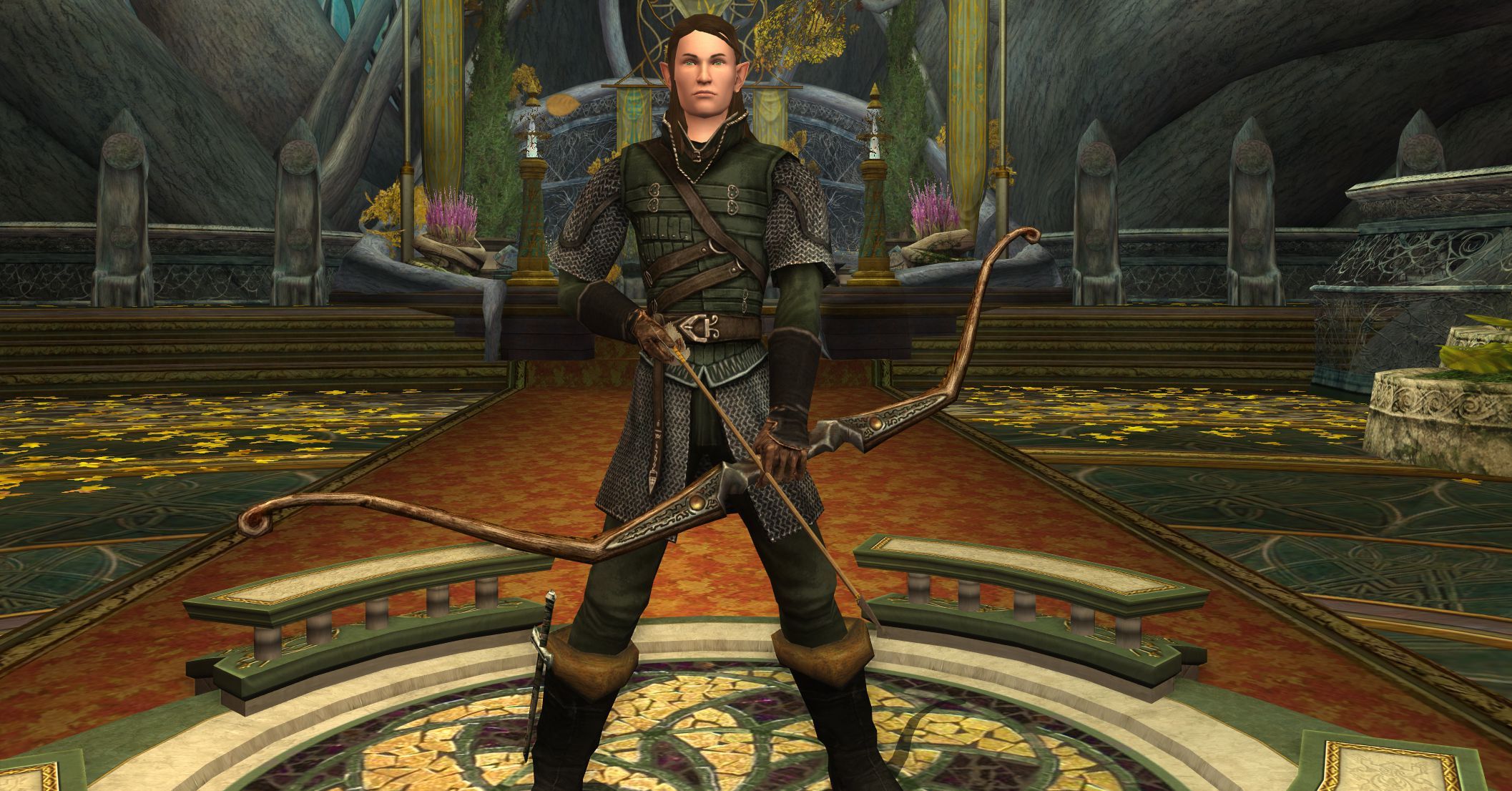 Class Difficulty: Basic
Role: Damage
Armor: Light & Medium
Weapons: Bows, Daggers, Dual Wielding, One-Handed Axes, One-Handed Swords
Instruments: Clarinet, Lute
Lore: Hunters are masters of field and forest/ unmatched in their dexterity with the bow. They use their survival skills to guide companions and lay traps for enemies. The coming of the Enemy has forced them to adapt these skills to use against new prey. This class was inspired by Legolas, Prince of Mirkwood, a mighty hunter and companion of Aragorn.

Hunters are proficient at dealing significant damage to a single foe at long range. Their basic bow skills generate Focus points, allowing them to use even more potent skills. If a foe manages to close into melee, the Hunter’s dual-wielded weapons are capable of dealing the final blow.

In fellowships, a Hunter concentrates on quickly killing foes one at a time. 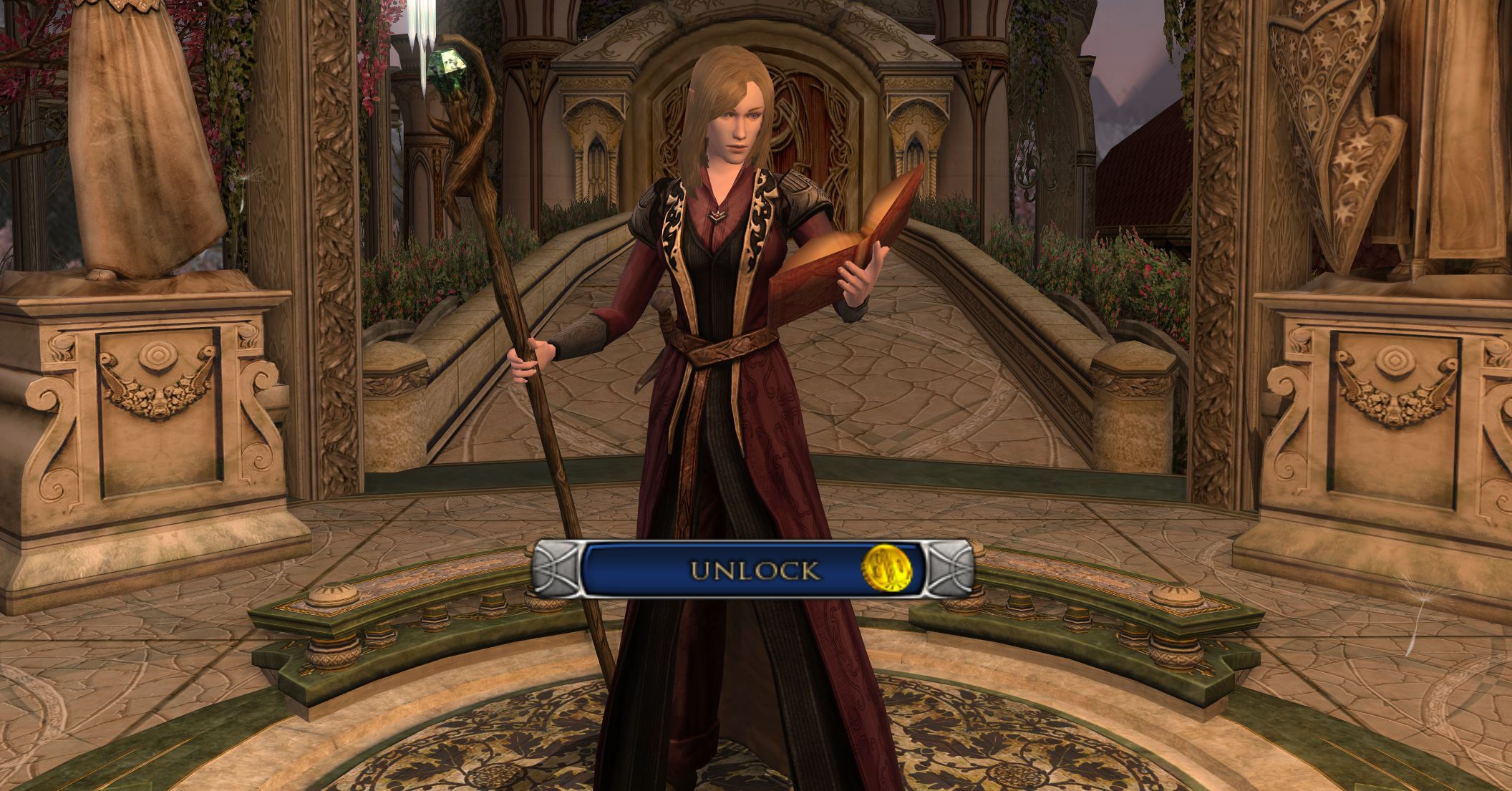 Class Difficulty: Advanced
Role: Support
Armor: Light
Weapons: Two-Handed Staves
Instruments: Clarinet, Lute
Lore: Lore-masters are seekers of knowledge and the guardians of wisdom. Through study of bygone Ages, they learn ancient secrets that allow them to hinder foes, as well as protect against the dark powers of the Enemy. They have many skills that invoke the natural world of Middle-earth, but it is draining on the will, thus costing them Morale to fuel some of these powerful skills. This class was inspired by Elrond Halfelven, Elf-lord and Master of Rivendell.

Lore-masters are the masters of crowd-control, skills that trap foes and keep them from fighting. They may call on animal companions to fight by their side and even call on elemental forces to damage their foes.

In fellowships, a Lore-master concentrates on supporting his allies, primarily by hindering the foe’s ability to deal damage. 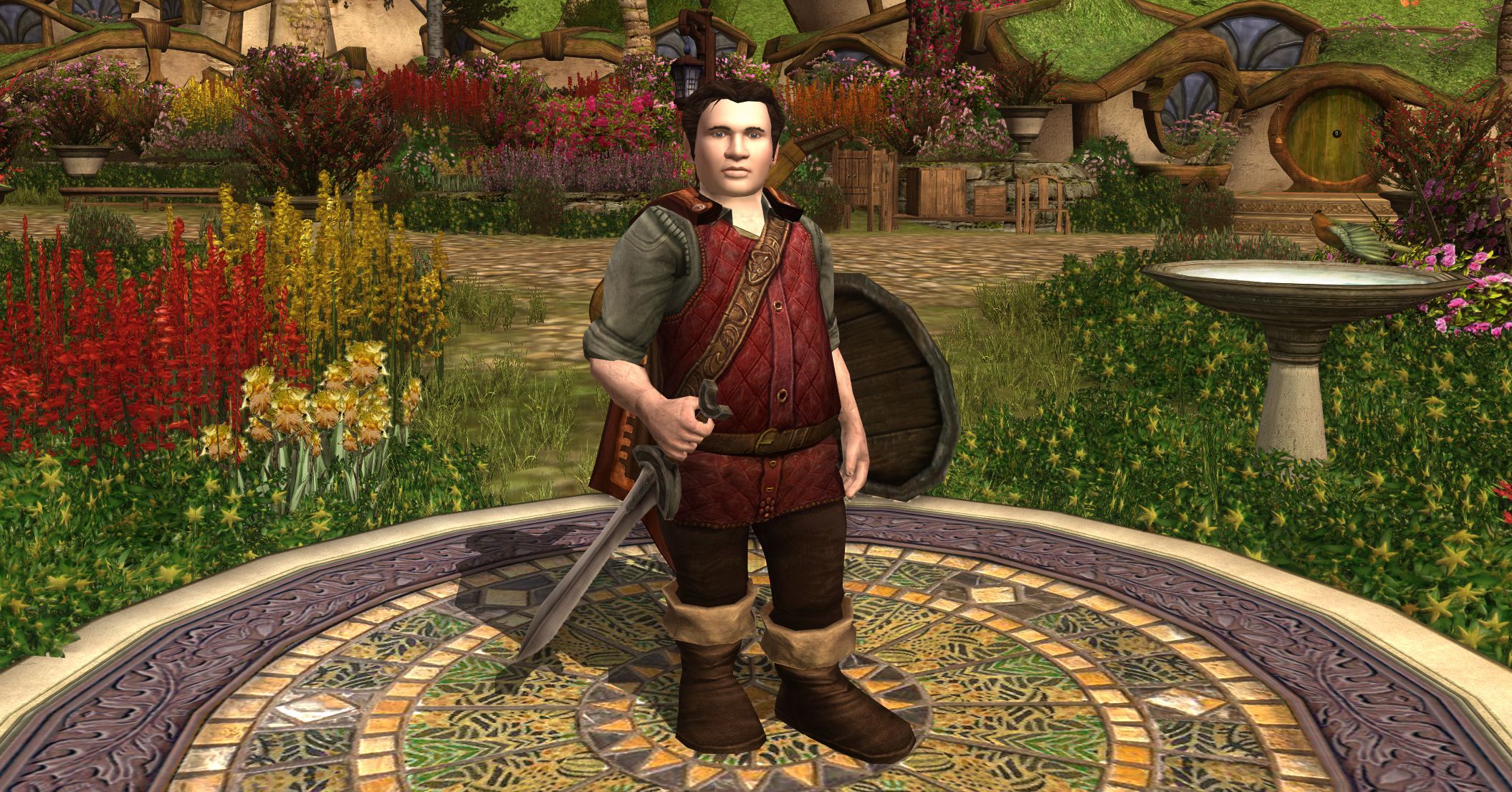 Class Difficulty: Moderate
Role: Healer
Armor: Light
Weapons: Daggers, One-Handed Clubs, One-Handed Maces, One-Handed Swords
Instruments: Basic Cowbell, Clarinet, Flute, Harp, Horn, Lute, Pibgorn
Lore: Middle-earth is a land deeply infused with music, and true Minstrels are skilled at tapping into that power. They weave songs and tales so stirring that their companions’ morale will not fail, and they will be driven to perform greater feats of prowess. They can even utter words of true power and ward against the forces of darkness with their Anthems. This class was inspired by Lùthien Tinûviel, whose Elven voice beguiled friend and foe alike.

Minstrels are known for their healing abilities and are capable of dealing respectable damage with War-speech. They have a variety of support skills and special Ballads. Using a Ballad unlocks more potent Ballads, which culminate with powerful Anthems.

In fellowships, a Minstrel keeps his allies healed and supported. 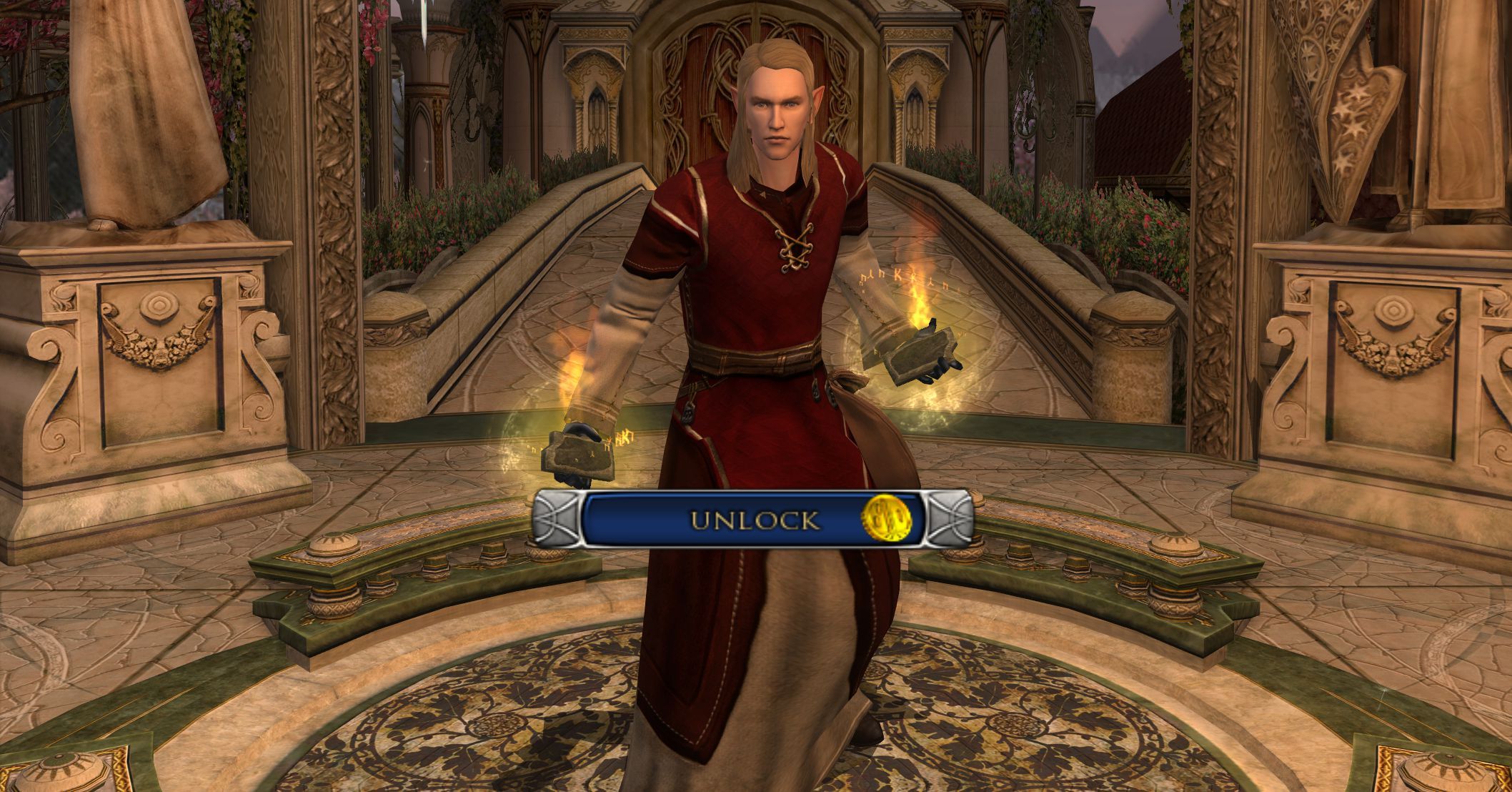 Class Difficulty: Moderate
Role: Damage / Healer
Armor: Light
Weapons: No Weapons
Instruments: Fiddle, Horn, Lute
Lore: Rune-keepers are gifted linguists and masters of true names. With this knowledge, a Rune-keeper crafts powerful rune- words that help the Free Peoples. Through unparalleled mastery of Angerthas and Tengwar runes, a Rune-keeper evokes much more than a normal scribe. Dagor runes deal with battle, Nestad with healing, and Thalas with support. This class is inspired by the master Elf-smith Celebrimbor, whose skill with runes of power was unparalleled.

You can unlock Rune-Keepers by paying 795 LOTRO Points.

Rune-keepers must choose during each battle to focus on damaging skills or healing skills. Either choice will shift their Attunement, unlocking more potent skills, but restricting access to others. In addition, they have support skills that may always be used.

In fellowships, a Rune-keeper keeps allies healed or deals significant damage to the foes. 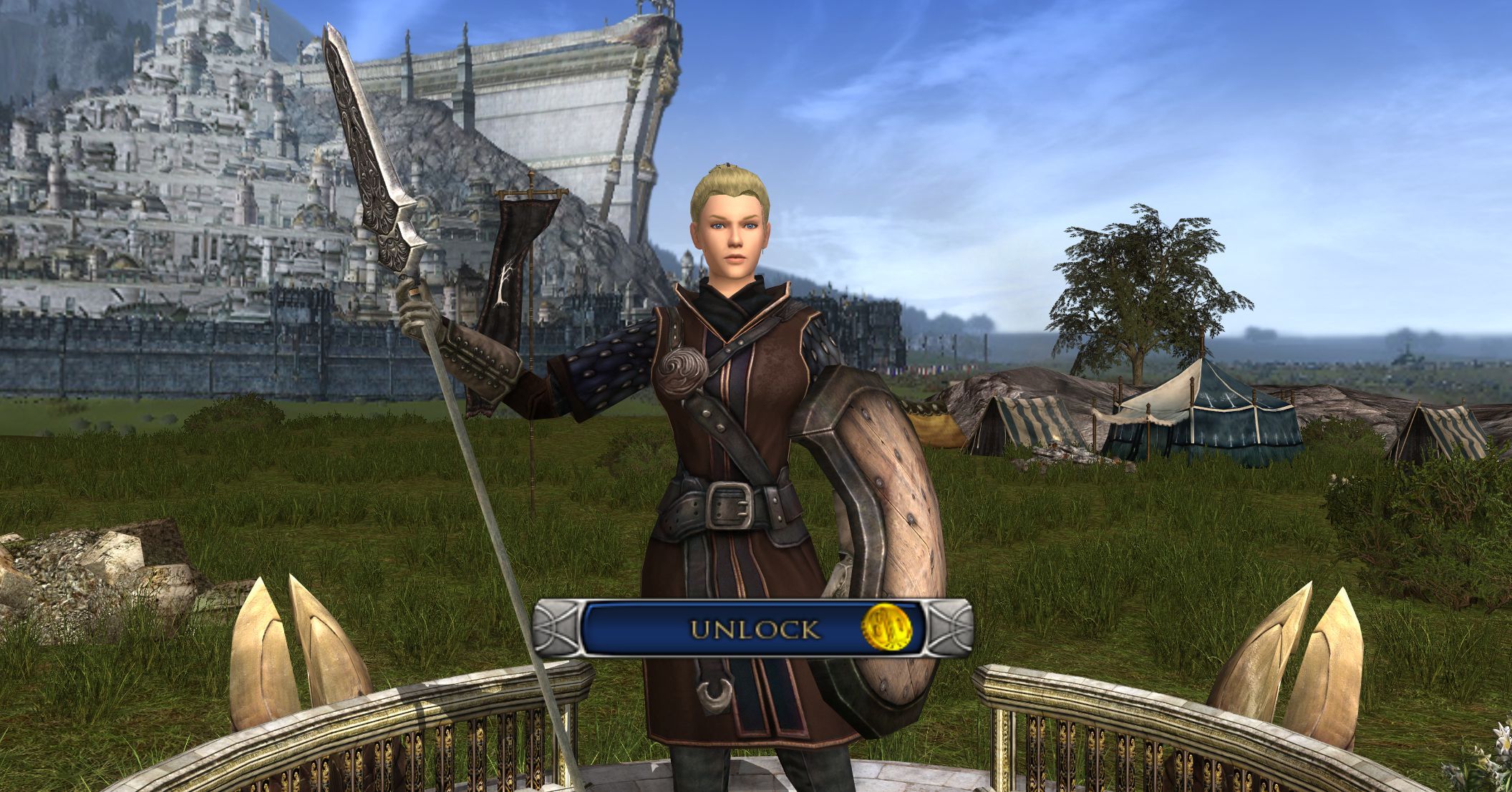 Class Difficulty: Advanced
Role: Defence
Armor: Light & Medium Armor, Shields & Warden’s  Shields
Weapons: Daggers, Javelins, One-Handed Axes, One-Handed Clubs, One-Handed Hammers, One-Handed Maces, One-Handed Swords, Spears
Instruments: Fiddle, Horn, Lute
Lore: The Warden patrols the borders of civilized lands, preventing the encroachment of fell creatures from the Wild. They limit themselves to medium armour so that they can travel swiftly and silently to defend those they protect from threats. Wardens all have some military training and have mastered a style of combat that uses combinations of basic attacks to create masterful Gambits. This class was inspired by the marchwarden of Lothlôrien, Haldir, and his brothers Rumil and Orophin.

You can unlock Wardens by paying 1,000 LOTRO Points.

Wardens are mobile melee combatants who use Javelins for initiating combat and against ranged foes. Their unique Warden Shields and a variety of defensive skills allow them to stay in the fight longer than most. Basic Warden skills build up their Gambit chain, which can be spent to unleash special Gambit skills.

In fellowships, a Warden forces enemies to attack himself, so his more fragile allies will not be harmed by the foes.