Valheim is a game where besides building, crafting, and fighting there’s also a feature that will allow you to tame a few animals, 3 in total to be precise, but the process is very time consuming and tedious with the game providing very little knowledge on how to even begin taming them.

In this guide, we will show you how to tame each one of them so you won’t need to run around aimlessly having to waste so many hours just for one single animal.

Each creature in Valheim comes with three different levels and three slightly different appearances that are indicated by the stars below its health bar no star, one star, and two stars, each one has different stats with of course the two stars being the most powerful.

One last thing to note is that each animal that can be tamed has a few indicators above its head, two icons that indicate the level of alertness, and some words inside the parenthesis that tell you if it’s wild, its taming progress and its mood.

Here are a few images to get an idea. The indicators above the Boar’s head counts for all animals that can be tamed.

How to Capture Boars 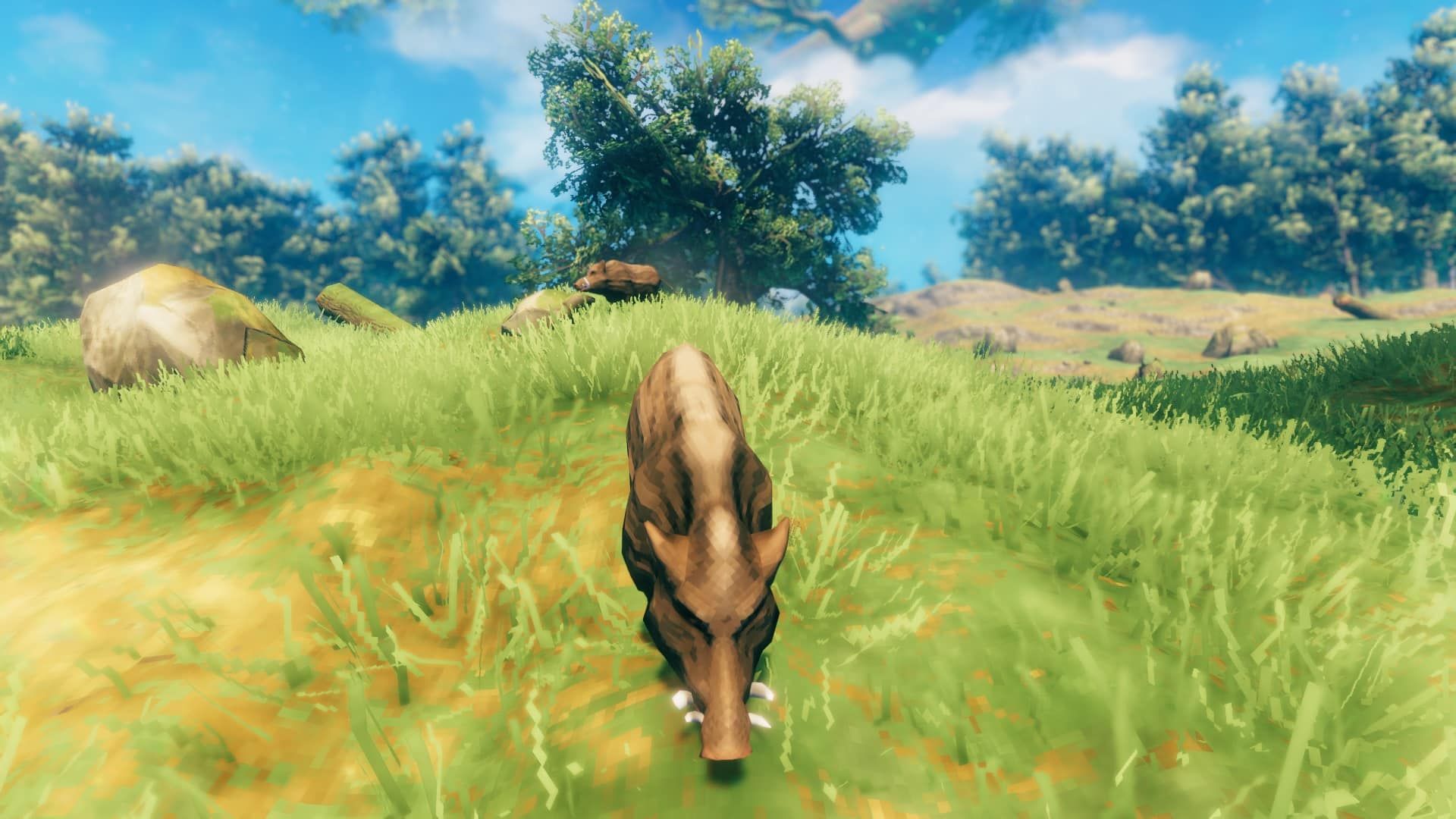 The Boar is the first and easiest animal to tame, they live in the Meadows biome and they usually travel in packs, what you need to tame a Boar is food from bushes and the ground, to be more specific they will only eat Raspberries, Blueberries, Red Mushrooms, Carrots, and Turnips.

The easiest food you will find first are the Raspberries, and while they are quite a lot in the fields of the Meadows, it is recommended not to overuse them as they are not available for farming and can be only picked up from bushes, although we really hope a future update will give us the ability to plant and farm them along with Blueberries and Red Mushrooms.

What you could use to feed Boars instead are Carrots and Turnips since if you find just a few seeds you can plant them and have practically an infinite amount.

There is a mod that can help you with planting Raspberries and Blueberries on the Nexus Mods website if you are interested.

Here’s step by step what you need to do in order to successfully tame a Boar. 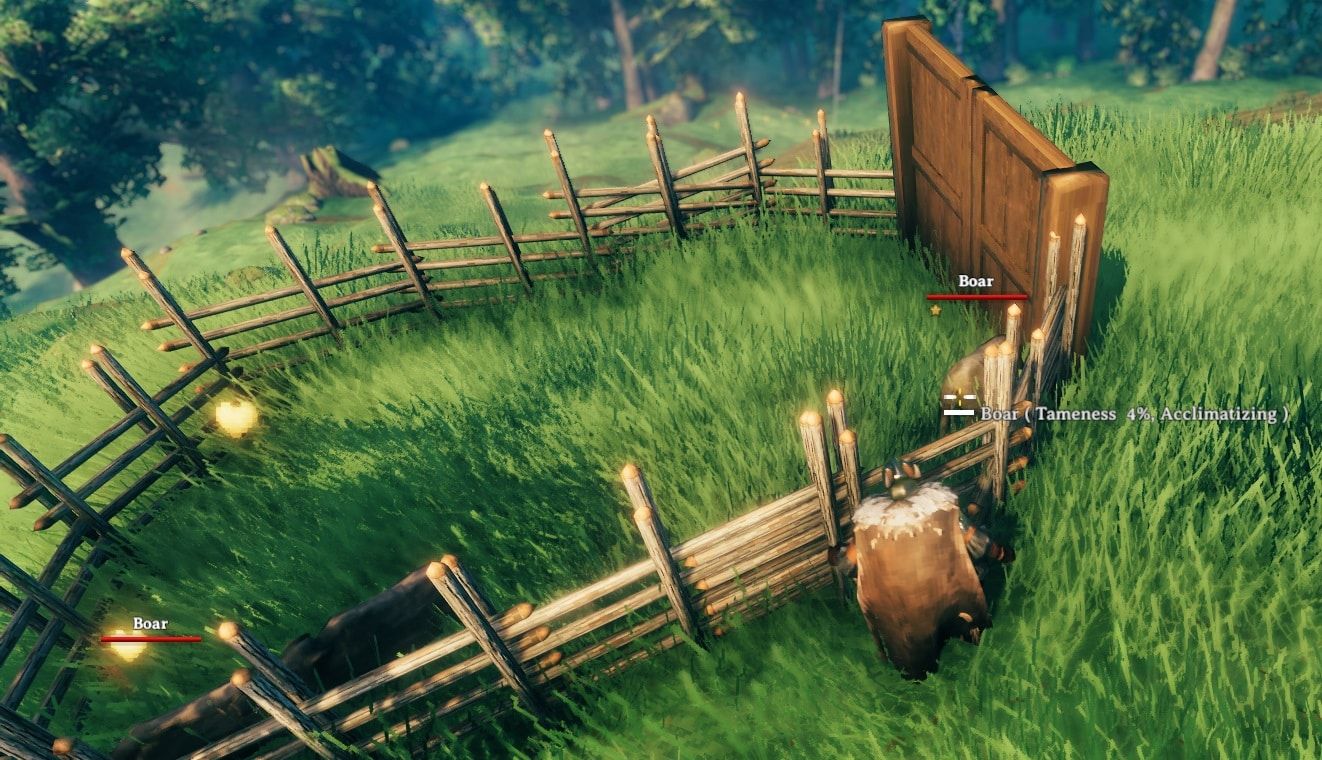 This is how an enclosure for taming a Boar looks like, notice the yellow hearts above the boars, that means the taming process is working.

One last thing, if you want to bring more Boars in the enclosure and want to make sure your already tamed one won’t escape, you can make a small fence around it while inside the enclosure and keep it temporarily in there.

When you have successfully tamed two Boars you will be able to breed them, in order to do that them they need to have the Hungry status so they can eat, change their status to Happy and then reproduce. 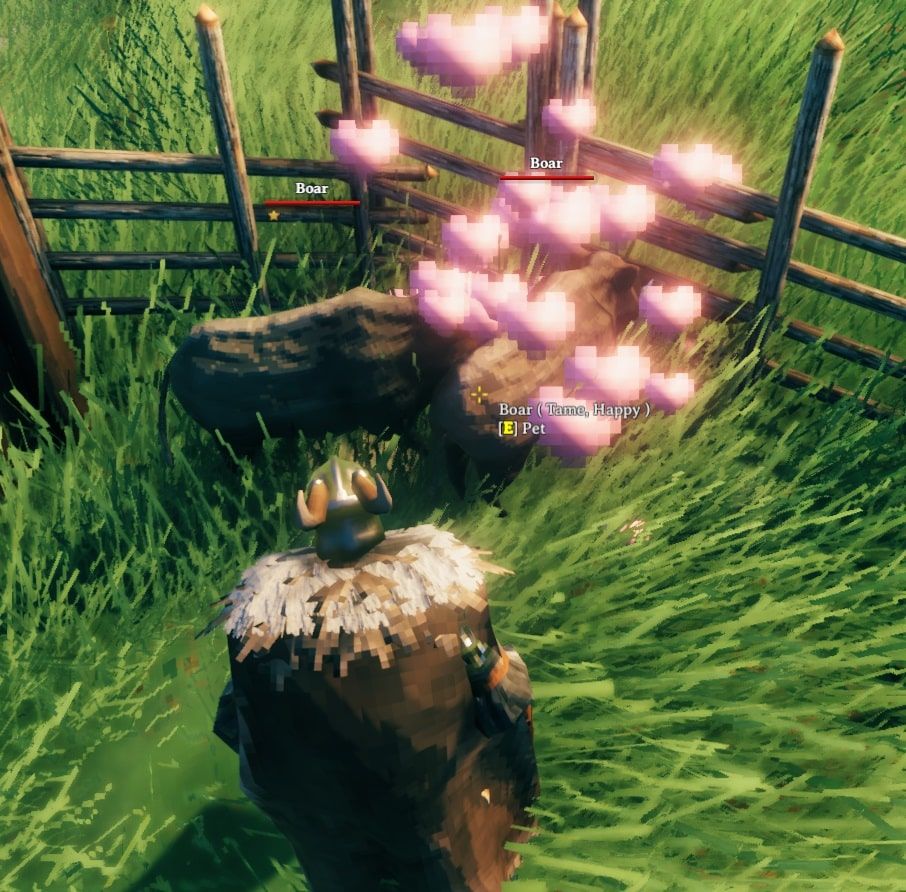 Love is in the air, Valheim.

After that, one of the pigs will squeal and a Piggy will appear, breeding Boars with two different rarities will have a 50-50 chance to produce a Piggy with either parent’s rarity. 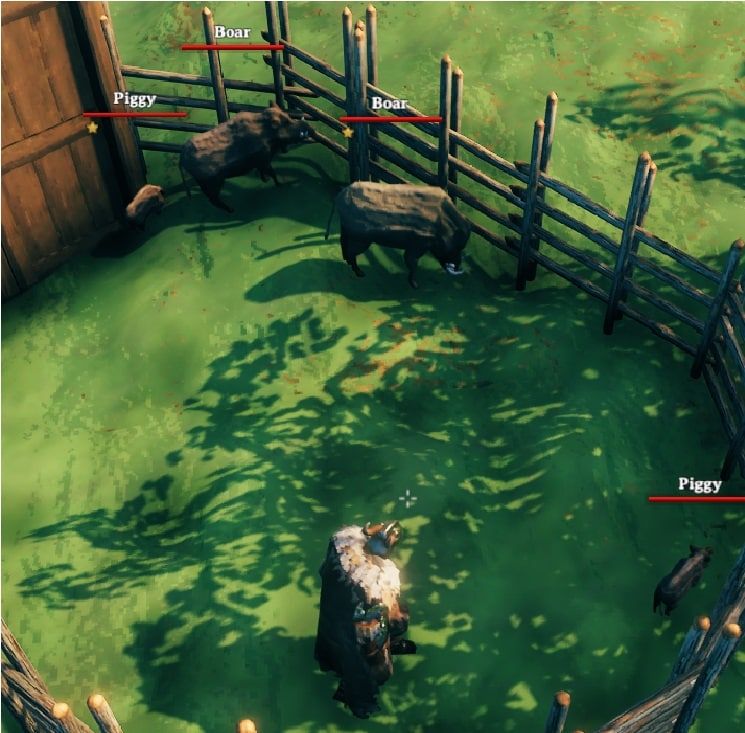 Breeding Boars has many advantages for early game players in Valheim as they provide them with Raw Meat and Leather Scraps, one downside they have though is that they can not be ordered to follow you and this might become frustrating if you have your base somewhere far away.

There are two ways of how you can move Boars from one place to another.

The Abyssal Harpoon allows you to leash almost every creature in the game and relocate them somewhere else.

The best way would be to do both of those as the Abyssal Harpoon uses a lot of stamina once the boar is going in the opposite direction, and even though it’s tamed it will become frightened when it gets hit. 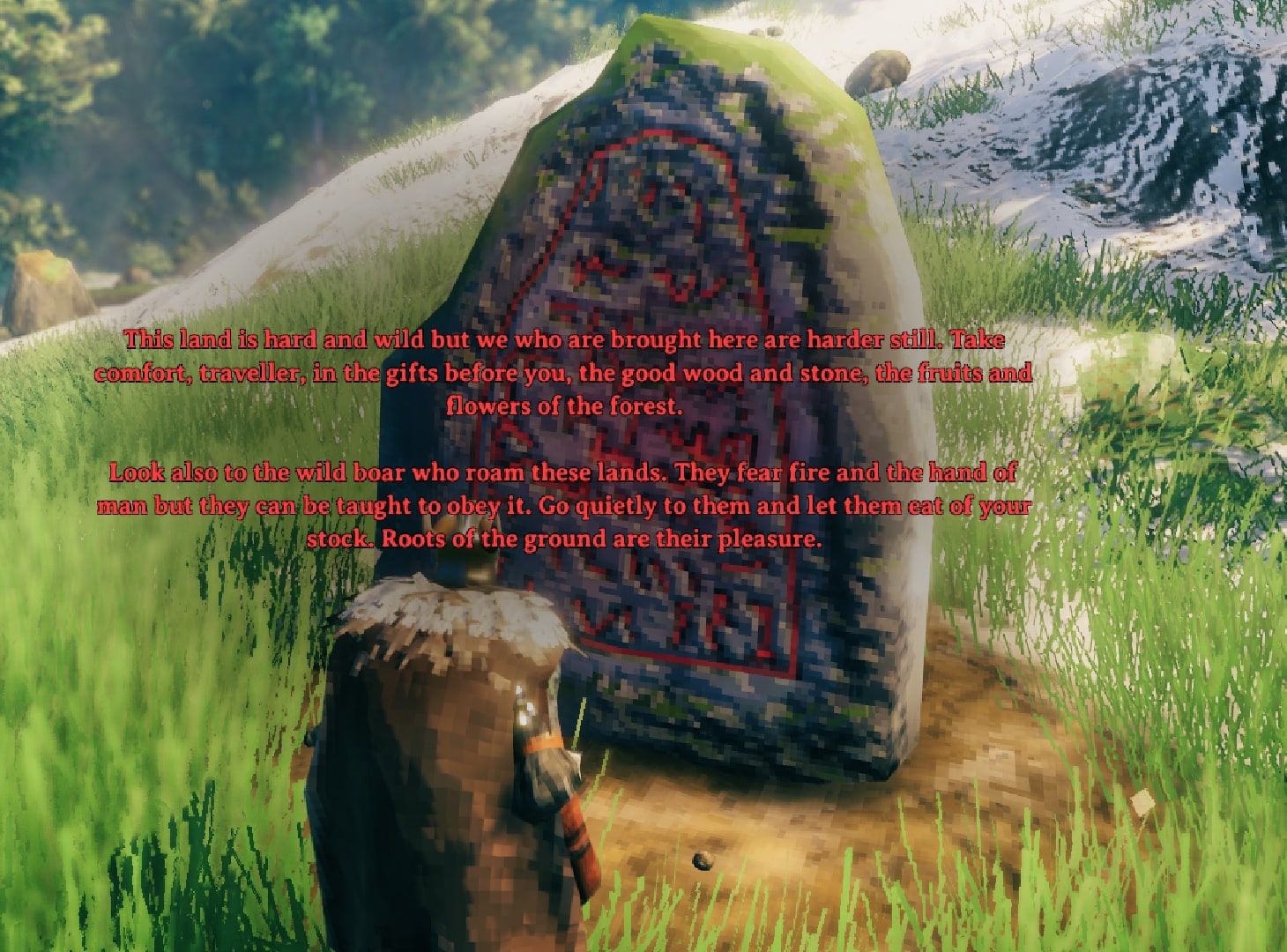 How to Capture Wolves 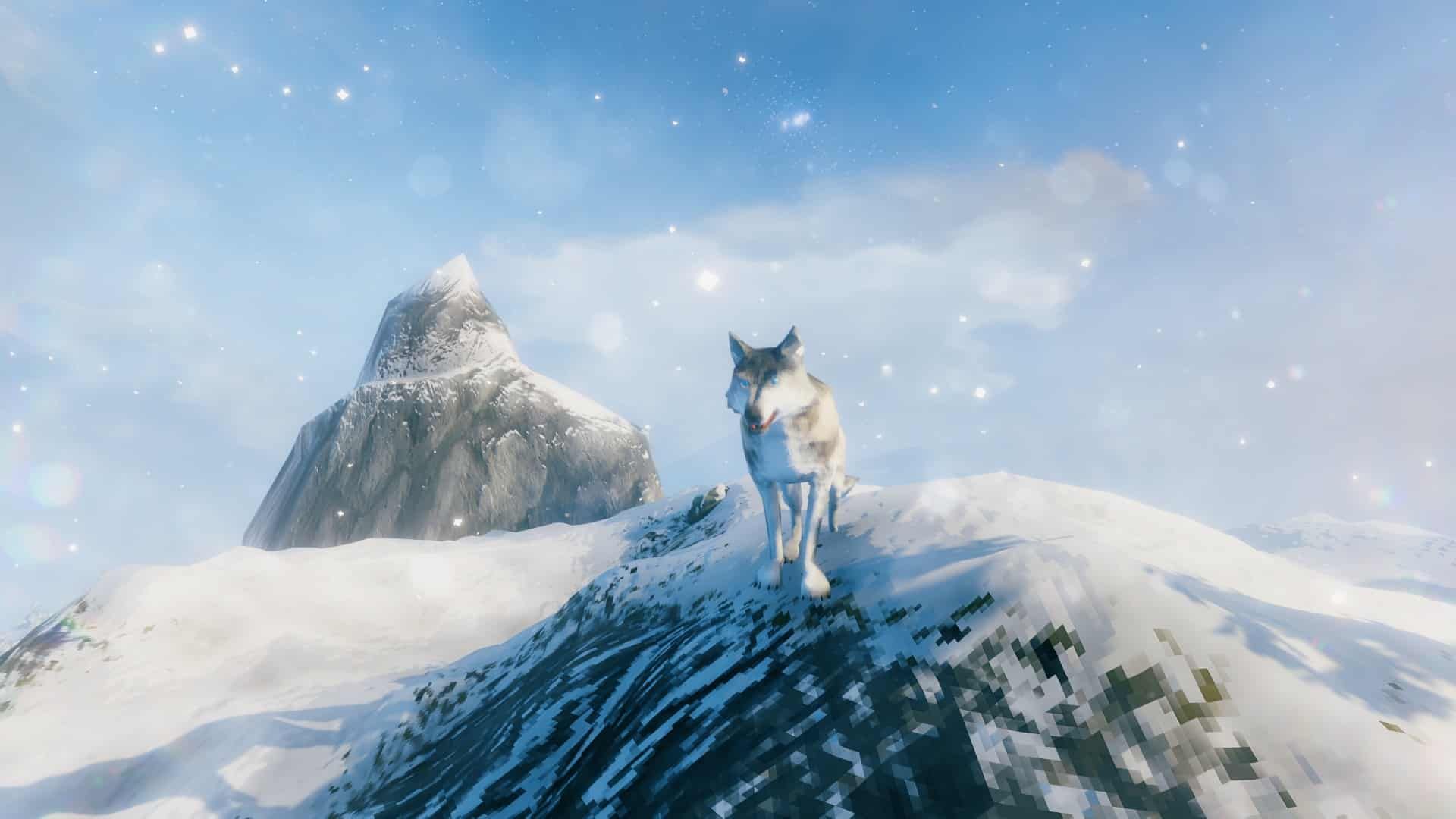 Wolves are aggressive animals and often travel in packs, it’s very rare to find only one by itself, they live in the Mountain biome, can aggro you from a fair distance and move to attack very quickly so when you are going to tame one you should at least have 60 Armor and the following items: Medium Healing Mead, Medium Stamina Mead, and food that increases your Stamina and a Pickaxe.

Also, keep in mind that you will need some Frost Resistance Mead which lasts for 10 minutes and it stops you from being damaged by the cold or a Wolf Armor Chest, Wolf fur Cape, or a Lox Cape.

Tamed Wolves can follow you and fight with you, making them one of the most useful tamed animals to have by your side.

And one thing to remember, Wolves with star ratings appear only at night and de-spawn at dawn, more info on that will be found below in the breeding section.

In order to tame a Wolf, you must first prepare yourself with what we mentioned above, after that you can follow this step by step procedure to successfully make one yours. 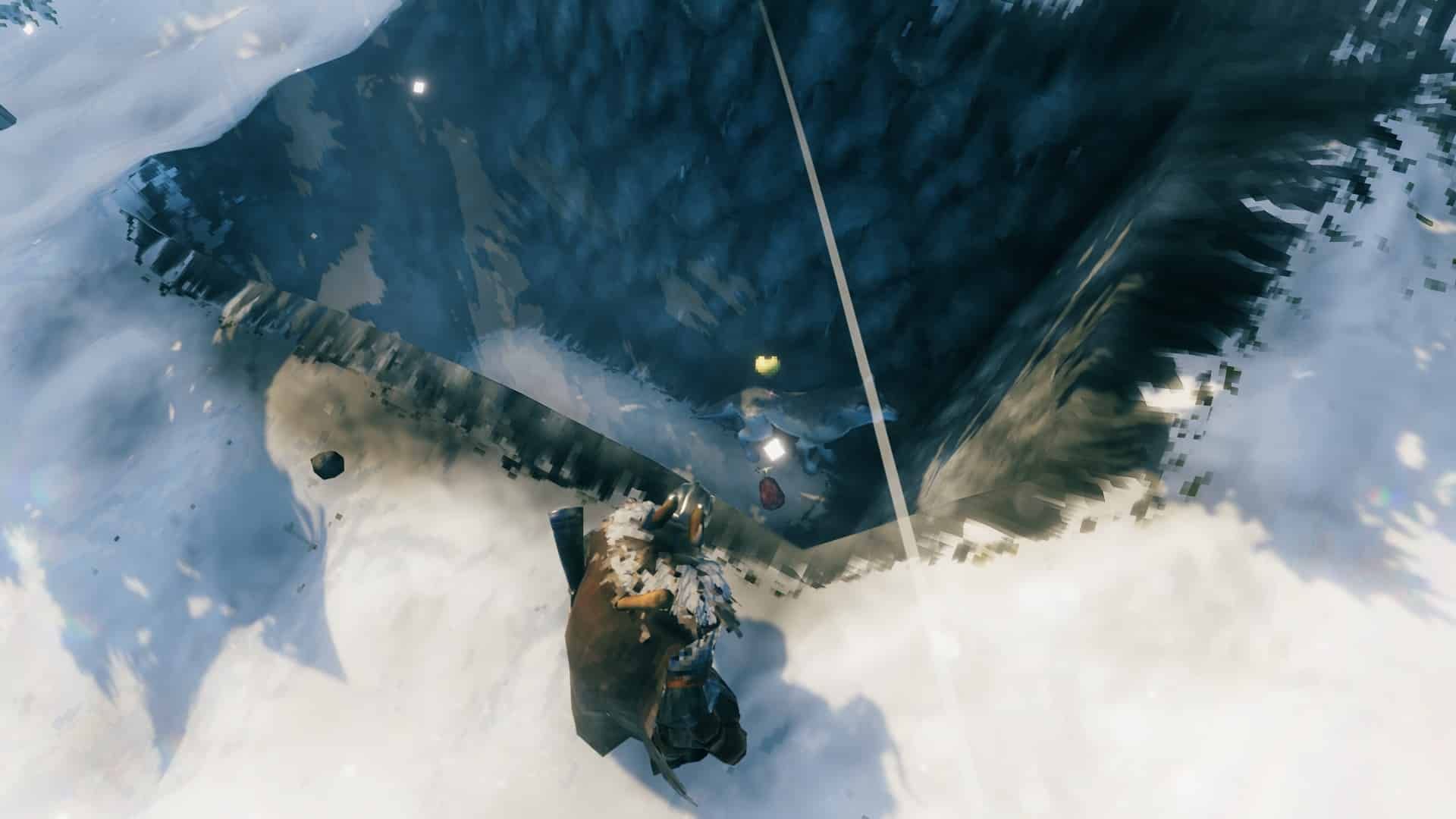 This is how a Wolf Pit should look like, be sure to make it deep enough because Wolves are good climbers. Notice the yellow hearts, that means the taming process is working.

It is recommended for the second Wolf to be a two starred one because they are twice as powerful as normal Wolves.

Keep in mind that breeding animals with two different rarities will produce an offspring that will have either one of them with a 50-50 chance. 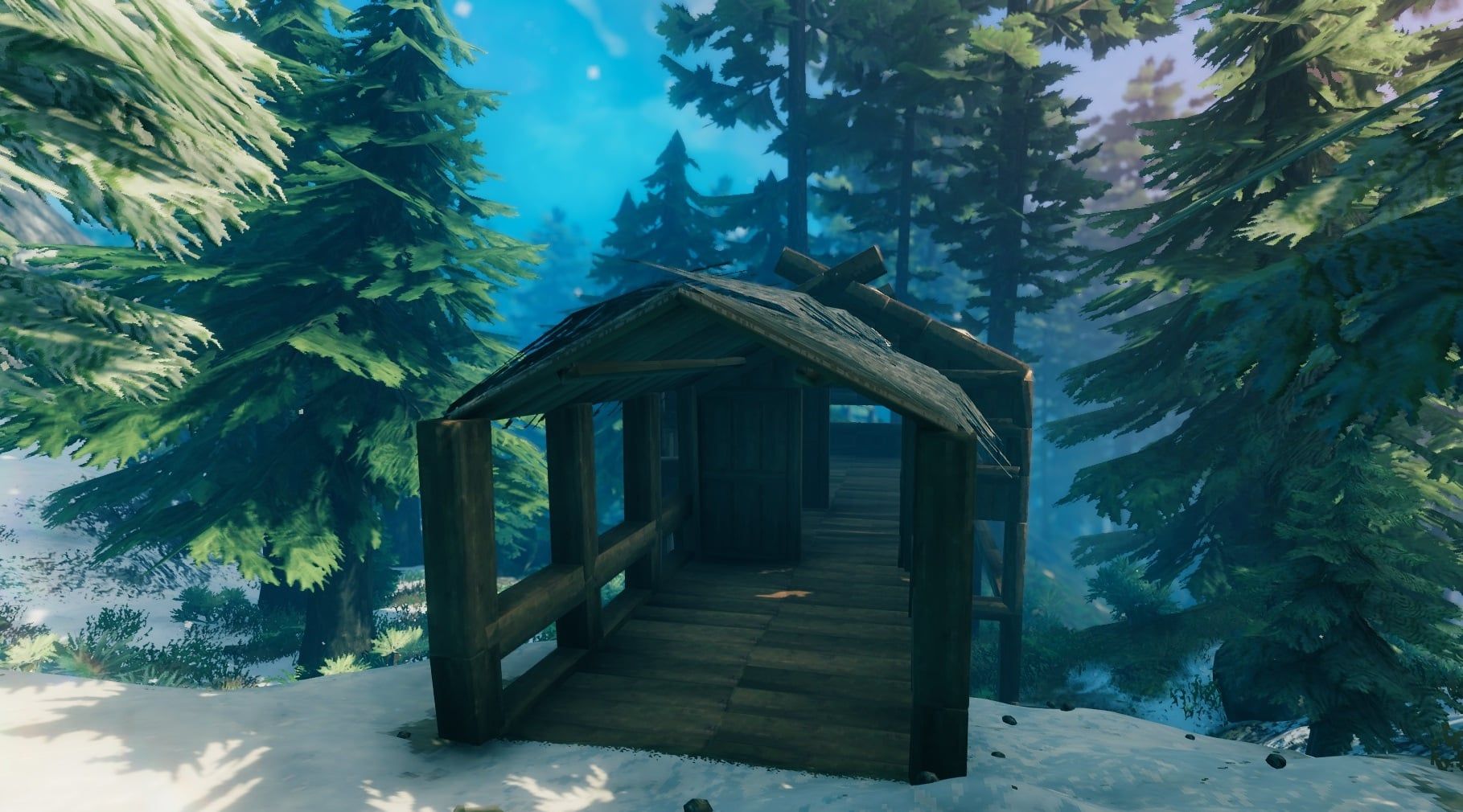 Wolf Breeding Cabin right between the Black Forest and the Mountain biome, Valheim

With that being said the two-star Wolf requires a little more effort, so before we get into breeding here is how you need to do it.

You can follow the same exact process as taming a normal Wolf but, you must have a full stack of Raw Meat and be next to it until it will be tamed.

Do not leave its side even if tamed, and do not let it get outside the hole in the daytime.

Taming a two starred Wolf is a very time consuming procedure so be sure to have plenty of free time beforehand.

Starred Wolves despawn at dawn, so even if you successfully tame them they will run away from you and disappear that’s why you need to build a cabin that fits two Wolves inside. 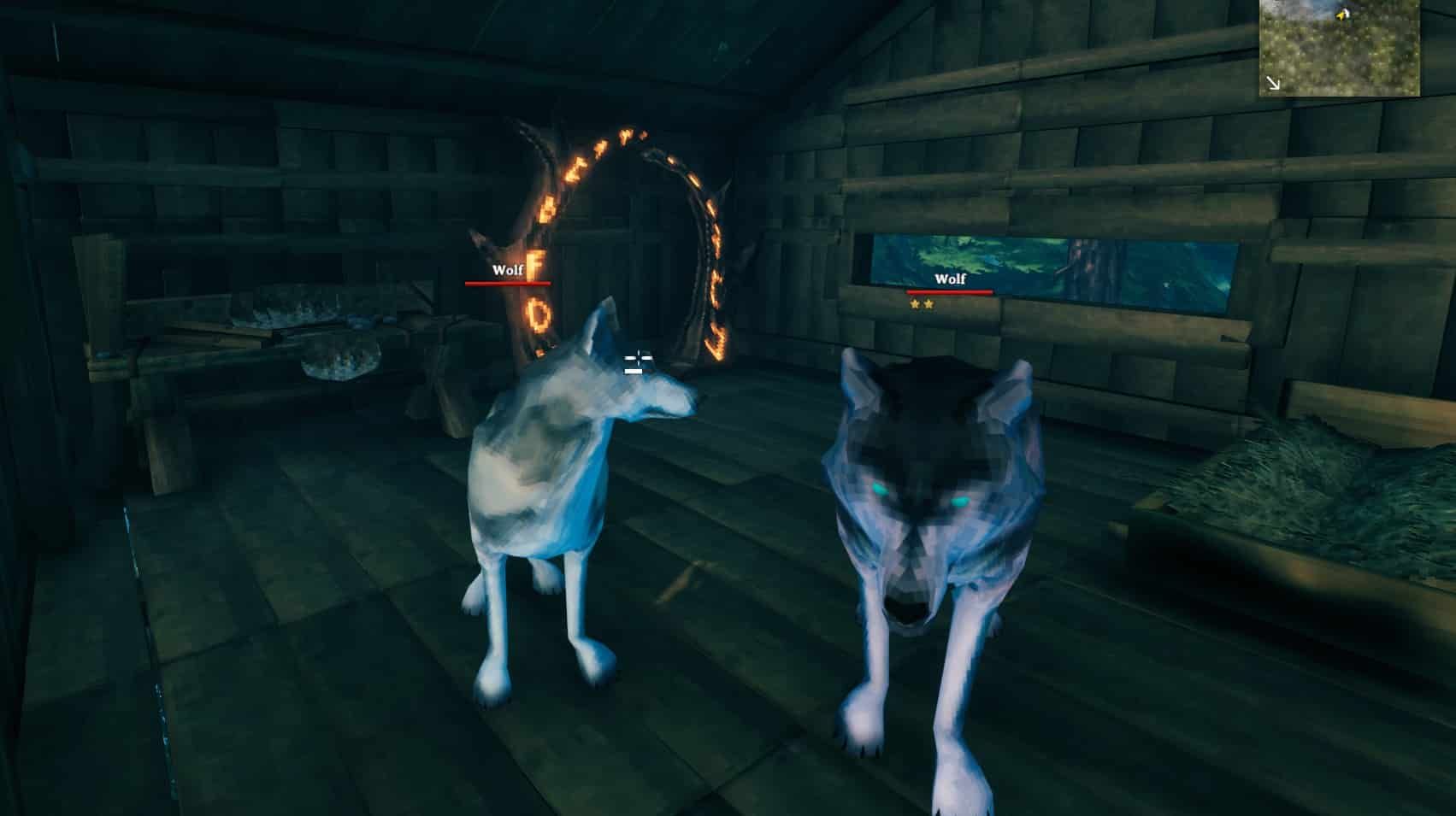 If you can you should also place a Portal for easier access.

Two starred Wolf Cubs do not despawn at day those are the ones that you are going to use to breed more two starred Wolves.

After that, the original two starred Wolf that you tamed is not needed anymore so you can let it despawn without worrying. 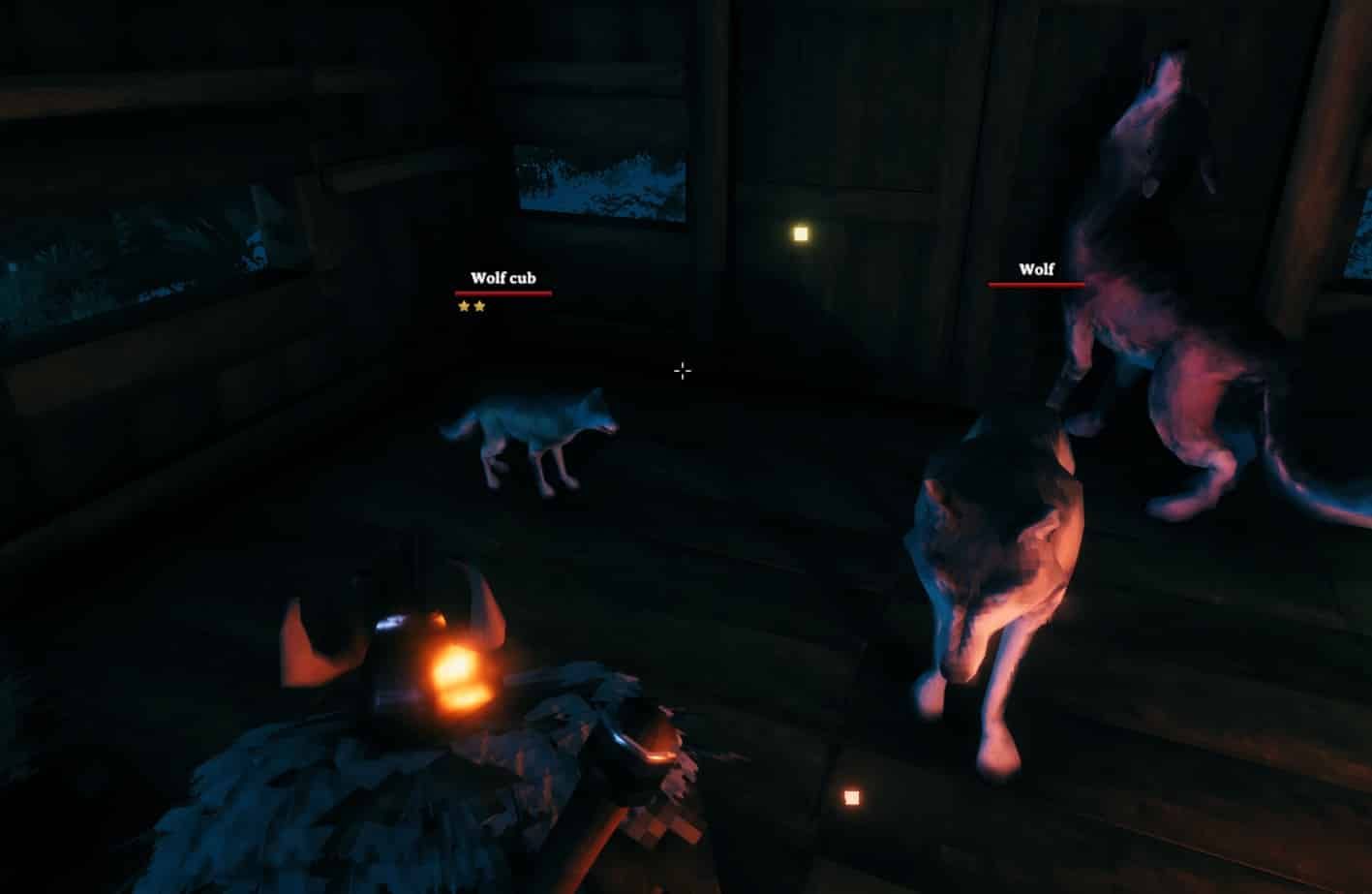 A two starred Wolf Cub and its parents, how cute !, Valheim.

The process of mating again is similar to the Boars, both animals need to be fed and be happy.

The time it takes for a Wolf Cub to fully mature is two in game days.

After you have bred at least two Wolves and you want to take them to your base, if the base is nearby you can simply interact with them to follow you, but if it is on another island, then you have to use a boat and for that we recommend the Longship since it’s big enough to fit two of them inside.

In order to make the Wolves get onto the ship though you have to make a platform that will end above the ship, what you need to do then is make them follow you until the end of the platform and then interact with them to stay so you can push them onto the ship. 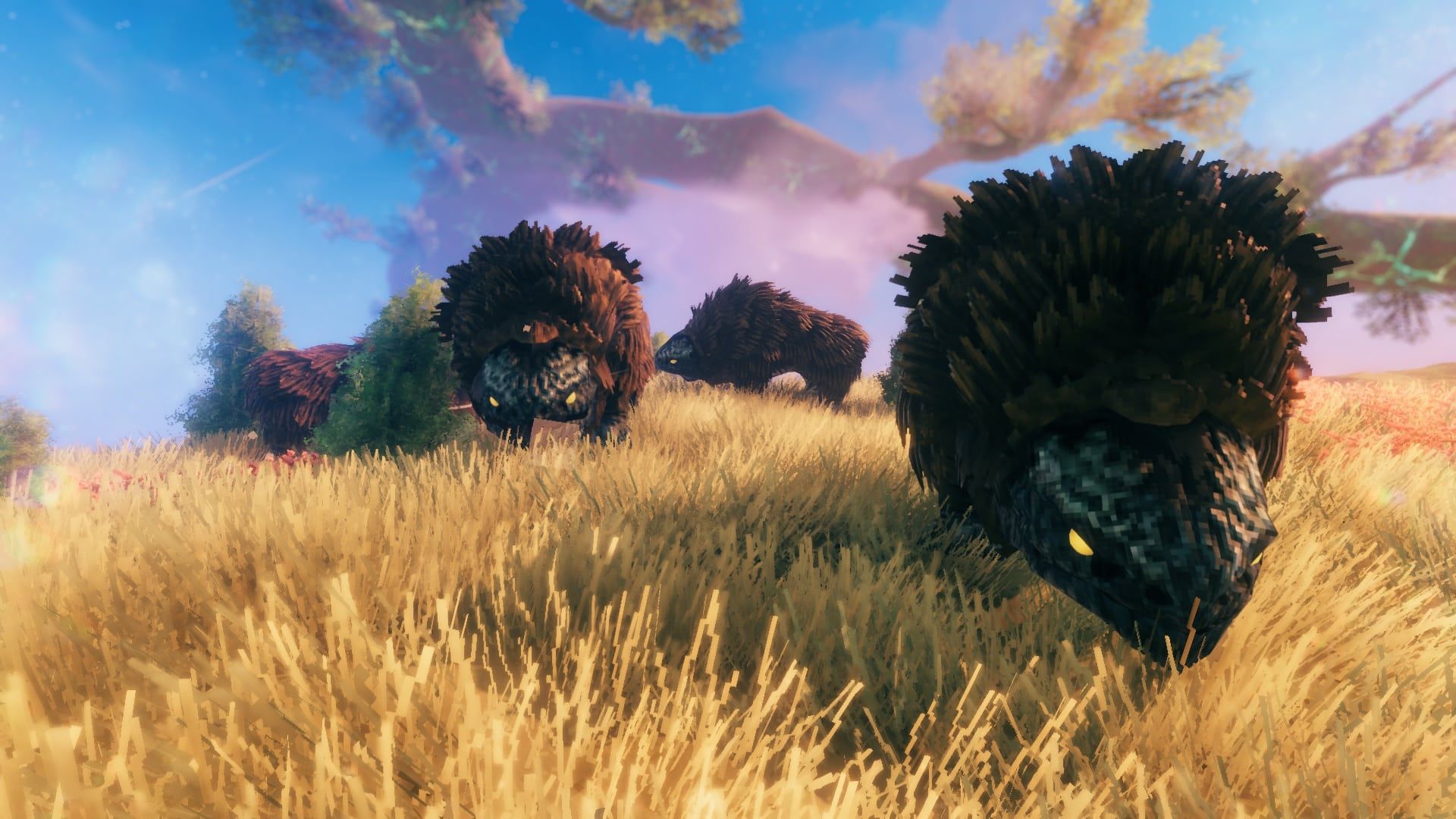 The Lox are reptile like creatures that live in the Plains biome, the Lox unlike the Wolf and the Boar, have terrible hearing and eyesight and will only aggro you if you get right into their face or start attacking them. 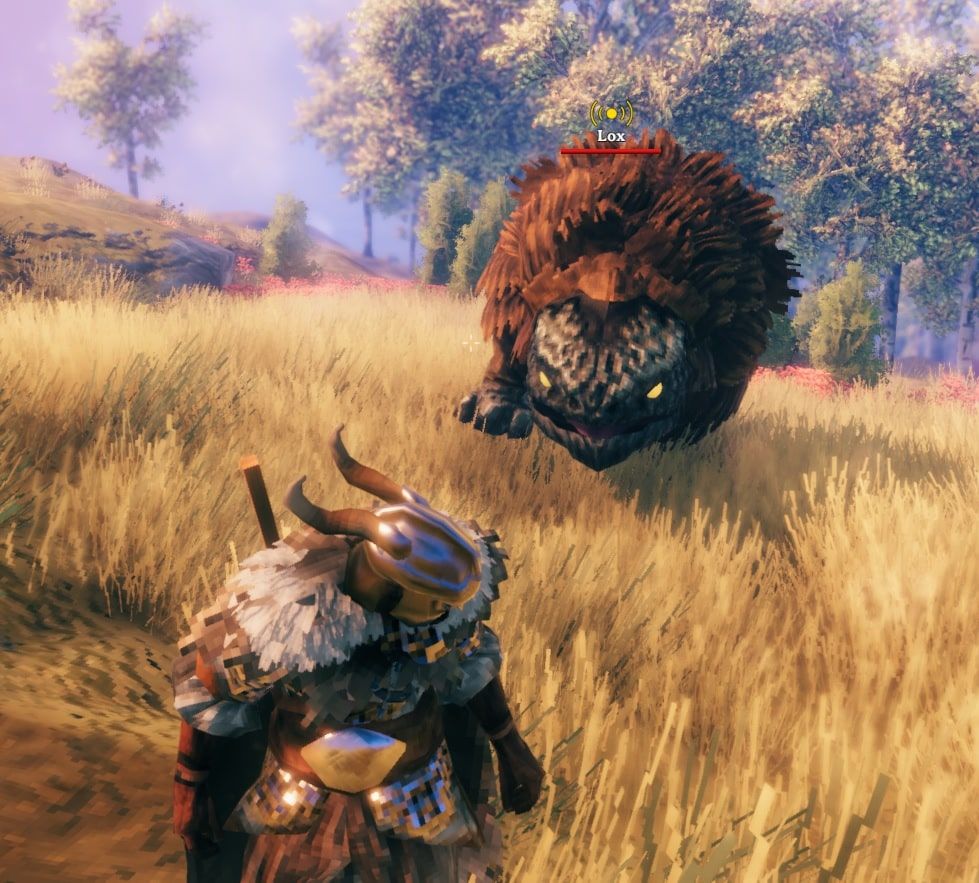 Look how close I am to this monster and it is still searching for me, Valheim.

The Lox can be usually found in a herd of 2 and up to 5, they are very strong creatures and can easily destroy wooden structures, so in order to tame them you have to make a Stone Wall enclosure by placing a Workbench and then a Stonecutter.

The Stonecutter requires 2 pieces of Iron for it to be built, and because you can’t take the Iron with you through the Portal you have to either go to the Plains by foot and boat, or by the logout/login method.

The logout/login method can be done as follows.

Congratulations you have successfully transferred an item that can’t be teleported.

Taming a Lox requires a lot of Stone and a big enough area for at least one of them to fit in.

The Stone is required to build an enclosure using Stone Walls but this time there’s not going to a Wood Gate, the Lox will be completely surrounded with Stone Walls.

Before you venture out in the Plains, keep in mind that this area is extremely hard and you will find numerous enemies that will deal a lot of damage, one in particular that you should always keep an eye out for is the Deathsquito.

Here’s a step by step procedure on how to tame a Lox. 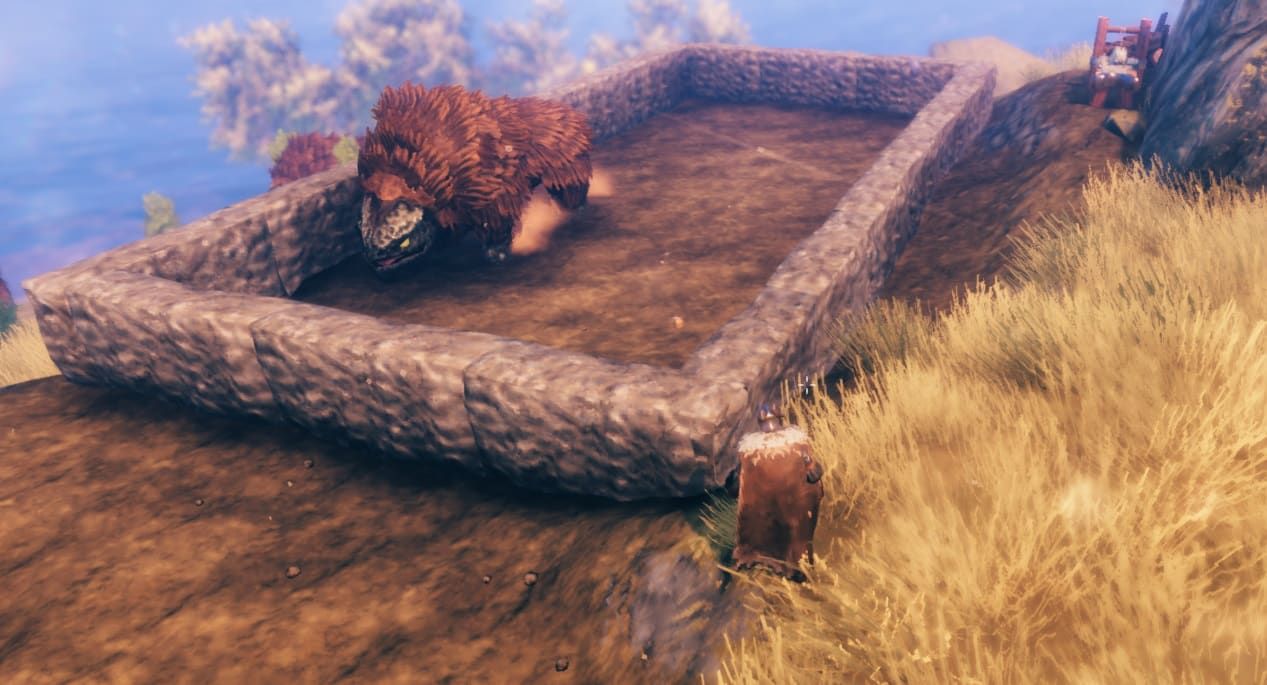 Keep in mind that as of 147.3 Lox have no usefulness in the game besides being tamed and petted.

They can not breed so even if you feed them and keep them happy they will not mate and will not produce offsprings.

We hope that in future updates there’s going to be a way to utilize them like making them into pack mules and be able to carry a big amount of items or be able to be mounted. 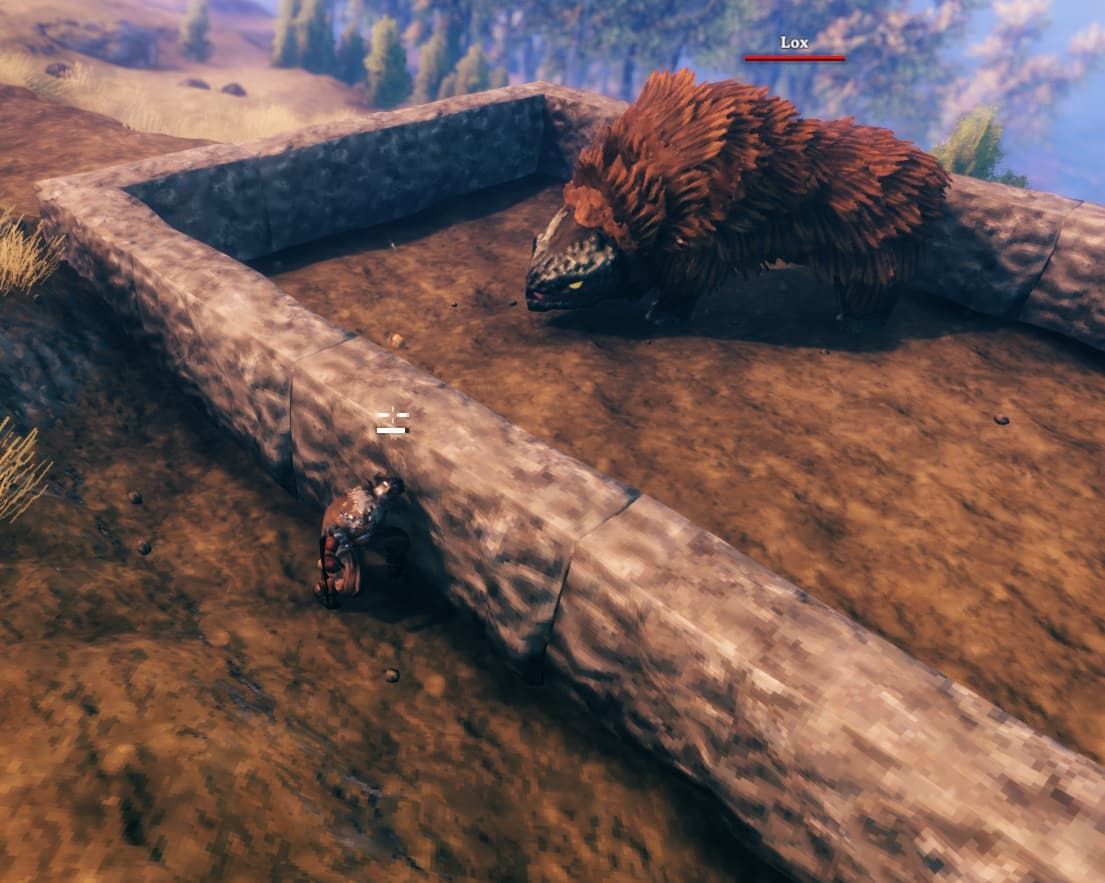 I bet the Lox is thinking that this cloudberry looks very delicious, Valheim.

An this is the end of the taming guide, right now these are the 3 animals that can be tamed, with Wolves being the most useful ones since they can follow and fight by your side, but also provide you with meat and hide.