Despite the somewhat limited Zombie library on the PS Vita, the few selected games are far more than enough to irrigate the zombie genre fans thirst.

The Ps Vita was ahead of its time despite what Sony did with it (shame on you Sony!), offering a decent library, especially for indie lovers. The Zombie genre was not an exception since the genre was flourishing during the last decade with titles and series that still hold ups to this day. The Ps Vita offers a fine collection of  Zombie games, covering both AAA games and indie titles.

Today we deliver you the best Ps Vita Zombie games you can afford, covering multiple genres such as top-down shooters, third-person shooters, survival horror, real-time strategies, and many more! 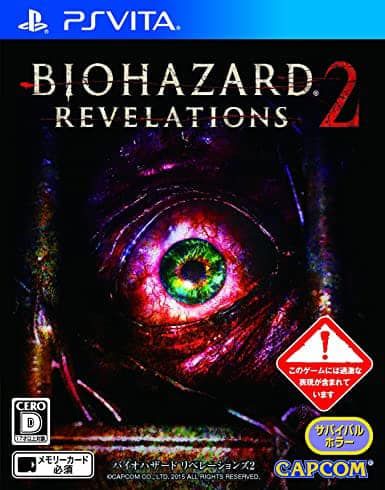 Resident Evil Revelation 2 marks the return of Claire as the main protagonist, Capcom tried to take the back to the roots with more survival horror elements. The game story is presented through separate episodes each telling the story of Claire or Barry Burton going back and forth in time between the events of Resident Evil 5 and Resident Evil 6.

The game is seen from a third-person perspective with an occasional over-the-shoulder camera when aiming. RE revelation offers four playable characters each with its own powers, for example, only two of the main playable characters can use guns while the others depend heavily on stealth to fight the mutants. Also, the player can use a decent array of weapons with the possibility of customization. On the whole, this title is well worth it if you’re not too sensitive to framerates drops since the Ps Vita port is a little bit rough around the edges. 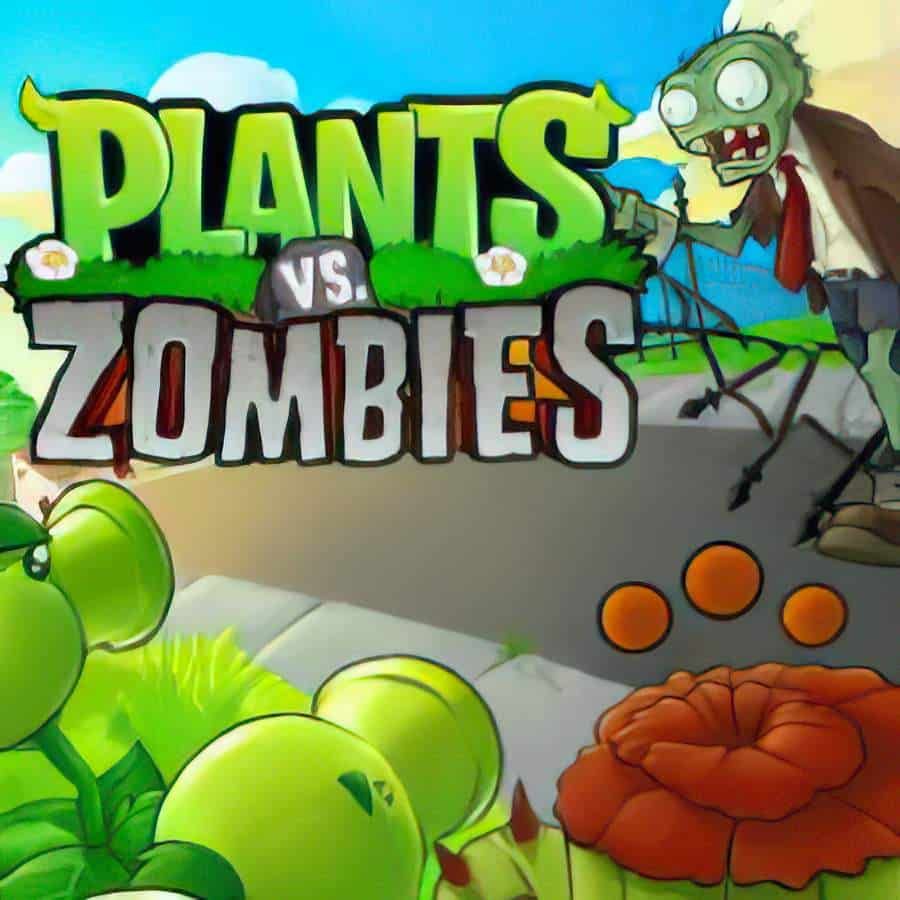 Plants vs. Zombies is a brilliant little game that might go under many gamers’ radar because of its cutesy and childish look. The game offers a fun tower defense experience with simple yet very engaging gameplay.

The player places a different type of plant on specific squares of the field, the plant starts to attack upcoming hordes of zombies to protect the field. Each plant type has a different style of attack including shooting plants, exploding plants, and blocking plants. Also, the attacking zombies are varied by type each with its own weaknesses. Unique to the Vita, players can use the touch screen to play the game just like the original game on phone. Overall, the port is nicely wrapped offering the full mobile experience with some cool additional mini-games and features. 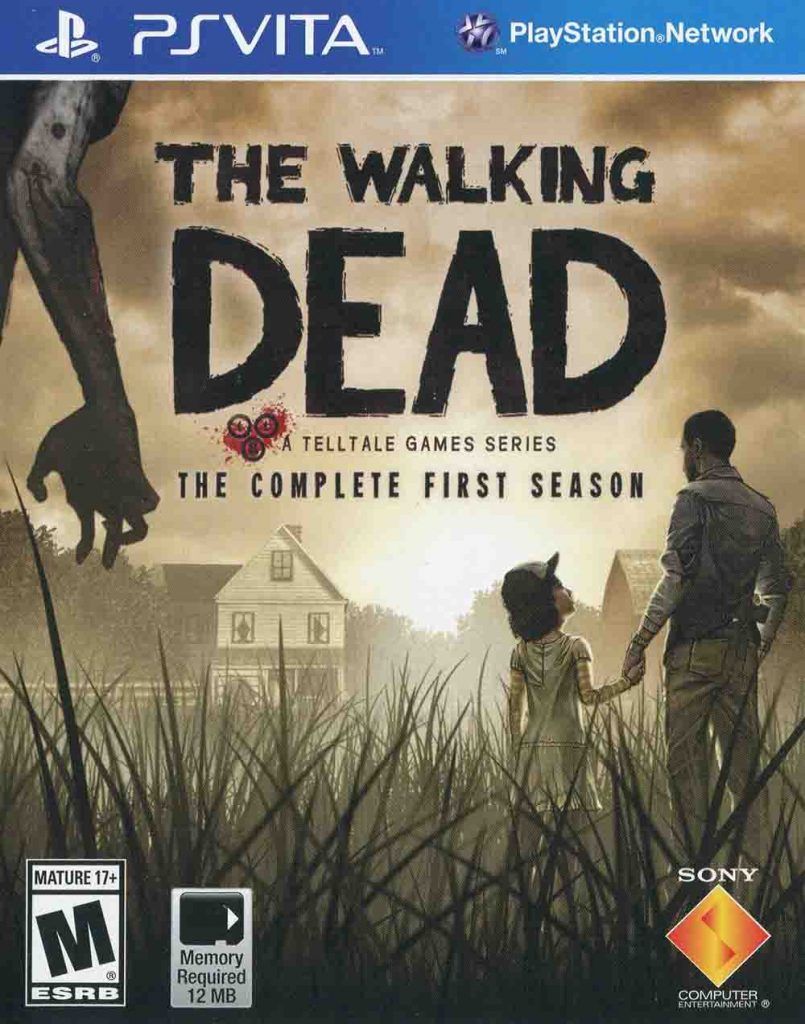 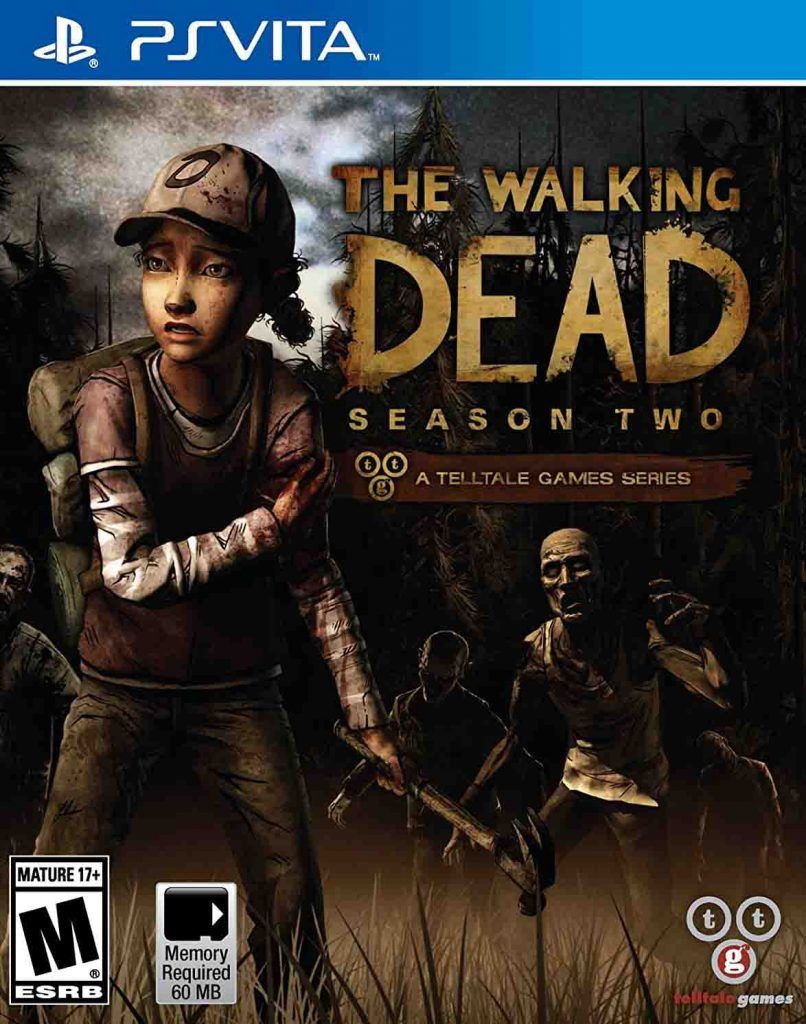 The Walking Dead season 1 and 2 is a story-driven interactive visual adventure game presented in a form of episodes. The game starts with Lee the main protagonist of the first season as Lee was taken to custody in a police car the vehicle crashes after hitting a walker, our hero finds himself forced to run off, and face this new apocalyptic world where walkers lurk around every corner.

Unlike many interactive adventure games that focus on puzzle solving, the game takes a different route focusing more on dialogues, making choices here will affect the course of the game, and believe me the game will force you to make some hard choices, story-wise this game is a masterpiece, offering the true feeling of a zombie apocalypse, and exploring the endless possibilities of ‘ what if ‘. On the whole, the PS Vita offers a decent port especially if you like gaming on the go this version does the work! 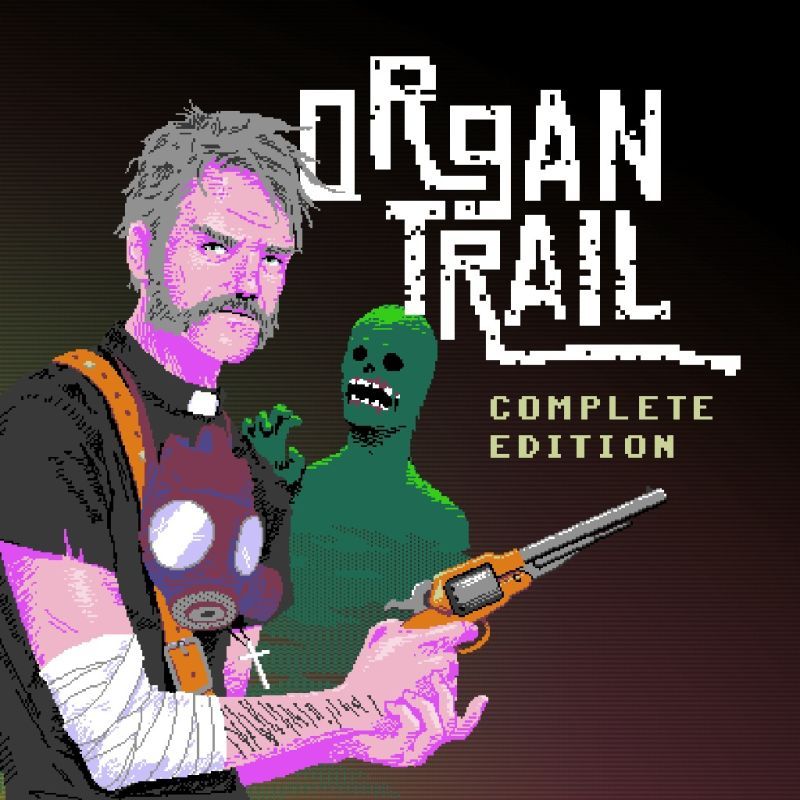 Organ Trail is a love letter to classic computer games, the games offer a truly classic feel with Atari-like graphics and a complex story to engage in. The story takes place in a post-apocalyptic United States. The player must cross the country safe and sane fighting off hordes of zombies and managing resources in the hope of reaching a zombie-free land.

At the beginning of every game, the player can choose a playable character each with its own unique survival skills. While the player scavenges for food and supply with his party random events might occur including positive and negative. For example, you might be attacked by hordes of zombies leaving your companions injured or even infected, or you can be ambushed by bandits after refueling and getting supplies. Overall, Organ Trail is an amazing experience despite the crushing difficulty dying in this game will always make you get back for more and more until you hopefully finish it. Corridor Z leans on the endless run formula to offer a good hybrid of both a good zombie game and an amazing endless runner. The player controls of one of several characters, the goal here is to simply run from the zombies while gunning them down or putting traps and hindrances on their way.

The game offers you different objectives to complete, these goals include shooting a number of zombies, picking up a specific number of rations, and many more. Completing these objectives allows the player to move on to the next day and unlock more video and audio logs to uncover the background of every character. In a word, Corridor Z is a fine port of an already good mobile game if you like endless runners this game is definitely worth a try on the system. 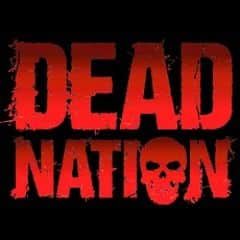 Dead Nation is an exciting top-down shooter that takes place in a zombie apocalyptic world. The game gives you the choice to choose between two characters male or female making your way through hoards of zombies on each level.

Dead Nation is entirely seen from a top-down isometric view, control-wise it’s a twin-stick shooter, most of the time you’ll be shooting at the incoming zombies but you also have the ability to use melee attacks in close range. You’ll start with a pretty basic weapon but through the course of the game you’ll be able to acquire more powerful and different guns, acquiring upgrades or new weapons require gold which can be found around the levels. Overall, the Ps Vita port is insanely good with solid framerates and decent graphics compared to the console releases, if you enjoy portable gaming this version is well worth it. Infected Wars is a third-person zombie shooter game. The player takes control of a special agent on a mission to uncover the truth behind a deadly virus turning United States citizens into cold-blooded zombie-like creatures.

The game is seen from a third-person perspective where the goal of each stage is to shoot out hordes of zombies while moving and looking for ammunition. The player starts with a pistol and expands further up in the game with more weapons including, automatic guns, sniper rifles, grenades, and many more. While the game might look a bit dated, since it’s a mobile port, Infected Wars is still a lot of fun if you don’t abuse it with long gaming session periods. Draw Slasher is a direct port of a well-known mobile game, since the ps vita has a fully functional touch screen the game is not any different from the original offering an almost identical experience. The player takes control of a monkey ninja slashing down hordes of Zombie monkeys.

The player moves his fingers in motion to slash down the upcoming zombies, including several types of zombies that have different attack types and hp bonuses. While the game might be on the short side, the creative boss encounters and additional voice acting on the Ps Vita make this well worth it. 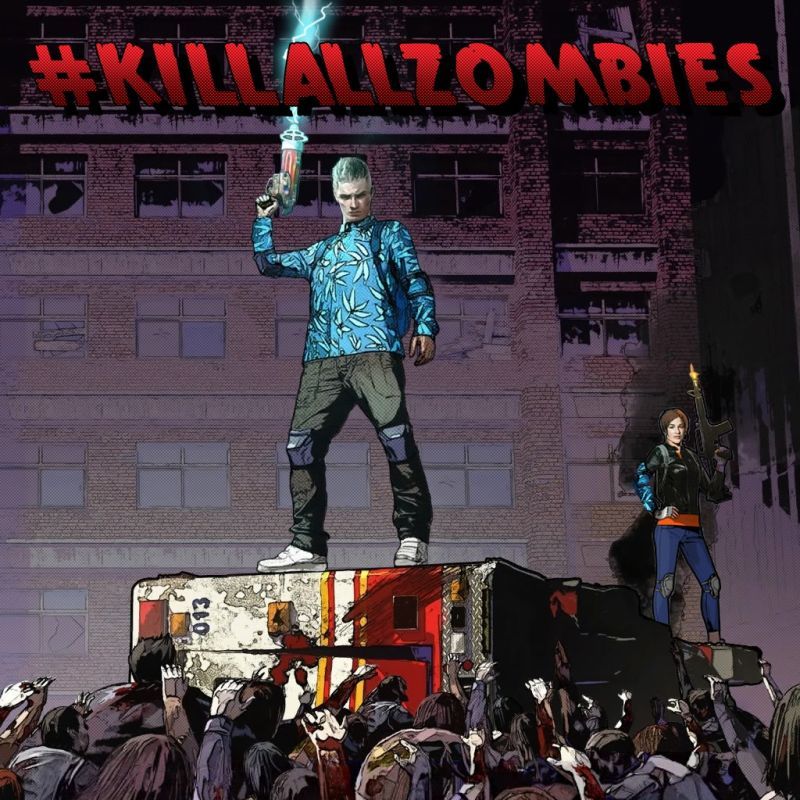 KILLALLZOMBIES is a fast-paced twin stick shooter. The player takes control of a mysterious protagonist who finds himself in the middle of a zombie apocalypse, his goal is to survive and kill as many as possible of the upcoming zombies.

The game is seen from a top-down view, allowing a twin-stick control layout. The player starts with a normal pistol, the longer you play the more guns you can permanently unlock, but that’s not an easy thing since everything in this game try to kill you. The floor has a hexagon shape pattern that raises from time to time challenging the player to dodge and shoot at the same time. Occasionally, cars will fall off the sky to try and take you out, destroying the car will help the player with extra hp and exp points. Overall, #KILLALLZOMBIES is a great endless shooter, despite the difficulty, the reward system will always make the player get back for more and more. 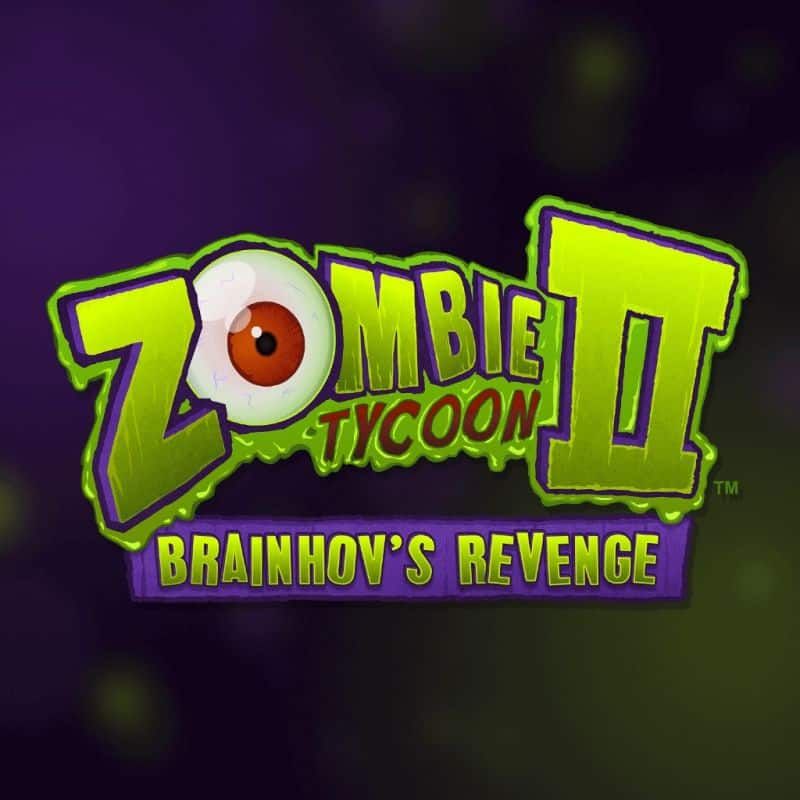 Zombie Tycoon 2: Brainhov’s Revenge is a real-time strategy game, the game is a direct sequel to Zombie Tycoon released previously on the PlayStation Portable system. You take control of a masked mad scientist who takes out on a revenge quest against his nemesis.

Different from previous games on the list the player will control an army of zombies, the player has the freedom to control the hordes of zombies at will, for example, you can order them to attack, defend and gather at will. The zombies are not all the same since they are divided into classes, for instance, samurai zombies are better at attacking the targets while engineer zombies are better at building and solving puzzles.  While the game might be a generic RTS, the beautiful graphic design and the witty storytelling makes up for it offering a solid game on the system. 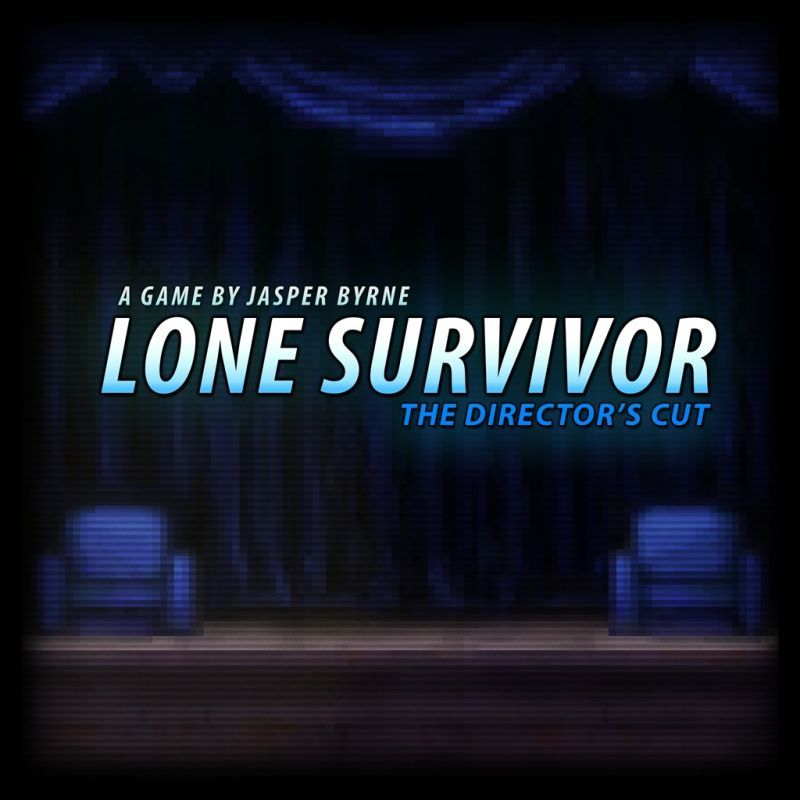 Lone Survivor started as a flash horror survival game and later found its path to modern consoles including the Vita. The player takes control of a nameless protagonist who suffers from hallucinations and must at the same time survive on his own in a world full of mutants.

When venturing outside of the shelter the player can find out various items including food, ammo, items, and keys. Certain items found in the game will serve as important keys to solving various puzzles during the game. Also, the player possesses a flashlight and a gun to help him navigate the environment, mutants are always lurking in the corners, the player can avoid the monsters or engage them using different weapons. While the game focuses heavily on the gameplay elements, a story is also there to enrich the experience, interacting with different characters and places will eventually lead to an ending that depends on the player’s choice during the playtghrough. 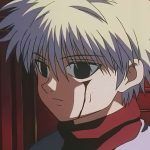 A casual gamer who loves everything Nintendo, and swears by arcade racers, platformers, and hack 'n slash games.