Zombie game’s popularity has been rising to this day offering a wide range of genres and satisfying many fanatics, especially horror fans.

The mighty PlayStation 4 didn’t disappoint with some of the greatest Zombie titles to date. The next-gen PS4 hardware allowed the developers to tell complex stories with high-end cinematic visuals, and amazing gameplay graphics. 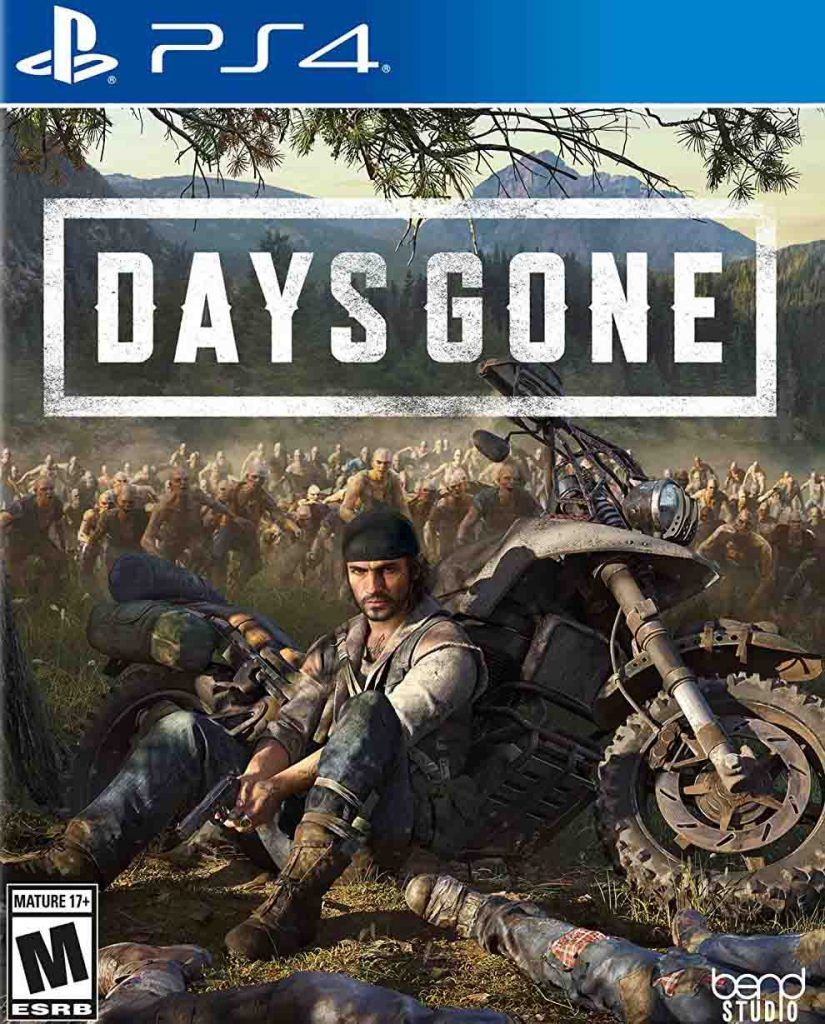 Days Gone is an open-world post-apocalyptic survival third-person shooter game. The game takes place two years after a mysterious disease swept the world killing most of humanity, and turning them into zombie-like creatures known as Freakers. The player takes control of Deek a former us army soldier, after the pandemic Deek work as an outlaw mercenary completing the request of other community and gangs in exchange for supplies.

The world is completely open allowing exploration and gathering of resources to craft new weapons and supplies, the player can complete an objective in multiple ways including stealth or going full blast.  Also, a huge variety of weapons can be used and crafted through the course of the game including pistols, rifles, explosives, and traps. Overall Days Gone is a great game for survival zombie games fans, and also a great introduction to show what the PS4 hardware is capable of. 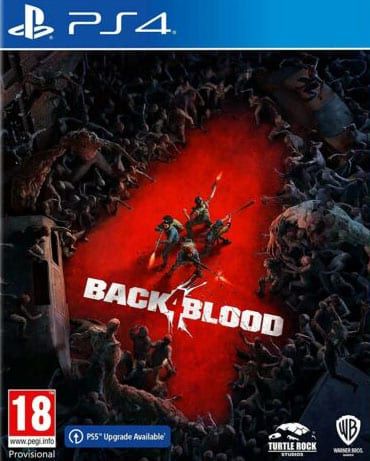 Back 4 Blood is a first-person zombie shooter game, the game takes huge influence from Left 4 Dead borrowing a lot of elements from the game. Back 4 Blood takes place in a post-apocalyptic world swarmed by zombie-like creatures known as The Ridden, you play as one of a group of survivors trying to survive this mess.

Just like its spiritual successor the game offers a cooperative mode, allowing up to four-player to fight off hordes of zombies in different locations. The game features up to eight predefined playable characters with different abilities and stats. New to the game is the cards feature, these random cards offer the player a rogue-like experience changing gameplay features on every level. Overall, while the game doesn’t meet the classic left 4 dead greatness, it’s still a great co-op game to play with friends and family on a good Friday night. 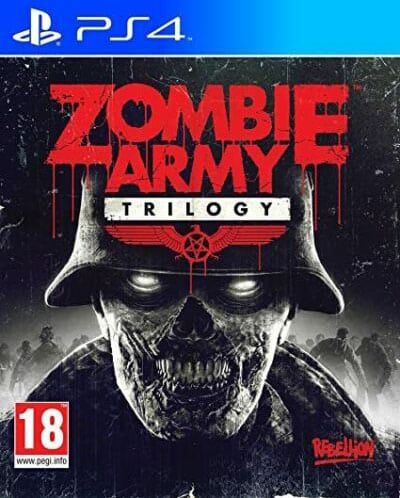 Zombie Army Trilogy is a third-person zombie shooter game, think of this game as a straight sniper elite game with zombies. The story starts with Hitler on the verge of losing the war against the allies, desperate with the outcomes of the war, Hitler launches the last plan, plan Z unleashing an army of Nazi zombies.

The game can be played offline solo or online co-op with up to four players on the same game. Three-story campaigns are available to take on as well as the endless horde mode, up to eight playable characters are available from the beginning including males and females, also you can choose weapon type and explosive to take on with you at the beginning of every level. The levels design is decent offering a dark atmosphere with an almost black and white color palette and a foggy environment. Overall this is a great game especially if you enjoyed the Sniper Elite series this is exactly the same concept, replacing soldiers with Zombies.

The Last Of Us is a story-driven third-person action-adventure game, the story follows Joel and Ellie two survivors fighting their ways through a harsh post-apocalyptic world filled with infected Zombie-like creatures and brutal gangs fighting for resources and authority.

The game is a third-person shooter with additional stealth elements, the player roams around a post-apocalyptic world filled with zombie-like creatures and unmerciful human gangs, graphic wise the game offers a stunning and beautiful game environment, the combat system consists of using firearms, melee, and stealth method, enemies are mainly humans and infected Zombie-like creatures. While the game was originally released on the PS3 the PS4 got an enhanced port allowing 1080p resolution, 60 fps, and upgraded texture and shadows. In conclusion, the remastered version on the PS4 is the definitive way to play the game especially if you missed the PS3 version.

Resident Evil 2 is a third-person survival horror game, the game is a remake of the well-known Resident Evil 2 released on the PS1 back in 1998.  The story takes up right after the first resident’s evil game events, the player takes control of two main protagonists a rookie officer named Leon and a young college student named Claire. Together they attempted to escape the fictional Racoon City which has been overcome by the T-virus turning most of the city’s population into zombies.

Unlike the original game, this remake removes the tank controls, replacing them with an over-the-shoulder third-person view, making the game lean more over late fast past action-oriented resident evil games. The gameplay consists of clearing rooms from zombies, collecting resources, and solving puzzles. While the first game was known for its difficulty this remake gives the player the choice to lower the difficulty allowing aim assist and infinite saves. Generally speaking, the RE 2 remake is well worth it, offering both a fun ride for veterans and a good introduction for newcomers. 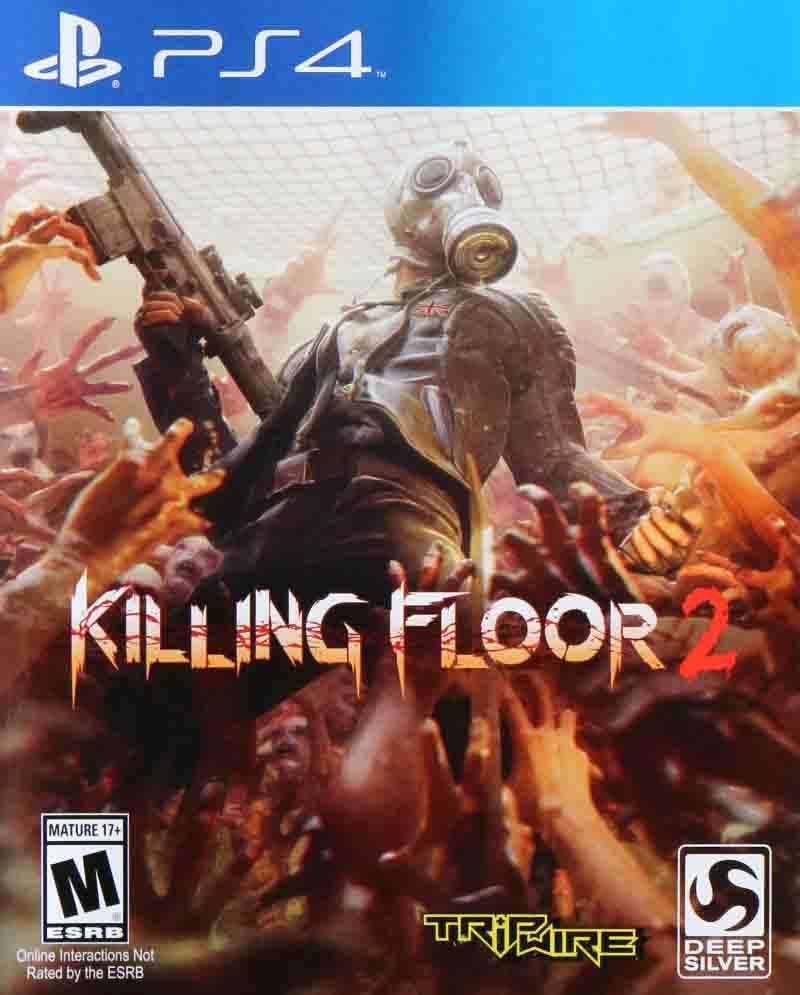 Killing Floor 2 is a first-person zombie shooter game, the game is a direct sequel to Killing Floor released in 2009. Story-wise, the game follows the event of the first game, the player’s descent into Europe after a virus outbreak turning people into zombie-like creatures. You take control of one of several mercenary survivors trying to survive the situation.

The game can be played solo but better be played co-op as it was meant to be, up to six players can join, fighting off waves of zombie-like creatures varying in sizes and abilities. The levels take place in several Europe locations including Paris, England, and many more. There is a huge arsenal of weapons to use mostly fictional similar to Resistance weapons. On the whole, Killing Floor 2 is a fun online co-op game mixing some of Left 4 Dead and Resistance elements, delivering it into a nicely wrapped package. 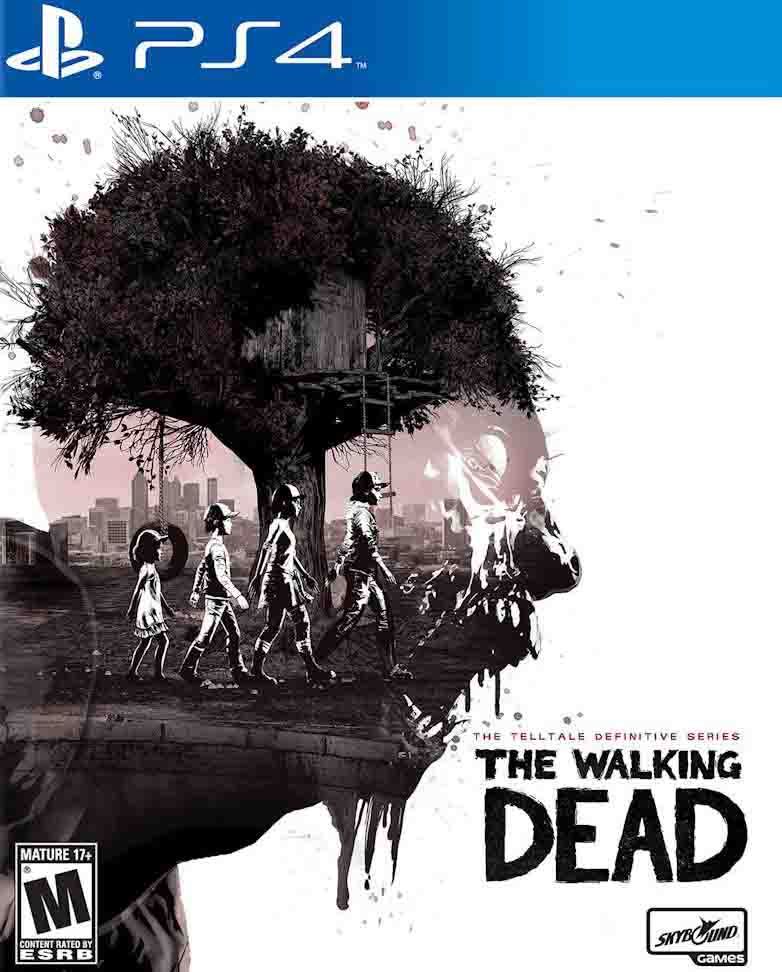 The Walking Dead Telltale Definitive series is a compilation of story driven point and click adventure games, the game includes all four seasons, DLC, and Michonnes spin-off all in one with remastered graphics and enhanced frame rates. The game starts with Lee the main protagonist of the first season as Lee was taken to custody in a police car the vehicle crashes after hitting a walker, our hero finds himself forced to run off, and face this new apocalyptic world where walkers lurk around every corner.

Unlike many interactive adventure games that focus on puzzle solving, the game takes a different route focusing more on dialogues, making choices here will affect the course of the game, and believe me the game will force you to make some hard choices, story-wise this game is a masterpiece, offering the true feeling of a zombie apocalypse, and exploring the endless possibilities of ‘ what if ‘. If you went asleep on this the Ps4 compilation is the definitive way to play this for the first time or even replay it for the sake of nostalgia. 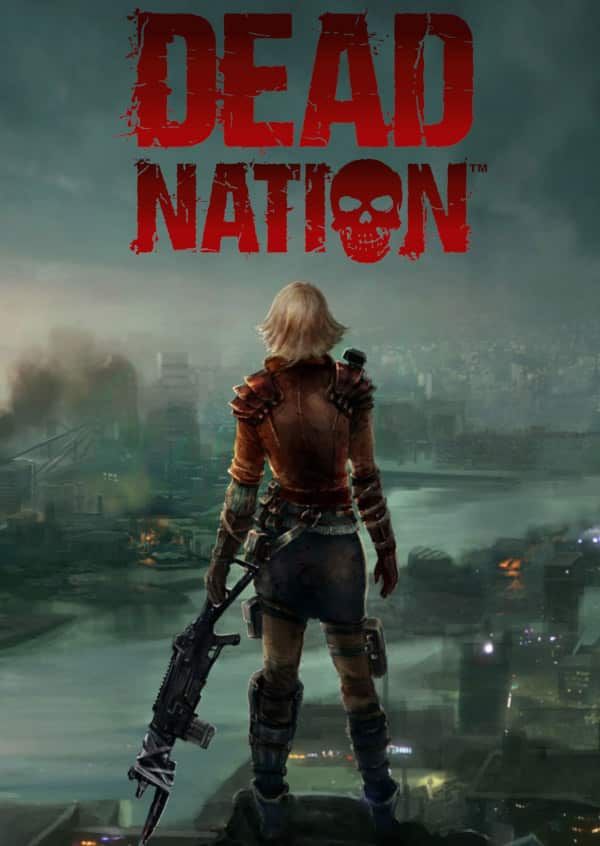 Dead Nation is an exciting top-down shooter that takes place in a zombie apocalyptic world. The game gives you the choice to choose between two characters male or female making your way through hoards of zombies on each level.

Dead Nation is entirely seen from a top-down isometric view, control-wise it’s a twin-stick shooter, most of the time you’ll be shooting at the incoming zombies but you also have the ability to use melee attacks in close range. You’ll start with a pretty basic weapon but through the course of the game you’ll be able to acquire more powerful and different guns, acquiring upgrades or new weapons require gold which can be found around the levels. In conclusion, this is a very good arcady twin-stick shooter, especially for co-op seekers as it can be played online or couch co-op.

World War Z is a co-op third-person zombie shooter, the game is set in the same world as the movie holding the same name. The story revolves around a group of survivors trying to make it through a zombie apocalypse taking place in several cities around the world including New York, Tokyo, Marseille, and many more.

The player takes control of one of the survivors, with up to four players in total, the goal on each level is to fight hordes of zombies, using weapons in your arsenal. Up to seven classes are available each with its own abilities and advantage. Items can be collected through the course of the game, with a reward system showering players with new supplies at the end of each level. Visually the game looks awesome on the PS4 pushing the hardware to the limit with up to 1000 zombies on the screen simultaneously. Overall, this is an awesome co-op game especially playing with friends.

Dying Light is an open-world first-person survival horror game, the game was considered as a spiritual successor to the Dead Island series. The story revolves around Kyle Crane an undercover agent sent to infiltrate a middle eastern city called Haran, the city was quarantined due to a mysterious virus spreading across the citizens turning them into zombies.

Dying Light is entirely open-world seen from a first-person perspective, the gameplay focuses on weapon-based combat mostly melee with additional parkour elements to avoid hordes of zombies. A whole day and night cycle is also a key element in the game, during the day the zombies are mostly slow and sluggish, but fast and fierce during the night. Up to 100 weapons can be crafted through the course of the game using supplies spread across every region you visit. Also, a leveling system is available, by gaining experience via quest, combat, and side quests. The player can upgrade his abilities and skills using a skill tree system. Overall, Dying Light is a great successor to Dead Island series, may be better in many aspects compared to Dead Island if you enjoyed the first one this game is worth it! 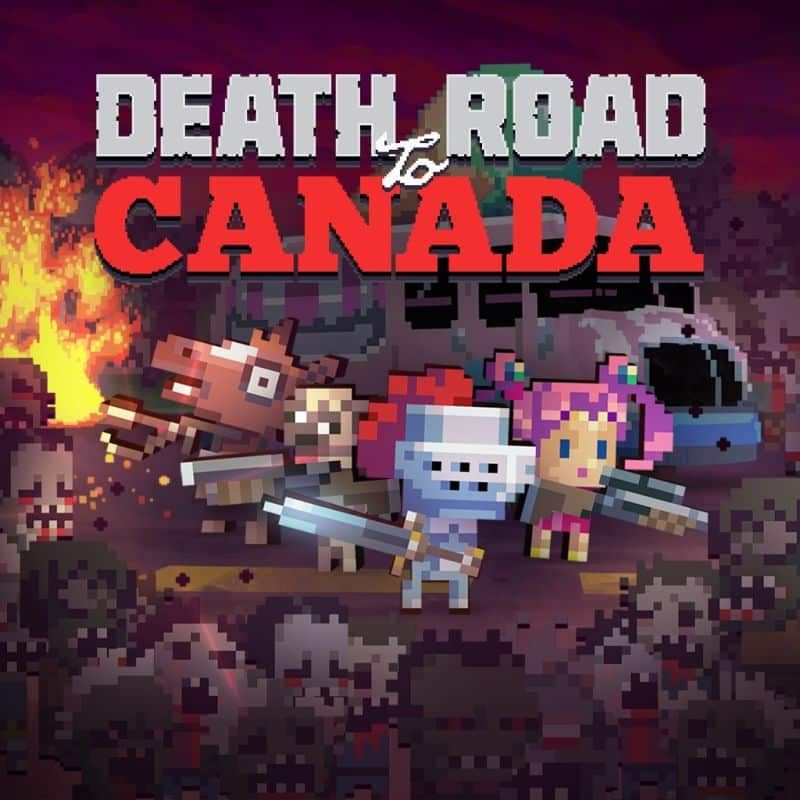 Death Road To Canada is a rogue-like road trip game, the goal of each game is to try to reach Canada running from America which has been overrun by zombies. You take control of a survivor trying to reach out to the borders, every event occurred is randomly generated including recruiting new guys into your party, sudden zombie attacks, party members getting sick, and many more.

Up to four-player can join your party, with all of them having different skills, mood levels, and their own personality. Through the course of the game, random events could occur leaving the player to make a decision. The player’s decisions could affect the party’s mood and supplies. All things considered despite the game’s simple visual, the brilliant idea leave the player with multiple choices and endless outcome, encouraging the player to get back after each playthrough for more.