All Xbox Consoles in Order of Release (8 Models & 4 Generations)

Going into your first T1 Node War without the proper build won't be a pleasant experience in BDO, so make sure to gear-up like the pros do!

It’s not a secret that all the guilds in gear-capped environments are maximizing percentage base stats such as down attacks, critical hit damage, back attack damage etc. This is easily achievable with Chimera’s Pupil Gems, Kaia Necklace and PRI+ Ultimate Rosar offhand. The goal of this article is my attempt on improving it further, but not to the obvious extent of running expensive elixirs that are extremely hard to get.

I strongly suggest you to create an alt character specifically for this build as it does not have any other purpose aside from Tier1s. The gear is fairly cheap considering all the seasonal rewards and making it less of a burden of constantly swapping gear and crystals.

I am inviting you to take part in optimizing the build and feel free to communicate any improvements!
The build most likely will have slight changes depending on game updates and your feedback, so make sure to check it out from time to time.

Observing the stat limits we note that Special Evasion Crystals in armors are obsolete. We will replace them with something much more useful.

AP Limit includes your ALL AP (with bonus brackets) and Extra Damage to Humans. Damage Reduction Rate Limit is achievable with at least 248DP and 263DP respectively. We will focus first on Easy difficulty level of Tier 1 Nodewar build and then modify it to meet Medium constraints.

The Damage % modifiers are uncapped.

My subjective priority of stats to maximize in descending order is:

With the following gear, crystals and buffs you should have around 4500 HP at nodewar start, which is 500HP less than someone with HP crystals, but that will only last for 20 minutes before your HP-bars will become equal.

While we are discussing gear might as well mention important addons that you must have:

Link to the build: https://garmoth.com/character/Dm43Y2z0jn

Our crits on downed target would deal:

Let’s compare it to a non Tier1 build without any buffs. 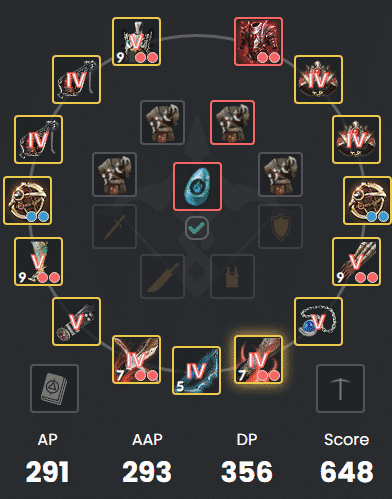 The same attack would deal

The increase is insane!  Also, it’s worth noting that All Special Attack Extra Damage is the King. It appears twice in the damage formula; once for Crit and once for Down attack, making it the most important damage modifier.

I will list all relevant gear pieces and buffs along with explanation.

Following crystal set up leaves us little to no wiggle room. We have exactly 20% ignore resists without Elkars/Precisions, meanwhile maintaining at least 4500 HP in the first 20 minutes and have larger Stamina compared to most players.

If for some reason you did not commit fully to this build and have more than 20% ignore all resists pick.

There is only one choice for Artifact, simply because nothing is better. You want as much as possible %-based modifiers depends on what you need the most. If you rely on Down Attacks the most pick [Crocodile’s Tooth]. If you want pure damage without relying on special attacks as much, get [Target Openings].

I play and stream Black Desert, main Archer since it's release. Grinding and spreadsheets are my passion. Former officer of the strongest Tier 1 medium guild - Lunacy and now I am Guild Master of FunHub on EU.